Pasta with Clams in a Lemon Wine Broth 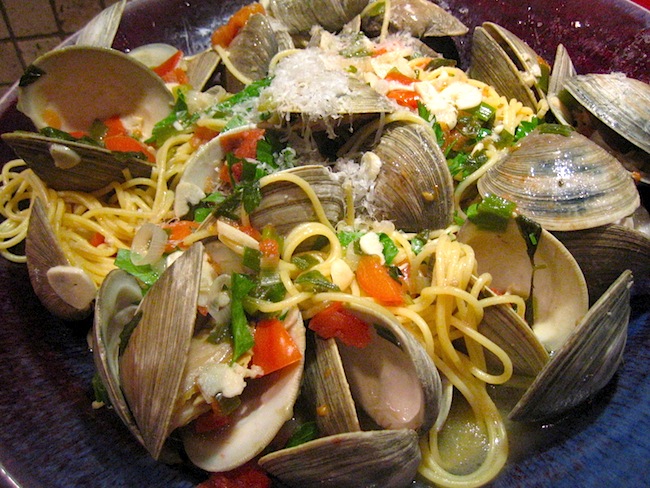 I grew up eating very simple meals that were repeated often in the course of a month. It was good food, but never complicated, and very little seafood was prepared — that is except for the flounder my mother purchased in somewhat thin, brick-like frozen packages.  The flounder was thawed, the fillets pulled apart, then floured and fried.  It wasn’t an unpleasant meal, it just wasn’t anything special and I rarely looked forward to those meals.  It must have made an impression on me, because I don’t believe I’ve ever fried flounder for my family.  Not that I have anything against flounder; I’m just aware of so many more possibilities with respect to seafood.  I also believe the choices are more abundant for the home cook which makes cooking and eating far more pleasurable than ever before.

My boys have grown up trying just about everything imaginable — especially my youngest, now 15.  That is most likely because I’m not afraid to try new types of cuisine, new flavors, and trust that if a recipe has been published, it has at least a fighting chance of being “good.”

Many summers ago, my husband, youngest son and I traveled up the California coast to Monterey, one of our favorite places.  Along the trip, we stopped in Santa Barbara for the day, and had lunch at a pleasant Italian restaurant.  Surprisingly, my son, who must have been only eight at the time ordered mussels.  I do remember that they sounded delicious with garlic, white wine, and basil being a few of the ingredients, but I’d never made mussels before.  And to my knowledge, we’d not ordered them in a restaurant with my son along.  So, order we did!  He truly enjoyed them, and we enjoyed watching him eat them.  No sooner than we’d arrived in Monterey, he ordered more, and to our continued surprise, made comments about liking the mussels he’d ordered in Santa Barbara more.

To some extent, I’d like to take some credit for this.  Only one of us has serious food allergies, so meal time at our house has always been an adventure, and clearly my boys (and husband) have grown from the experience.

After returning home from our vacation, I began to look around for recipes to emulate the dishes my son had tried.  There was just something about cooking my own shell fish I wasn’t too comfortable about.  Maybe admonishment from experts on freshness, and concerns about resulting illness could have been a factor.  Possibly, but not nearly as much as walking past the local chain grocer’s “fish” counter and smelling the pungent odor of ammonia mixed with fish clearly anything but fresh was more of a deterrent.  And the selection?  Pathetic if at all existent, and not something I’d consider.  Ever.  Completely disgusting.  Truly fresh fish rarely smells fishy.

That was about the time I discovered Whole Foods and sea food that was refreshingly sans the fishy odor.  I then found a recipe that is probably the one I’ve made more than any other recipe (remember I have that problem of rarely making a recipe more than once — ever):  Spaghetti with Fresh Clams, Parsley, and Lemon.  I found it in an issue of Bon Appetit I still have and cherish — one of the issues that focuses on a particular region’s food, and in the case of this recipe, the citrus from the isle of Capri off the coast of Italy.  And wouldn’t I absolutely love to travel there some day…*sigh*  I have served it in enormous platters at parties to the oohs and ahs of guests, as a main dish with pasta, as the original recipe calls for, and as a starter to a nice dinner.  I’ve used mussels — black and green lip, which are completely gorgeous, by the way — a variety of clams, and a mixture of both.  I’ve used basil instead of parsley, added chopped tomatoes, and dolloped goat’s cheese to sharpen the broth.  Any way this recipe has been made has delivered very pleasing results.  If given a choice, my husband prefers clams, and my son, mussels.  I don’t care, because both are excellent as long as I have a thick chunk of bread to soak up the broth remaining in my bowl.
So the days of avoiding fish at the chain market and denying ourselves a meal of delicious seafood are over.  Not too far from our house, El Pescador sells fresh seafood.  It’s a small store packed with mouth-watering possibilities. It’s also a restaurant, and from the looks of the menu, one that serves quite tasty fare. I’ve not been there often, but have discovered that if I purchase my clams there, I won’t fill my basket with the other lovely items that find their way onto my shopping bill at Whole Foods.  So I’ve added another trip, but it’s worth it, because El Pescador sells lovely, fresh seafood.  Perfect for summertime.

The original recipe  for this Pasta with Clams in a Lemon Wine Broth is linked above.  I’ve included my revisions in the recipe below. 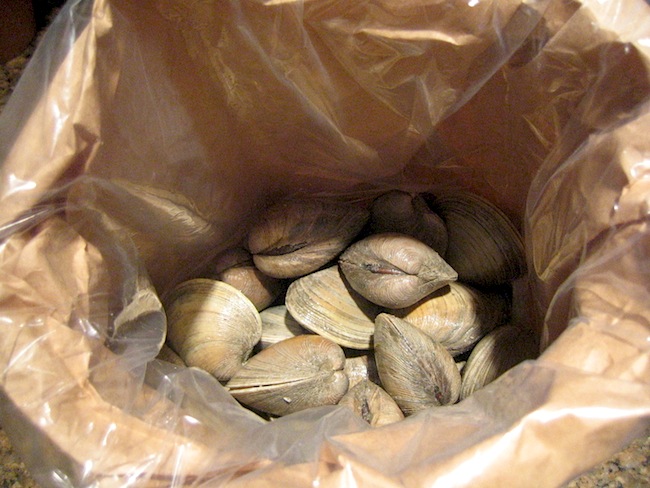 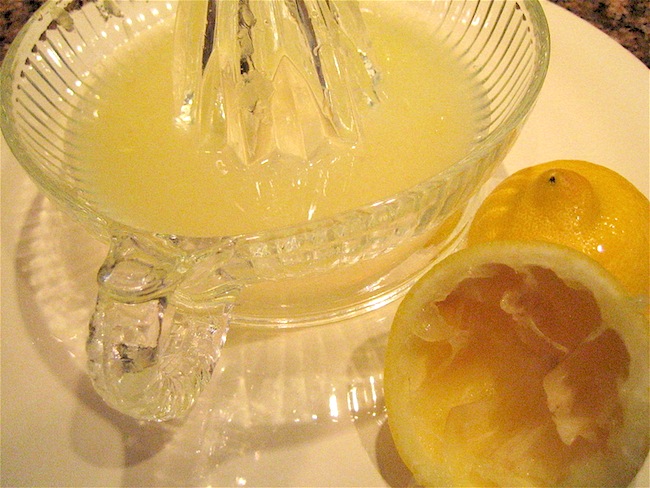 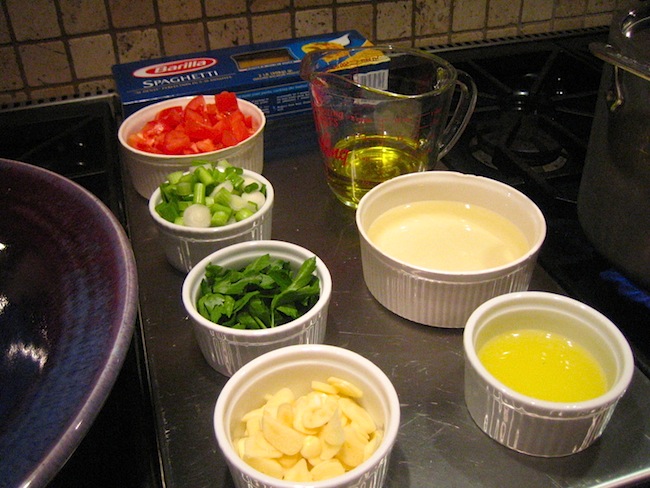 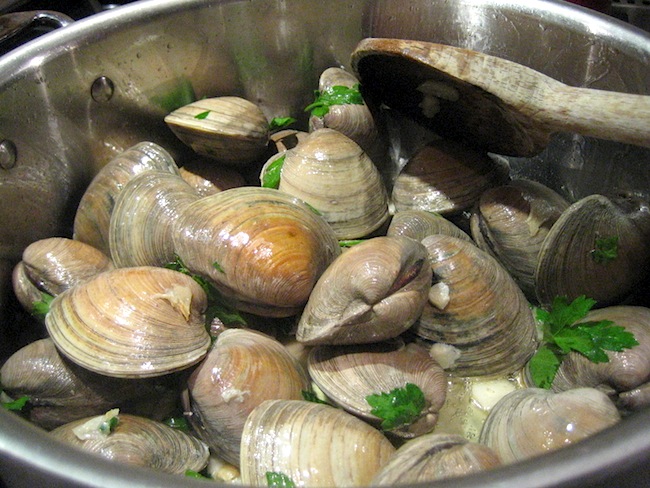 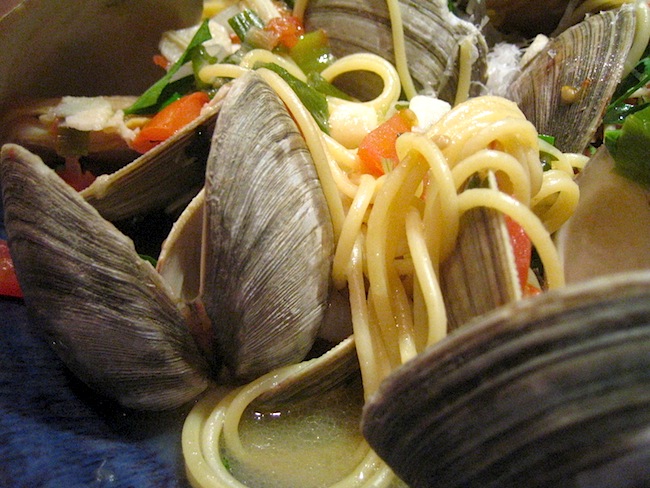 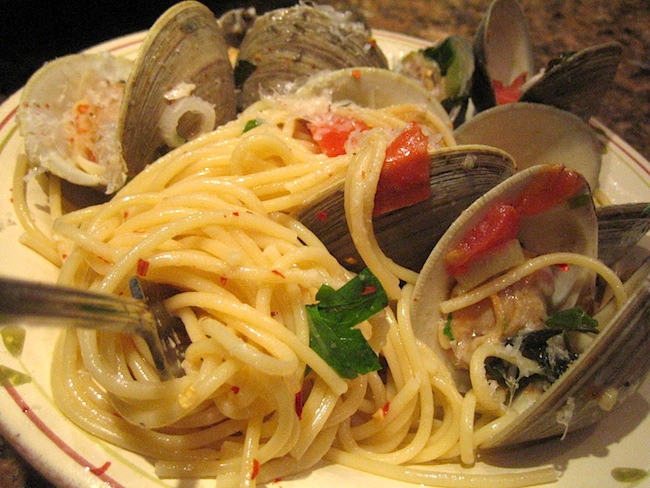