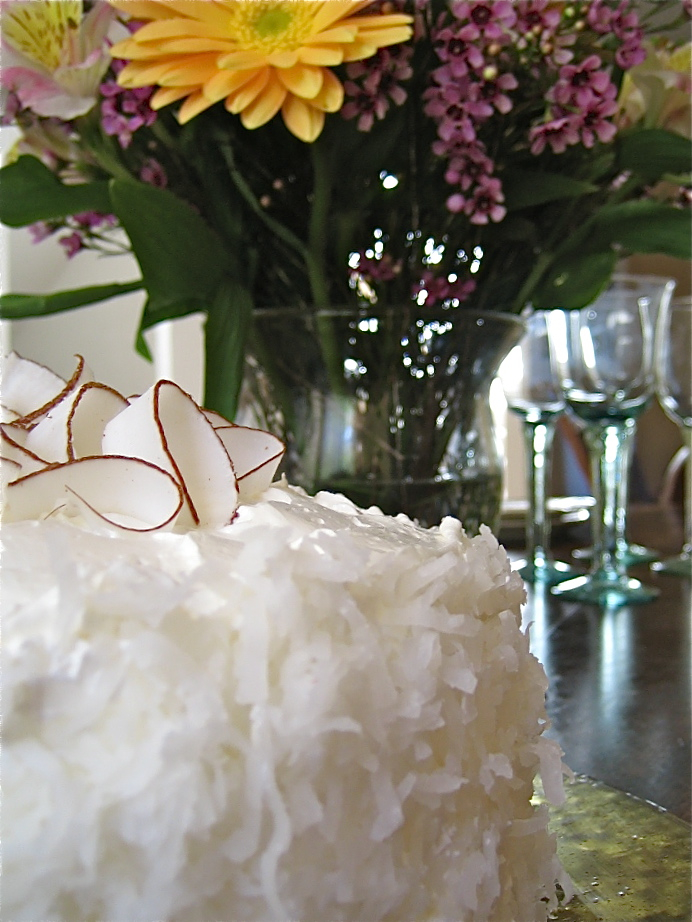 When I read that we would be digging into one of Dorie Greenspan’s cake recipes, I couldn’t resist a smile.  And as I read deeper into the recipe and saw the possibilities, I knew I’d enjoy imagining what could be done with this cake, the Perfect Party Cake: pure white, multi-layered, and frosting that hints of whatever I’d like it to…But then a funny thing happened.

I remembered a photo of a white cake covered with coconut and filled with lemon in my mother’s old cookbook — one that I’d imagined for years would be mine and never was.  My heart was broken.  *sniff*   So I knew I’d most likely stick very close to Dorie’s recipe.  The idea of the lemon and the coconut was more than I could resist, and I just happened to have some blackberry jam.

I’m not like many of the other Daring Bakers I come across, and goodness knows there are about ten trillion of them in FoodLand now.  I’m always in awe of those who hop to each challenge, making it nearly before the web has cooled from its reveal to our masses.  And some bake their hearts out more than once on a challenge, experimenting and diligently learning.  It’s quite admirable.

I usually wait until the last minute.  It’s not because I’m not interested.  FAR from true.  I seem to wallow in all the possibilities, imagining what each challenge might bring.  Clearly I’m a process kind of person.  But I’m proud to say that on this challenge, I actually finished the cake more than a week ahead of time and it’s been burning a hole in my pocket ever since.  Or something like that.
I would trade my world for a piece of that amazing cake right now.  And I don’t just say that about any cake.  This cake was amazing.  Period.  And when I think back on all the Daring Baker challenges I’ve been a part of in the past year, this was the best.  I loved making this cake.  Okay, so peabody’s Strawberry Mirror Cake was a very close second.  But still.

Maybe its wonderfulness was a reminder of childhood.  You know — the long denied poor child whose mother never made that luscious coconut covered cake in the Betty Crocker cook book whose page I can no longer find because it was possibly drooled  on into oblivion.  Of course, I should mention that she gave in and did make the Baked Alaska once, perhaps as a consolation, and most likely because I’d brow beaten her for years over it all.  But the coconut cake….with lemon filling between the layers.  Mmmmm….

I’ll have to ask her why she never made it.  Was it the coconut?  Hmmmm…which finnicky family member may not have liked it and so I was forever denied?

So this was my chance.  After all these years, I’d finally get to see what my taste buds would think.  And yes, I do know that after our Lemon Meringue Pie challenge a few months ago, there’ve been quite a few confessions out there about people not particularly liking lemon.  How sad.

It’s such a bright, clean, cheerful flavor.  So fresh.  So…but I do understand, because personally, I’ve never cared for beets. Ugh.  They’re just so…red.  And rooty.  Except when they’re yellow.  But they’re still rooty.  Ahem.

I know.  You’re so over this already and you have 8,000 other blogs to read and all you really want is to see the photos.  You seriously want me to get on with it already.

But it’s my birthday!  Well, actually, it’s my blog’s birthday.  Sass & Veracity was one year old as of March 19th, and so clearly, getting to bake such an amazing cake was perfect!  I can totally tell you’re bowled over with enthusiasm on this news.  w00t?  Think of how difficult it was to not post this cake on my bloggoversary.  I was tempted.  Really, I was.  But the thought of the scandal was more than I could bear, posting ahead of the day…I’m such a rule follower.  Well except for the Lemon Meringue Pie challenge when I cheated on the meringue.

Okay, I’ve blathered long enough.  Credit — tons of it —  for this fabulous challenge choice goes to Morven of Food Art and Random Thoughts.  There seem to be quite a good number of happy bakers in FoodLand about now.  Nice.  If you’re interested in the recipe for the Perfect Party Cake, consider purchasing Dorie Greenspan’s Baking:  From My Home to Yours.

And to keep in the spirit of challenge (because this cake was a delight to make) I’ve decided that since having read that Dorie admires a “neat cook” while skimming blogs one day, I vowed to keep my work area and kitchen clean while I was baking to my heart’s content this month just to see if I could.  Although I usually begin in an organized fashion, by the end of whatever I’m cooking, disaster reigns afterward. 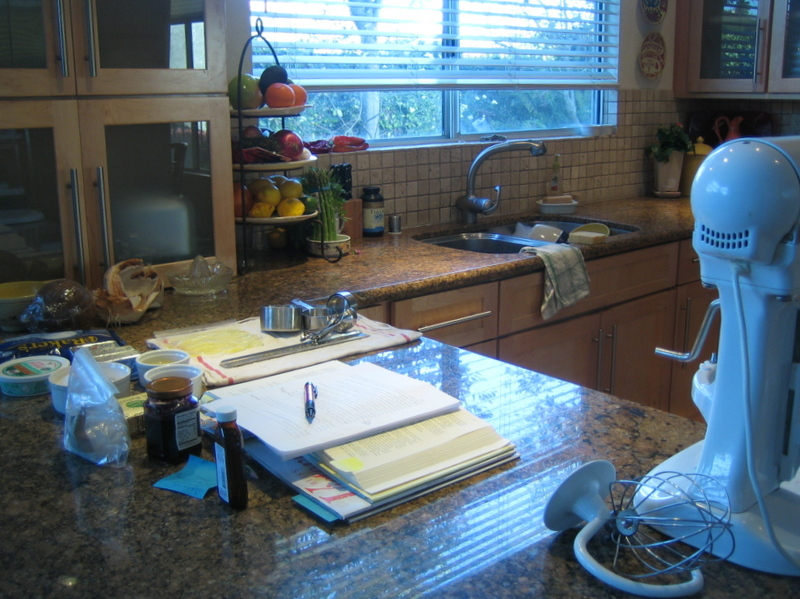 I do have to say in my own defense that we celebrated Easter on Saturday and although I did make the cake on Friday, I prepared the frosting and assembled the cake on the same day I was also baking a whole ham, with all the trimmings of a complete dinner and family arriving at about 2 PM. So please, at this point, notice my clean kitchen.  I promise to show you the disaster at the end.

I also decided to experiment a bit with coconut, since I’m a big fan, and this was my chance.  I was prepared with a bag of sweetened coconut, as well as two fresh coconuts just to see what the possibilities might be.

My Notes about the Perfect Party Cake 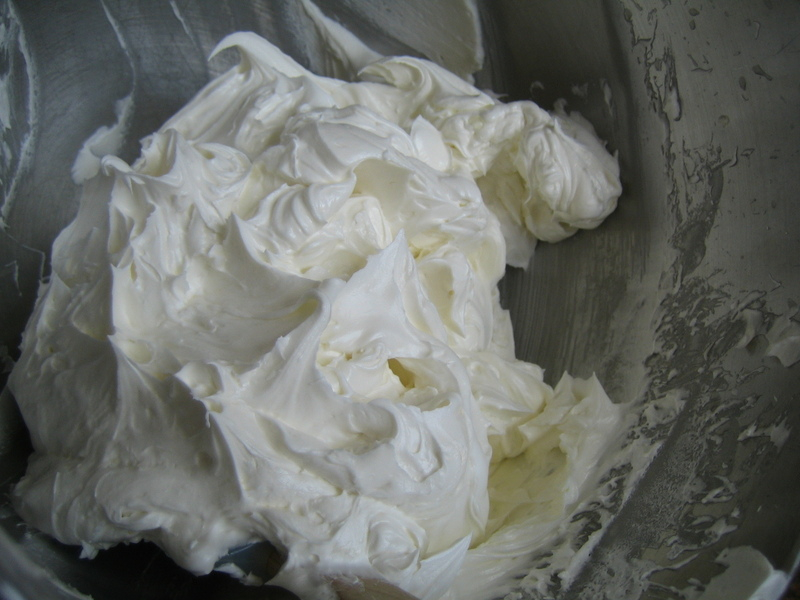 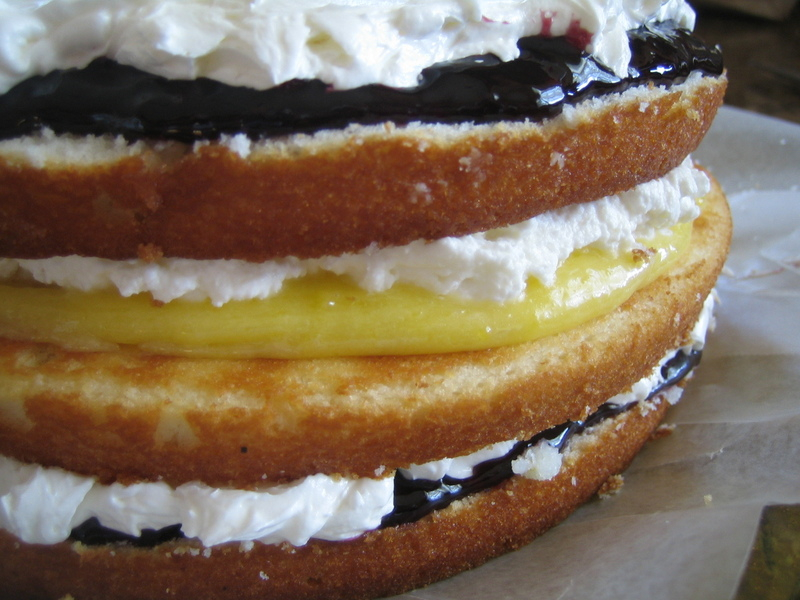 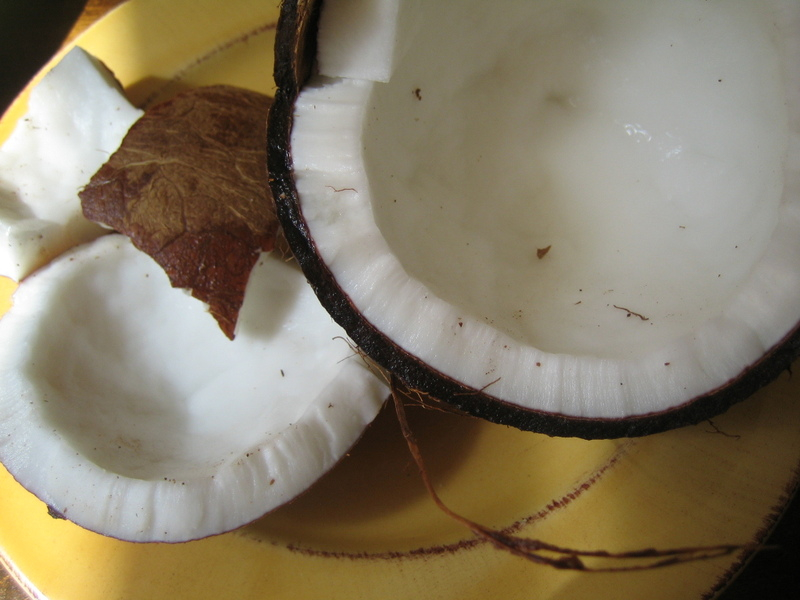 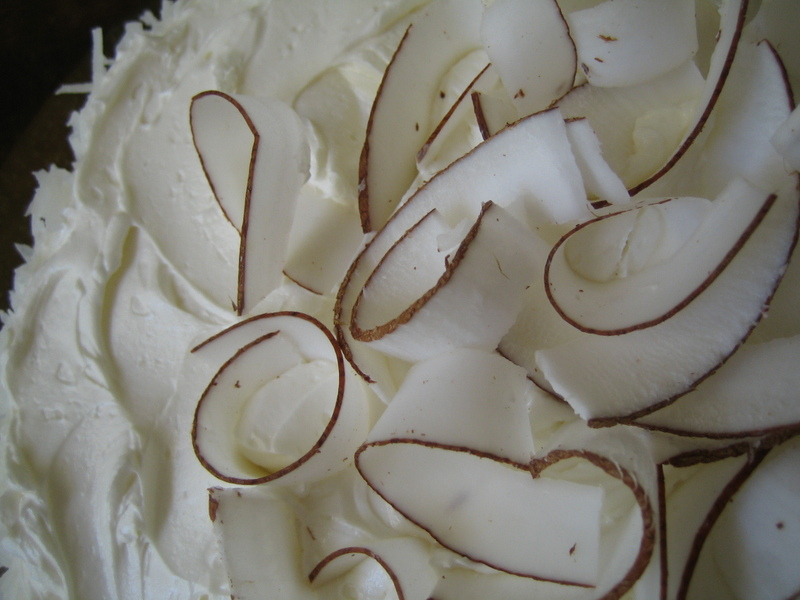 Dorie’s Perfect Party Cake was a hit.  My hunkster doesn’t like sweetened coconut, but admitted that this was good.  Other family members said they enjoyed it as well, but I didn’t have to peel them off the ceiling, so I guess I’ll have to live with “okay.”  When I asked my hunkster why he didn’t like coconut, expecting that he’d say he didn’t like the sweetness, he said it was stringy.  Goodness.  Now I’ve heard everything. 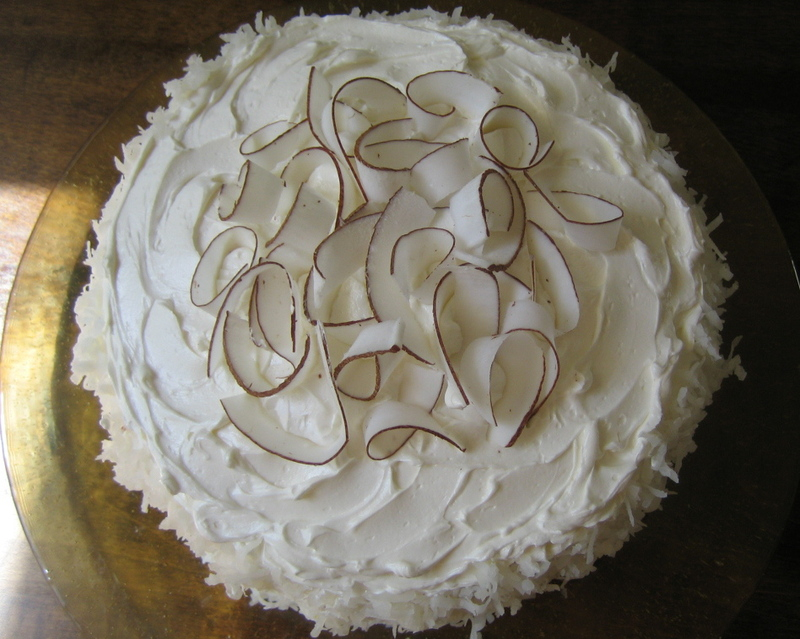 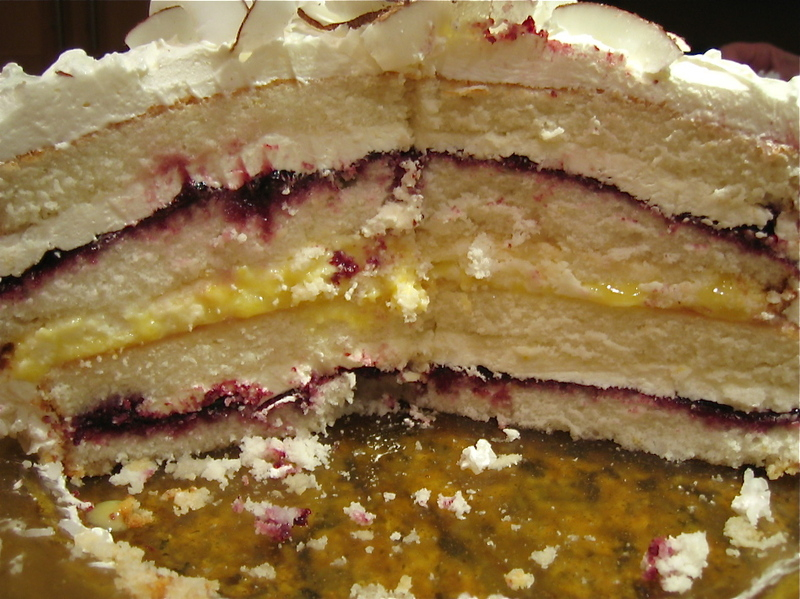 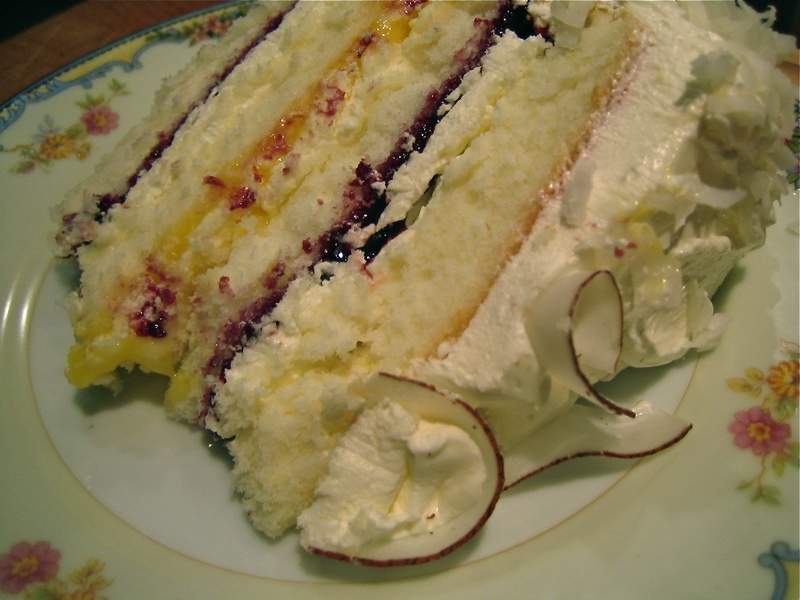 It speaks for itself, doesn’t it?  Besides, I question organzied creativity. 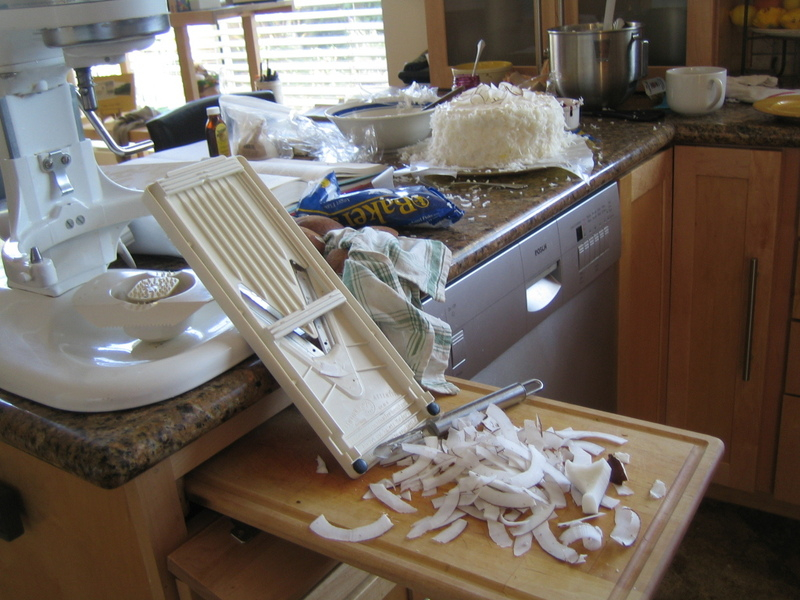 And don’t forget to check out the other Daring Bakers — nearly 900 strong as they all present this cake today.  It’s amazing.