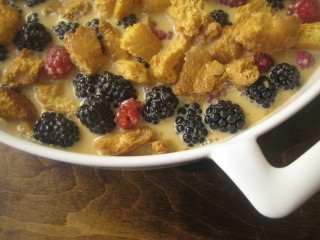 I’ve given Rick Bayless a thorough work over and after much consideration can say that he’s good.  Well, his recipes are good. Very.  But everybody probably already knew this.

I always seem to be the last one to arrive at many of my conclusions because I’m not one to hop on the newest cookbook or latest dish, or cuisine du jour.  I am not saying Rick Bayless is new to Mexican cuisine, nor anyone’s latest celebrity chef.  In fact I know he’s been at this for quite some time, and is highly regarded for his work.  But I’m a cooking magazine slacker, so hop from one to the other trying this, and sampling that, smiling all the while, often ignoring my cookbooks, and definitely avoiding purchasing more since I barely have shelf space for the ones I own.

But I made an interesting decision recently.

I purchased Rick Bayless’s Mexican Kitchen a couple of months ago, and since that time have delved into and thoroughly enjoyed at least 15 recipes, some of which have been made twice.  I’ve never focused on one type of cuisine for this length of time before,and it has definitely been an interesting experiment I can’t wait to repeat.  So why do this?

I live in the most extreme Southwest corner of the U.S., so it’s impossible to not think about, crave, and enjoy Mexican food (unless you’re like my foodie friend Sally)– or what is commonly called Mexican food around here:  corn tortillas fried and filled with pork or fish, and lettuce or tomatoes.  Some guacamole.  Or burritos:  huge rolls of just about anything — even scrambled eggs — wrapped in a fresh flour tortilla.  Flautas.  Refried beans.  Tostadas.  And no, this would not be food I’d find at Taco Bell, or El Torito.  Perish the thought.

Being the foodie I am, and enjoying much of the Mexican food I’ve described above when it’s made well, I also know that we’ve created only a version of something quite far from authentic Mexican cuisine.  For years I’d heard Bayless was considered an authority because he’d taken the time to travel and learn, and listen to people who for generations had made the same dishes the same way.   That’s what I value about this experience.  His knowledge and information provided makes this type of cuisine so approachable, unfussy, and surprisingly, not always as spicy as people tend to consider Mexican cuisine.

Of course, it helped to be able to organize yet another dinner party with the usual suspects, featuring Bayless’ recipes from his Mexican Kitchen book as well as from Frontera which has a number of excellent recipes as well.  When we have these get togethers, I choose a particular cuisine, think about the featured dishes, choose some sides, a salad, and dessert, then email all the choices to those who will be attending.  They let me know what they’re interested in and I send them the recipe.  Each time we do this, we rotate the hosting duties, and invite other friends who may or may not be foodies, just to mix it up a bit.  All in all we have quite a bit of fun and make an enormous mess.

As always with these occasions, taking photographs is quite difficult.  My point and shoot Canon does a nice job when I can think about it, but when there is so much going on, rarely do my photos turn out the way I’d like them to.  I refuse to use a flash, and candle light isn’t great for shooting food.  That’s why everything turns out looking like it came out of my mother’s Betty Crocker cookbook.  Hopefully,  they give a sense of what our dinner parties are all about:  food, learning, friendship, food, wine, and food.

Did I say food?

So I’ll do this a bit backward this time and feature one of the most interesting recipes I’ve tried from Bayless’s cookbook.  It was our dessert:

Warm Cajeta Pudding with Fresh Berries or Budin de Cajeta con Moras.   Cajeta is a goat milk caramel.  Think intensely rich, and amazingly flavored Dulce de Leche here and you’ll have it exactly right.  Goat milk can be purchased in cans or fresh along with cow’s milk.  I love goat cheese, but had never tasted goat’s milk and did purchase the canned milk for this because in experimenting with Dulche de Leche cake not too long ago, canned milk was used in my experiment, so why not continue with it?  I’ll have a confession to make in the end, so stay tuned. 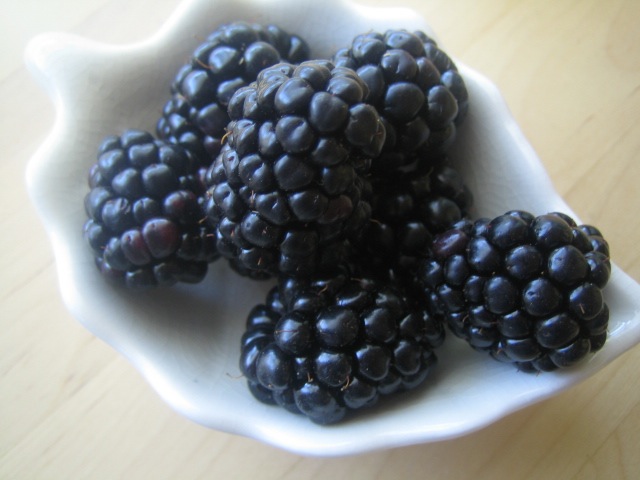 Directions for Cajeta:
In a large heavy pot, mix the milk, sugar, corn syrup and cinnamon stick, and bring to a boil over medium-high heat, stirring frequently.

Dissolve the baking soda in  1 T water, and after the milk boils, remove from heat, and pour in the soda water.  Stir immediately, because the mixture will bubble up quite vigorously!

Back over medium heat, continue to cook, stirring frequently, until it becomes thick, and is pale golden in color — about 25 minutes.  Start stirring regularly at this point until it is a deep golden brown in color and is the consistency of maple syrup — about 10 minutes.

Pour it into a measuring cut, let cool, then add the cream sherry if desired.  Add enough water to make 1-1/2 cups, if necessary. 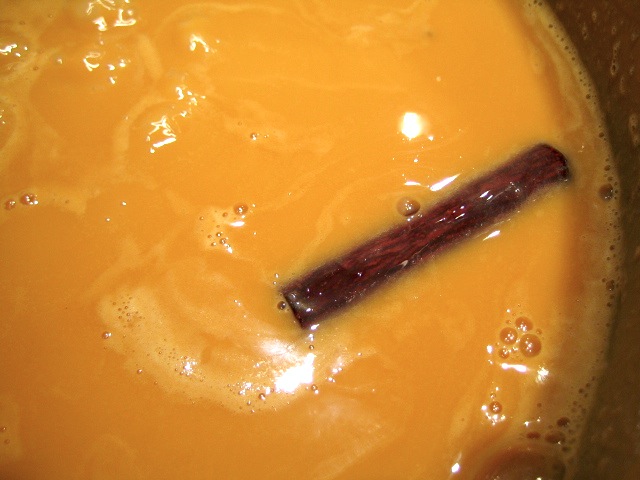 Directions for the cake:
Preheat oven to 350 degrees F.  Prepare a 17×11-inch jelly roll pan by lightly spraying, then lining with parchment, then spraying again.  Flour the pan.

Sift the flour and baking powder together and set aside.  Separate the eggs, pouring all 6 egg yolks into the bowl of an electric mixer, and 4 of the whites into another bowl.  (The two remaining whites can be sealed into a baggie, labeled, and frozen for another use.)

To the egg yolks, add 1/2 cup of the sugar, vanilla, and the hot water, beating with a whisk attachment at medium speed for 5 minutes.  It will be light in color, and very smooth looking.  In two additions, gently fold in the flour mixture.  Turn out batter into a large bowl.  Wash mixer bowl and whisk extremely well to remove all fat from the egg yolks, rinse and dry.

Pour egg whites into the bowl of your mixer and beat on medium speed until soft peaks form.  Add 1 T of the remaining sugar, beat for 1 minute, then add the final 1 T. of sugar, beating for an additional 1 minute.  The whites should be firm, but not stiff, shiny, not dry.  Gently fold into reserved batter a third at a time.

Carefully spread batter evenly over prepared baking pan.  Place in the center rack of the oven and bake for about 15 minutes or until lightly golden brown.  Let cool completely to room temperature.

Tear cake into small pieces and spread out on a baking sheet.  At 350 degrees F, bake again, turning at 5 minute intervals, until the pieces are dry and crunchy, approximately 10 minutes.  Let cool. 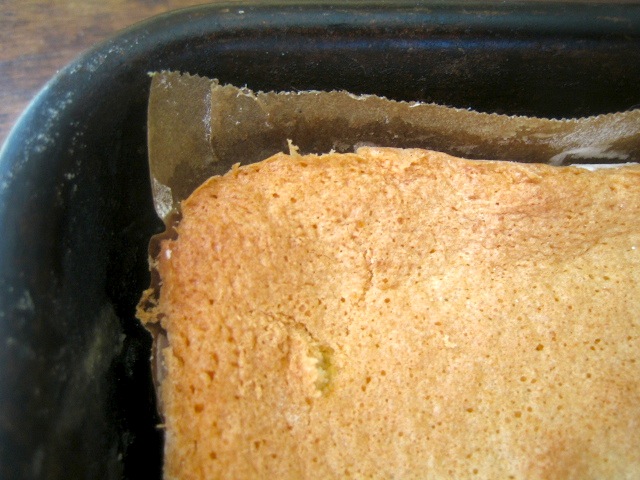 Directions for the pudding:
Preheat oven to 350 degrees F.  Lightly spray an 8×8-inch baking pan.  In a large bowl, whisk together the heavy cream and eggs, then add the cajeta and whisk well to combine.

Bake until the pudding is bubbling around the edges, and is a deep golden brown, about 40 minutes.  Cool slightly, and serve warm with a dollop of cream and fresh berries. 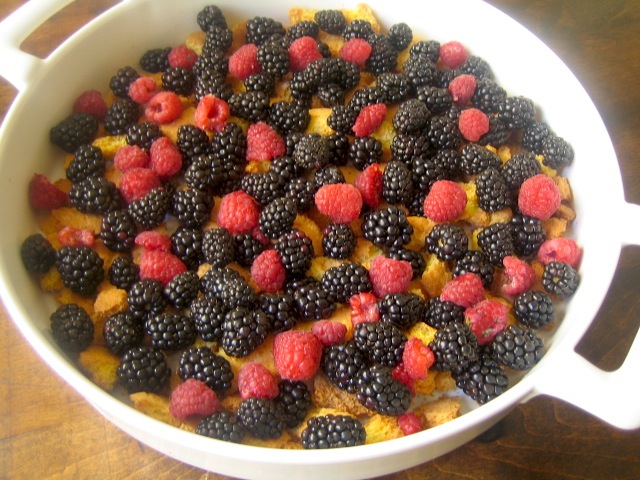 This recipe is beyond worth the number of steps, but it is not challenging if you have read the recipe through a few times, and plan your time wisely.

I’ll feature more of the recipes from our dinner party later in the week.  But tomorrow, I’ve got a cheesy bread that is a sinful combination of ooey gooey lusciousness and crunch. 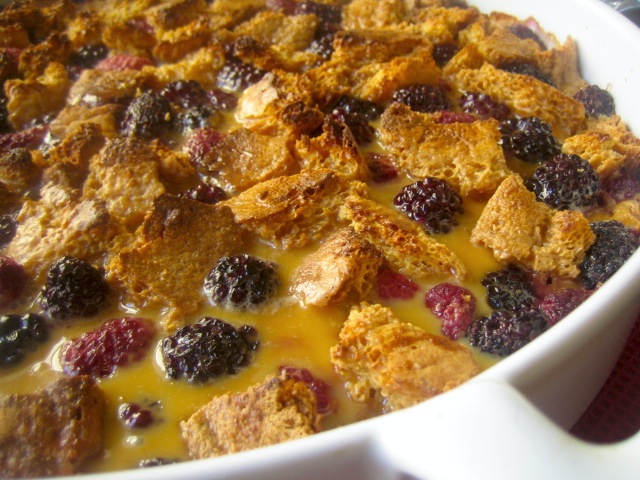