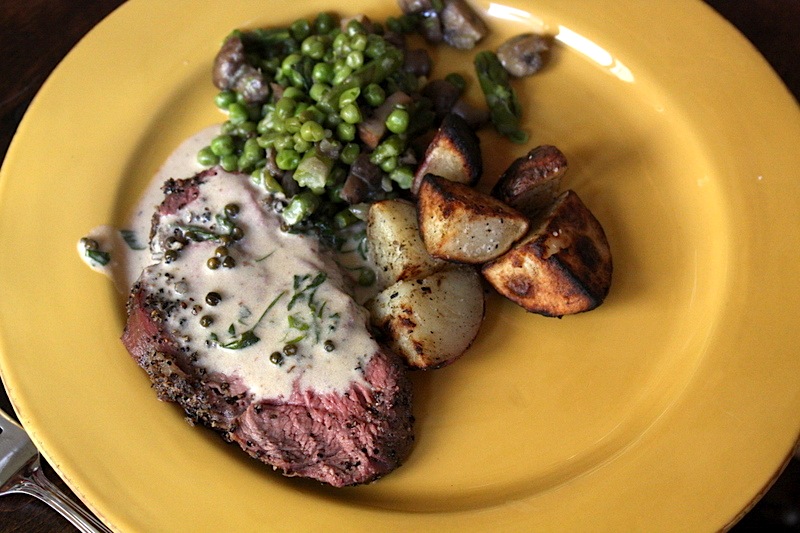 For the last two years, we’ve been experimenting with roasting meat on our barbeque.  You know, roasting it as in it could have been in our oven roasting type roasting.  And there are some who would argue that because we have a gas grill, that’s not barbeque, but I gave up on that battle a few months ago.

Although we have a rotisserie on our barbeque, we most often use the method of roasting meat away from the flame.  We set it above a shallow pan to collect the juices, or sometimes filled with water, on the center rack.  Then we turn on the burners on either side of it, keeping a close eye on both the internal temperature of the meat, and under the hood of the barbeque.

The nice thing about cooking on the barbeque is that you don’t have to heat up your house.  Thankfully, we rarely need to turn on the AC here, but turning on my oven would make us want to.  Even though I know the hood can take care of the heat the oven puts off, turning it on would suck out any cool air the AC added.  Not exactly energy efficient!

And sometimes, salad just isn’t enough for the hot days of summer.

Our most recent experiment with roasting meat on the barbie was with a recipe from the June 2008 issue of Gourmet:  “Smoke-Roasted Pepper-Crusted Beef Top Loin with Green Peppercorn Sauce.”

Green peppercorns you say?  Well when you’re me, you’ve probably experimented with those, too.  In fact, you’ve probably looked for them in your favorite pay more than you want to grocery stores, but couldn’t find them.  You’ve called around to no avail, until you think of Williams-Sonoma.  And guess what?  They had them, so thinking you just may have another occasion in life to need green peppercorns, you purchase two cans.  Just.  In.  Case.

So yes, I had them.  The only problem with these lovely little things is that you don’t need more than a tablespoon or two.  The last time I used them, I stored the remainder in a baggie and put it in the fridge.  After a month or so, the brine took on a bit of a grey cast, and so they ended up in the trash.  There was no using that science experiment for our Father’s Day dinner, so I had to open my second can.  The remainder of that can is in the freezer.  Maybe, just maybe, I’ll find out that I won’t have to waste the tasty beauties this time.

If you’ve never had them, when you look at them, you want them taste like capers.  After all they’re green, round, and small, right?  Um, no.  They’re not spicy, but they do taste of pepper if you can imagine that without the kick.  And yes, they taste of their own earthy briny flavor as well.

But what happens when you sauce a piece of tender and lovingly roasted meat with them?  After said piece of meat has been coated in a salty, black peppery crust? 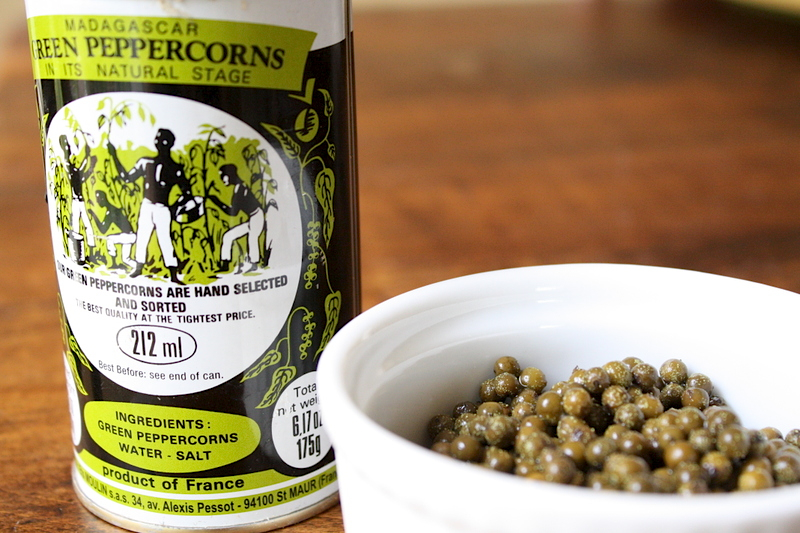 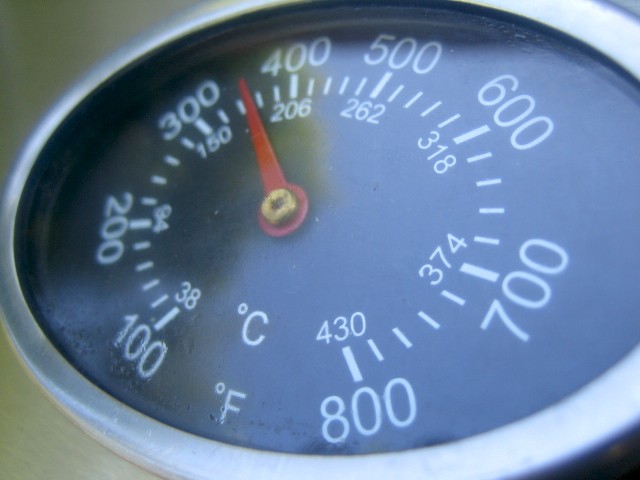 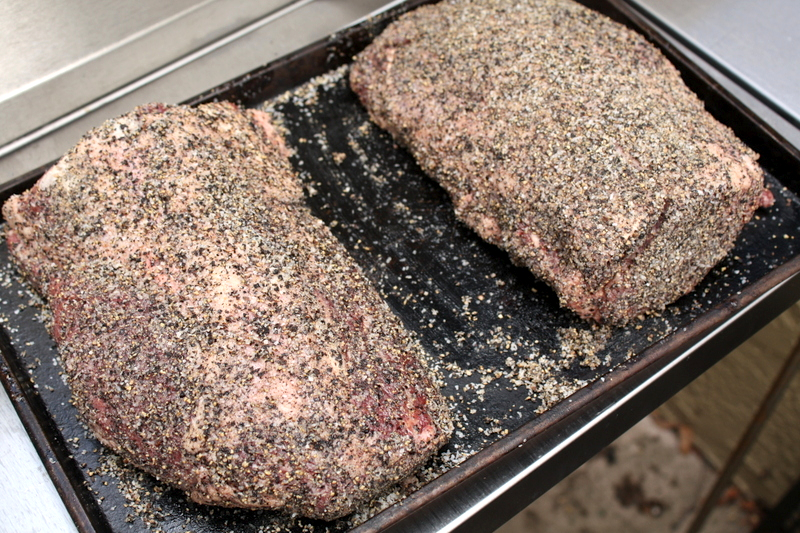 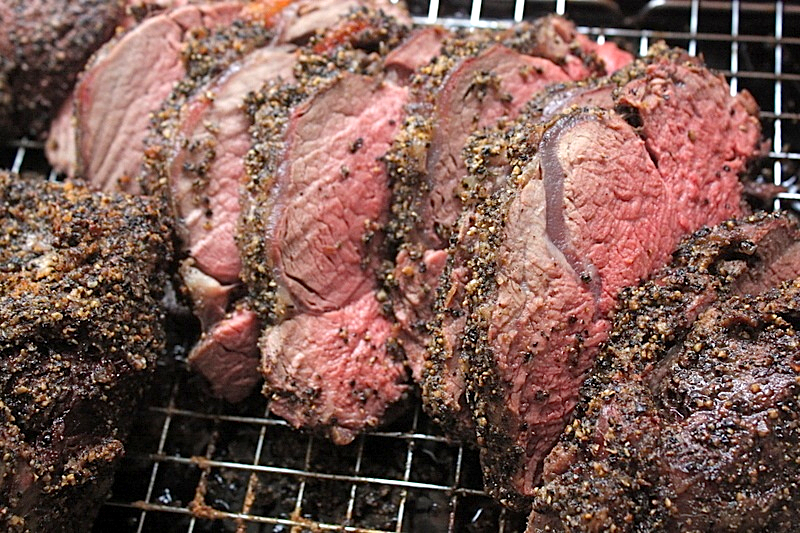 This was Father’s Day Saturday dinner.  Where’s the dessert?  And what did we have for Sunday breakfast?

You’ll have to wait for that… 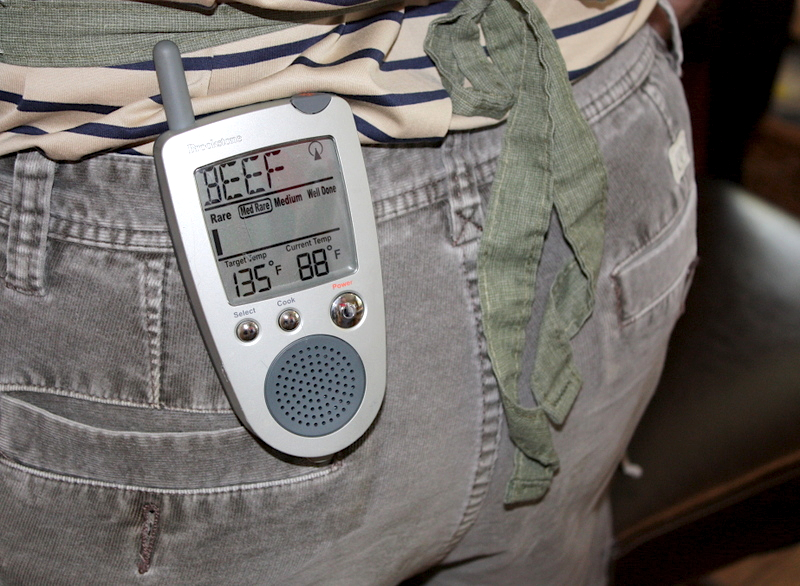