Seared Yellowfin with Kalamatas and Capers My husband has been on a diet.  Sitting at a desk most of the day catches up with you when you least expect it, right?  When we returned from Italy this summer, he decided he was going to do something about it, paying close attention to what he ate, and getting regular exercise.

Since I’m the resident cook, I suggested that he might consider not going back for seconds at dinner, and that I’d help by reducing the quantity of food I cook.  I also suggested that instead of having a protein, starch, and vegetable with bread, that I’d focus on only a main dish, and a side dish.  The only exception would be to add a salad — and even then, the salad could replace the side dish.

He’s done his part by going to the gym we pay for in our HOA fees between 4-6 times a week doing both cardio work on the treadmill or reclining bike and then some weights.  I’ve done my part as well, and last night he informed me that he’s lost 11 pounds.  In two months, that’s the best sort of weight loss since it will most likely stay off over the long haul.  Outside of the numbers on the scale, I did notice yesterday that his trousers are riding a bit higher than before, and that the tailoring he had done when he purchased them to let them out will now have to be redone to take them in.

We won’t discuss whether any of this food regime has had any effect on my body, but I will say that it certainly can’t hurt.  I try to do my three miles three times a week and limit my portions.

We’ve been eating quite a bit of fish lately, and he said this meal was exactly what he wanted after he’d finished it.  Since I’ve tried many variations on it, I’ll agree that this is excellent, and is extremely quick and easy to prepare.  Because I’ve also experimented with a variety of types of fish, I know that it will taste good with the type you enjoy best.

Seared Yellowfin with Kalamatas and Capers 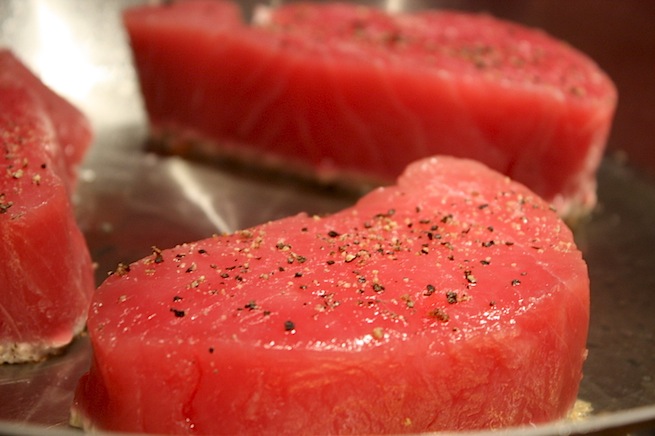 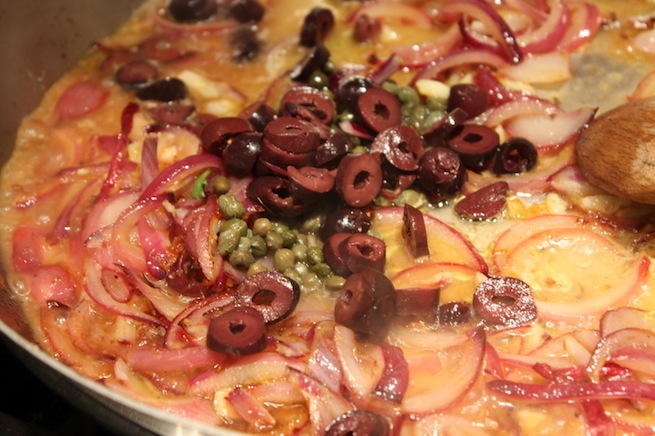