I’m wondering if this post begins where it just ended — with a grilled cheese sandwich that if I wasn’t so full of right now, would have me back in the kitchen putting together another.  In thinking about it though, I’m not sure if it was the apple smoked cheddar and sopressata, or the bread.

The bread is something all by itself.

The mother loaf to be sure.

It all began when…

Just kidding, but here’s the quick version.  Remember those cute little muffins I baked in tiny terra cotta pots not too long ago?  No?  You can refresh your memory here… Well I’ve been keeping an eye on my cheese drawer so that I could give the bread recipe I first saw those cute little pots in because I’ve wanted to try it for so long.

My cheese drawer just happened to have quite the stash of Grafton Cheddar Reserve (my husband loves sharp cheddar), Cypress Grove Midnight Moon (this is the most amazing goat cheese to nibble on with wine…), and Parrano (which I often use instead of Parmesan).  There was also some of that lovely Goat’s Brie, but I decided right at the end that I’d save that for nibbles since the flavor is so mild.

I could have stopped there, but the recipe did mention that deli cuts of meat are good to add.  Except the few pieces I was able to scrounge up looked a bit dodgy, so why not bacon?

Little did I know… 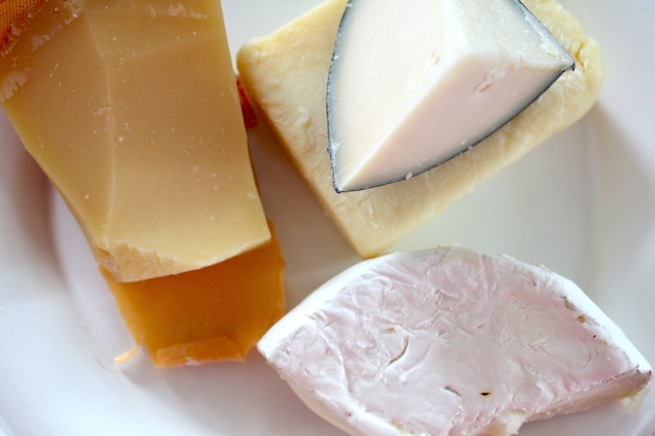 1.  Heat the 2 c. water in the microwave until about 105 degrees F.  Pour yeast into a small bowl, and pour 1 c. of the water and the sugar into the bowl and mix to dissolve the yeast. 2.  Measure out the flour and pour onto a clean working surface, making a deep well in the center.  Sprinkle the salt over the flour.

3.  In a medium bowl, mix the egg yolks, the grated cheese, the bacon pieces, and the thyme.  Set aside.

4.  Pour the yeast mixture into the flour well.  Using one hand or a wooden spoon handle, slowly begin to stir from the inside of the well, incorporating more flour from the exterior wall as you go, being careful to keep the liquid from leaking out.  Once all the liquid is incorporated, now pour in the remaining cup of water and slowly incorporate the remaining flour to create a soft dough.

Here’s what I did… 5.  Flatten the dough out a bit and pour on the eggy cheesy bacon mixture.  Using your hands, squeeze the mixture into the soft dough until the eggs are incorporated and shreds of cheese can be seen throughout the dough.  You may need to dust occasionally with flour because it becomes quite sticky.  Once it’s mixed, knead for 5 minutes by folding and refolding it onto itself.  Shape into a nice round, score it deeply, and place on a baking sheet to let rise at room temperature (75 to 80 degrees F) until doubled in size, about 45 minutes. 6.  After the first rise, punch the dough down and place in a sprayed casserole pan and let rise again until doubled in size, about 45 minutes.  Toward the end of this period of rising, preheat oven to 400 degrees F. 7.  Bake for about 30 minutes, turning oven down to 375 degrees F after 15 minutes.  Remove from oven and place on a baking rack to cool out of the casserole at least 20 minutes. What I should have done...

Leave the egg yolks out of the cheese mixture.  After pouring the yeast mixture into the flour well to incorporate, add the egg yolks then, mixing slowly before adding the second cup of water to make the dough.  Knead the cheese and bacon into the dough at this point.

What I could have done…

Mix the egg yolks into the dough as described in the should’ve section above.  Knead, then let the dough rise.  After punching the dough down, flatten it out with your hands and sprinkle on the bacon and cheese.  Roll the dough into a loaf shape, then let rise the second time.

So all you yeasty people out there, tell me about why the 4 egg yolks need to be in this.  They aren’t in the basic recipe.  Just curious.