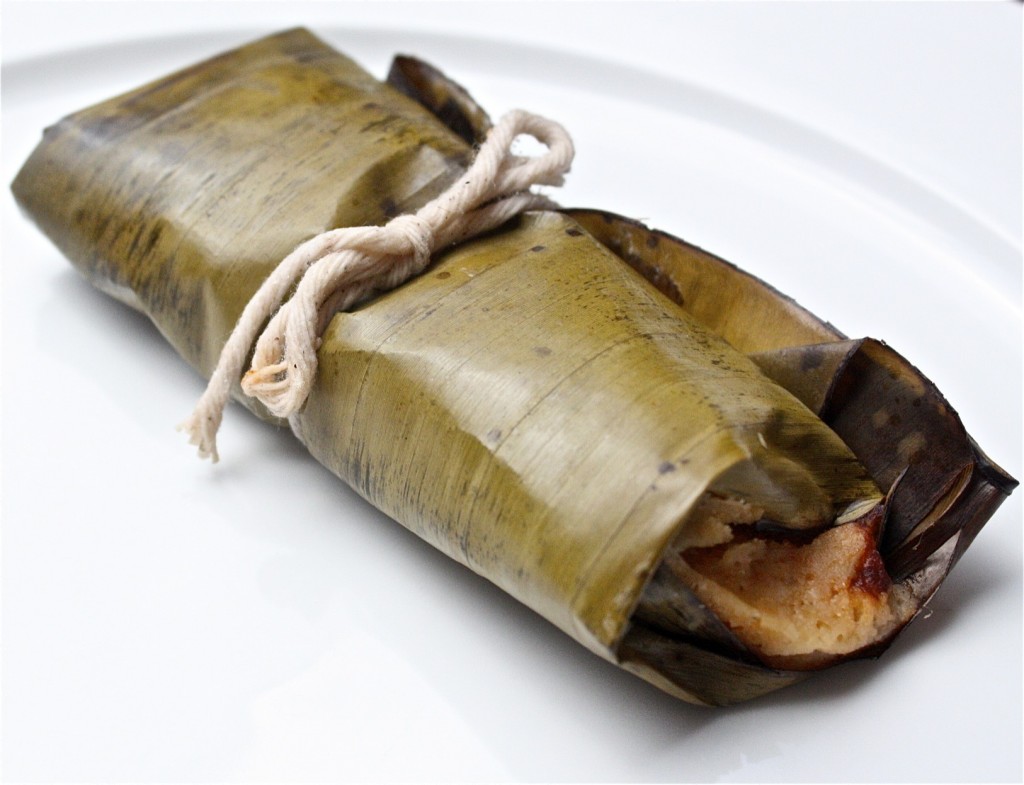 Have you ever made tamales?  No, not tamale pie.  My mother used to make that and as much as I enjoyed her cooking, tamale pie would not have been one of my favorites.  From what I can remember, it was noticeably sweet, and comprised of hamburger, corn, and canned tomatoes.  I’m not going to blame this on my mother, because I know it was the recipe.  Tamale pie could never compare to homemade tamales.

The only source of comparison I have is that of local women who tempt office workers with their once-a-week offerings, wrapped in foil, and still piping hot.  They’re amazing and so of course it’s a challenge to not eat one before taking them home to share for dinner.  I’d say that’s a fairly good model to work from.

Often, tamales are made with dried corn husks, the masa, or corn meal and filling spread on the inside of a dried corn husk, or fresh banana leaf before steaming.  The filling can be anything imaginable, and often is depending on who traditionally makes the tamales, and what region of Mexico or the Southwest U.S. they’re from.

If you’ve been studying Mexican cooking like I have the past few years, the idea of banana leaves wrapped around a savory filling is quite tempting; it sounds so exotic! A glance out my patio window focuses in on the not so big non-fruit bearing variegated leaf banana plant I’ve been nurturing as a possible source.  No, I’d have to depend on a local market, which shouldn’t be a challenge in San Diego considering the influence of Mexican cooking, but it is.

When I first happened on to the lone 4-lb. package of huge sections of banana tree leaves recently, I grabbed it knowing I’d procrastinated long enough and could now make my own homemade tamales. I knew I didn’t need four pounds of leaves, so attempted quite unsuccessfully to separate them.  Unfortunately, the leaf strips were enormous and all folded together, so my efforts in trying to avoid waste ended up creating something worse.  The leaves began to split, making them useless for the next shopper’s tamales.

Thankfully, my first attempt at tamales was a success thanks to the help of a very good friend.  Between the two of us, influence from a few good recipes, and a make-shift steamer, a few split banana leaves caused very few problems. 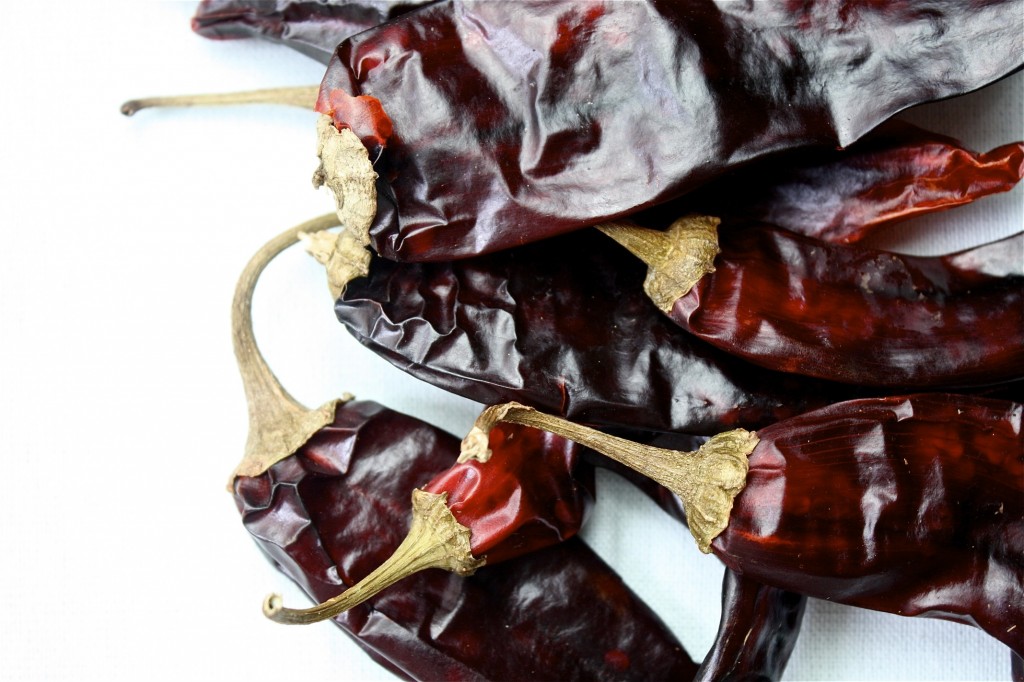 Place the onion and garlic (skins on) in a dry skillet over medium heat.  Cook about 15 minutes or until fragrant and with black spots appearing on the skins.  Allow to cool, then peel and put in a blender or food processor with the citrus juice, achiote paste, vinegar, salt, pepper, cumin, and oregano.  Pulse to puree until smooth.

Dry the pork with paper towels and then coat exterior with citrus puree.  Place in a sealable plastic bag or wrap well with plastic.  Refrigerate for about 4 hours, or, overnight.

Cook pork in an oven or using the indirect heat grilling method at 350 degrees F or until it is extremely tender, about 3 hours.  Allow to cool, then shred, or cut into very small pieces.  Set aside.

Cook the garlic as described above.

While the garlic is cooking, cut the stems from the guajillos, cut each once lengthwise to open, and remove them along with the seeds.  When the garlic is done and cooling, lay each chili in the pan.  You’ll have to press on them with a wooden spoon to toast them.  You’ll know they’re ready to be turned when you see a puff of smoke, but not a second longer.  Turn and repeat with each chili. 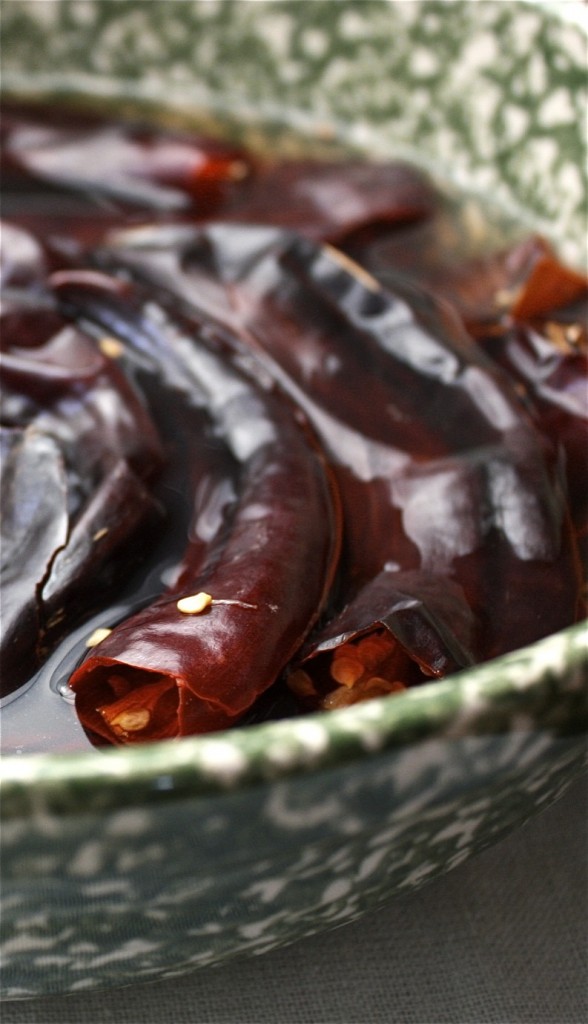 Place the toasted chilis in a bowl and pour enough hot water over them to cover.  Allow them to sit at least 30 minutes.  Expect to save the water for another use, if you prefer.  It can take the place of all or part of the broth in the recipe as long as it is seasoned.

When the 30 minutes has passed, using a blender or food processor, add the peeled garlic, oregano, pepper, cumin, and 2/3 c. of the broth along with the chilis and puree until smooth.  Pour into a fine meshed strainer positioned over a bowl, and using a rubber spatula, rub the puree through the strainer, scraping the bottom to collect the sauce.  Continue until only small piece of the dried guajillo skin are left.  Discard.

In the same dry skillet used to roast the garlic and chilis, pour in the puree all at once.  Stir constantly over medium-high heat about 5-7 minutes until it thickens to a paste, deepens in color, and smells pungent.

Stir in the rest of the broth and simmer, covered partially, until the consistency of cream, about 30 minutes.  If it becomes too thick, then add more broth.

To finish, taste and add to your preference, salt and sugar.

Use as part of the pork filling, and as a sauce to serve over the completed tamales. Place the shredded or cubed pork in a skillet and pour over about 1/2 cup of the guajillo sauce, making sure to coat all.  Allow to simmer on very low heat while preparing the masa and banana leaves. 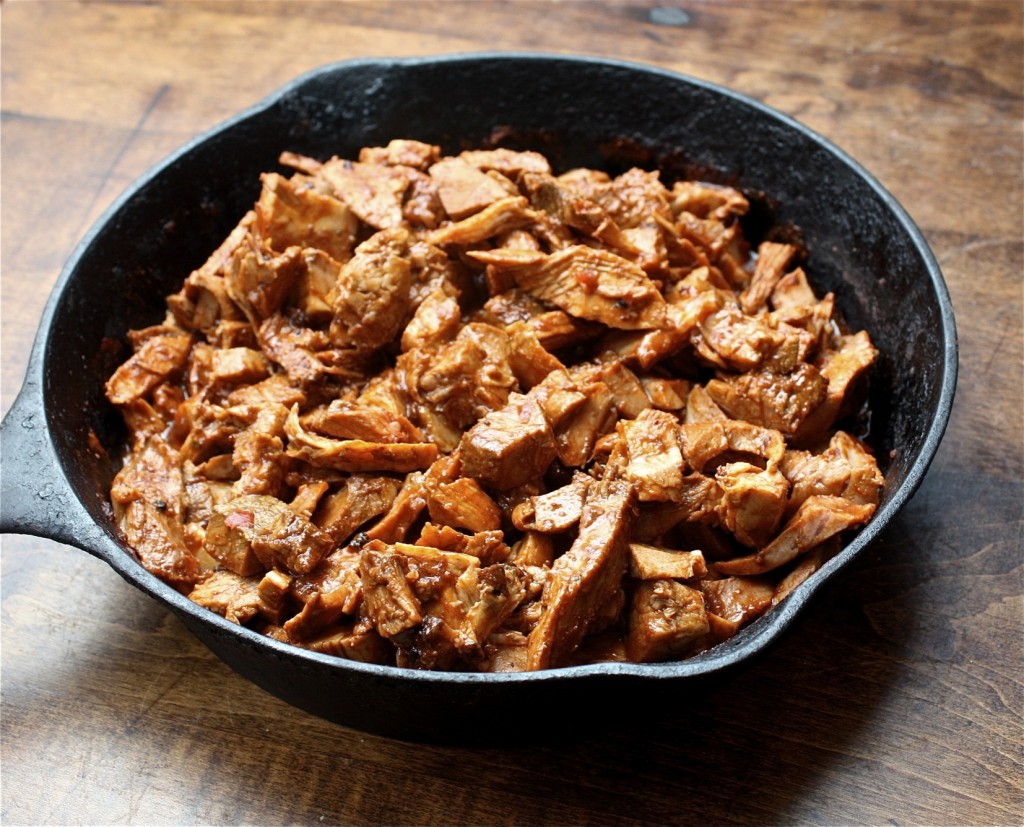 Beat the shortening or lard until it is light and fluffy, less than a minute.  Add the masa (purchased fresh, or reconstituted) in several additions, beating well between additions.  Add only enough of the cool broth (1/2-2/3 c.) while beating to create a soft batter that is slightly pourable.   To test for readiness, drop a teaspoon full in a cup of cold water.  If it floats, the batter is read to be used.  Season with salt according to your taste.

Cut about 20 squares of the banana leaves — each about 8×8 inches.  To prepare them for the filling, use tongs to hold them over a gas burner until they soften and become quite shiny.  It helps to have one person doing this, and another on the receiving end, but is not necessary (just more fun).  If you don’t have gas burners, then you can steam them one at a time until they’re pliable.

Spoon about 1/4 of the masa batter onto the banana leaf, positioning it in the center of the square.  With the back of a spoon or offset spatula, spread the mixture to the right, forming a rectangle.  Stop about an inch from the edge of the banana leaf.  Spoon a bit of the chili-pork mixture on the extreme left of the masa rectangle.  Then fold the entire right side of the banana leaf toward the center, which folds the masa over the pork.  Fold in the bottom and top sides to the center, then continue to fold the remainder toward the original direction — left.  Use a piece of cotton string to tie around the package and make a bow.  Set aside and repeat until all the banana leaf squares are filled.  You’ll have left over pork. 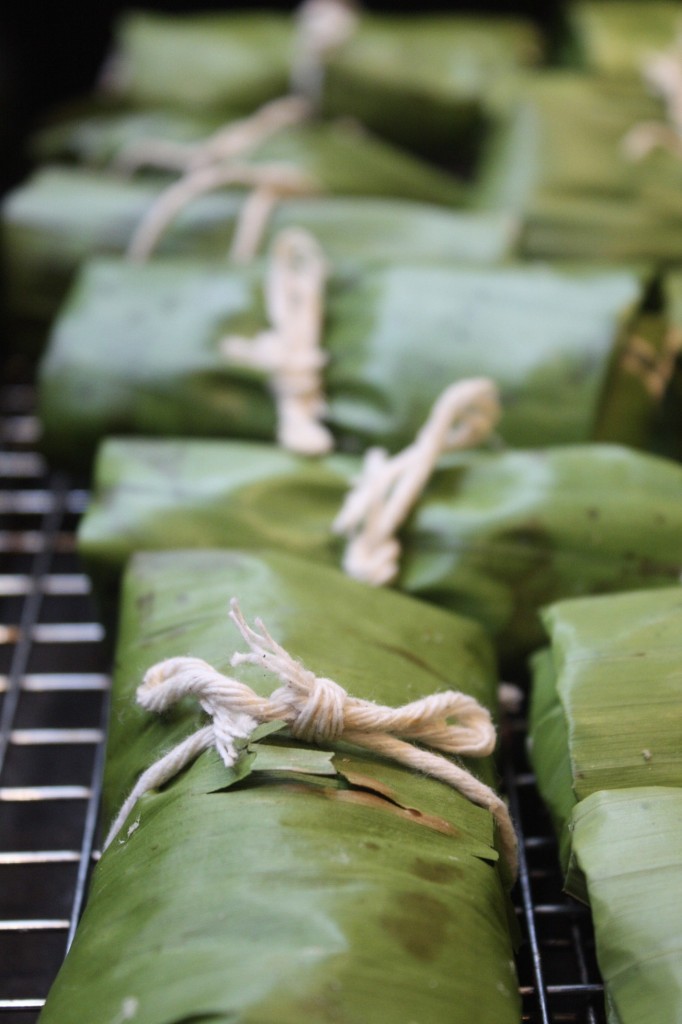 I used a large roaster pan with offset baking racks set inside.  I placed the roaster over two burners on my stovetop and once the tamales were placed in a single layer on the baking racks, poured water from the tea kettle into the pan, being careful to not pour it on the tamales.  With the heat on low, I covered the roaster with foil and allowed the tamales to steam about 1 to 1-1/4 hours.  You’ll have to pull back the foil occasionally to make sure there’s water in the bottom of the roaster, so make sure you have a kettle simmering to add hot water when it’s needed. 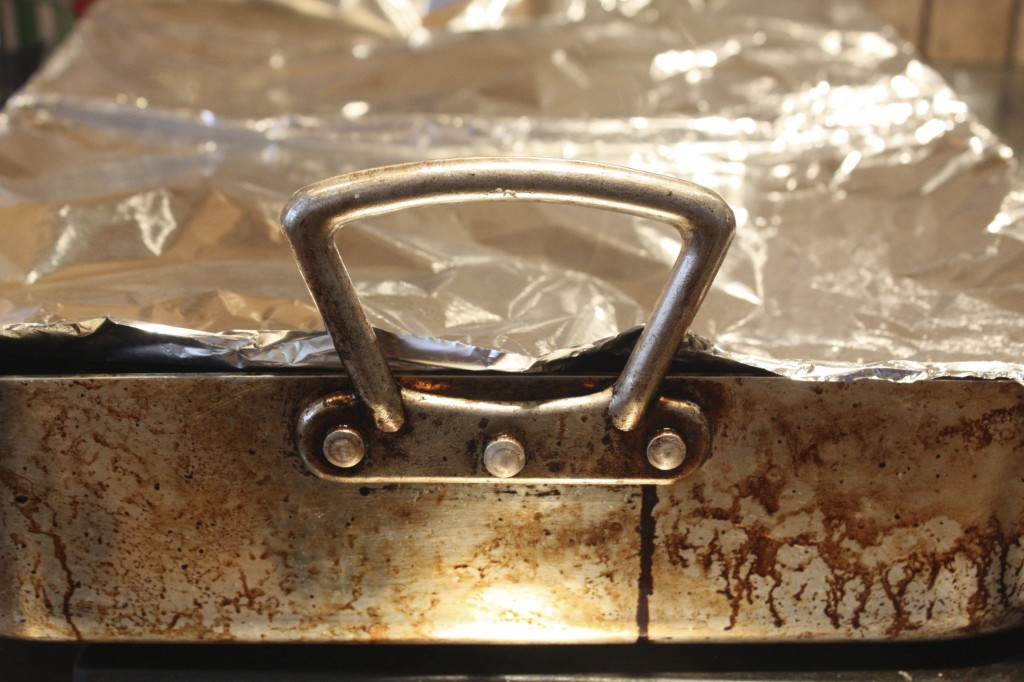 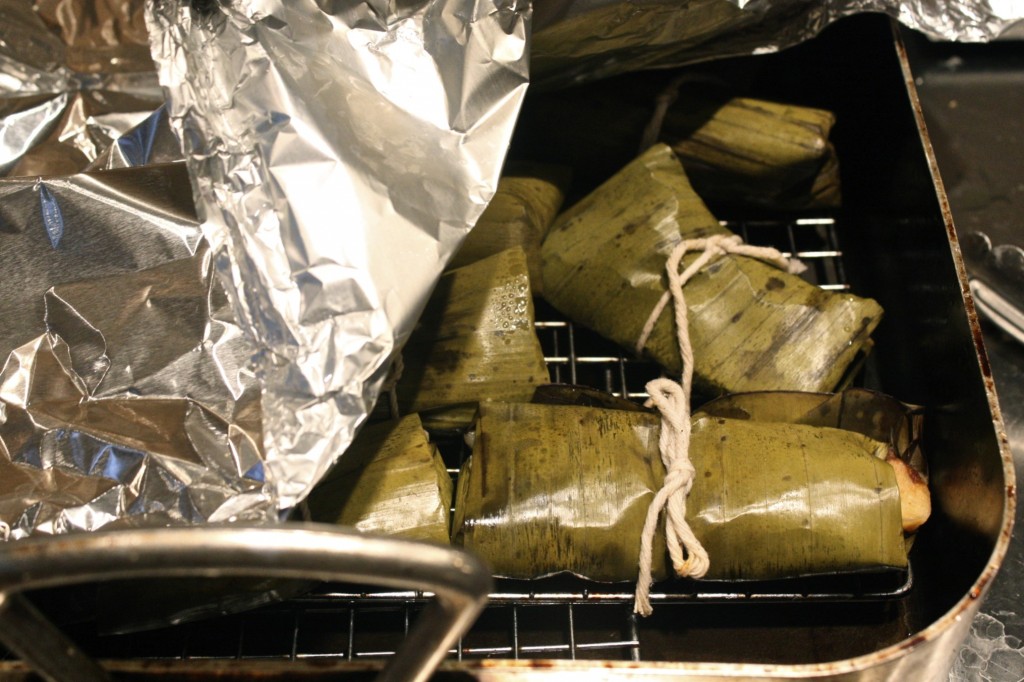 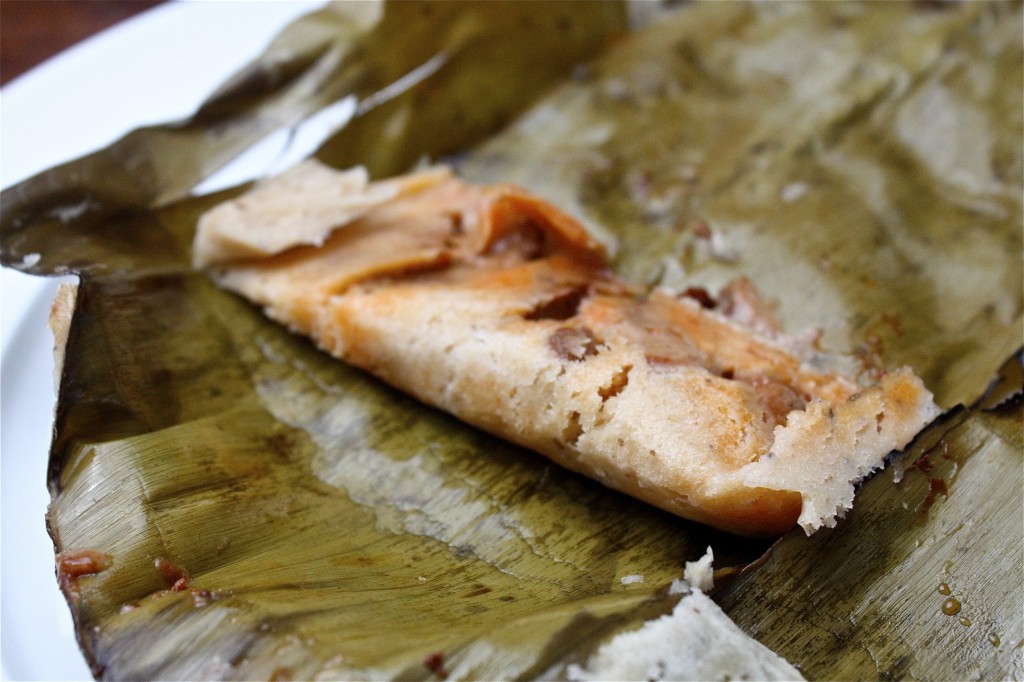 To serve, unwrap the tamales and pour on some extra sauce.  They’re delicious.  I promise. 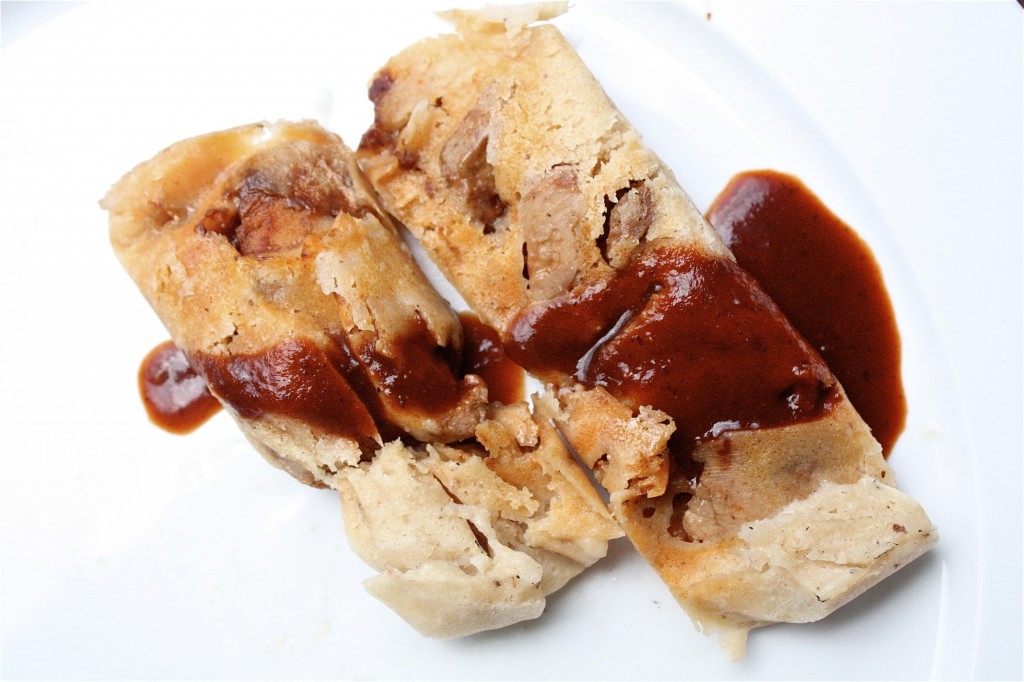