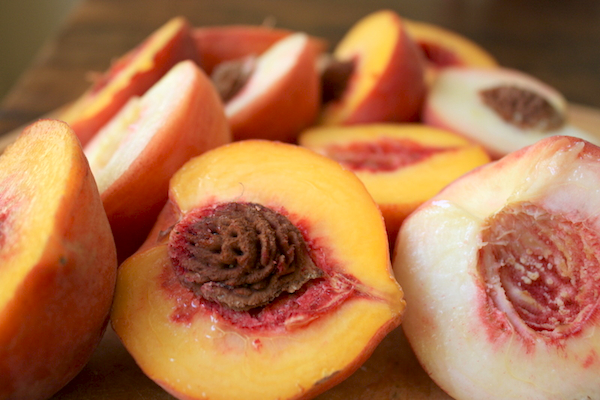 I know there’s been quite the brouhaha recently over food bloggers’ use of recipes found here and there in the creation of their own recipes, and the credit given to those sources when they post their results. It’s old news now, but it’s been bothering me for many reasons that are either directly related, or somewhat related because of threads of discussion I’ve been caught up in since it all happened. I normally use my non-food blog to voice my opinions to spare the foodie world of my sometimes cutting attitude, but since this issue is food related, I decided to get a few things off my chest.  If you’re not sure about what I’m referring to, then Google Melissa & Cook’s Illustrated and you’ll have your choice of where to begin.  Or, hop on over to Serious Eats, grab a seven course dinner and hunker down for the macro hair-splitting session over this issue continuing there.
Yes, there’s a recipe today, too, but it won’t be cheese-based to go with my whine…

When I cook, it is most often because I’ve seen a recipe somewhere. What a concept.  Or, my fridge is so stuffed with food we must eat or it becomes yet another science experiment on a list of others I’ve perfected over the years from having eyeballs bigger than my stomach.  I cook about six days a week with the seventh being take-out, or dinner somewhere nearby, and no, not necessarily on Sunday.  Sure we have tacos the way my family has made them for decades, and once in a while throw some pasta on the stove with sauce that comes from a jar — good sauce.  But not very often.  And rarely do I decide to make something just by experimenting, that is unless you count the fact that I almost never follow any recipe exactly the way it was written as experimenting.  But who’s going to split that hair?

No, wait!  I nearly forgot that everyone is splitting that hair right now.  Okay, well, maybe not everyone, but still.

Now, why would I go out of my way to choose a recipe and then not follow it?  Or, why not?  My mother would say it’s because I’m just plain ornery, but she’s contrary by nature, so that doesn’t count.  I, on the other hand, actually know that it’s because it’s hard not to practice what has been learned from years and years of cooking. Let’s face it — often, recipes aren’t all that different from one another unless you’re planning on whipping up Thomas Keller’s Bellwether Farm Baby Lamb — Five Cuts Served with Provencal Vegetables, Braised Cipollini Onions, and Thyme Oil.  Like that would happen here.  Well, maybe.  You never know.  Just not today.

For the most part, the recipe is only the inspiration (some more than others), unless I’m baking. Then I’m far more attentive. And of course, I have to alter recipes because I’m lacking a particular ingredient — or five!– which is challenging for me to fathom considering the number of times I find myself in grocery stores each week.

Because of my particular cooking habits, I always credit my sources. Always. Even when I’ve altered a recipe beyond all recognition, I feel that I would not have ended up with what I cooked had I not seen the original recipe.  And because I most often use magazine recipes or recipes available on their affiliated websites, then it’s an easy link, so why not?  I suppose that there’s the outside chance that someone could email me and say, “We don’t want to be connected to you,” but pigs would fly first.  Besides, my food is good.  Period.  Okay, so most of the time.

Let’s use an ice cream recipe as an platform for my nonsense today. Or, if you’re so inclined, let’s not, and say we did.

Call this the evolution of MY Peach Ice Cream Recipe…with “my” being very subjective.

Step One: I was visiting foodblogs about a week ago because a group of us had just posted our Cassatas, and I stopped by Ivonne’s of Cream Puffs in Venice to check hers out.  I found that she had posted an absolutely beautiful peach and almond tart that made me realize I hadn’t had peaches or nectarines once this season yet.  The horror of it all!  So on my grocery list they went (yes, I actually have a list even though this is difficult to imagine…) and I planned to actually make Ivonne’s tart.  Really.  I did.  Peach cobbler is a family favorite and although Ivonne’s tart isn’t a cobbler, I was craving warm peaches with a crust and some cream.  Oh.  My.

Step Two: Days went by while I was baking and cooking other recipes because that’s all I do.  Ever.  I play with food.  The peaches I ended up purchasing were nearly used to make Fresh Peach and Ginger-Cream Shortcakes featured in the August 2008 issue of Bon Appetit to take to a family get together, but because I gave my husband a choice, he went with the Chocolate S’mores Cake featured in the August 2008 issue of Food & Wine.  I haven’t posted that yet because I’m working on my own rendition and have plans to compare the two in a future post in which I will document my sources up one side and down the other, but only if my photos turn out.  You just never know.

Step Three: The poor peaches were beginning to look a bit tired in their unused state, and so I became desperate for something to create.  It’s summer, and everyone’s complaining about the heat everywhere (but here), and so I decided ice cream would be the way to go.  No oven.  I also had some yogurt, ricotta, and mascarpone in the fridge, so included those ingredients in my search for an ice cream recipe because I could love me some ice cream with any or all of those luscious ingredients.

Step Four: I happened onto “No-Cook Peach Ice Cream” at My Recipes which ironically credits the recipe to Southern Living and I wondered if there’s an affiliation.  The recipe called for the use of canned condensed milk, and I wasn’t too thrilled with that idea since my cat would hate my guts if I used her milk and she’s grouchy enough as it is over the organic flea spray I’ve been using on her.  It also called for only a small amount of sugar which is always nice, and canned peach nectar which sounded very interesting.  I bookmarked it because not having to turn on a burner is always a nice option, right?

Step Five:  Then I found a Banana Peach Frozen Yogurt recipe at CD Kitchen which I thought I could adjust since I didn’t have bananas, but noticed that there was no sugar added (the bananas were providing the sweetness) and that I’d have to play around with sugar amounts. No thanks. And I didn’t bookmark it because I already have some great frozen yogurt recipes.

Step Six: I continued to search until I found a Peach Ice Cream recipe at epicurious that looked simple until I noticed it was connected to another recipe and I didn’t want to have to surf back and forth between the two since my printer wasn’t hooked up.  I did notice that this recipe called for leaving the peelings on the peaches.  Um, yum?

Step Seven: What a lovely surprise to  come across Helene’s recipe for Georgia Peach Ice Cream at Tartelette while I was searching.  I almost stopped right there, because how could I go wrong?  Helene + Peaches + Ice Cream?  I rest my case.  I did notice that Helene decided to puree some of the peaches and leave the rest in chunk form.  Nice.

Step Eight: Then I saw a recipe for Brown Sugar Peach Ice Cream in the side bar back at CD Kitchen, and oh my goodness.  How could I not want to try that?  I had all the ingredients, sort of.  I had six peaches instead of the four called for, and not quite as much brown sugar, but did have some turbinado. I had an orange instead of a lemon for the citrus…and a lot of heavy cream.  I was ready to go. 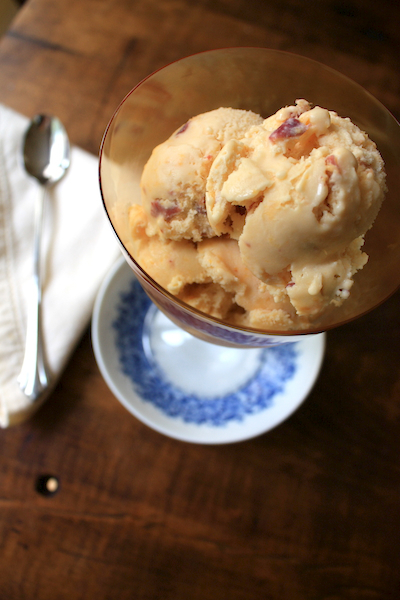 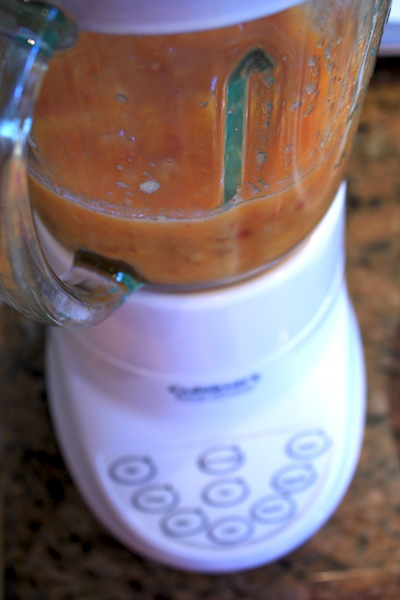 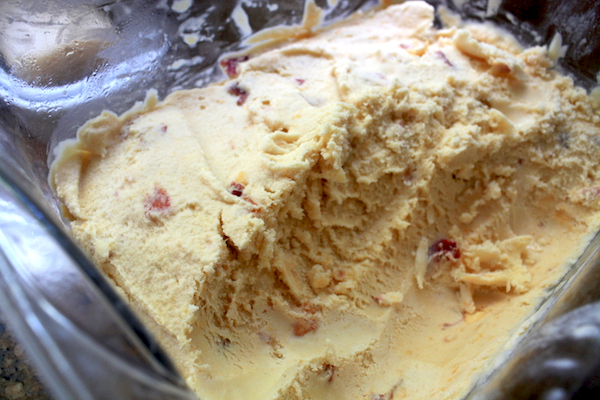 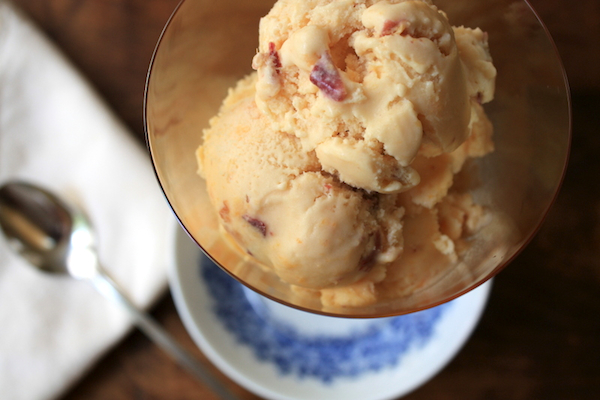 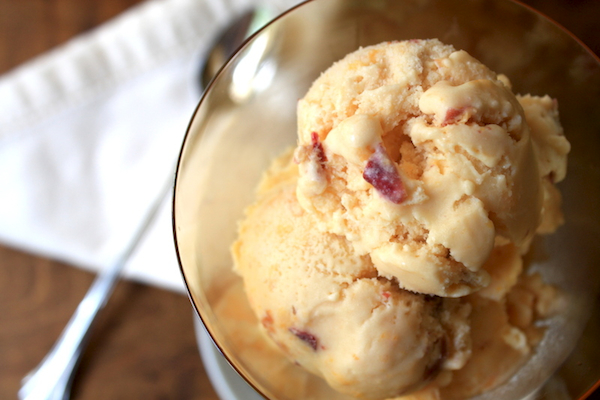