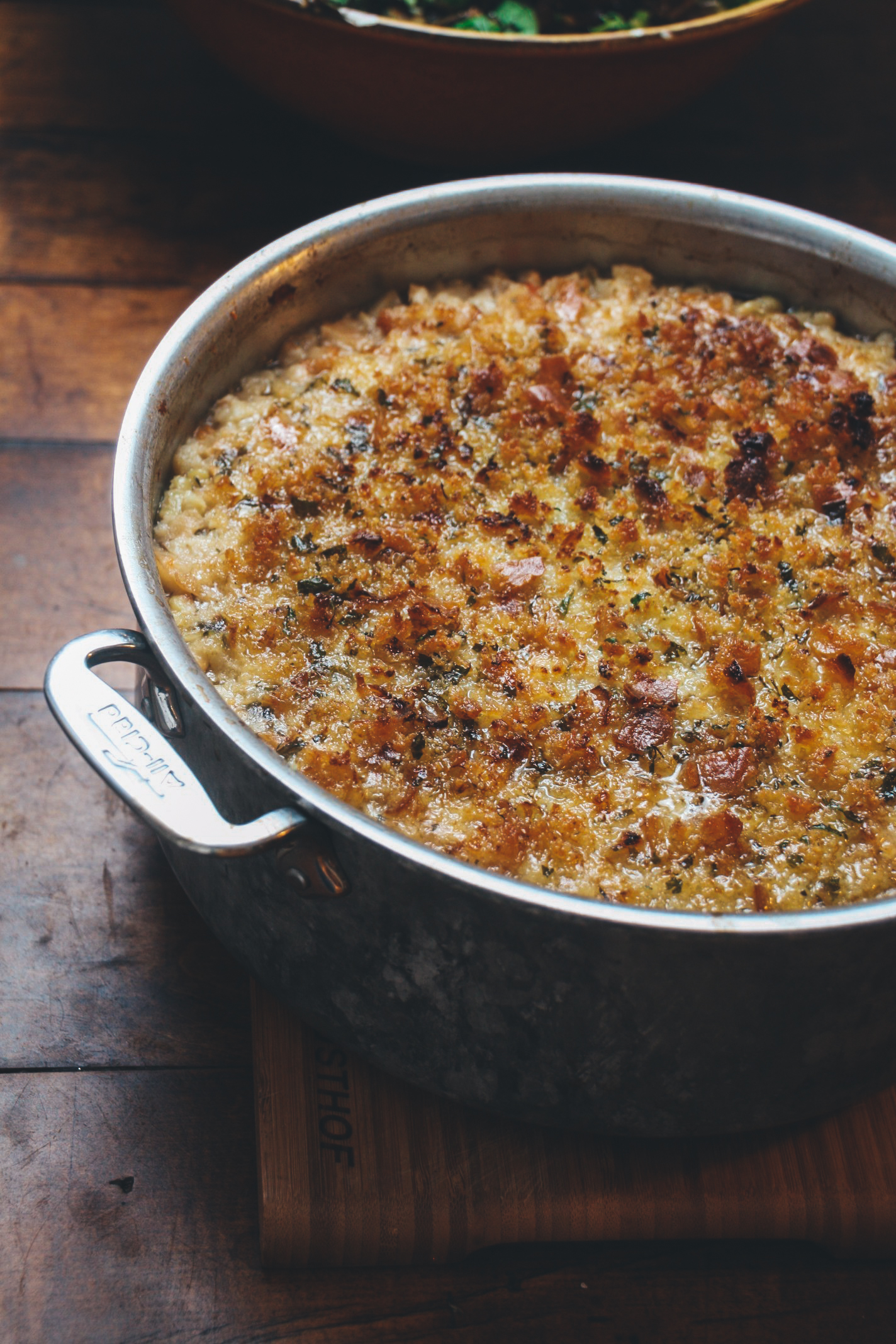 I think the first time I heard anyone mention cassoulet, it was Martha Stewart years ago in the first version of her television show.  Outside of remembering that the main ingredients were white beans and a huge amount of meat for what could be classified as a one pot meal, I know she described it as one of her traditional holiday party menu items.  I also remember wondering how a preparing a pot of beans could be so involved.  Really? 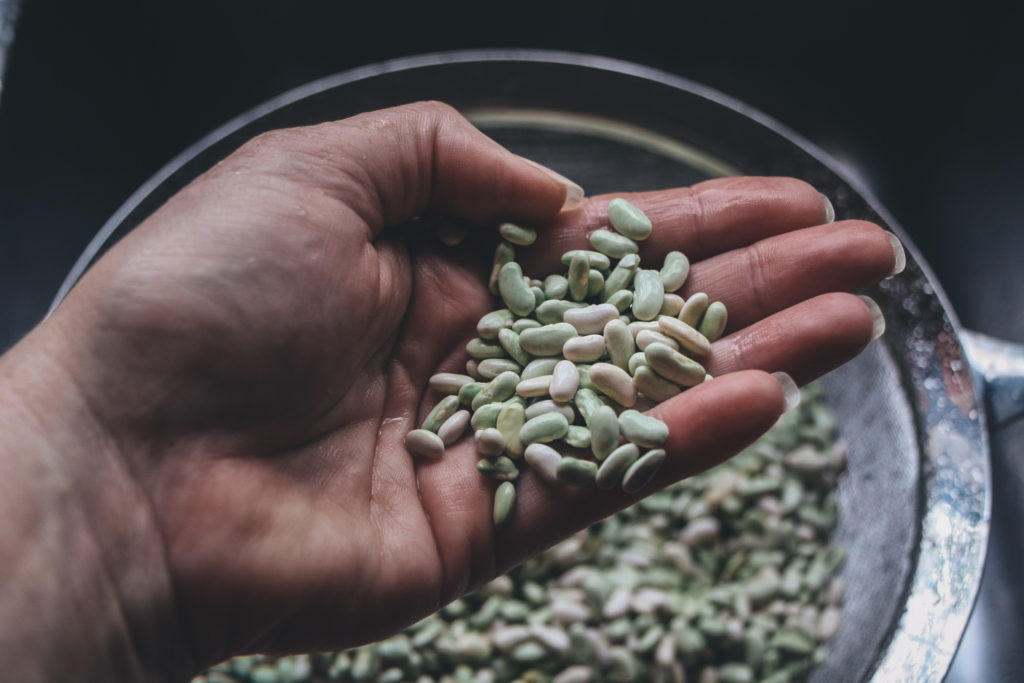 To say that cassoulet is simply a bean stew or “dried beans and meat” is humorous because I grew up eating what could be called bean stew.  Beans go in a pot with few additional ingredients and not much attention.  Time goes by and a tasty dinner is served.  Bear in mind that in this scenario, the bean to meat ratio is in favor of the legumes.  Cassoulet is anything but that, but I’m thinking it shouldn’t have to be.  At the same time, if I set out to make one of the many recipes I glanced at for “easy” cassoulet I’d feel I’d cheated somehow.  Perhaps I’d have something with flavor similar to cassoulet, but I’d miss out on what I often enjoy so much about tackling an involved recipe for the first time:  all the thinking I do.  There’s something very gratifying about methodically working through a recipe that takes some thought and effort.

I’ll confess this all began with a small jar of duck fat I brought back from England recently.  I saw it and knew it would remind me of all the possibilities, so tucked it well into my suitcase until we arrived home, then stored it in the fridge to think about.  Many traditional versions of cassoulet are made with duck fat, but I needed a recipe that wasn’t swimming in it, which means I would need to choose a recipe lacking in, well, duck — or more specifically, duck confit.  My little jar’s quantity wasn’t nearly enough to make that.

Some may say a duckless cassoulet is sacrilege, but I know the recipe I chose, which uses tomatoes and a bread crumb topping, could also invite that complaint.  Cassoulet is a dish originally from the Languedoc region in Southern France, with the towns of  Castelnaudary, Toulouse and Carcassonne all claiming credit for its creation and there are as many variations as there are village cooks in that region.  Originally, I’d considered floundering through a Toulouse Cassoulet until I came to my senses realizing I hadn’t the time I needed to construct it.

I made the cassoulet, but I confess that I did not break the “film” that develops over it while it cooks seven times, so evidently, I did not create anything perfect.  Rich, yes.  Perfect, no.  With respect to all that’s good about home cooking, and for someone like me who truly enjoys the process of constructing a dish like this, it’s a great reason to gather a group of special friends for a special meal just because.

Especially on a cold winter’s day.

For the Pork Loin…

Prepare the beans first.  Check for stones or bad beans, rinse and drain.  Pour into a medium sauce pan and cover with cold water by 3″.  Cook over high heat until boiling, then reduce heat and simmer about 30 minutes until softened.

In another sauce pan, cover the pork rind and pork belly with cold water by 3″ and bring to a boil over high heat.  Reduce heat to medium and cook for 20 minutes.  Pour out the water and rinse with cold water twice.  Cut into 1/2″ cubes and set aside.

Prepare the lamb.  In a large heavy pot warm the fat or oil over high heat.  Add the lamb, browning on all sides, 5-8 minutes.  Add the onion, garlic, and spices, mixing well.  Add the wine to the mixture and reduce the heat to low, cooking about 1-1/2 hours until meat is tender.

To prepare the pork loin, rub well with salt, pepper, thyme, and rosemary.  In a Dutch oven or large, heavy pot, heat the fat or olive oil over high heat and brown the pork loin on all sides — about 8 minutes in all.  To the pot, add onions and garlic, stirring for 1-2 minutes.  Add tomatoes and 1-1/2 c. of the wine, reduce heat to low and cover, cooking until meat is tender, about 1 hour.

Prepare beans.  In a large pot, place softened beans, pork rind, pork belly, bones from the loin, onions, garlic, parsley, thyme, bay leaves, peppercorns, cloves, and salt.  Pour in 3-1/2 water and bring to a boil over high heat.  Turn the heat to low, and cook for about 1 hour, uncovered.

Once the pork loin is ready, remove it from the pan and add it to the bean pot.  To the remaining pork juices, deglaze the pan over high heat by adding the remaining 1-1/2 c. white wine making sure to scrape up any brown bits from the bottom.  Boil the liquid until reduced by half, then pour into the bean pot.

When the lamb is ready, scoop out pieces with a slotted spoon and add to the bean pot.  Set the remaining lamb cooking liquid  aside.  Now add the sausages to the beans as well and continue cooking the entire pot for an additional 30 minutes.

While the bean and meat mixture is cooking, preheat the oven to 375 degrees F.

When the bean and meat mixture is finished cooking, remove the pork loin, pork belly and sausages from the beans to a cutting board and cut them into 1/2″ pieces.  Set aside.  With a slotted spoon, remove lamb pieces from the beans to the same plate.  In a 3-1/2 to 4 qt. baking dish or oven proof sauce pan, add a 1″ layer of beans to cover the bottom of the pan.  Add a layer of mixed meat pieces, making sure to distribute types evenly.  Cover the meat mixture with another layer of beans, add another layer of mixed meats, and finish with a layer of beans.

Carefully pour in the lamb juices and enough bean broth to barely cover the top layer of the cassoulet.  Mix the breadcrumbs and parsley, then sprinkle evenly over the top of the cassoulet.  Finish by drizzling the duck or goose fat over the crumb topping.  Bake uncovered for about 15 minutes until a crust has formed.  At that time, use a large spoon to break through the crust, spoon out some broth and pour over the crust.  Bake an additional 15 minutes, and repeat.  Bake until crust is richly browned, about 15-20 minutes. 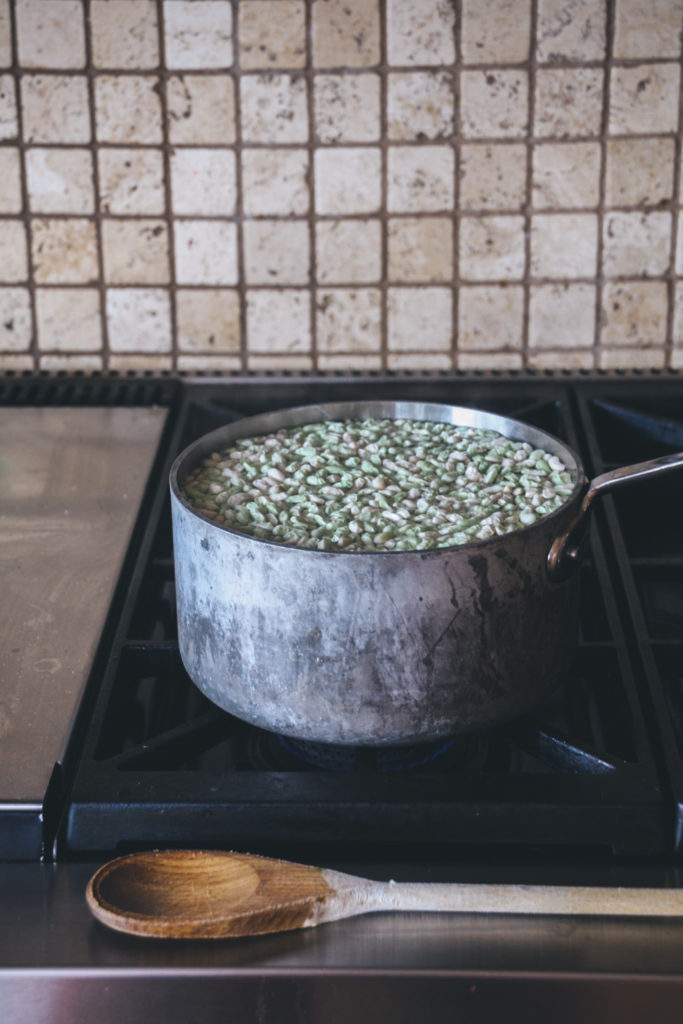 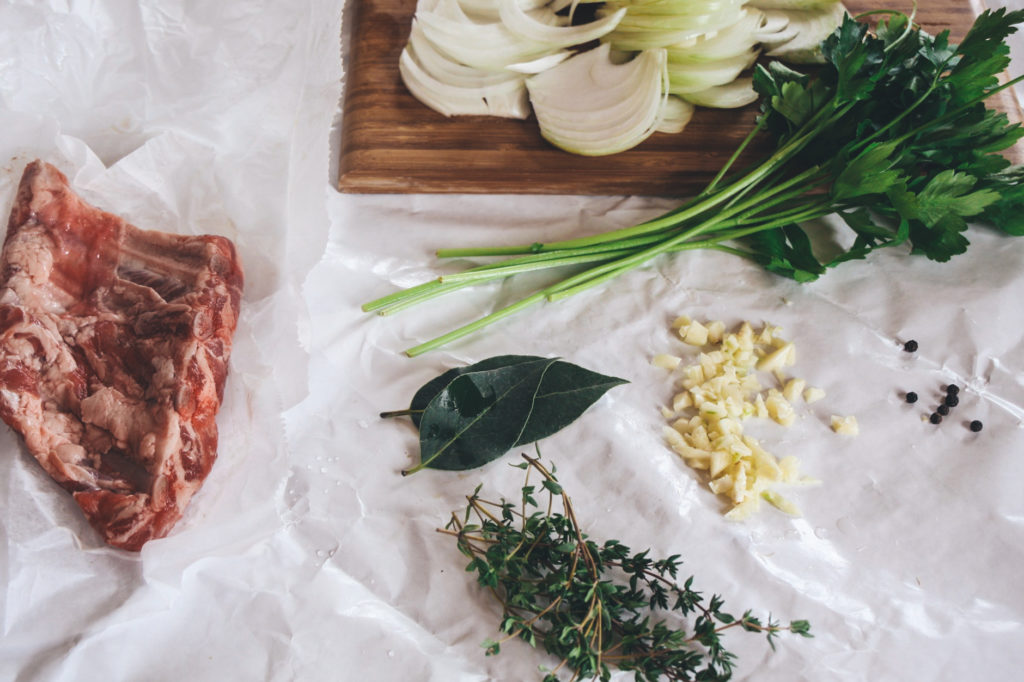 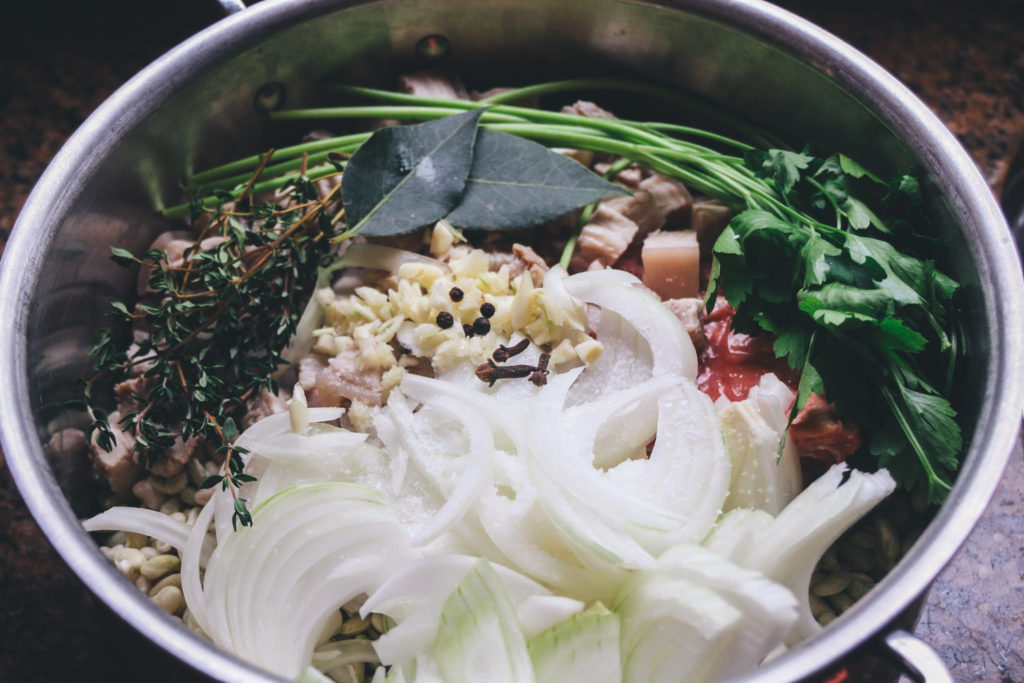 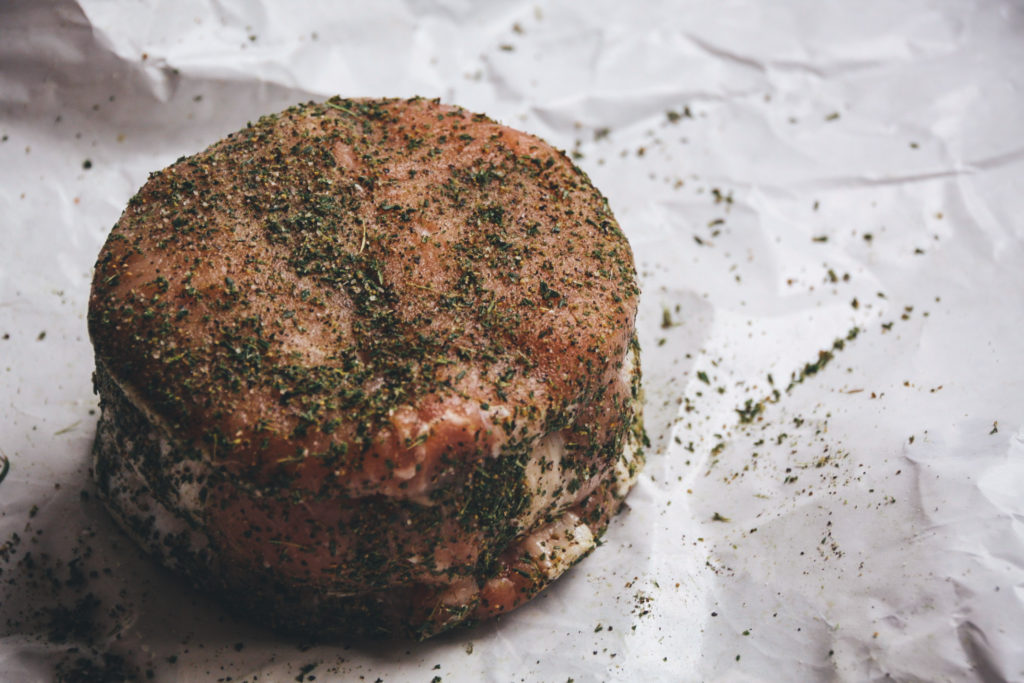 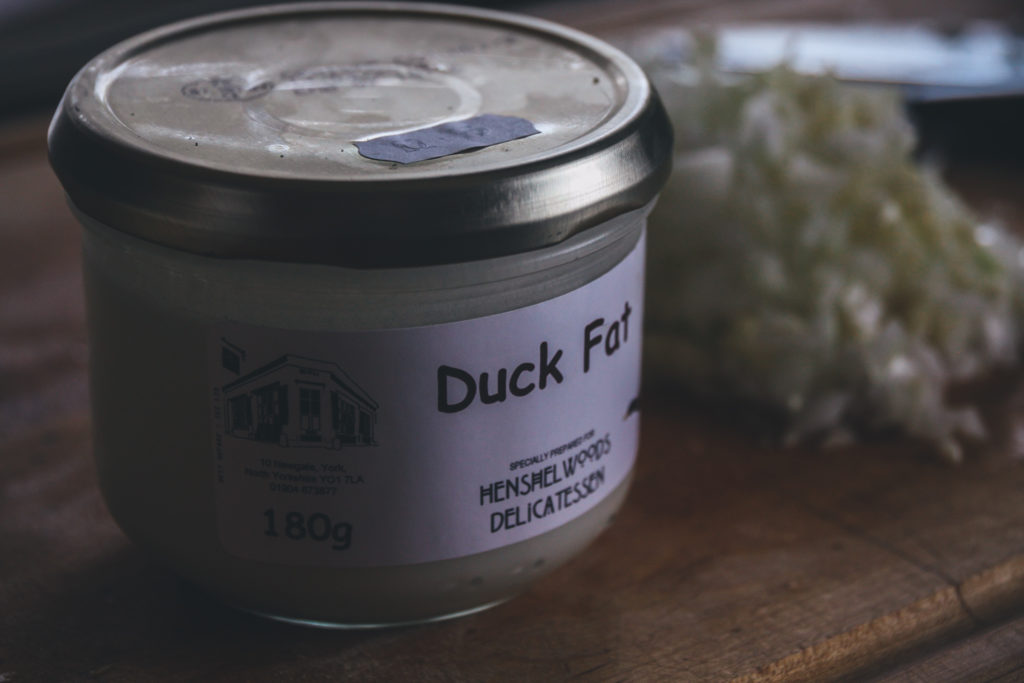 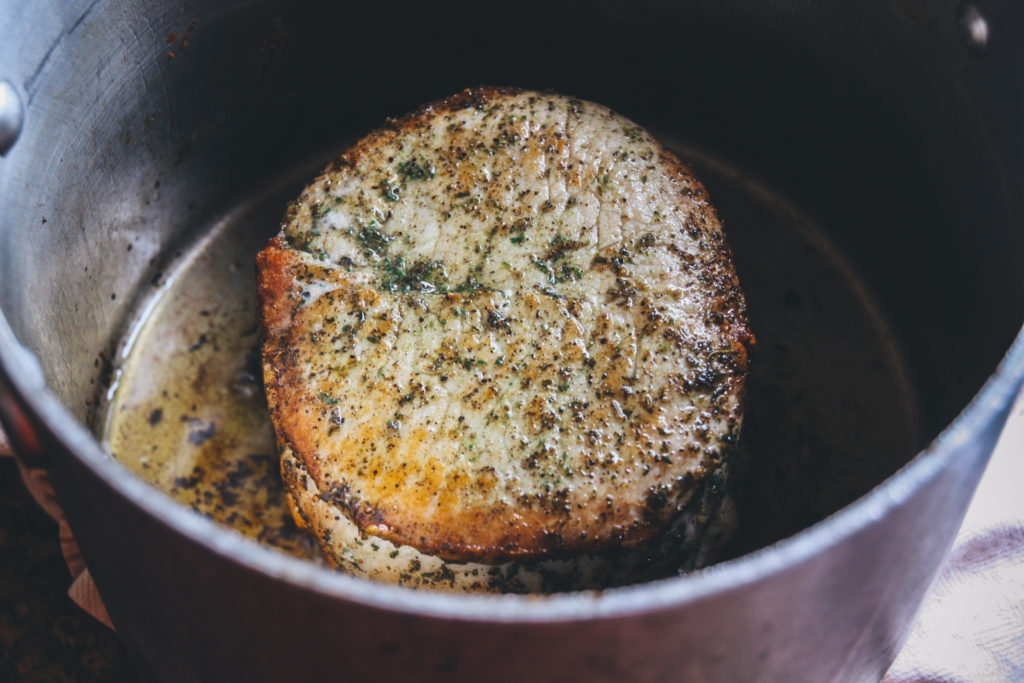 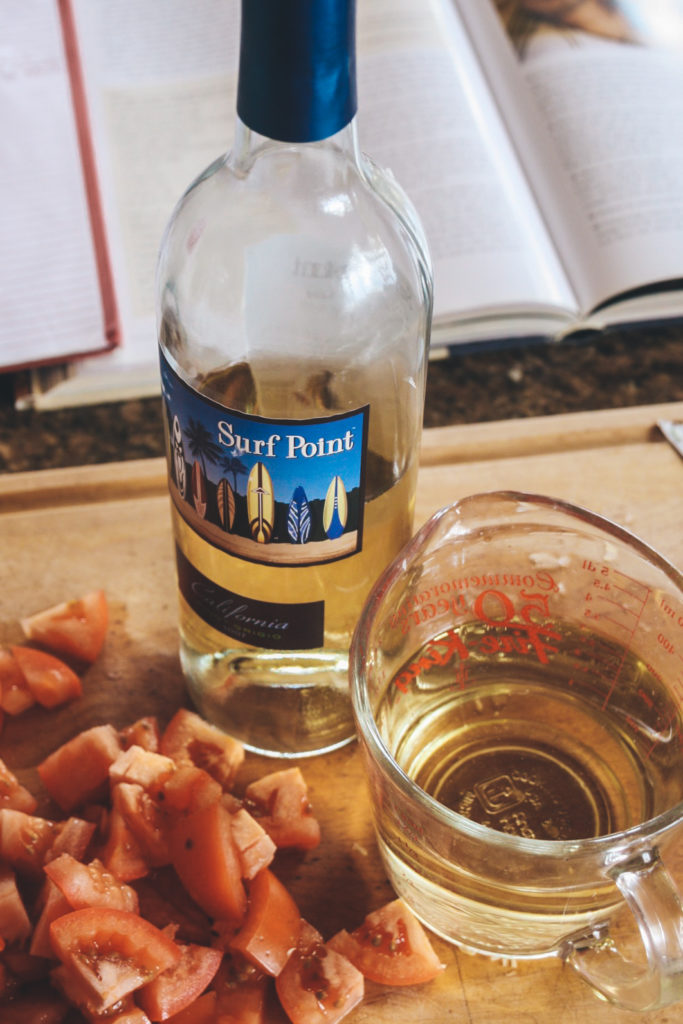 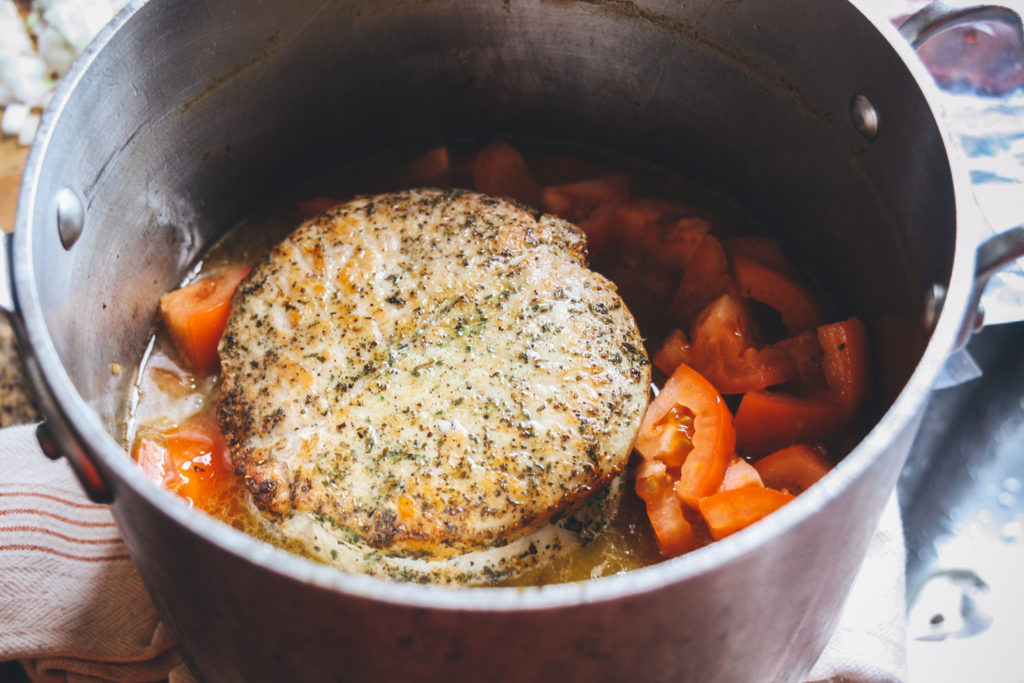 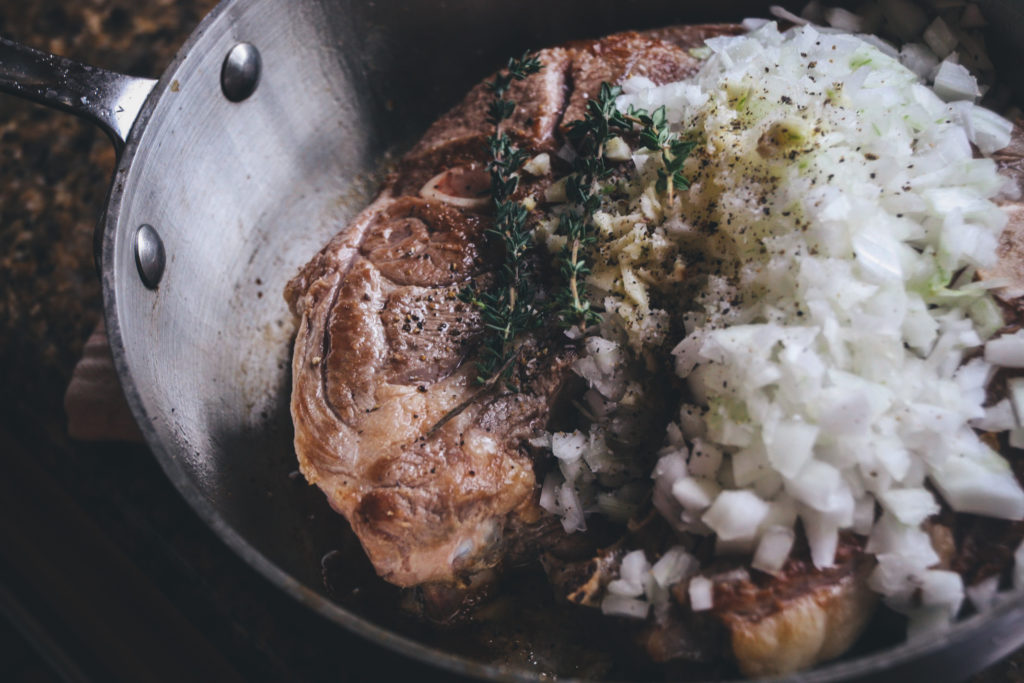 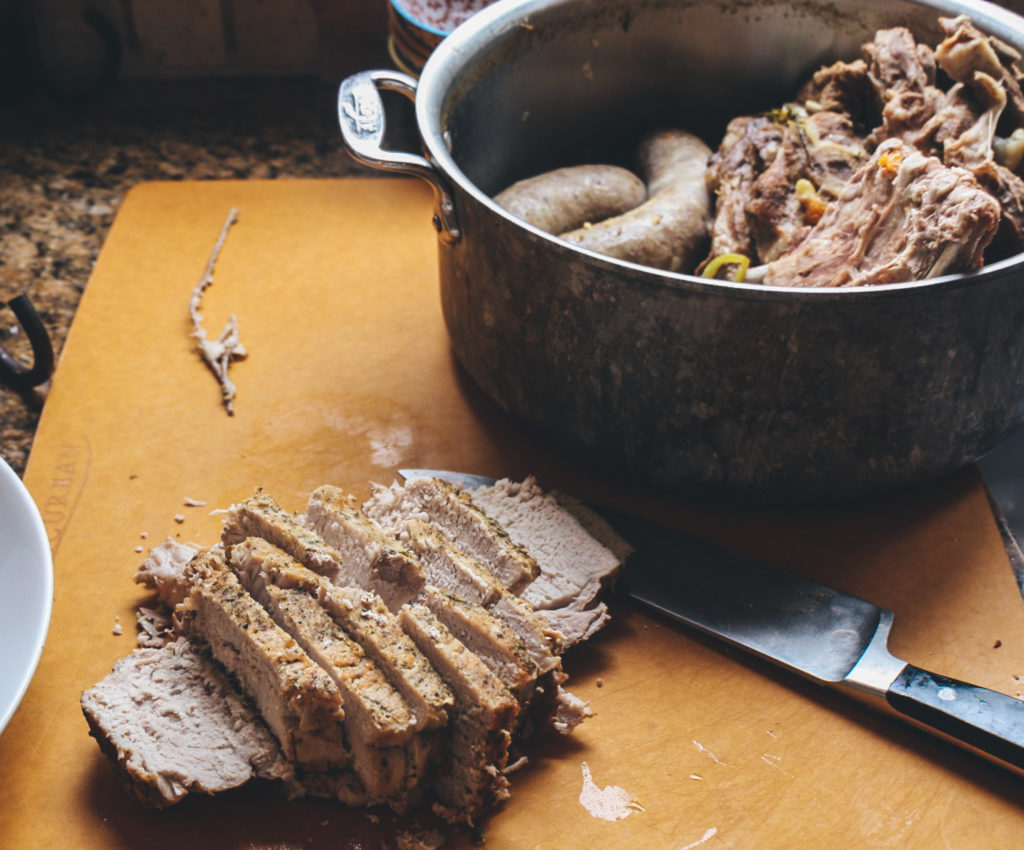 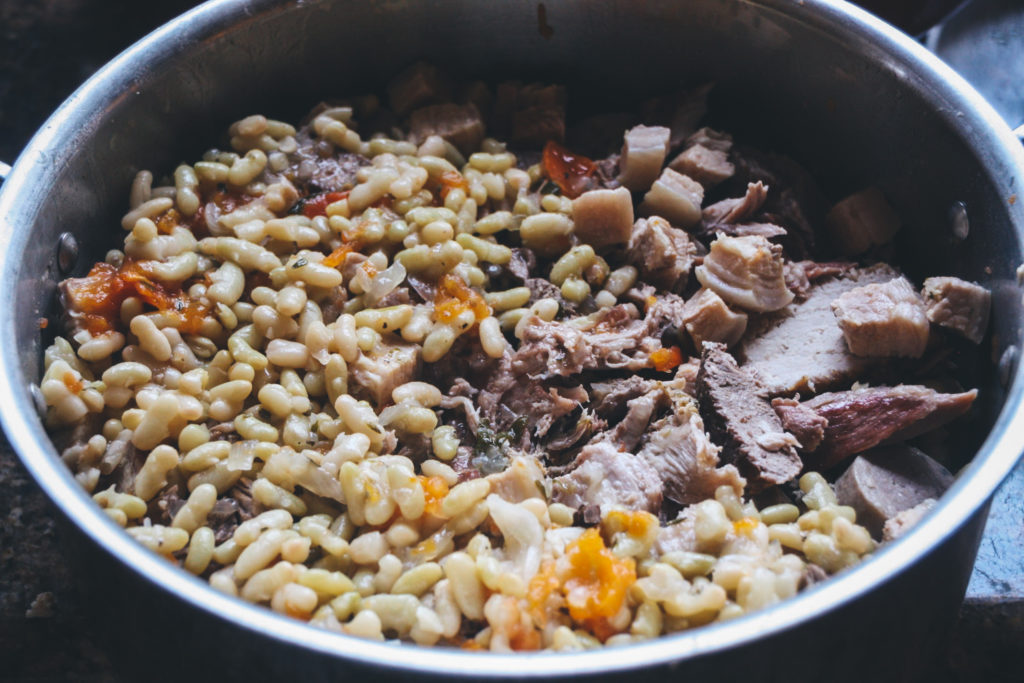 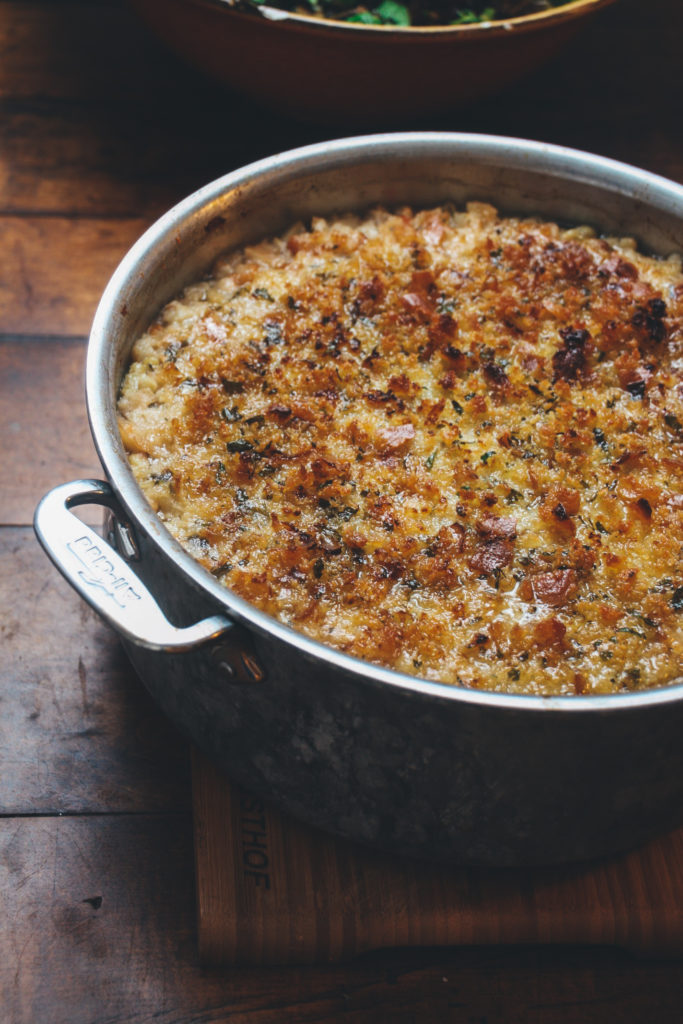 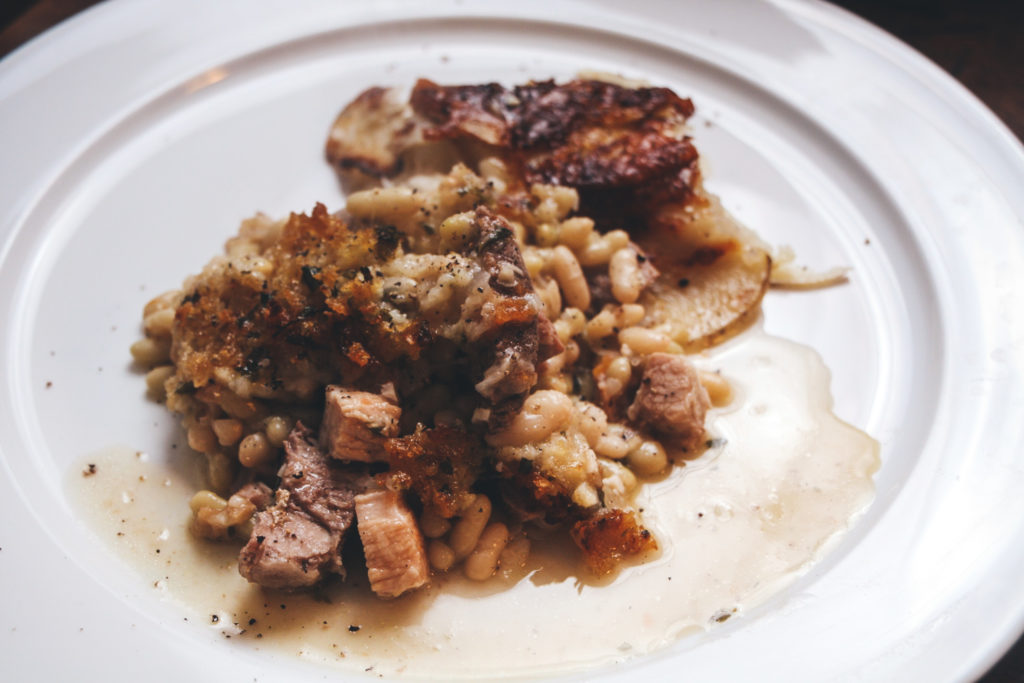