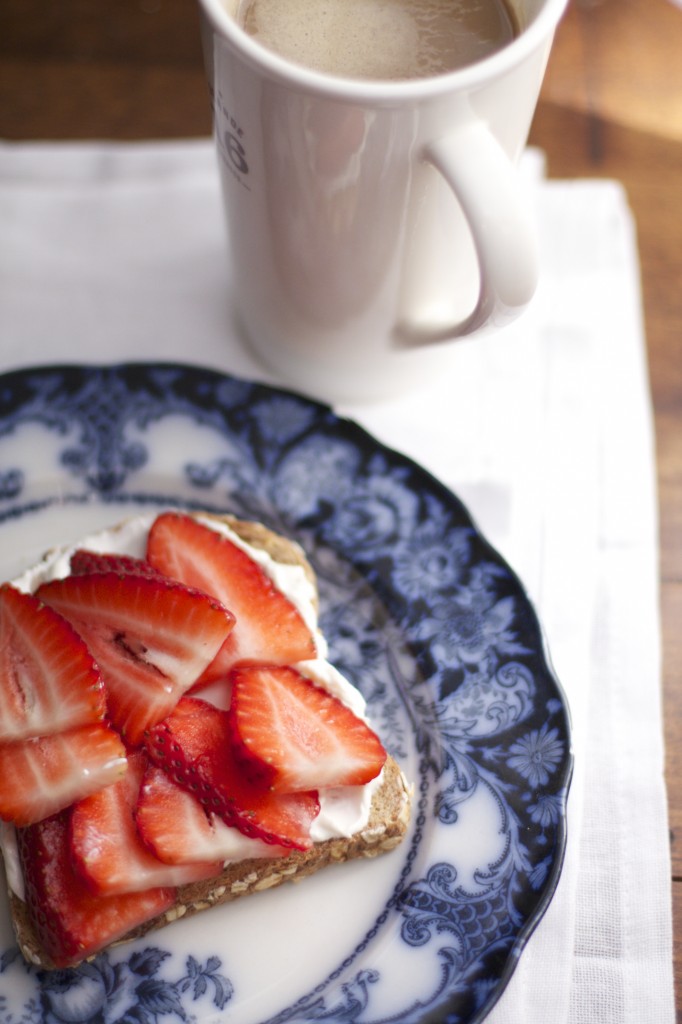 Kefir cheese with a bit of honey and sliced strawberries on sprouted grain toast.

For most of my life, my morning routine involved waking to an alarm set to sound well before the the sun had even thought about sending its rays to brighten the black horizon outside my window.  I was ready for work in less than forty minutes and shuffling out the front door with my coffee in hand, satchel thrown over one shoulder and purse over the other.  There was rarely a thought for breakfast of any kind unless I remembered to grab a cup of yogurt I could eat in the car — not the safest decision one can make.

Although I no longer have that routine, the habit of not eating breakfast has stayed with me and I’ve had to work to remember to eat before 9am each day.  I’m rarely hungry first thing in the morning, and once I’ve had coffee, that seems to delay any hunger pangs that remind me to eat.  I get busy with my day and then don’t think about eating until I look at a clock and realize it’s nearly noon.   I’m famished by that time so reach for something with little or no thought.  A portion much too large.  Something — anything with some nice rib-sticking carbs.

Two pieces of toast with butter and maybe some jam or honey for added flavor.  A cup and a half to two cups of cereal.  A piece of left-over cake or pie.  Perhaps another of the muffins I’d baked the day before.  Left-over white rice with warm milk, butter, cinnamon, and sugar.  Lots and lots of carbs.  I will admit the toast was always whole wheat or multi-grain and the cereal the likes of Raisin Bran or Wheaties.  And thankfully there wasn’t always cake or pie sitting around, but I think you get the idea.

Clearly, I needed to make some adjustments with the first being to actually eat breakfast early in the morning instead of at lunchtime.  Next, I needed to make sure there were better options available.  That meant I had to spend more time thinking about what to put in the cart when I was at the market.

Sounds like a lot of work, doesn’t it?  It’s not.  It’s become routine in the last couple of months and I’ve noticed the more I stick with it, the more ideas I get.  Variety seems to be the key for me because I’ll stay interested.  Otherwise, I’m afraid I’ll ease back into my old habit of skipping breakfast.

What do you eat breakfast every day? 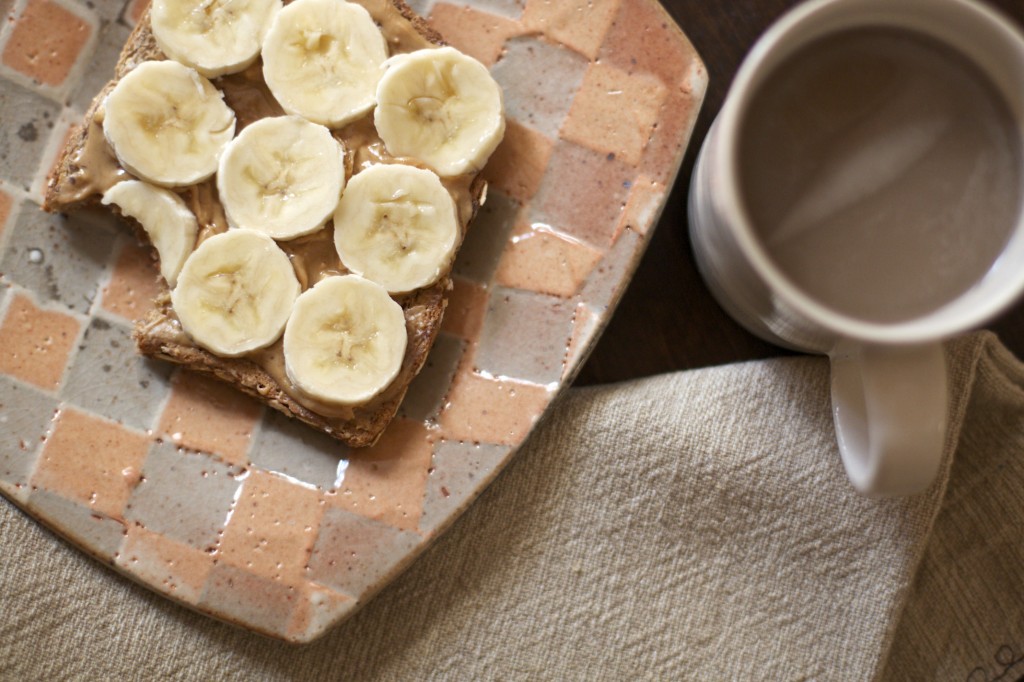 Half a banana with chunky peanut butter on sprouted grain toast. 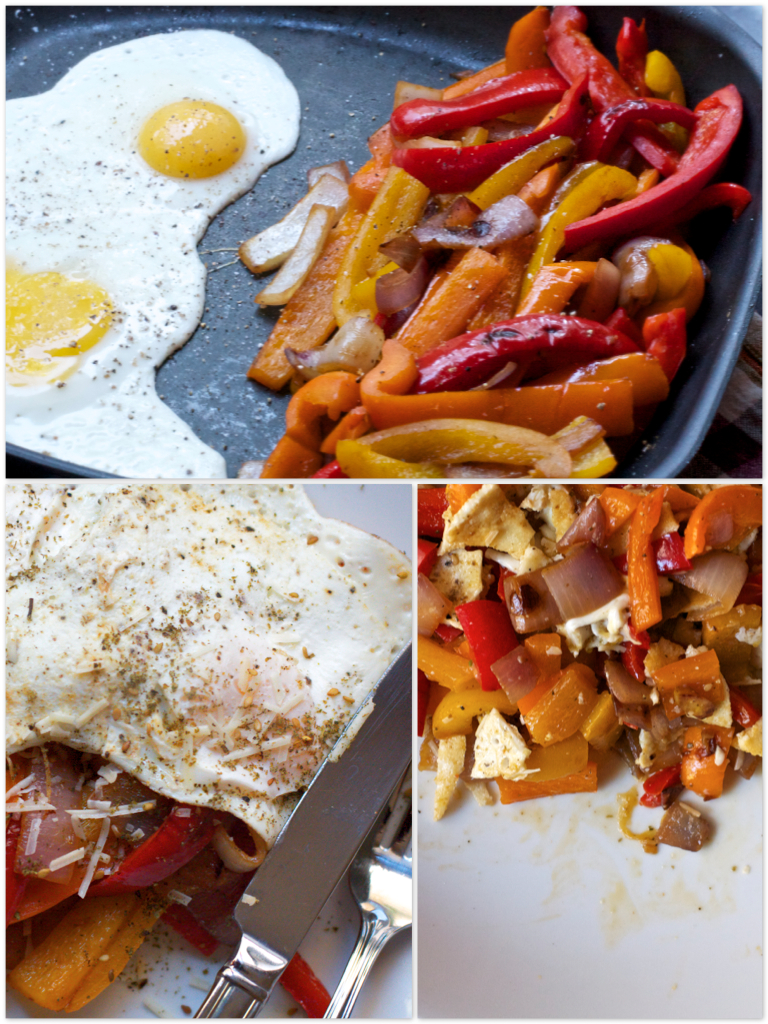 Sweet peppers and onions sauteed in a dab of olive oil, two eggs over easy sprinkled with an herby seasoning and some Parmesan. 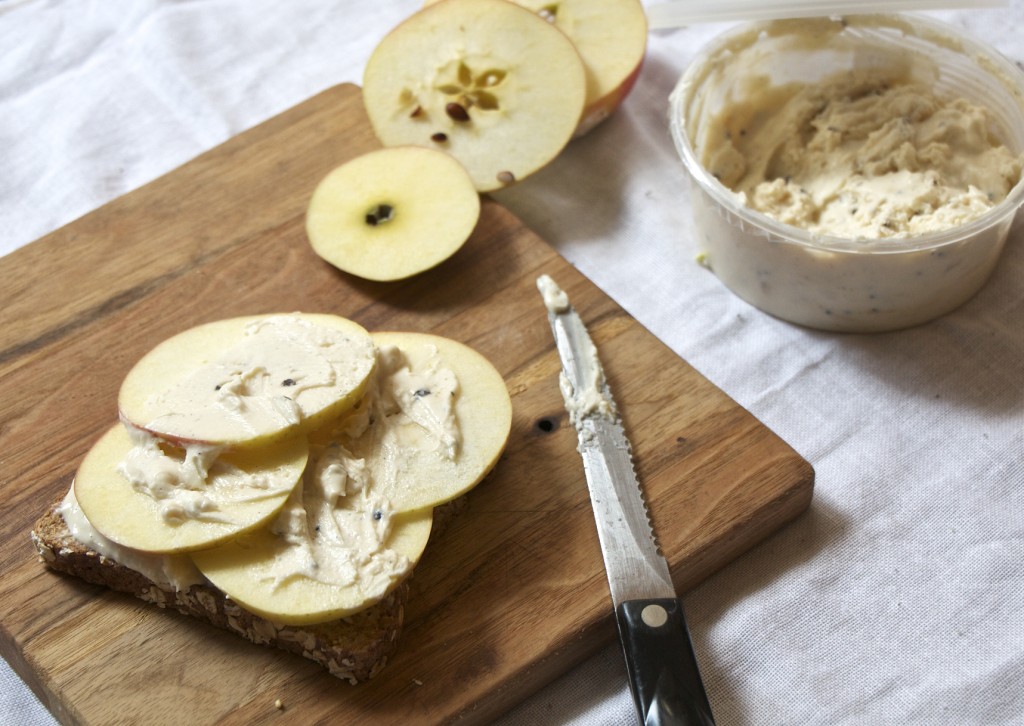 I just bought the quark at the farmers’ market and think I’m in love.  This is flavored with vanilla bean and is heavenly.  I understand it can be homemade… 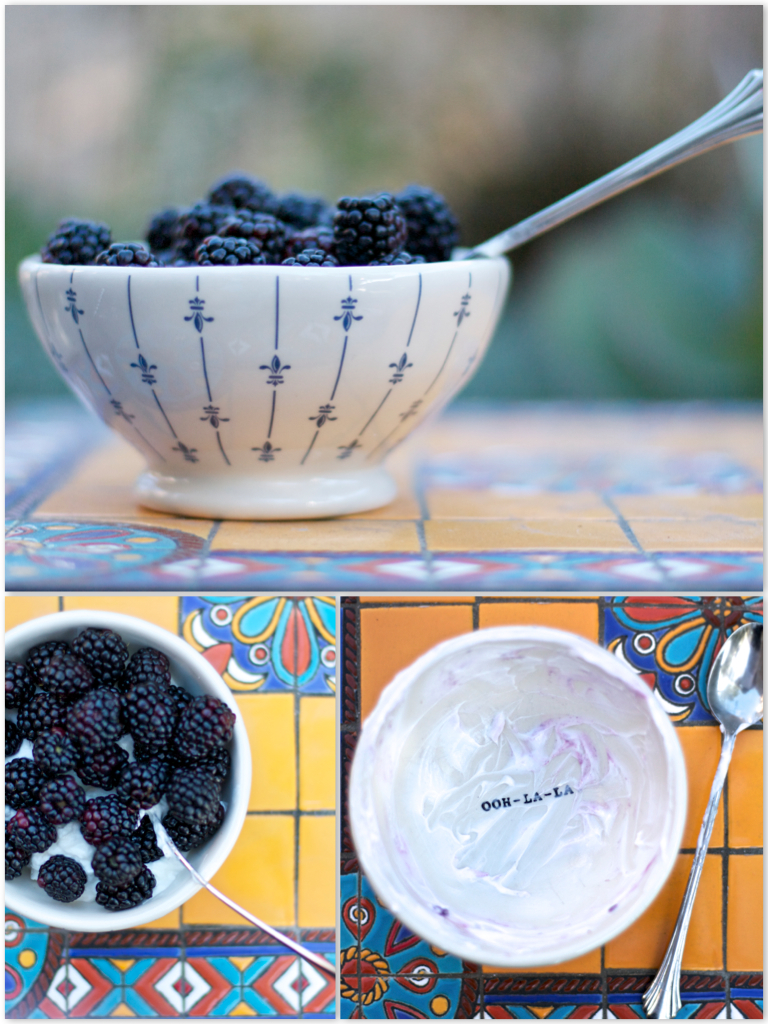 One cup of blackberries — or any berries — with a cup of non-fat plain Greek yogurt.

At first I had to drizzle it with a bit of honey or agave nectar, but not any more.  I mash the berries up and stir it all around before I dig in. 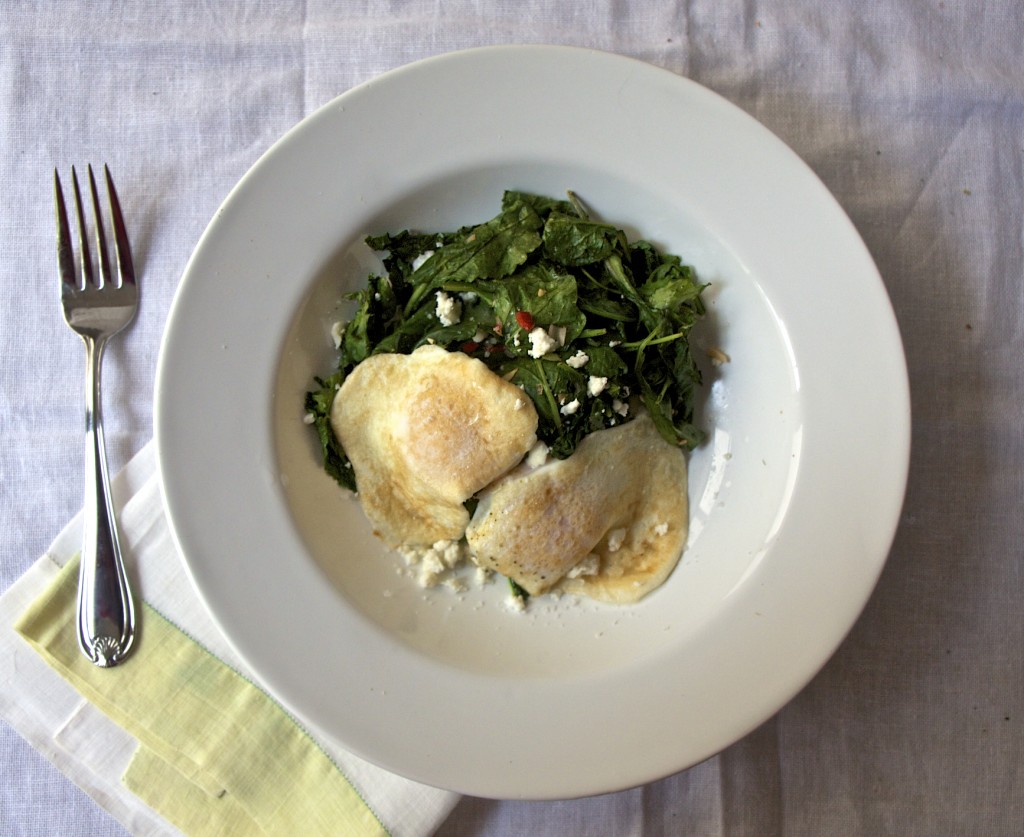 Kale or spinach sauteed with a bit of garlic and red pepper, two eggs over easy with a sprinkle of homemade goat’s cheese. 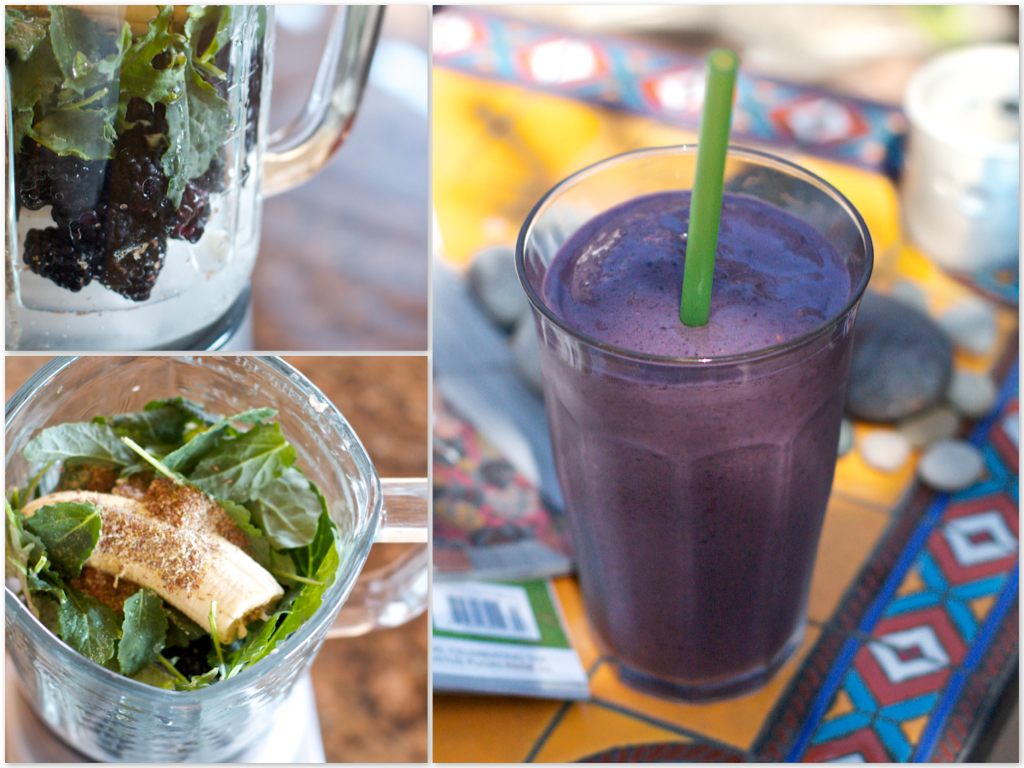 It changes, but generally it contains two handfuls of ice cubes, a cup of Greek yogurt, a cup of berries, a half banana, a good sprinkle of ground flaxseed, and a few glugs of sparkling flavored mineral water.  The greens aren’t always there.  It depends on what else is in the meal plan for the day.  Sometimes I use an apple instead of the berries.  Occasionally an orange or tangerine. 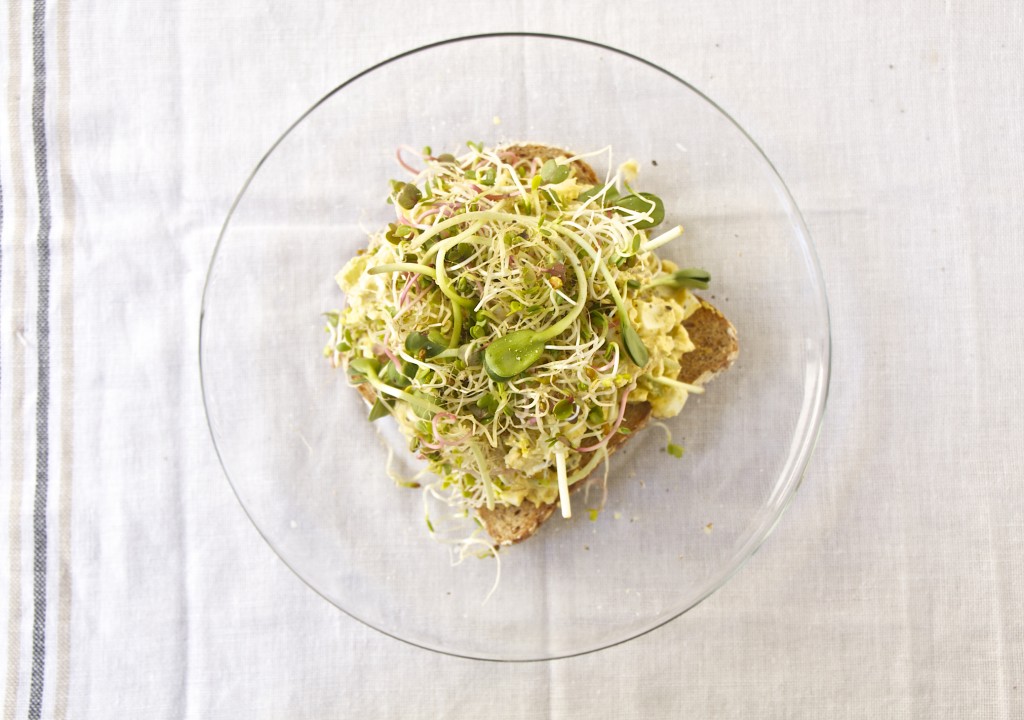 The egg salad is a mix and match of many recipes I’ve tried but is made with kefir cheese instead of mayo.  There are apples in it, pecans, celery, and onions.  Make it ahead and it’s in the fridge ready for breakfast like this, or for lunch wrapped in lettuce.  Delicious! 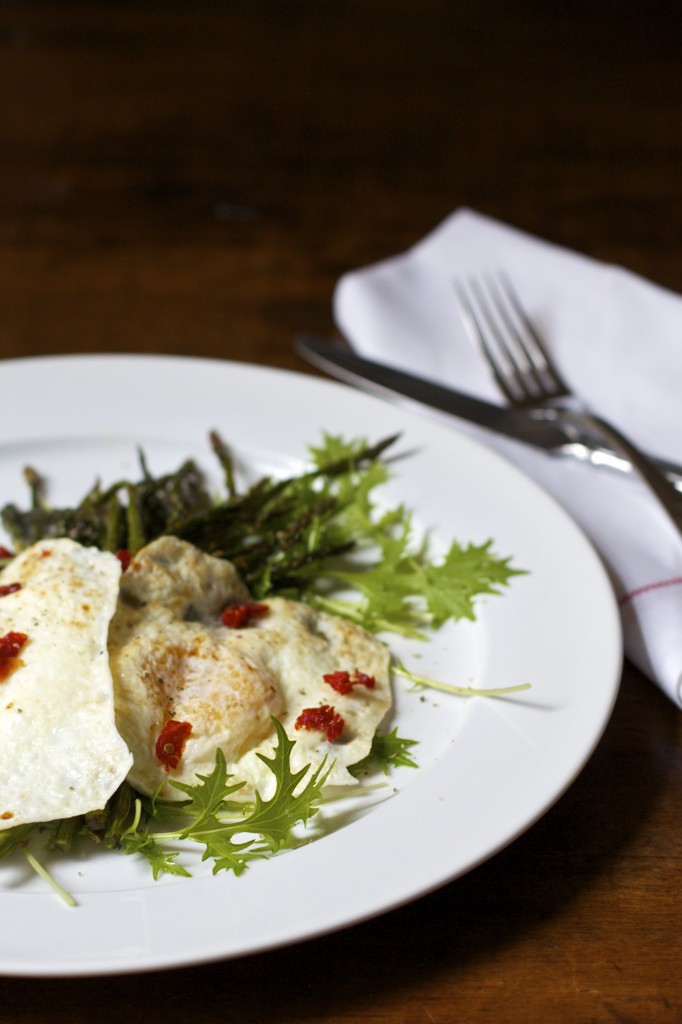