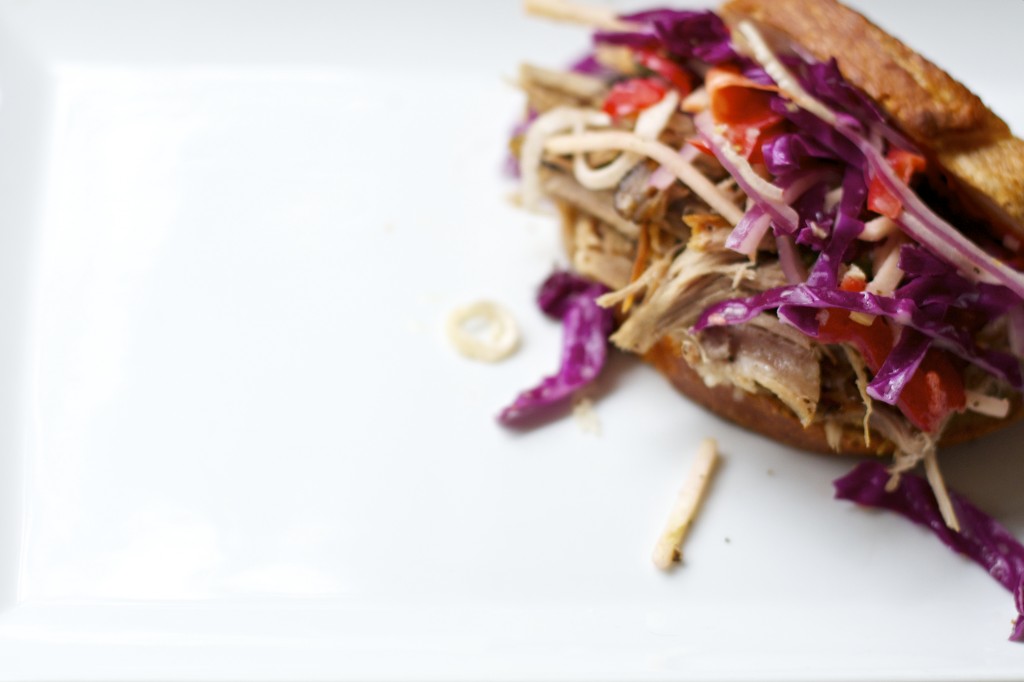 Often when I’ve had the time to prepare a large cut of meat like the recent whole pork shoulder I rubbed with spices and slow roasted in the oven, I do it with ulterior motives.  Like making meatloaf so I can have a sandwich a day later.  Or braising a piece of beef chuck so I can slather mustard on crusty slices of bread to wrap around cold pieces of the simply prepared roast that was a childhood favorite.

I won’t deny that sitting at a table with friends and family to enjoy a meal of roasted, braised, or grilled beast is the best of occasions, but there’s something to be said about that one-of-a-kind sandwich at the other end of it all.  One I can’t have if all the work doesn’t happen first — or worse — yields no leftovers.  Waiting the best of several days for a 10 lb. cut of pork to thaw if it’s been in the freezer, then sit dressed in its dusty spice covering to finally roast over a pan of apple juice for hours is all worthwhile when I know I’ll be able to bite into a pulled pork sandwich.

As much as I can say I’ll take a nicely stacked sandwich any day if the right ingredients are wedged into those layers, I’m fairly new to pulled pork. Most of the pork I ate growing up was in the form of bone-in chops my mother fried in a cast iron skillet with a sprinkle of salt and pepper.  I remember enjoying the flavor of those chops, but the texture always seemed dry so they were never a favorite.  Because I ended up being the family cook at an early age, I can tell you the dryness had to do with the length of time I was told they had to cook — sitting in a hot frying pan to brown for 30 long minutes.  I think I began to buck the system around junior high when I decided to use a lid and lowered temperatures to keep them from turning to leather.  I also remember switching to a blade cut which came off the shoulder instead of the loin.  It’s all about that fat.

But there was something I didn’t like about the fat around the chops that crisped as they fried — the crispy fat my mother enjoyed.  I remember her rescuing the pieces I’d cut from my chop, popping them into her mouth while I cringed at the thought of chewing on a solid piece of fat.  In spite of what we’re told about eating saturated fat, at nearly 75, my mother’s blood pressure, heart, and arterial health are considered excellent.  Suffice it to say she didn’t eat pork fat — or any fat with any degree of regularity.

A little pork fat goes a very long way with me — I even like my bacon lean — so a slow roasted pork shoulder where the marbling of fat melts to tenderize the meat is perfect.  Perfect as in a sandwich filled with layers of it nestled underneath a just right slaw.

A little bit of sweet, then tart, a touch of heat, and a whole lot of crunch work quite well with the pork.  It’s far from traditional, but that’s why I like it.

If you’re someone accustomed to pulled pork treated to a dousing of sauce, I’d understand if you cried foul here, but I think this is worth a try.  Sometimes when something is sauced, that’s all I can taste, and then there are those added calories which always seem to include sugar of some kind and lots of salt.

Load the bread with the spiced pulled pork shoulder, load even more of the veggie slaw, and take a big bite.  Or skip the bread all together and make a salad. 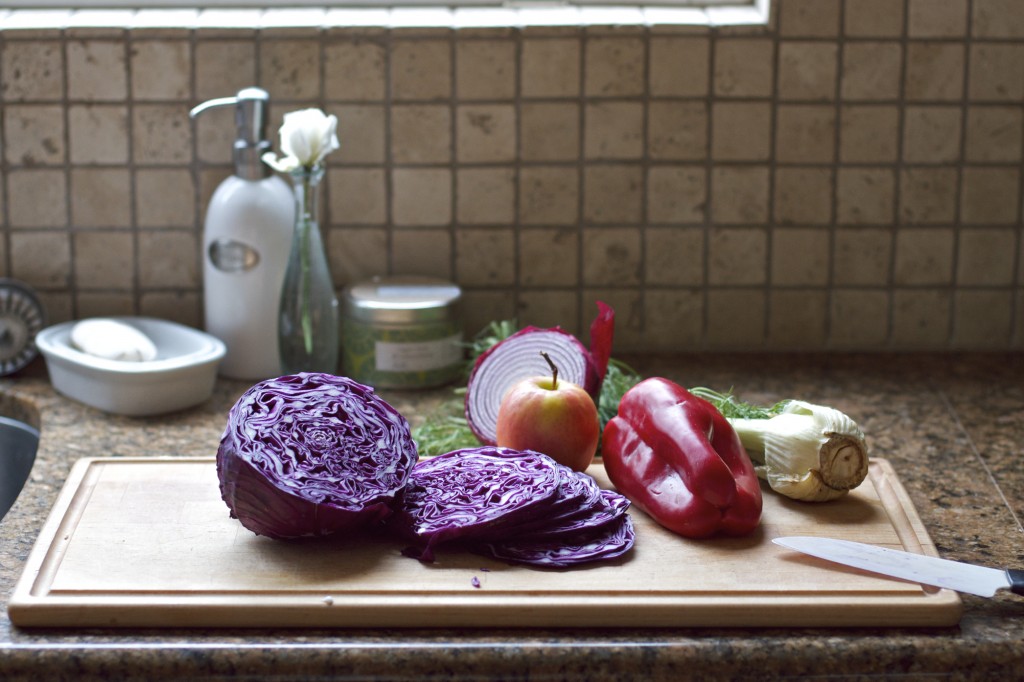 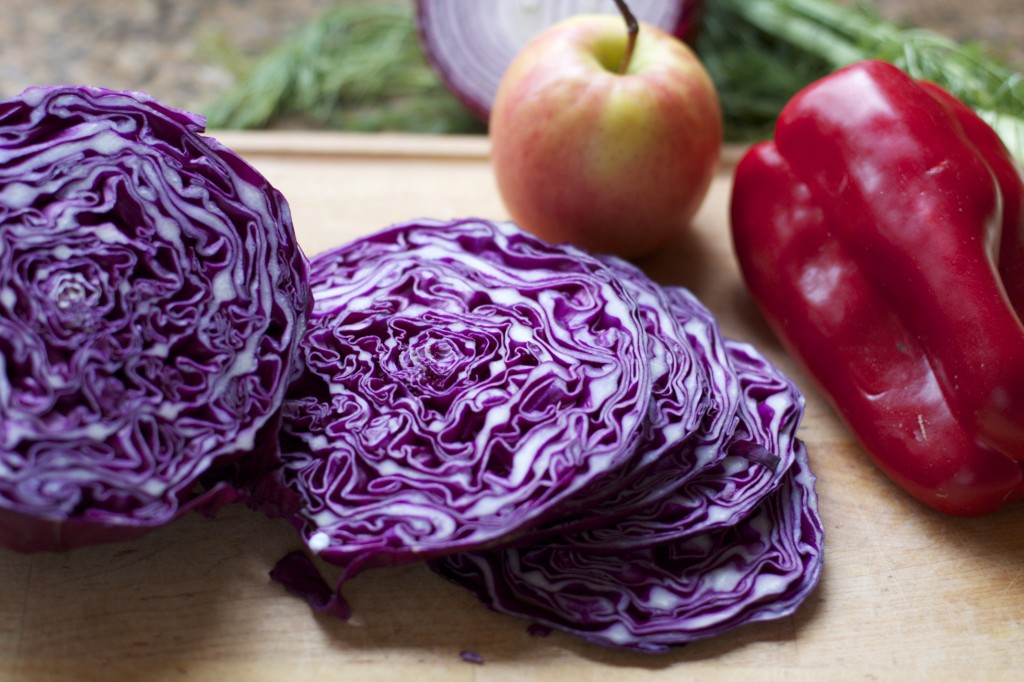 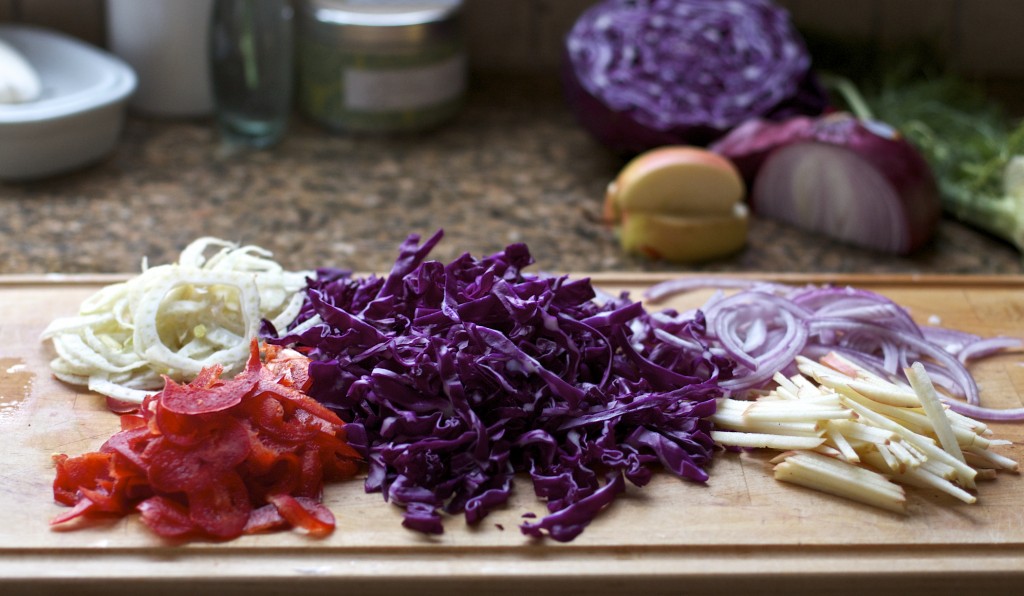 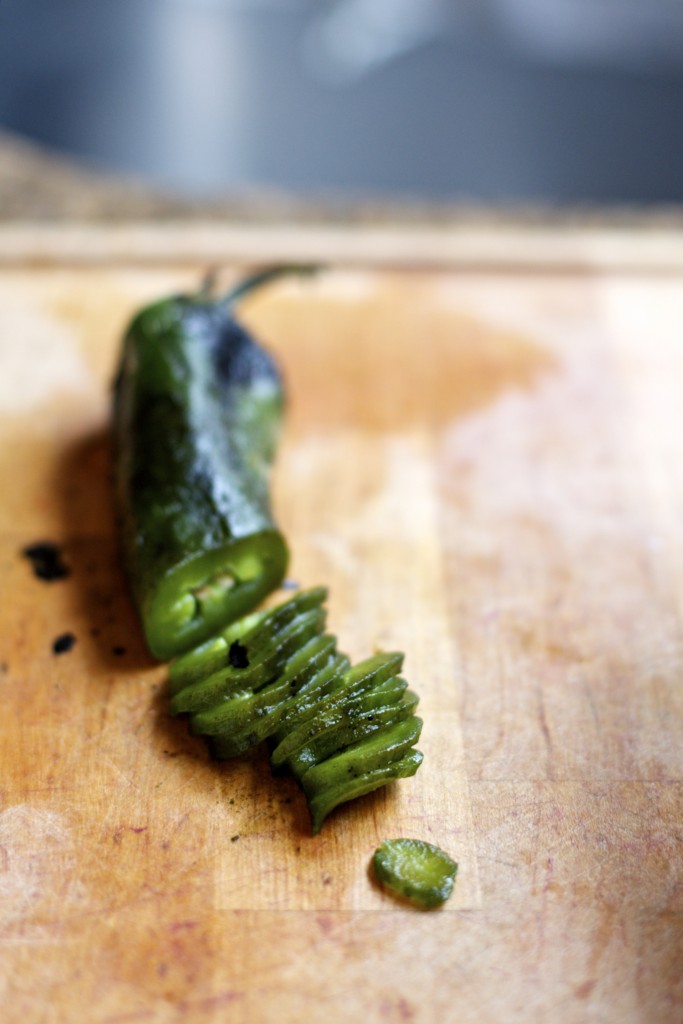 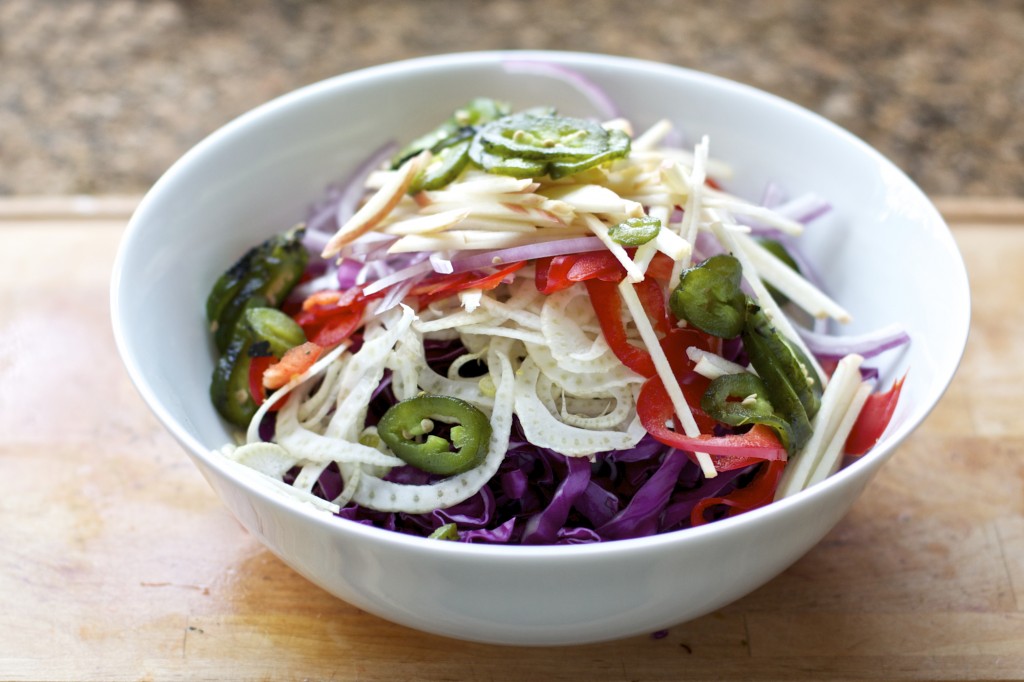 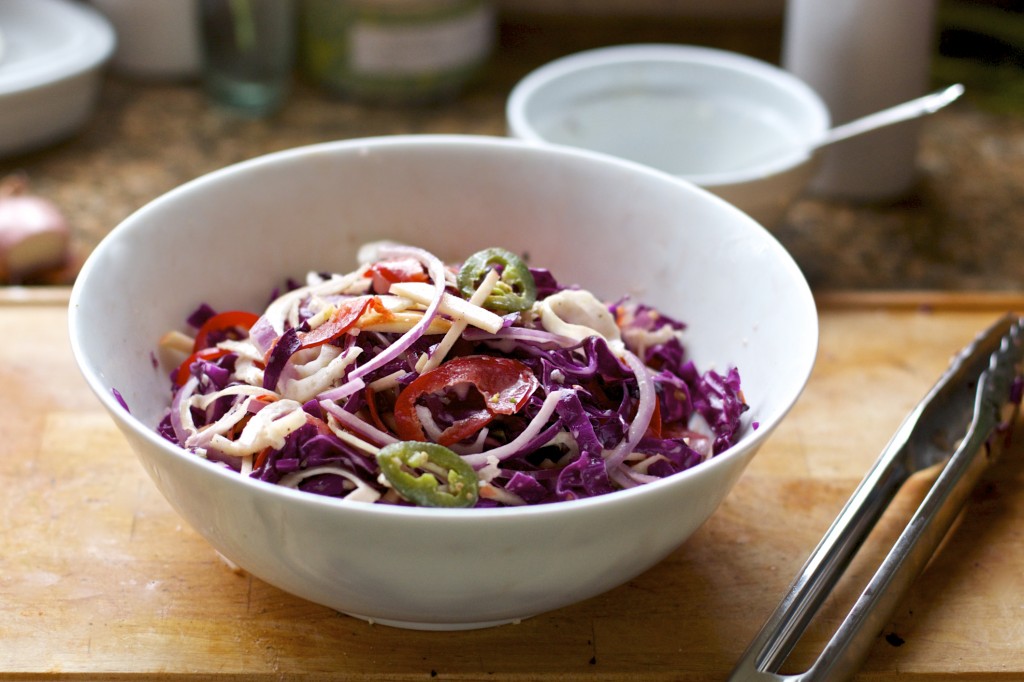 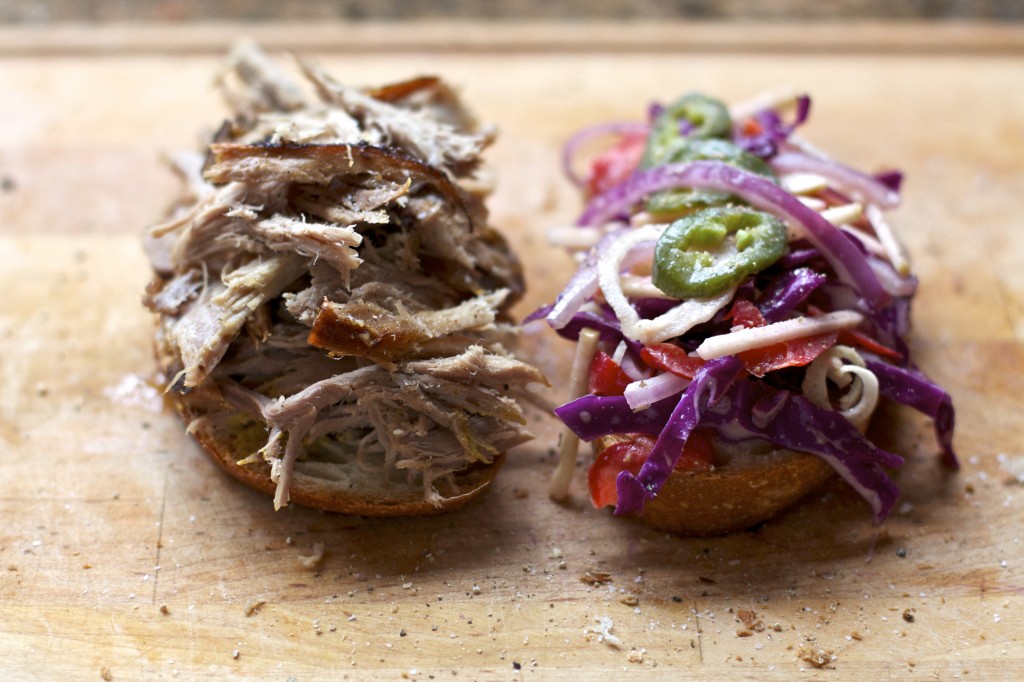 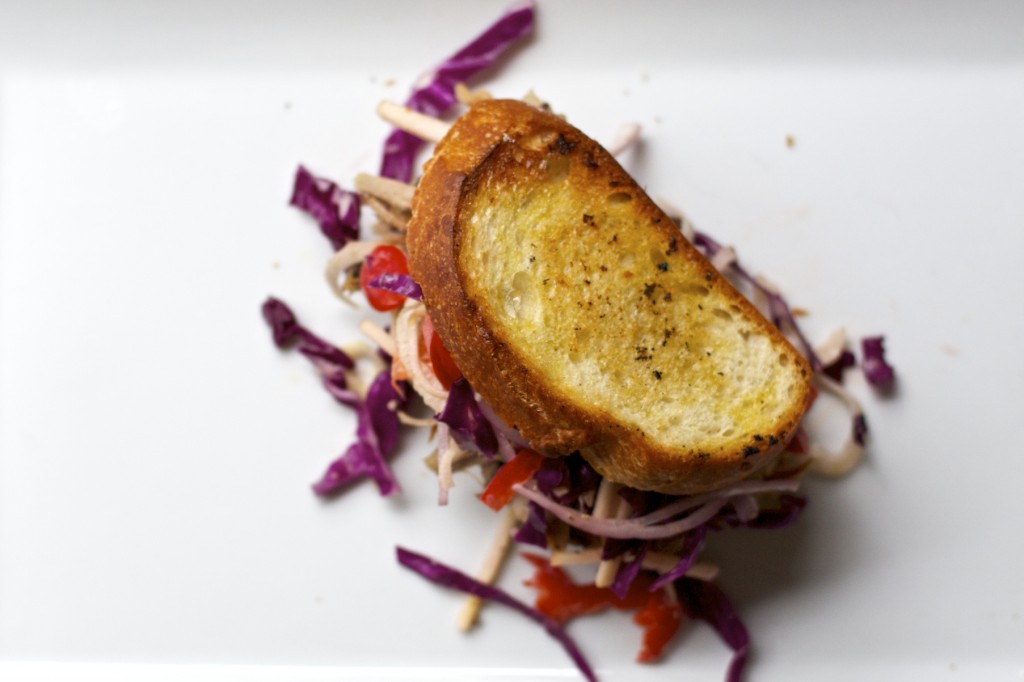 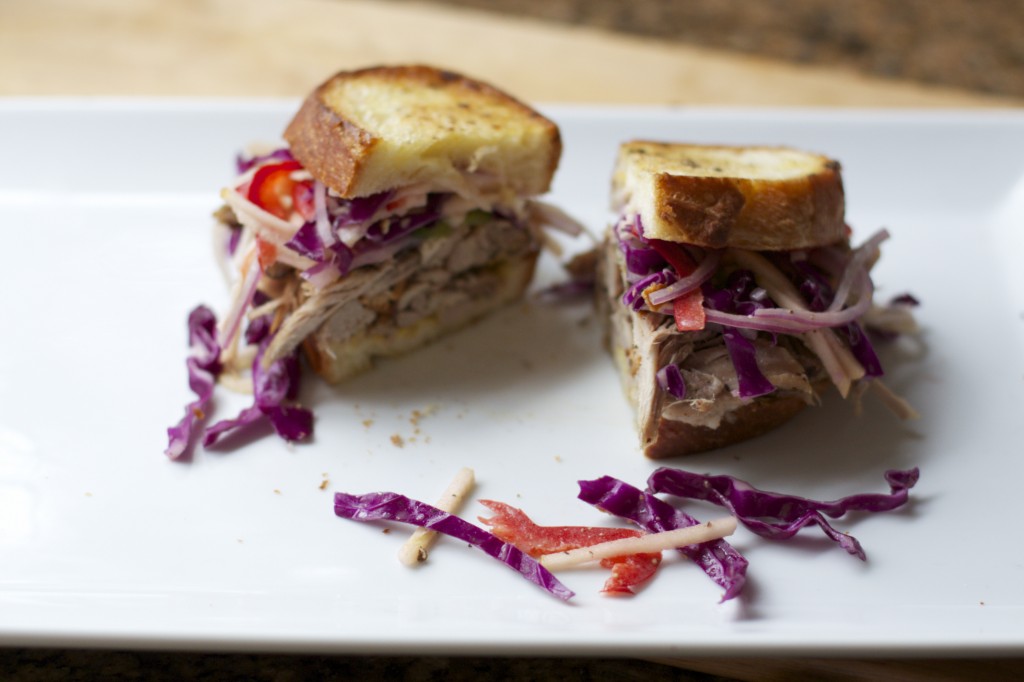