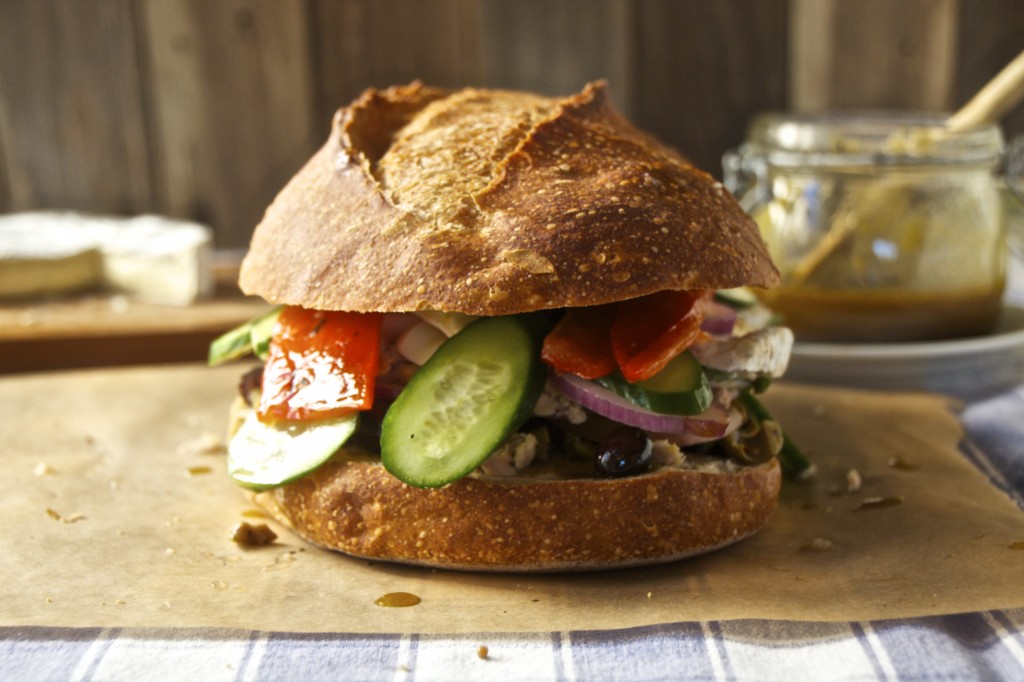 The last few days of our recent vacation, we stayed at Bay Cottage, a lovely retreat located on the shore of Discovery Bay near Port Townsend, Washington.  It seems like I’ve wanted to stay in a place like that forever — somehow making up for the lack of a family summer vacation rental that so many others seem to have had.  If I think about it, the others I’m thinking of were most likely characters in summer reads, or old movies which makes me idealistic, I guess.  No matter, because it was beautiful there and we enjoyed sitting in the old Adirondack chairs in the evening marveling over how long the daylight lasts at this time of year, or watching the fog slowly burn off the still water each morning.  Large blue herons  stand in the shallow water at low tide like statues, patiently waiting for a fish.  It was so peaceful.

We’ve enjoyed a variety of vacation rentals in our travels.  They’re much more relaxing than staying in a hotel because a television is usually absent, there’s a living room to sprawl out in just like home, and after the daylight is gone, we go through the cards and games usually stashed away in a cupboard somewhere to enjoy a few rounds of Rummy or Trivial Pursuit.  We also take the time to read for extended periods of time, enjoying the stillness.  Outside of the water lapping against the shore, not much else broke the quiet in the evenings, which is a rare thing to enjoy.

Having a kitchen available is another vacation rental perk.  It’s usually stocked with a variety of pots, pans, and utensils and even some pantry basics to add to the groceries we shop for soon after arriving.  I know that others often question cooking on a vacation, but honestly, it’s far less trouble at times than deciding where to eat — especially when money can be saved cooking for ourselves.  It also makes packing a picnic easier when planning a day trip because if you plan with that in mind as you hit the market, then you can enjoy some pretty tasty treats on your outings.

Pan Bagnat (pahn-bahn-yah) is the perfect make ahead picnic food because other than needing to boil a few eggs, open a can of good tuna, slice vegetables, and prepare a simple vinaigrette, all you need is bread and some bricks — or in my case, weights.  On the other hand, if you’ve got children, you might consider using the weighting technique mentioned in this version of Pan Bagnat published in the New York Times.

Each bite of this wonderful sandwich is a treat whether you’re enjoying it at home or otherwise — and it’s fun to make.  Have you had Pan Bagnat before? 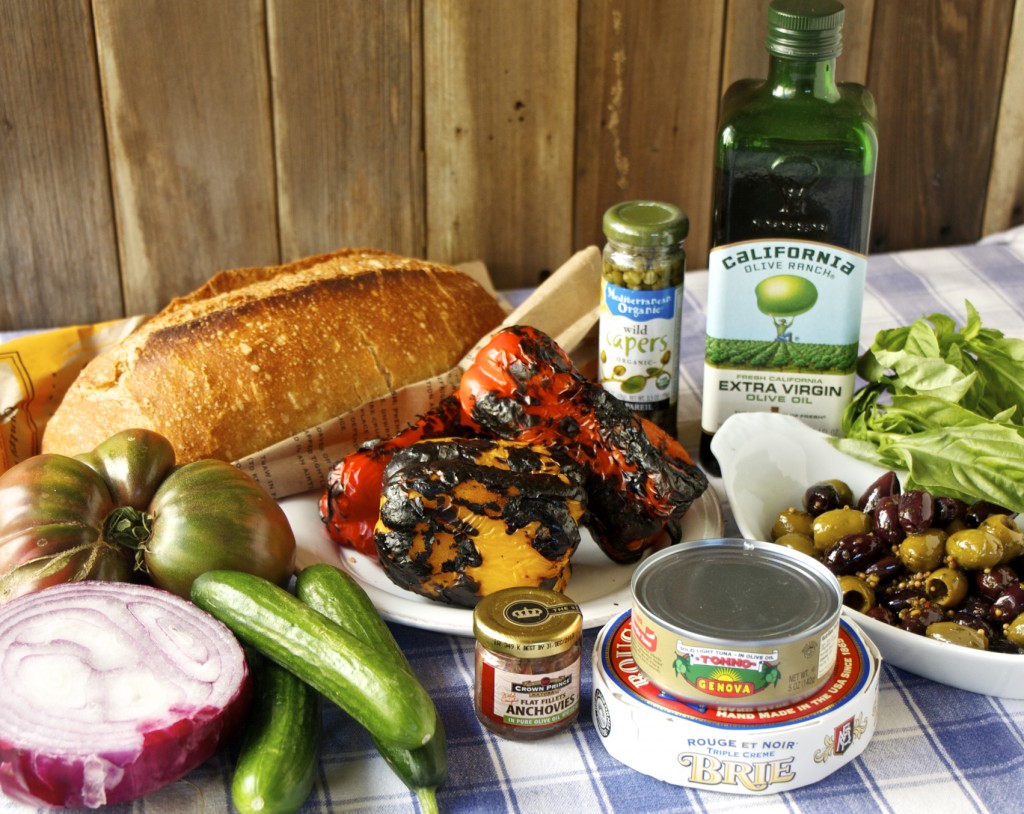 1 can of good tuna packed in olive oil, un-drained

basil, about a hand full

Brie, enough slices to cover one side of the loaf 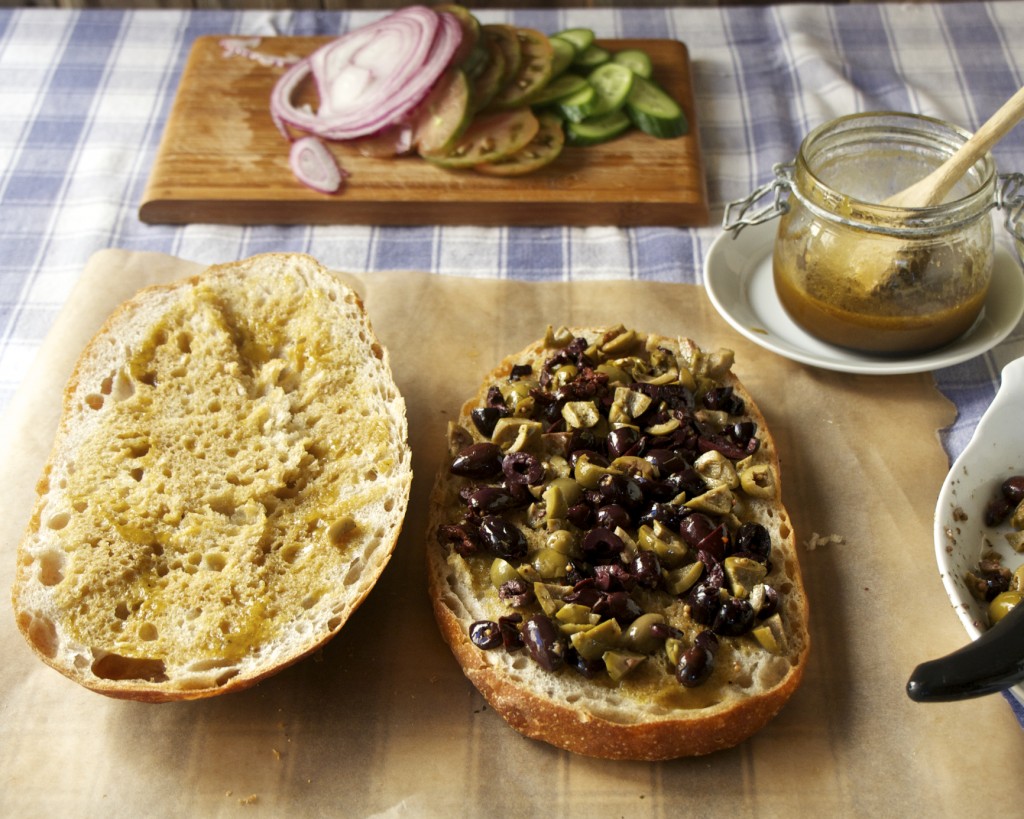 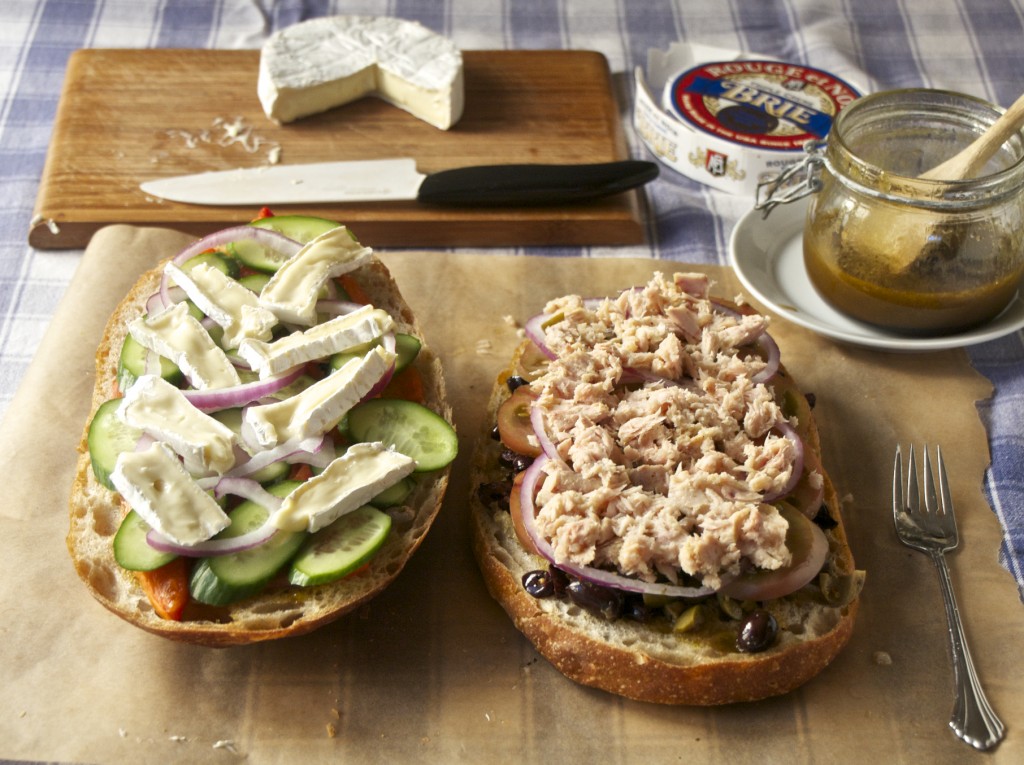 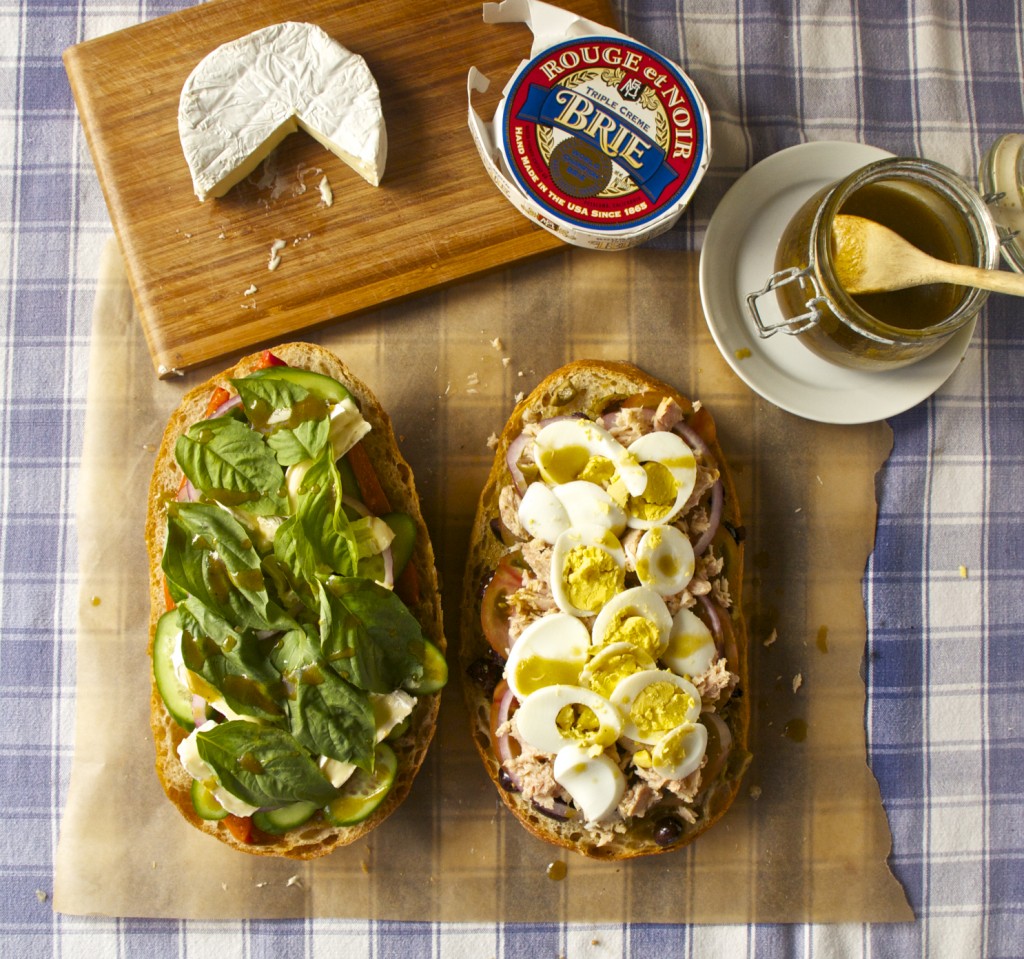 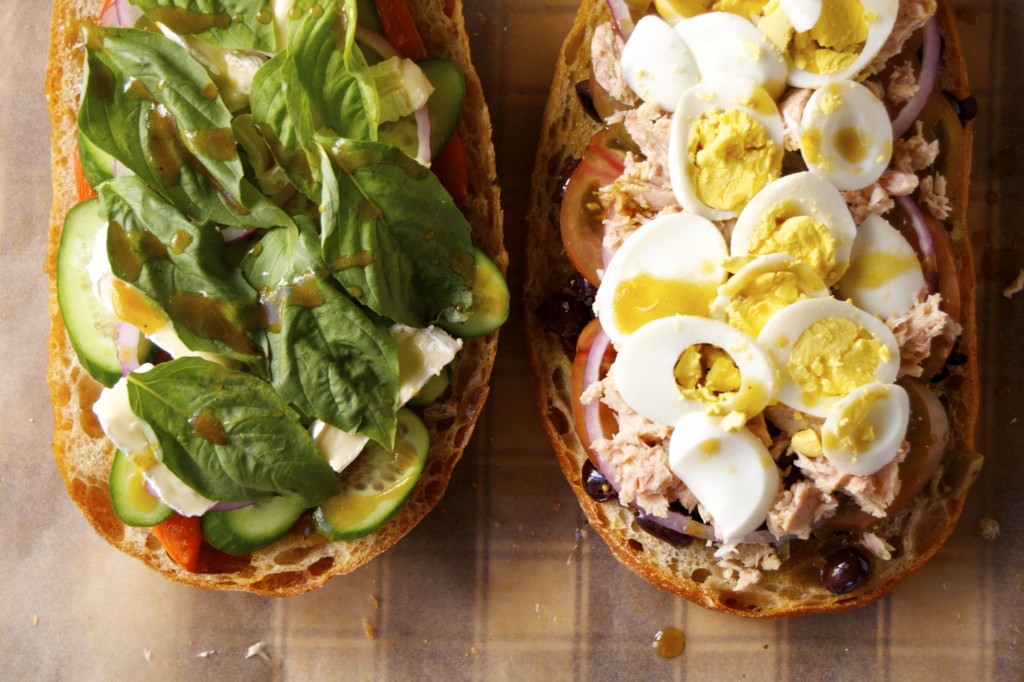 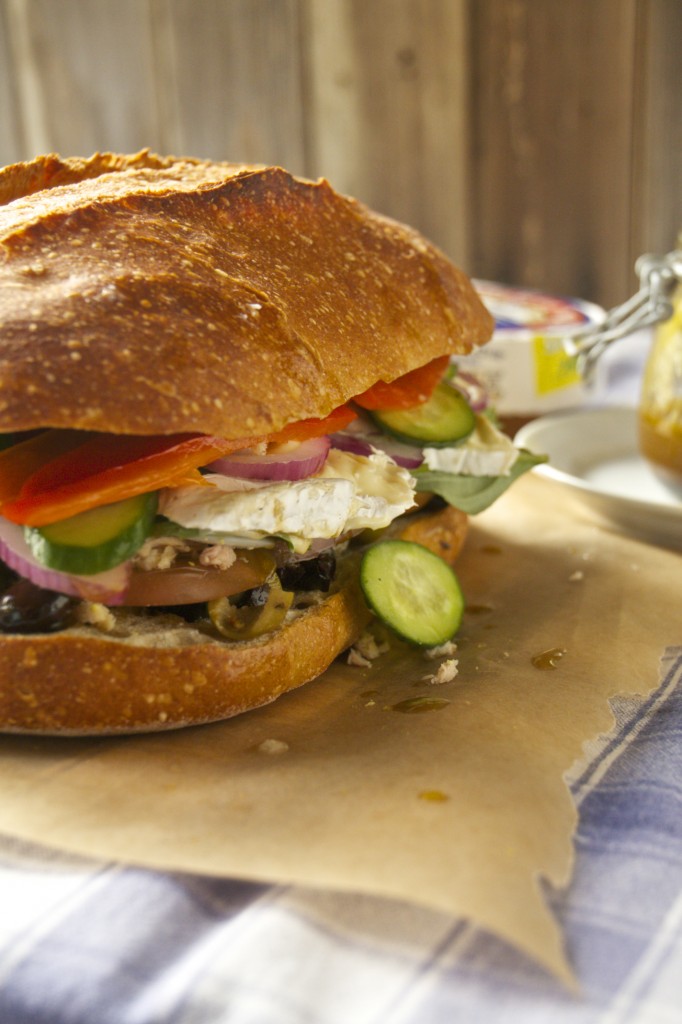 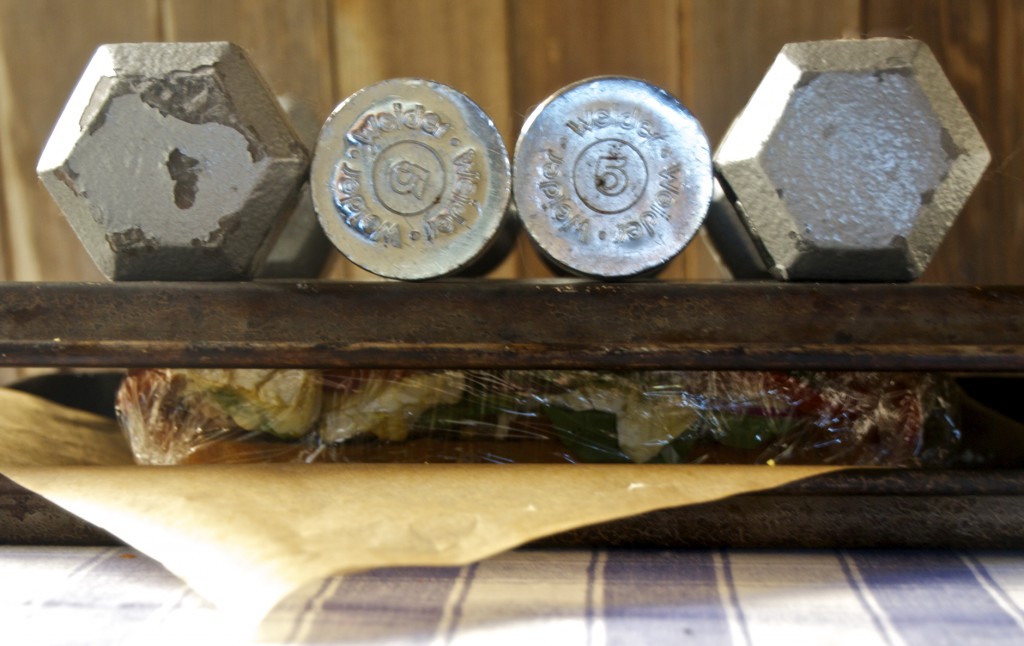 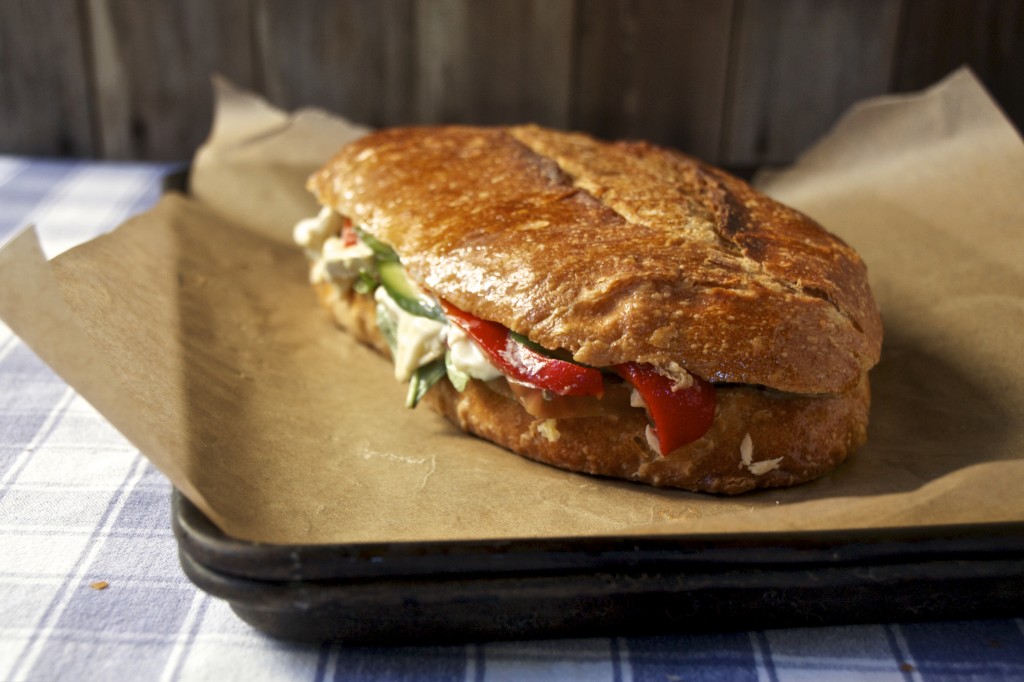 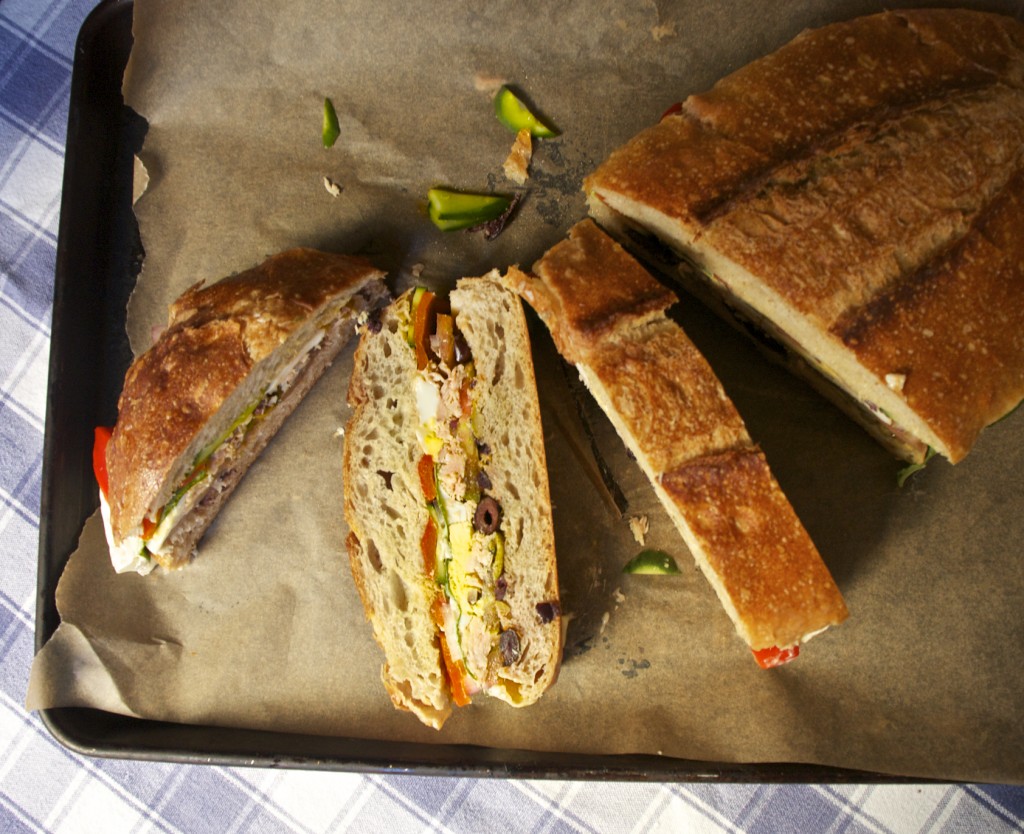 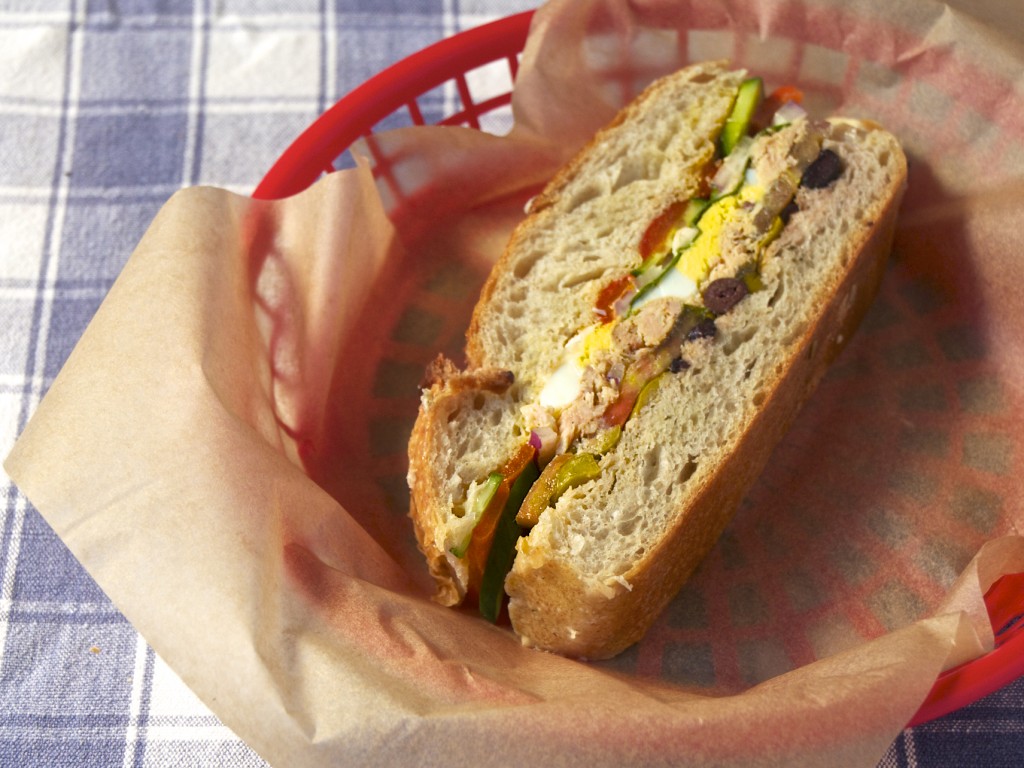 More Pan Bagnat from around the web

Pan Bagnat from Taste of Beruit

Pan Bagnat from Lavender and Lovage

Pane Bagnato for a Picnic from The Art of Food 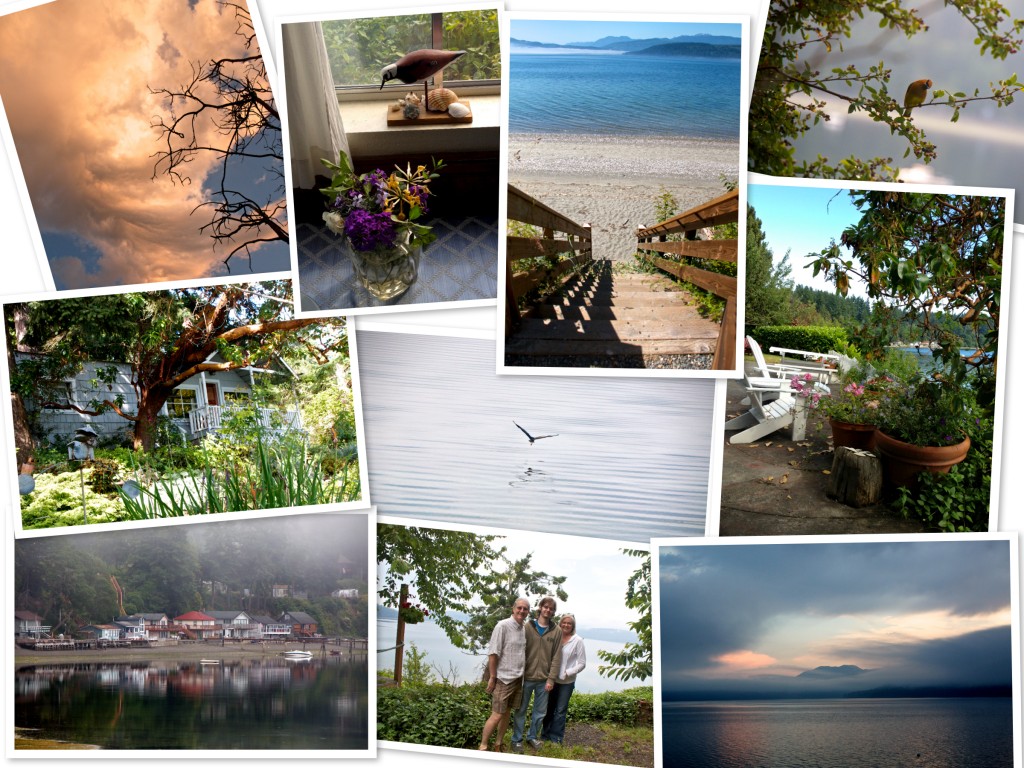