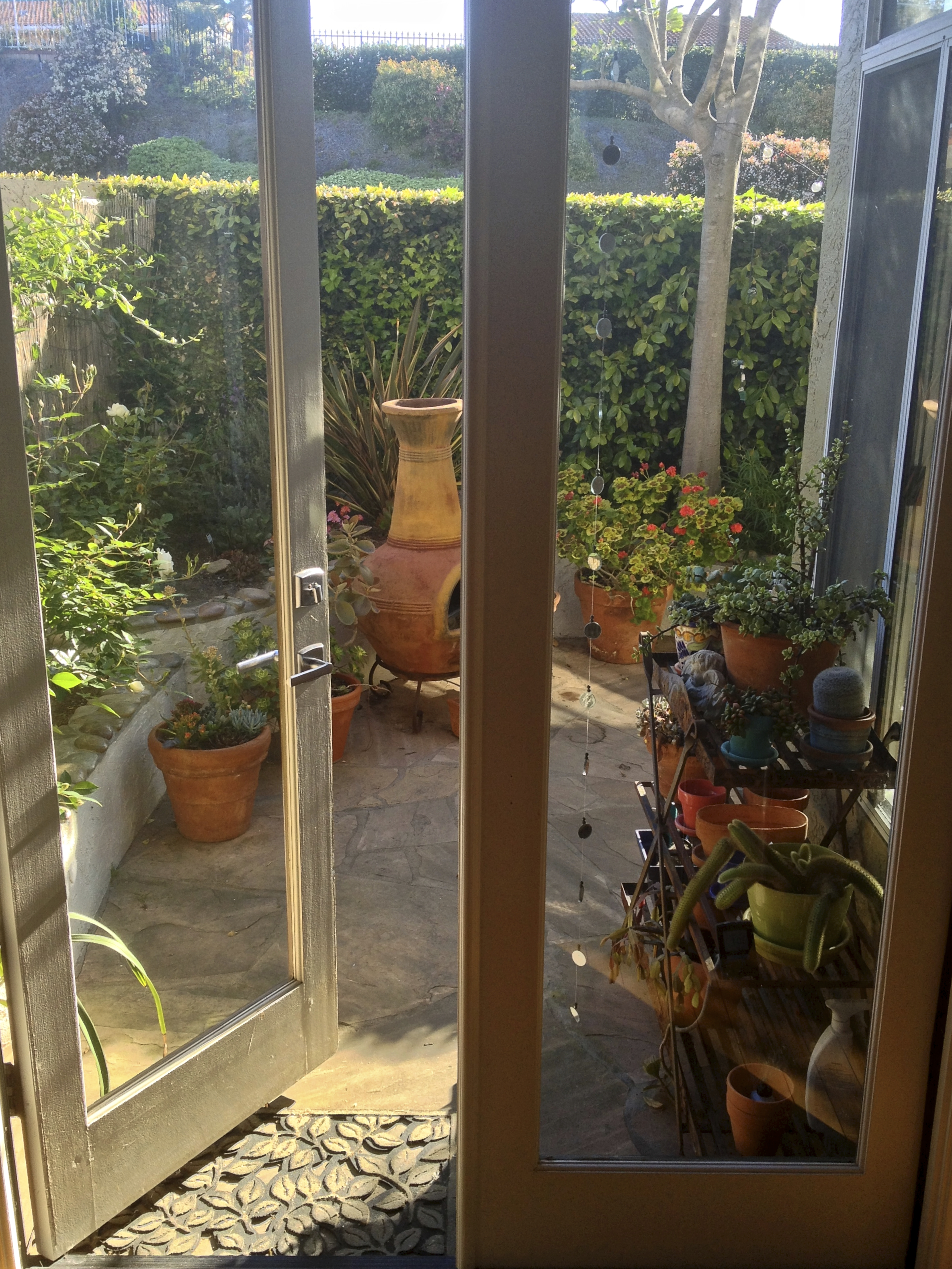 Welcome to our patio garden!

More years ago than I’d like to admit, we began to work on the patio that wraps along the back and one long side of our house.  Our front yard is the size of a postage stamp that the association’s landscapers tend,  so the patio is where I garden — as in plant whatever I’d like to grow in the space we have.  What we lack in planters and a couple of bordered beds I make up for with pots.  I’m a big fan of planting in pots, so think I’ve made the best of this outdoor space.  When we moved in, the patio sported the remnants of a Japanese themed garden complete with a dark, two tiered fountain topped with a geisha of all things.  Azaleas and camellias bloomed in spite of their scraggly appearance, and a Japanese maple filled one of the triangular corner planters.  Jasmine and honeysuckle had formed a tall thatch over one fence, and although lovely when in bloom, was quite a mess otherwise.  When one lives in the most southern corner of the U.S., I wonder about gardens created with plants not suited to a desert environment — one often strapped for water.  Aesthetically, it just didn’t seem to match the south of the border inspired architecture of our house.  Change was inevitable because I wanted to make the most of the space.  I needed a place to lose myself in the simple pleasure that gardening provides as well as a space to eat outside as much as possible, whether with guests, or on our own. 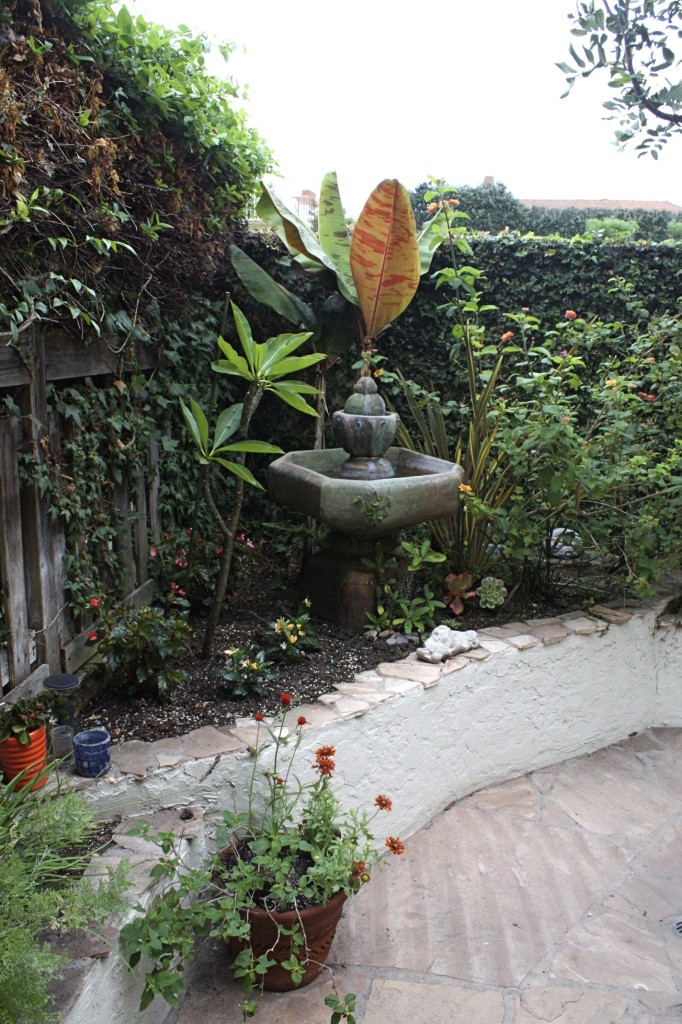 Not quite the beginning — we replaced the geisha fountain originally there.

By the time we finally decided to give the patio an overhaul, I’d been adding things here and there the first five years without any kind of a plan and as much as I don’t mind a busy, lush look, realized I had to make big changes.  None of the plants were thriving.  We got a bid on a fence replacement for each side, replacement of the planter cap which had begun to crumble and loosen, and replanting of everything to include indigenous and drought resistant plants.  After cringing at the price tag of $6,600, I did what I usually do — procrastinate, then think about tackling it myself.

I was able to get help from my husband and son from time to time so that helped quite a bit, but it’s been a very slow process and we’re still not finished — in fact we may never be.   I go back and forth on whether to replace the fence which would be more an aesthetic than functional change, unless privacy is considered.  Neither of our neighbors venture out onto their patios, but one has a gardener that comes once every other month, and the other, someone who takes a broom to the leaves that have gathered after six months.  So perhaps, the fence would also keep me from having to look at their respective patios while I’m outside trimming, raking, watering, transplanting, and day dreaming about a larger yard. 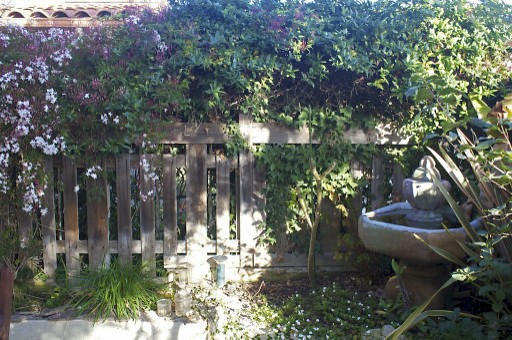 The honeysuckle & jasmine thatch over the fence was fragrant, but an unruly mess.

When we moved here nearly 11 years ago, we did so for many reasons.  One of the most important was the lack of a big space to take care of.  We’d come from a home that had a half acre of terraced land which was fully planted with fruit trees, perennials, herbs, and a small vegetable garden.  It was beautiful in its prime, but a change in responsibilities at work made it very difficult to keep up with and it was a true relief to move somewhere that didn’t need constant care. 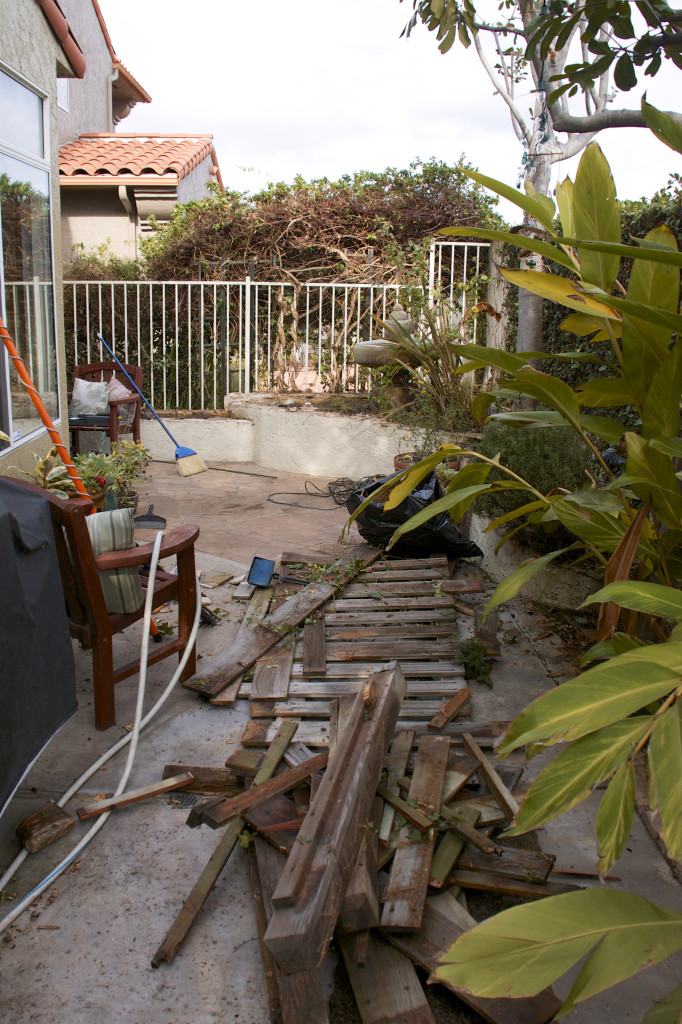 Remnants of the old fence.  You can see the plants had grown around the metal fence in the background.

But that was then.  I miss having more space — at least enough for a true vegetable garden.  Although I have always considered myself a good gardener thanks to my mother who has magic green thumbs — no, make that hands — I have had little experience with a vegetable garden and at this point in life would enjoy having one.  I day dream about that happening one day in the not too distant future while enjoying the small slice of paradise on the patio we currently have. 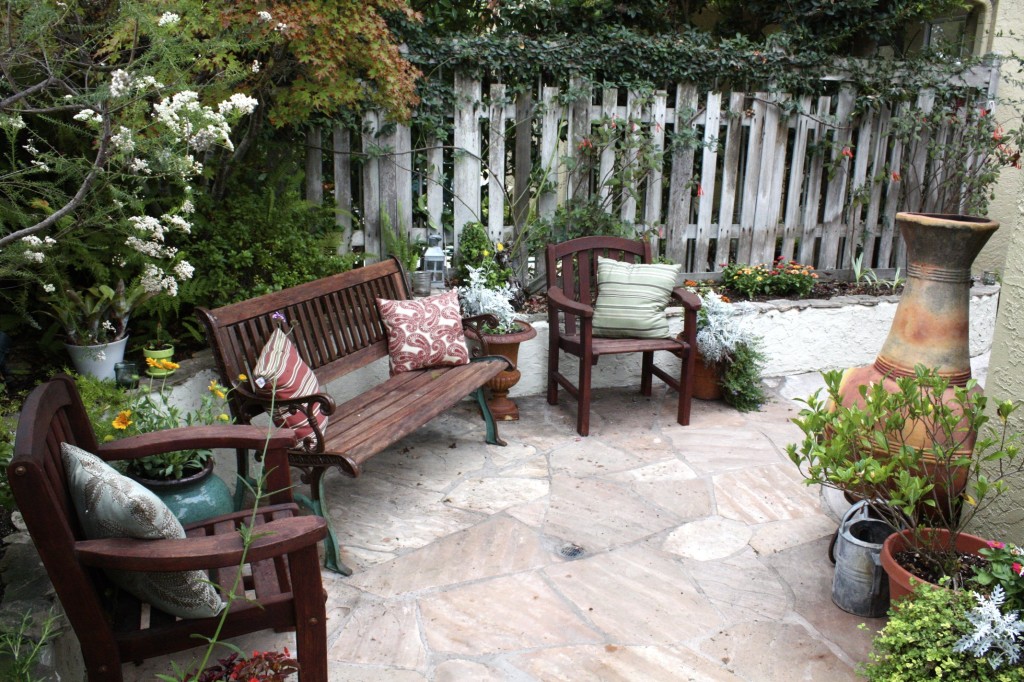 This is the best it was before we tore everything out.  The tree was dying, the fence rotten, and the planters root bound.

What have we done so far?

We started by tearing down the old, rotten, termite infested wooden fence and covered it with a not so temporary fence.  Sort of.   It doesn’t quite cover the distance on one side.  Yes, I have another roll in the garage, but have i put it up?  No.  We removed nearly all of the plants and replaced them primarily with Iceberg floribunda roses which I felt would have the best chance of handling life in the planters as well as the sunny/shady area.  I have also added more succulents because they’re relatively low maintenance and enjoyable to watch bloom.  The biggest job was to chip off the old flagstone cap on the planters and replace it with river rock and skip stone.  I’ve lost track of how long that took, but I did quite a bit of the work myself.  I gave the planters a fresh coat of paint to brighten things up after that job was finished.  The four scrawny carrot wood trees in the back got a good trim to help them fill out and one neighbor’s out of control cherry brush “hedge” a slashing to help me keep up with it was also taken care of. 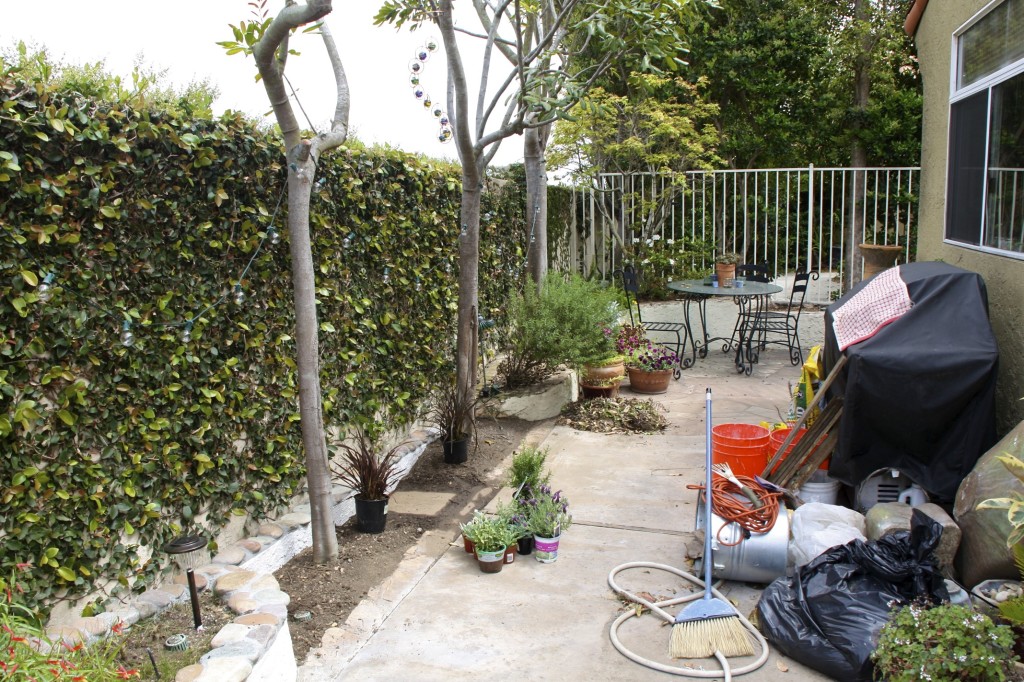 Digging the roots from the planters took far longer than we thought it would, so that was a deterrent to getting on with finishing the cappers. 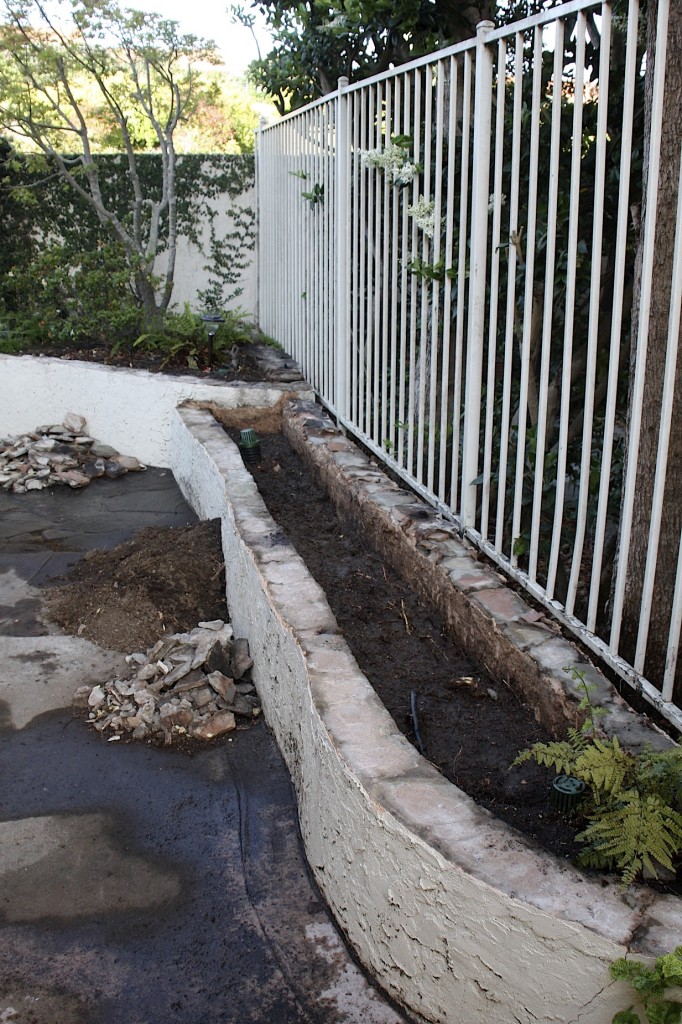 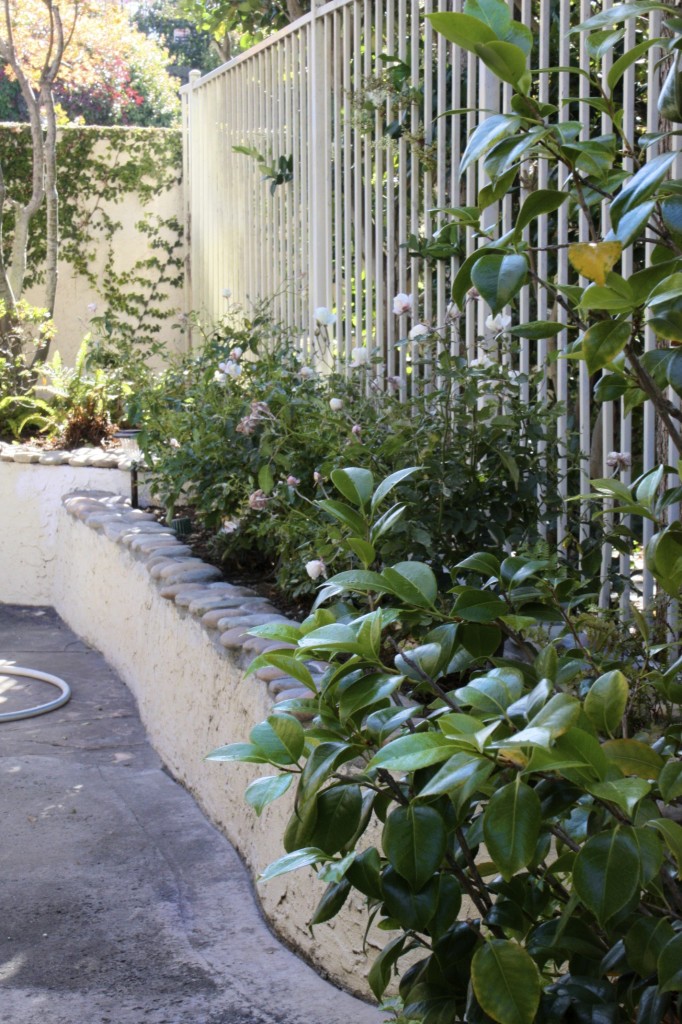 After one year, the Japanese maple is still there, but soon to go, and the roses are doing okay.  Still haven’t painted the planters. 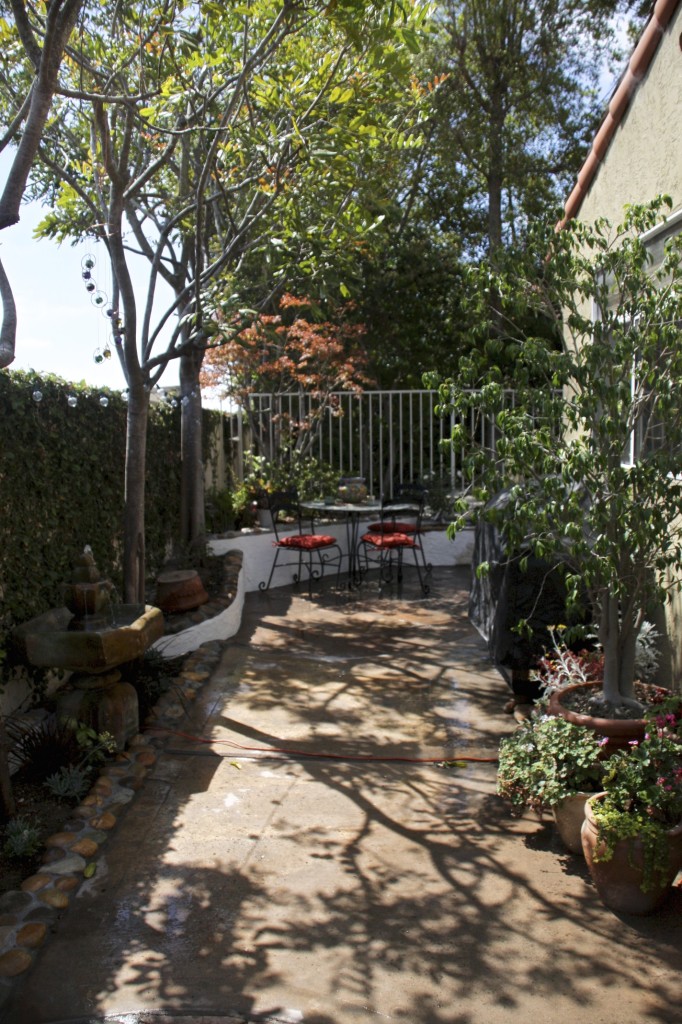 The Japanese maple is still alive and things are back in order, but we needed a larger table so the little bistro set is gone.

One of the changes we didn’t quite plan for but enjoy is allowing the creeping fig to cover the back wall and once it did, allow it some freedom.  Instead of it staying small and tightly attached to the wall, it has thickened and draping vines softly fall away.  I love the texture and the rusty color new growth shows off, the leaves glossy on one side, and velvety on the other.  I’m not sure where the plant grew from because my neighbors don’t have it on their walls, but I’m glad it grows on ours.  And finally, we replaced the remnants of our 15+ year old patio set sporting bright new coats of paint.  Someone on Craigslist was only too happy to take them off our hands for nothing along with the quarts of paint I used to paint them.  Now we have a lovely teak bench I’ve wanted forever, and a narrow table suited to our space.  When we eat outside (not as often as I’d like) and people are over, we drag the bench over to the table and add a couple of folding chairs to seat up to eight. 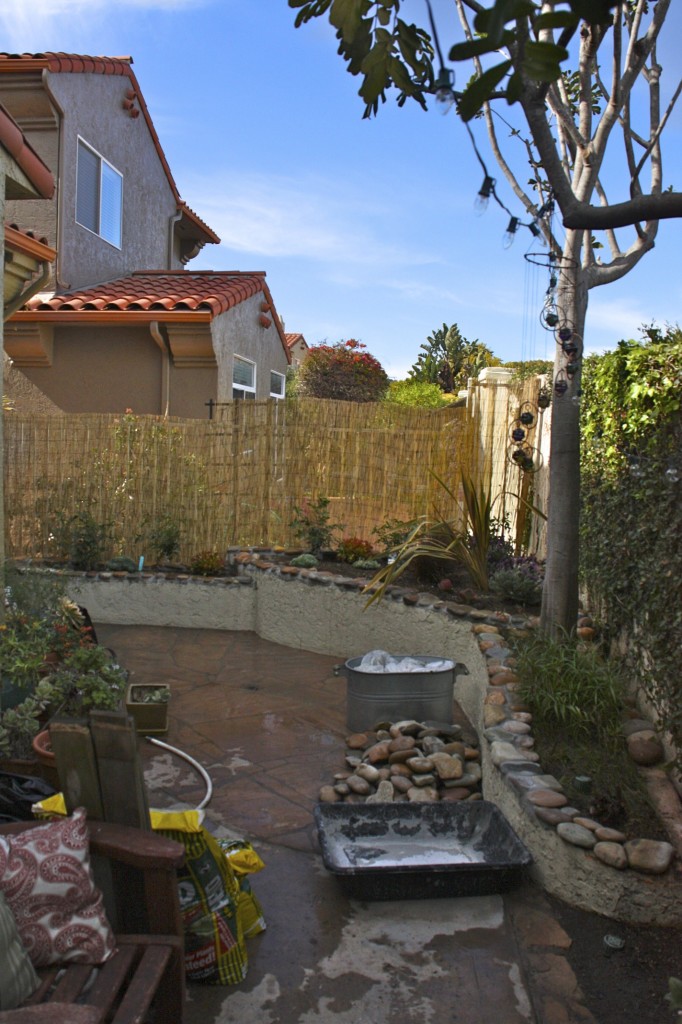 Having the vines cut from the fence has really opened things up.  I love cooking at the counter and looking over the fence now. 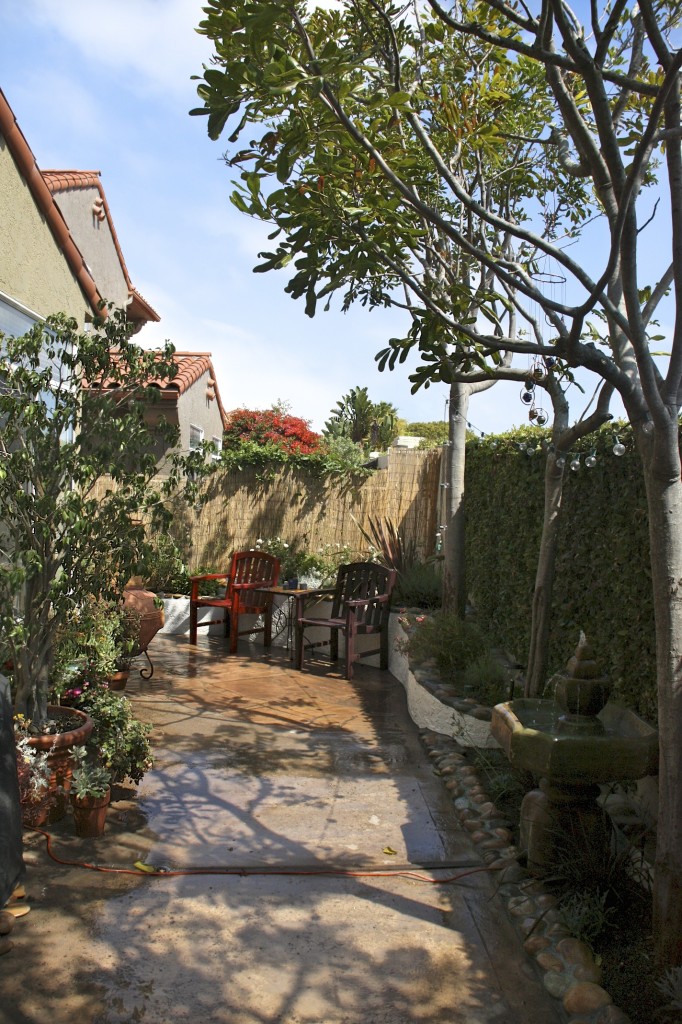 We painted the old chairs, but the paint was all that was holding them together after more than 15 years.  They had to be replaced. 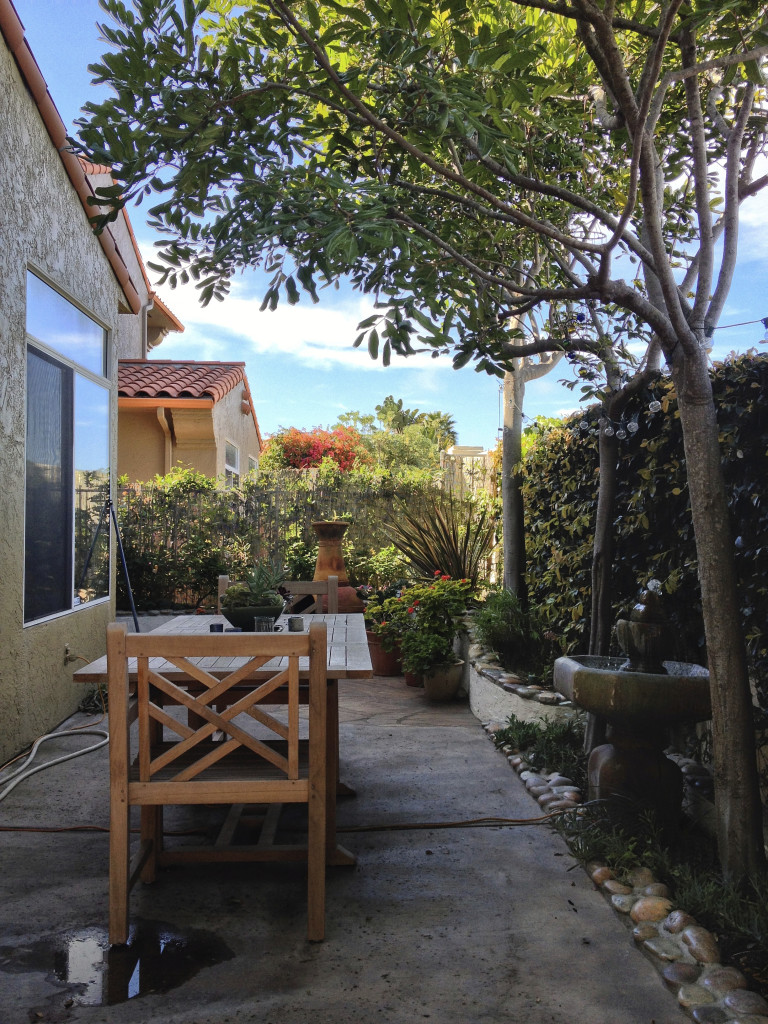 We finally got a table and chairs, moved the chiminea and have adjusted to this phase. 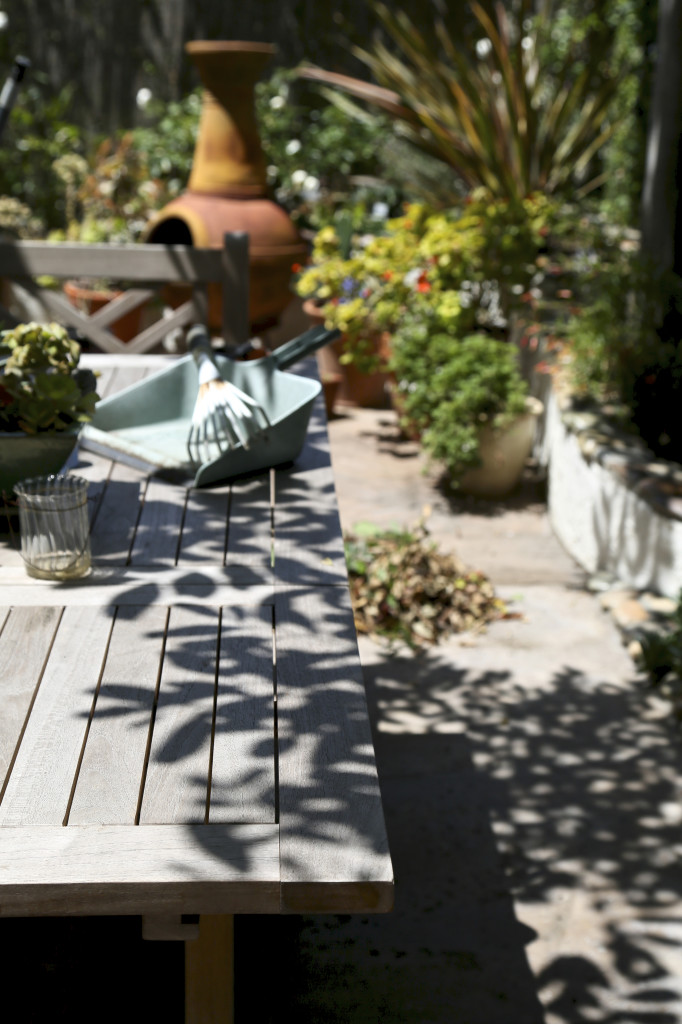 Low maintenance at this point, a little raking, watering, and sweeping keeps me entertained. 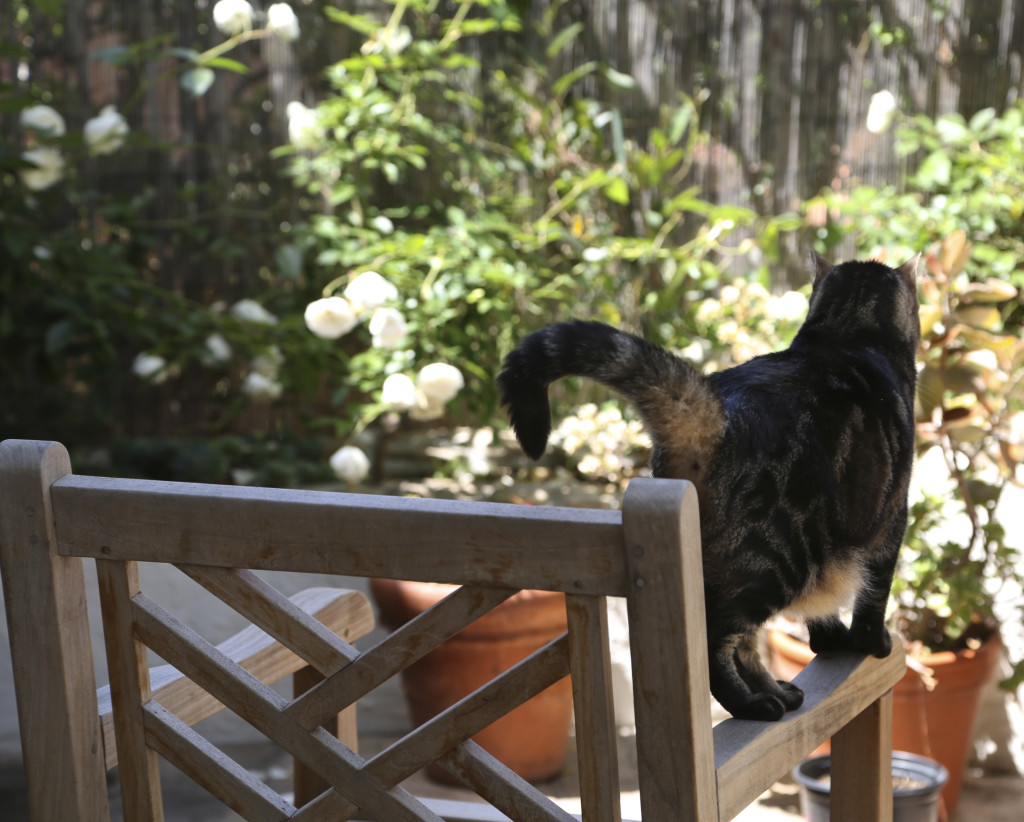 Lizzie loves it when I’m out there and stays close by hoping I’ll pick a sweet piece of grass for her to chew on.

What remains to be done?

We cut all the underground sprinklers which sprayed the wall and patio flagstones more than the plants, so I need to install drip lines that will help save water, allow the plants to grow deep roots and with a timer, keep things watered when we’re traveling.  Although we purchase those inexpensive sun charged lights, they put off so little light they’re not functional when it’s truly dark and someone is out grilling.  The string of lights works best, but there isn’t a plug to prevent having to run an extension cord so we need an outlet installed.  “Call an electrician” has been on my To Do list for a very long time.  The little fountain that helps drown out the traffic on the other side of the wall at busy times of the day also needs hard wiring.  Some outdoor space heaters would also come in handy.  As much as the weather here is to our liking, most who visit think it’s chilly in the evenings.  Plus, the hubster and I would be able to enjoy a winter evening outside with one of those contraptions, if I am lucky enough to get him to go out there with me. 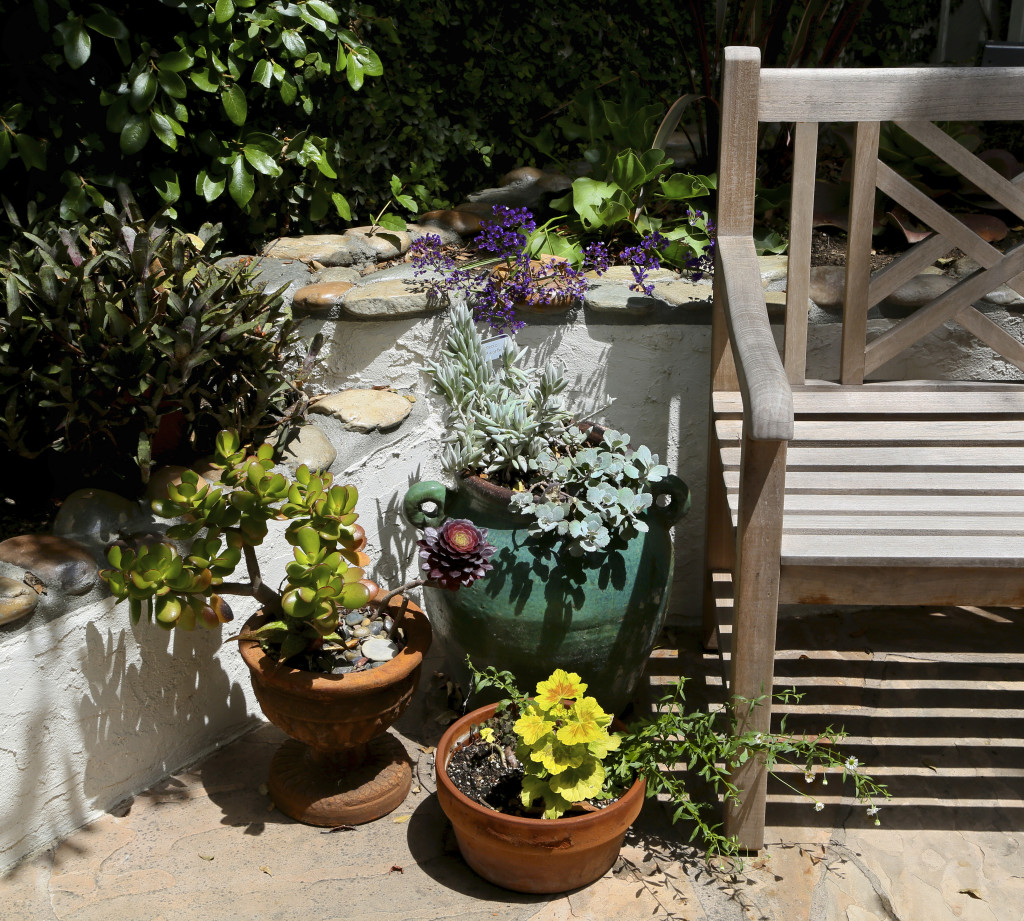 This side of the patio is either completely shady or completely sunny.  It’s a challenge to find plants that tolerate this so I move pots around depending on the season. 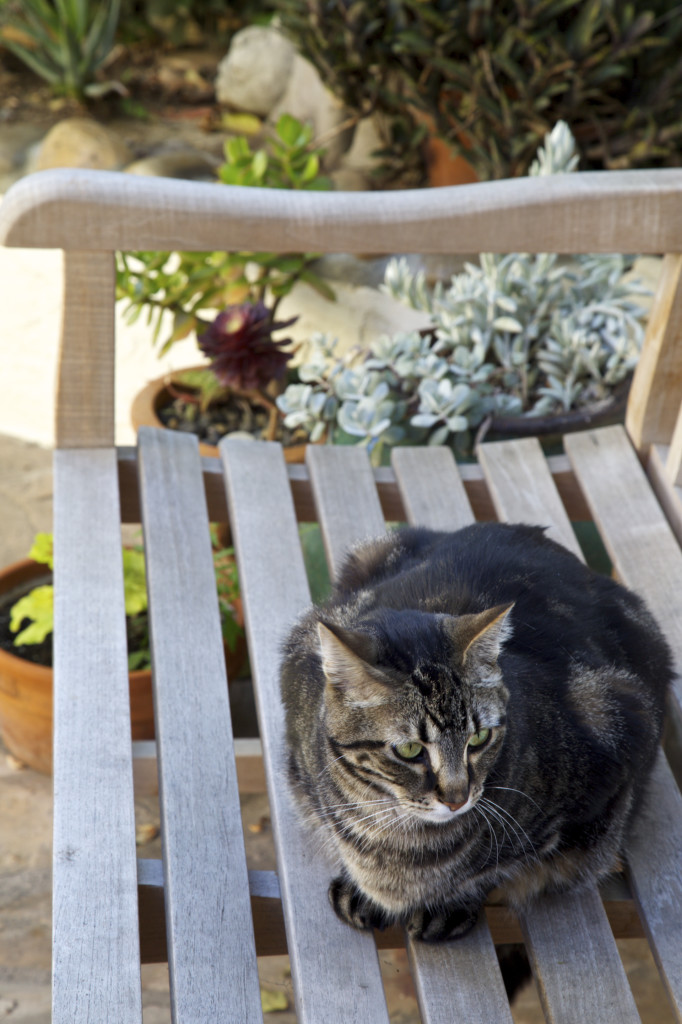 Will we get that wooden fence I mentioned earlier?

We should because I’ve noticed I’m getting used to the temporary one being there in all its half done weathered glory.   I did finally see something while out on a walk one day — a wooden gate.  I liked its pattern, so we’ve measured and calculated and designed something that would help finish the way our patio looks, but we’re not in a hurry and may change our minds all together.  I worry about whether it will look as wonderful as I think it might, and so I stall.  I’ve asked my sons to help me make it, and thought about hiring a handyman instead, but I can’t make a decision.  I’ve planted a few climbing plants in the planters on each side and am playing around with the idea of just letting them grow over the wrought iron fence the development requires we keep since the neighbors aren’t interested.  Decisions, decisions. 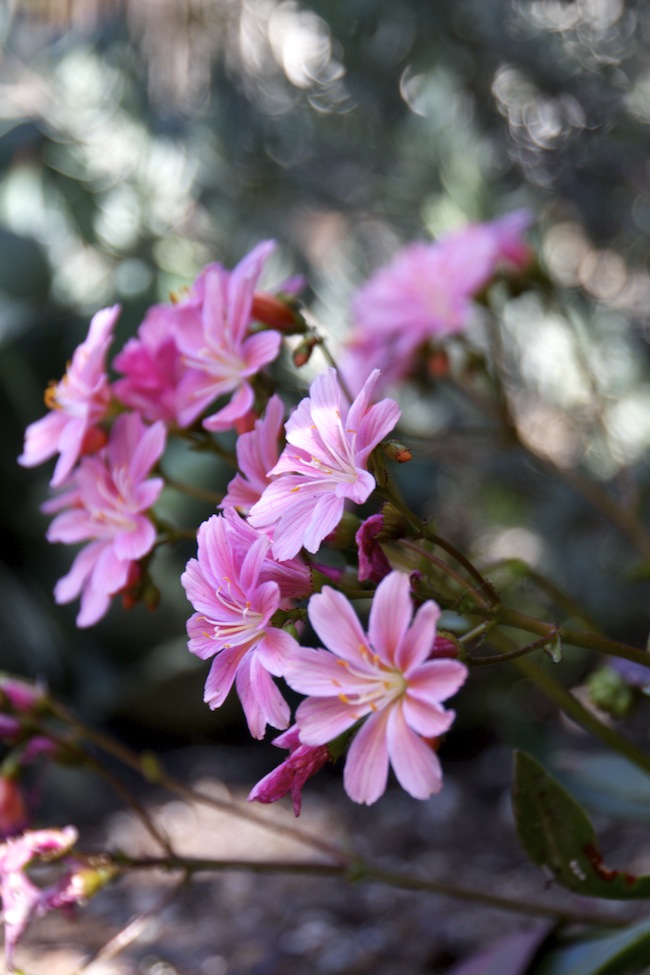 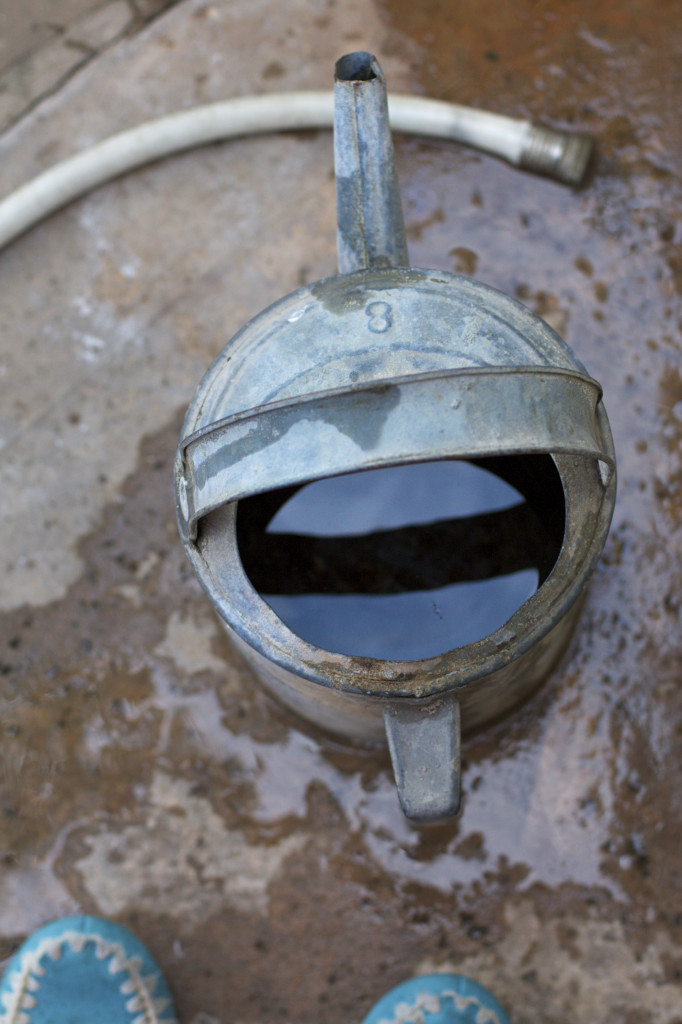 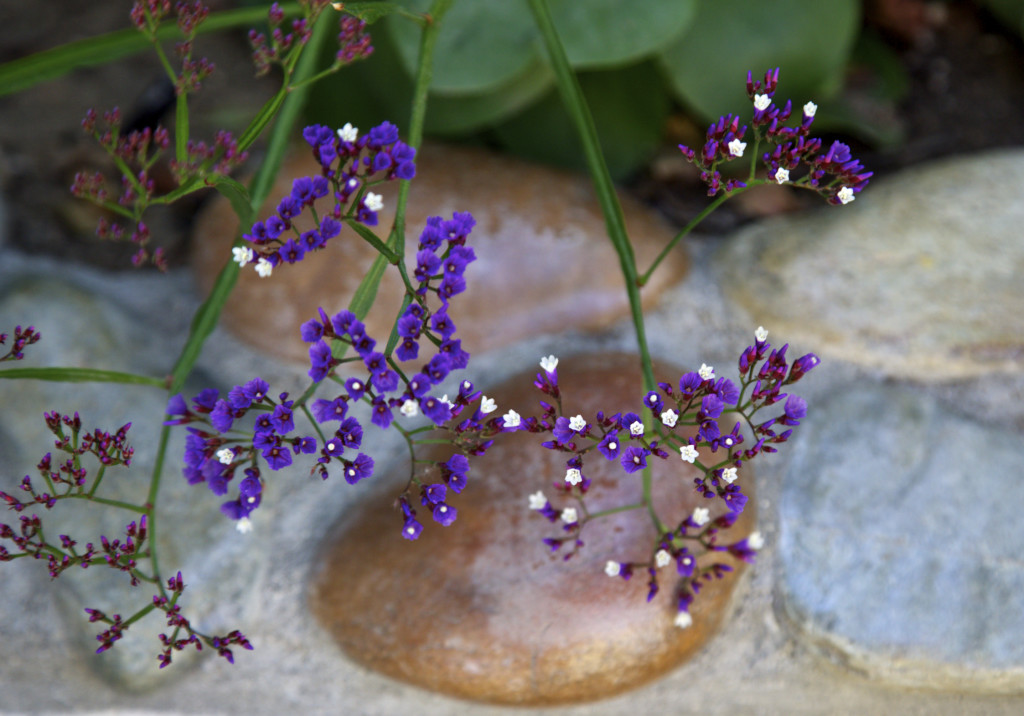 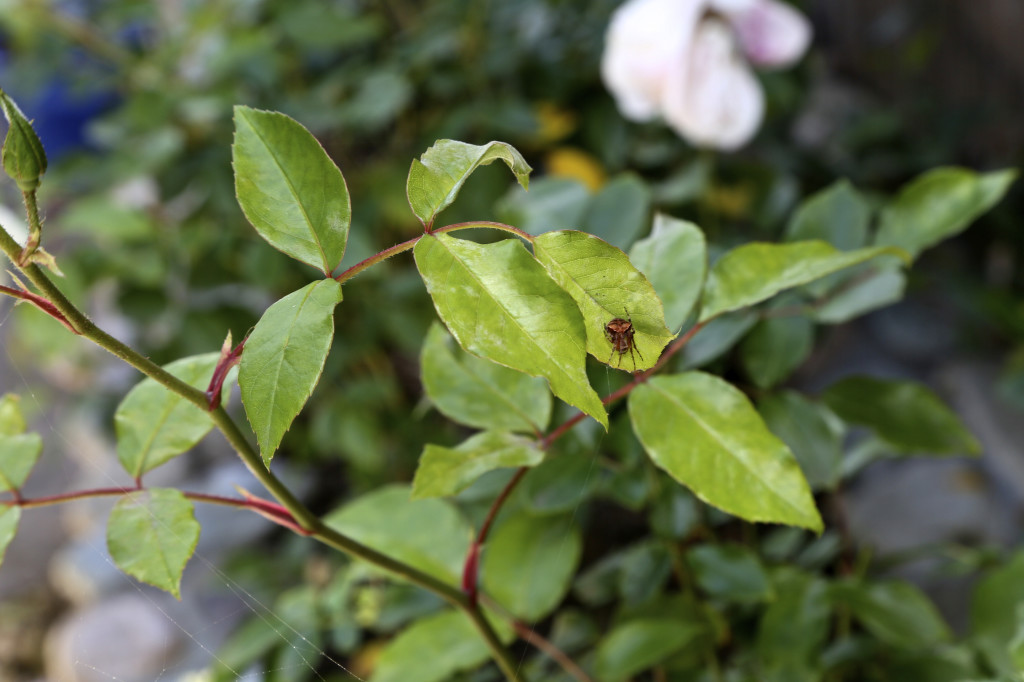 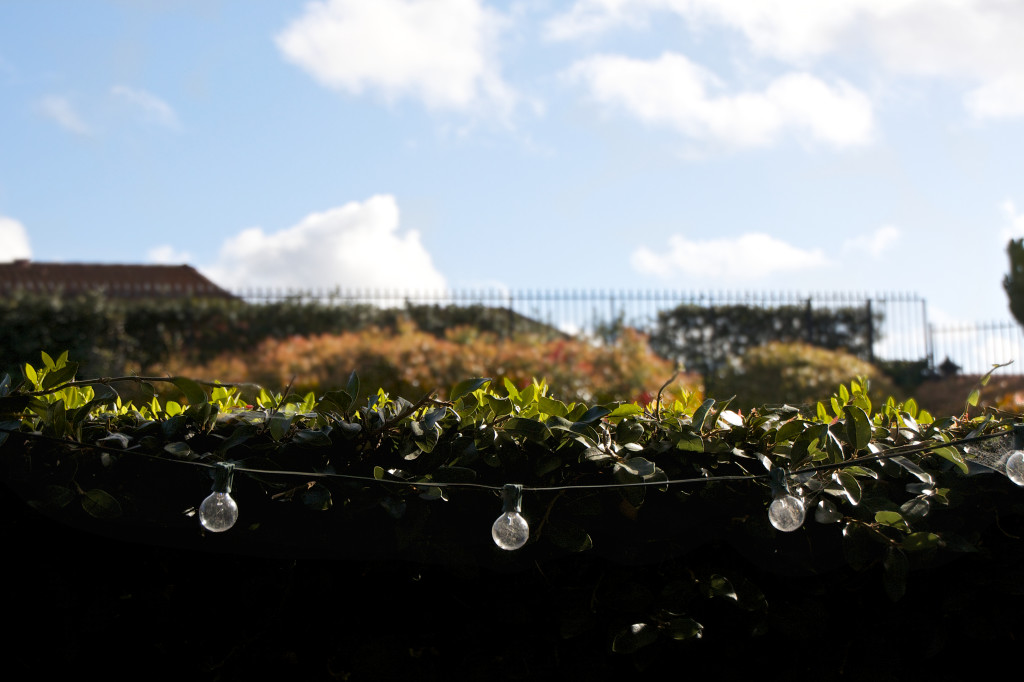 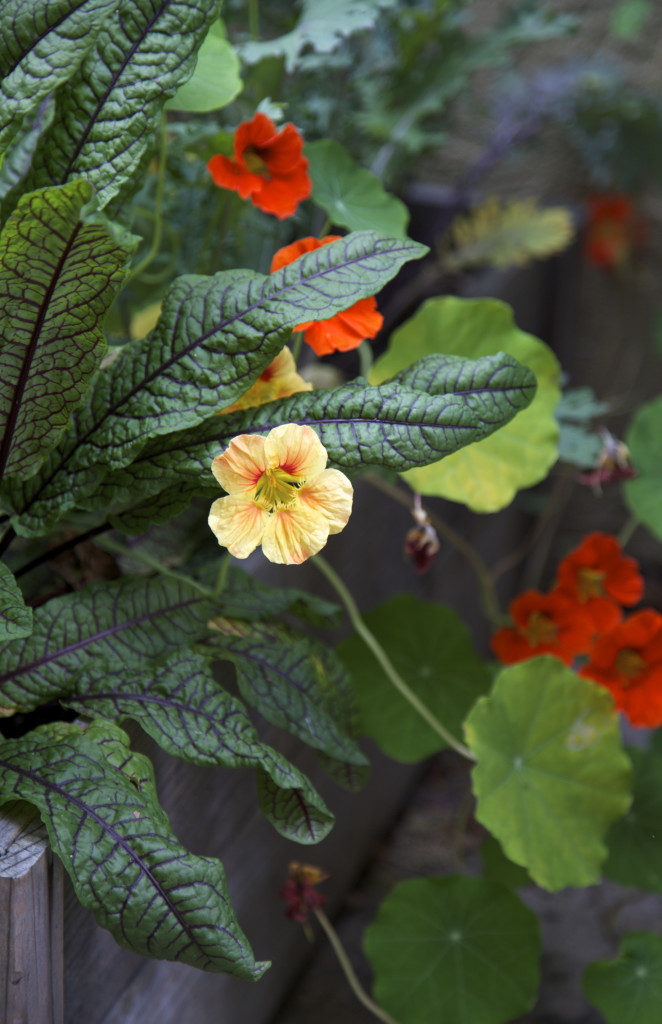 Volunteer nasturtiums in my herb box with a perennial bloody sorrel plant.  The worms killed off my lovely wild arugula plant last year. 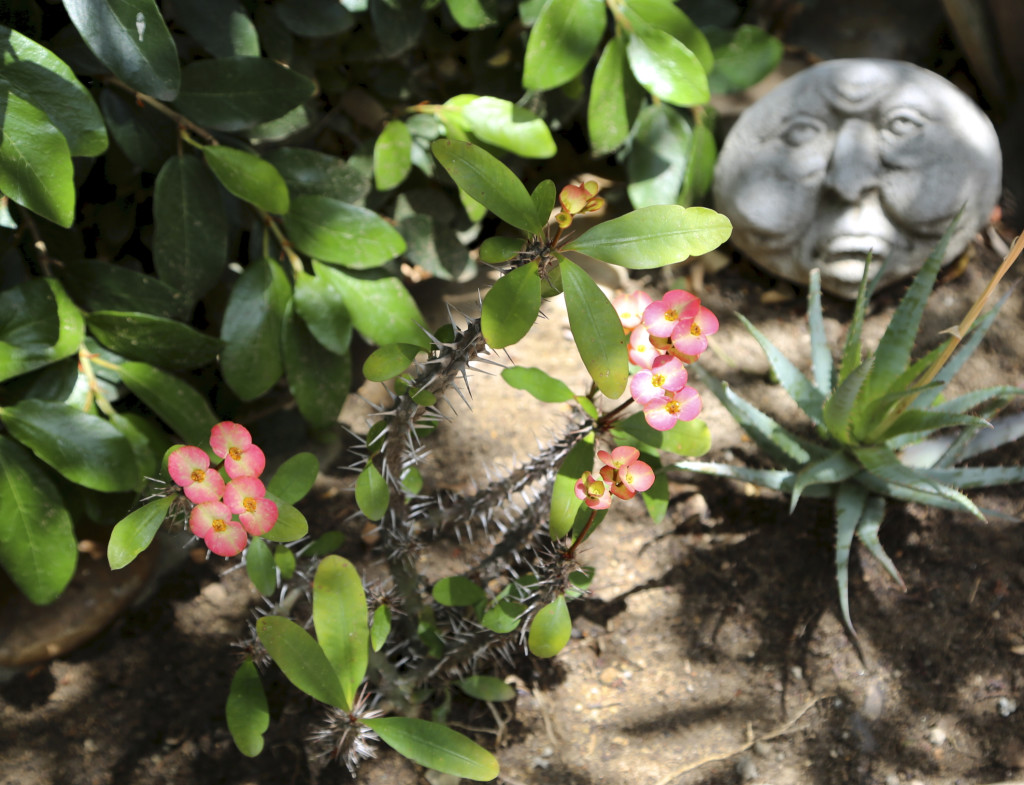 This crown of thorns is a sturdy thing — it survived in the clump of dirt we dug it up with for a year waiting for transplanting in this space. 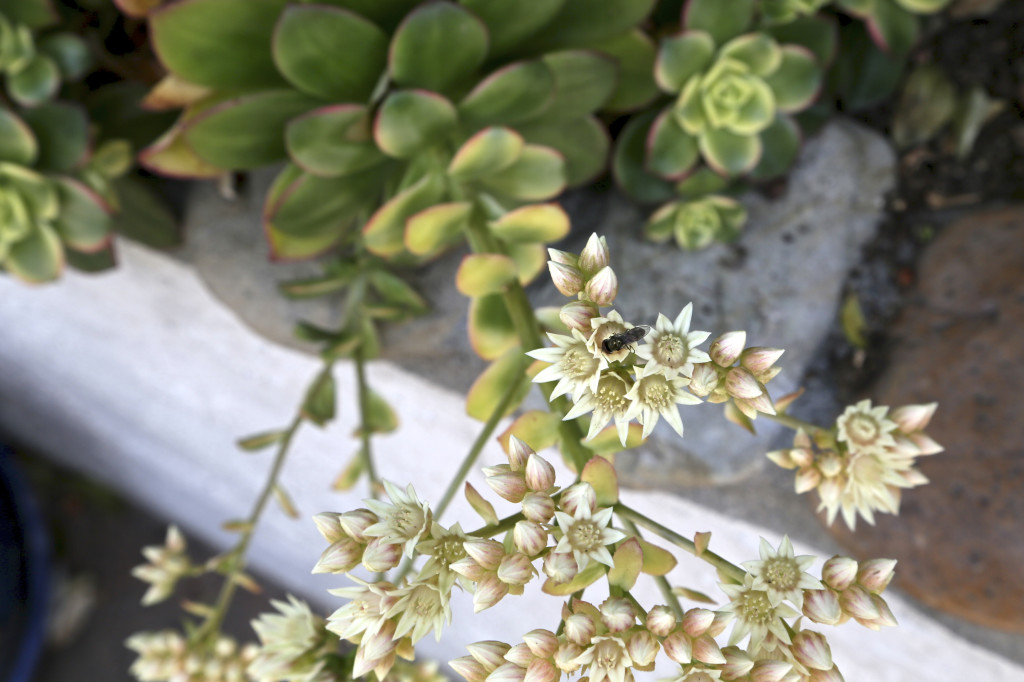 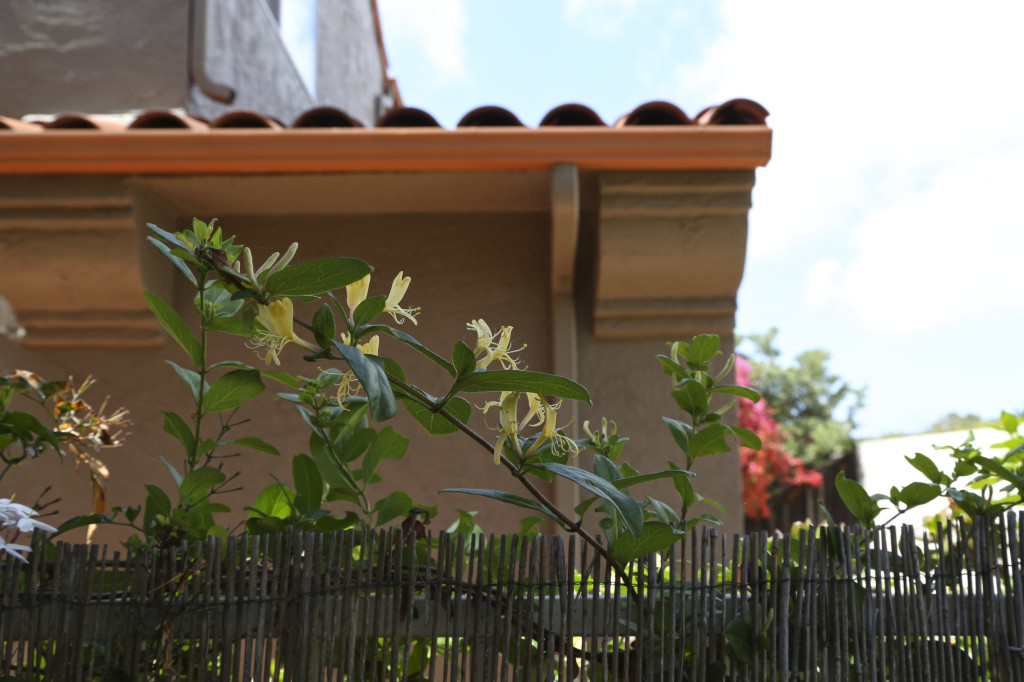 Whether we put up a permanent fence or not, the honeysuckle will always need attention.  It’s pretty, smells heavenly, but will take over if not tended. 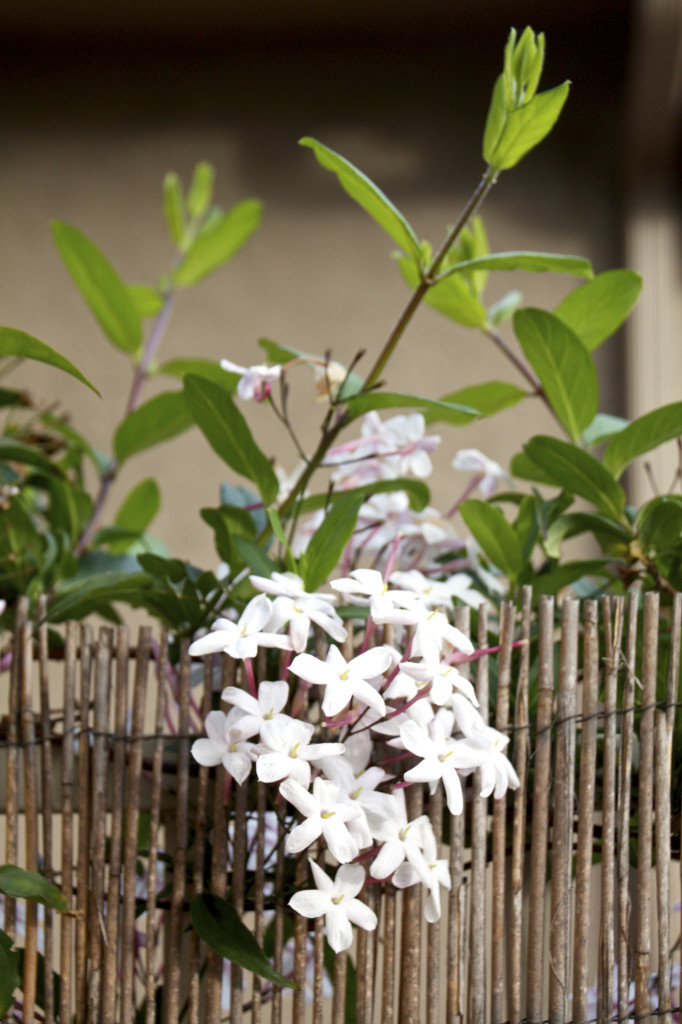 The jasmine as well. 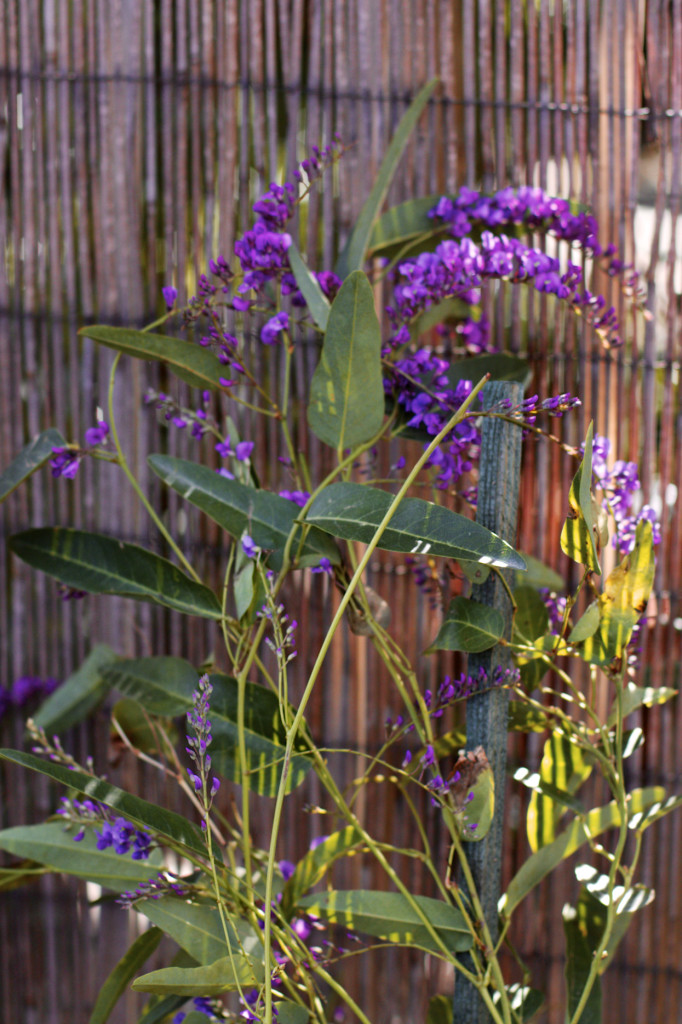 So I planted several hardenbergias on each side of the patio thinking, if I can’t fight ’em, join ’em.

In the mean time, I thought it was high time that I shared the space my cats love to spend time with me when I’m out there.

What do you think?  Should we just go with the iron fence and let the vines cover it (tear down the straw fence before it rots) or should be go ahead and have the wooden one we’ve planned built?

Would you miss having a yard if this is the space you had to enjoy, or would you be content with it?  I have lots of time to think about it before we move — and yes, a move is in the works.

As always, thanks for stopping by. 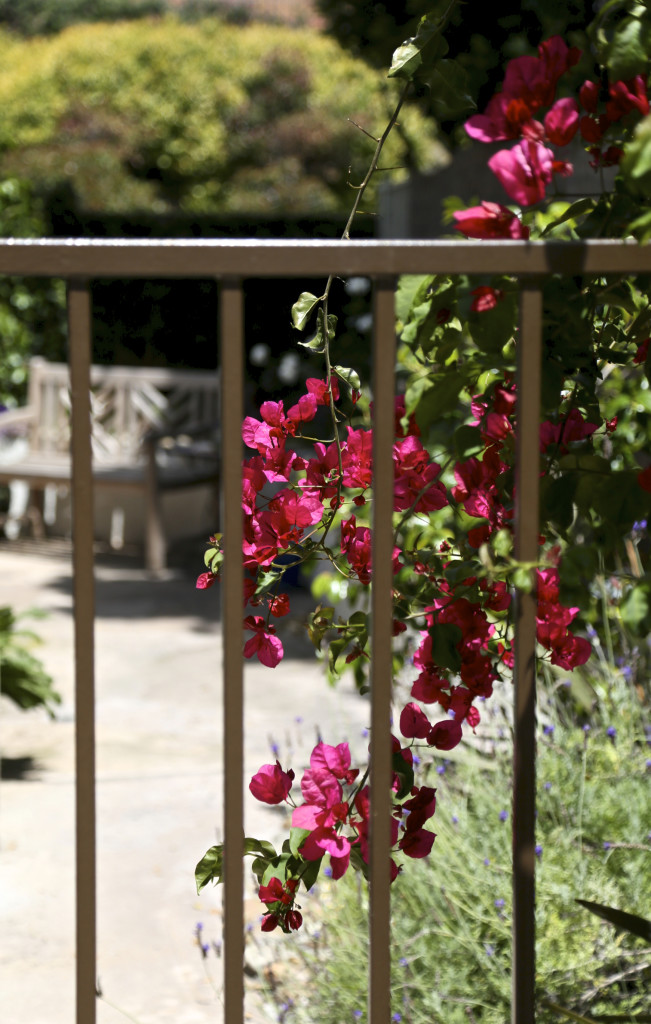 Congrats to you if you made it through this gargantuan post!  It’s been a long time coming and there will be others.  You’ll find them in the “Living” category because life is too short to talk about food all day.  Maybe.

Cauliflower Soup with Roasted Peppers and Feta
To Paris via London Heathrow: An Epic Tale