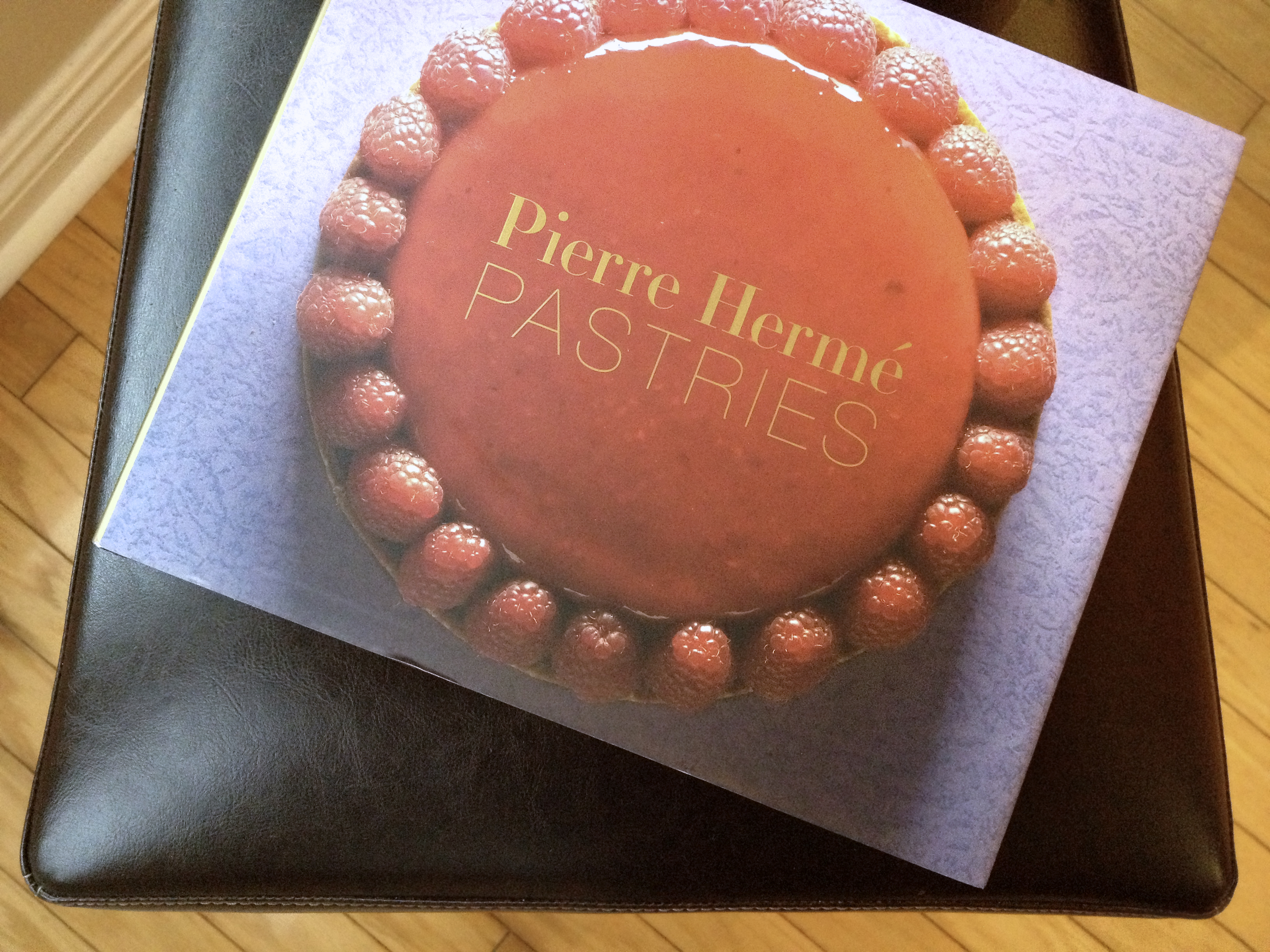 I thought I’d take a break from posting photos of our trip to Paris to give those who would rather look at food a break.  It’s only fair, I guess, after holding everyone captive with my vacation photos. But I will warn you this is still connected to Paris in a six degrees of separation sort of way.  It’s about dessert, and it’s about French dessert in particular.  French pastry from the French “Picasso of Pastry,” Pierre Hermé.  I thought my sampling of beautiful pastry in Paris was lacking so ordered his book, Pastries

as soon as we arrived home.

I thought it might make for a good project to get back into the complexities of pastry and although I have no desire to make all of the recipes, I did sit down with the book as soon as it arrived to read through it wondering where I should begin, making notes about ingredients I didn’t recognize or may not be able to locate — or locate in smaller than 25 lb. sacks.

Why do this?  Because I have never been interested in “make it in five minutes” food and it seems to be quite the fad right now for some reason.  My body certainly doesn’t need access to it, and if it did, I’d buy it at a local pastry shop.  Besides, I find it interesting to roll my sleeves up with a complicated recipe whether it’s savory or sweet.  It forces me to apply what I’ve learned by trial and error over the years, and to think about baking with the perspective of a professional.  Once I saw the beautiful cases of the boulangeries and patisseries in Paris, I knew I had to learn more than I know about making pastry.

Some may say it’s ridiculous to attempt making desserts like this, but having enjoyed my share of an exquisite slice of perfectly prepared dessert when I’ve decided to treat myself, it is reason enough to make the attempt.  One slice is enough, and it is to be savored.  Knowing the time, technique, and exceptional ingredients that go into its preparation make it even more special.

After thinking about the equipment I currently own, and the ingredients available either at the market or in my pantry, I decided I’d tackle the cover dessert, “Tango,” which Pierre Hermé created with inspiration from the classic Linzer Torte.

Before I go any farther with this, I have to confess I was also making a salad from Thomas Keller’s French Laundry cookbook the same day — a salad which involved making chive oil, and tomato powder of all things.  You can make a powder out of tomatoes? And one more thing — the food was going to have to travel for an hour in the car on a warm summer day.

Now you know I’m more than a bit loopy.

What is a “Tango,” exactly?  It’s a layered dessert — a tart composed of a sweet shortcrust dough made with almond meal and sesame seeds, filled with a raspberry red bell pepper compote, covered with a sweet Parmesan custard, topped with a fresh raspberry jelly, and finished with a ring of fresh raspberries.

For the Sesame Sweet Shortcrust Dough:

For the Parmesan Custard:

For the Raspberry and Red Bell Pepper Compote

For the Raspberry Puree 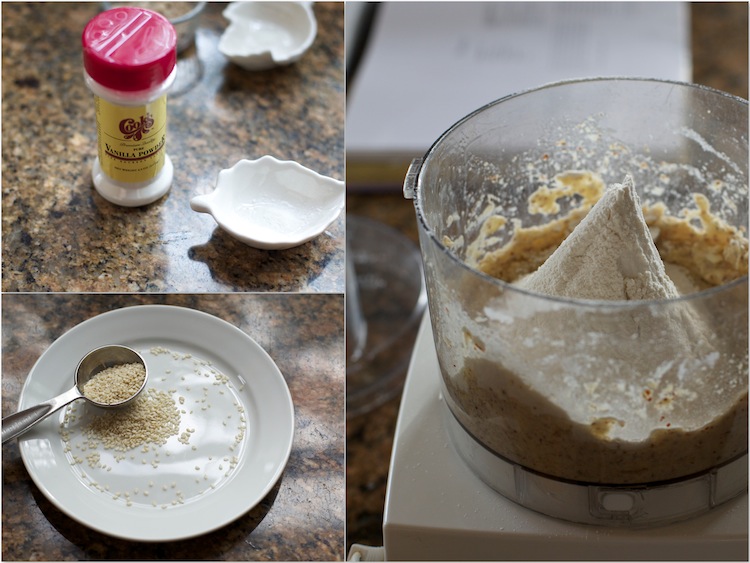 Make the pastry dough first because it always needs time to chill. 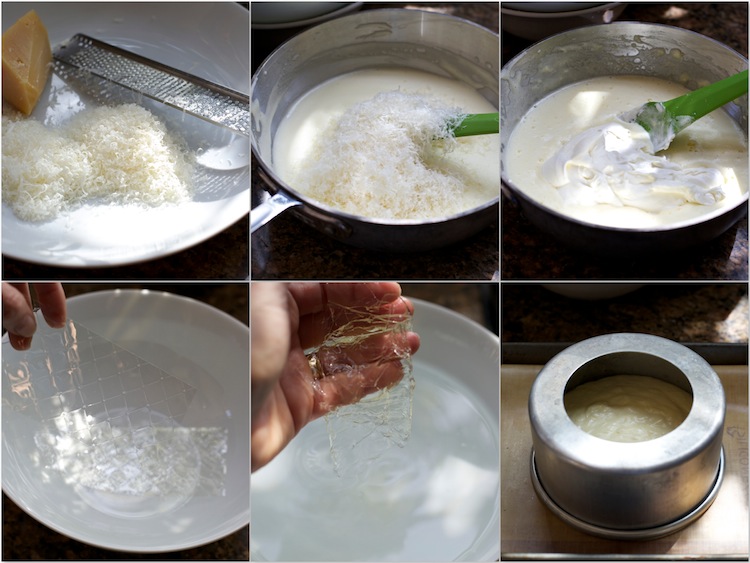 Then make the Parmesan custard.  Please know that my digital scale ran out of batteries and I couldn’t get more, so trying to figure out how to measure the quantity of grated Parmigiano-Reggiano this recipe required was a bit of a time soaker, but I figured it out.  This was my first experience using gelatin sheets.  They’re pretty interesting. They soak for about 20 minutes in cool water then squeezed to remove the excess liquid and ready to incorporate into whatever they need to go in.  Yes, I also improvised on the container for the custard.  I inverted a cake pan and set it on a silicone mat as indicated to go into the fridge.  I was more than a bit worried about whether it would seep out before it was set and it looked like it was going to, but didn’t. 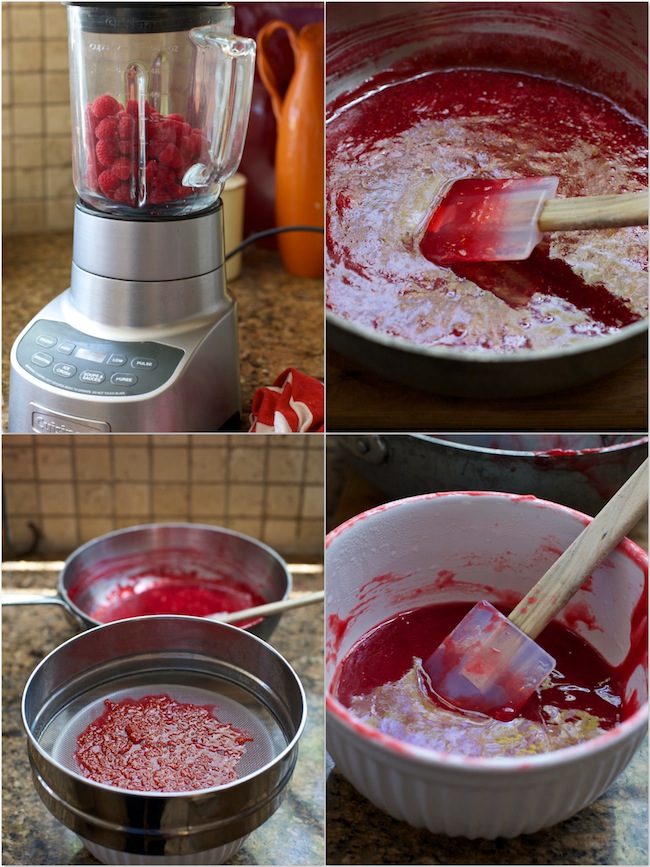 This is the raspberry jelly preparation — just fresh raspberries, superfine sugar, and lemon juice.  I decided to use the tamis to remove the seeds — it wasn’t in the directions.  I don’t mind seeds in jam, but thought I didn’t want them in this dessert.  I’m sure I would get an F for that move, but there you go.  Just look at that beautiful, glossy raspberry jelly I achieved in the end.  The flavor was incredible and I had leftovers so it went in the fridge to slather on toast with butter.

Alas, I did not remove the peelings on the red bell peppers as directed because I knew I would be running it all through a fine meshed strainer and they’d remain behind.  Exhibit A above.  Can you believe the incredible color?  As far as quantity goes, I only needed 2 tablespoons for the recipe, so clearly I garnered enough with the medium pepper I decided to use half of. 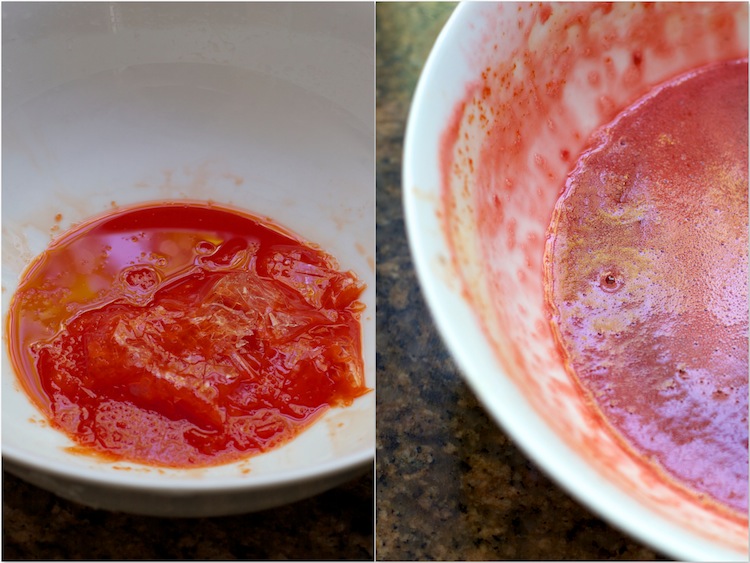 Ah, the first problem.  The red pepper puree was too cool, and of course, the softened gelatin would not dissolve, but I worked it out, setting the dish over a pan of simmering water and stirring it until all was dissolved.  Then the raspberry puree went into the mix.  If you’re wondering, yes, you can actually taste the red bell pepper even though it is such a small quantity.  I gave my husband a sample and he could tell.  The flavor of this mixture is remarkable. 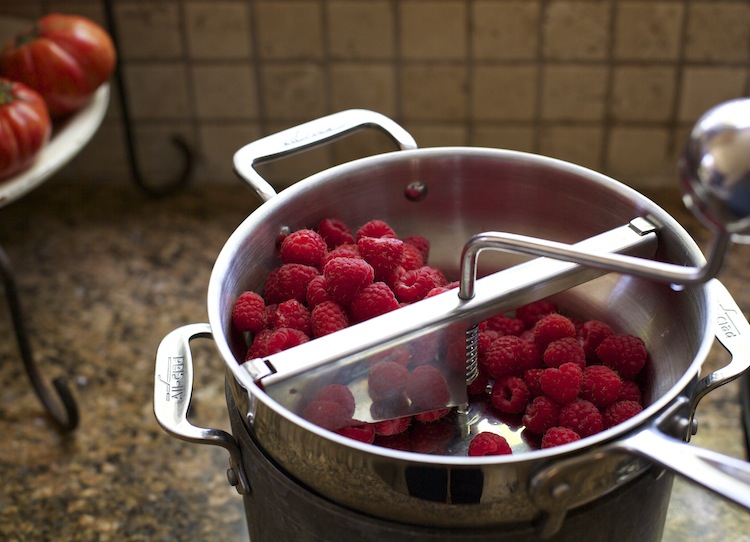 Running fresh raspberries through a food mill here and it always takes much longer than I think it will.  You have to use a sort of spin forward a couple of times, then backward and repeat until you get the job done.  But it works — and much differently than if using a blender or food processor which will rupture the seeds. 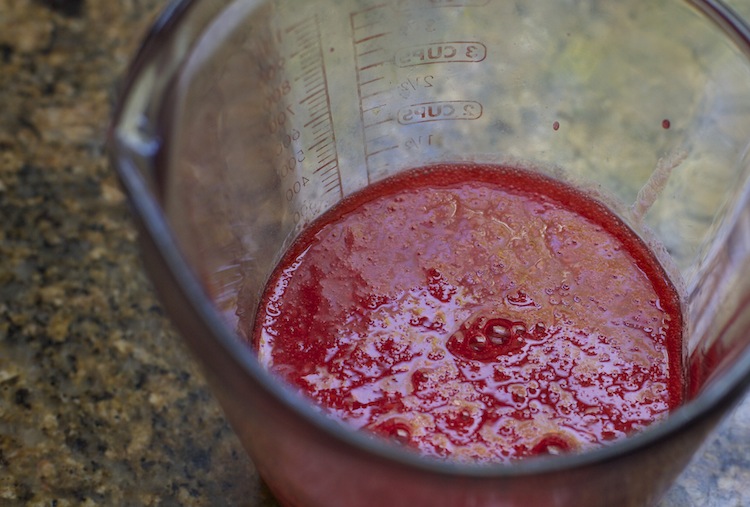 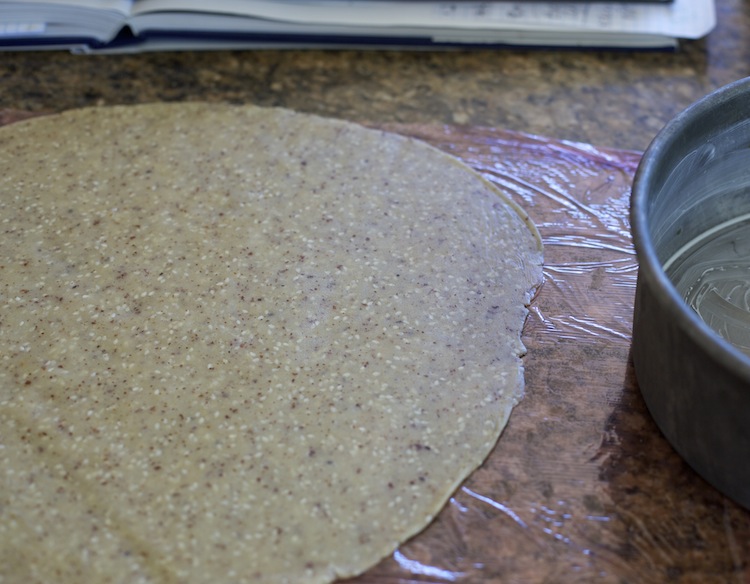 Since all the layer necessities are ready and waiting, the chilled dough is ready to be rolled out.  Isn’t it gorgeous?  The recipe doesn’t prepare very much dough, and it rolls out quite nicely.  But as always, once placed in the pan, it has to be pressed and shaped and trimmed and evened out even though it’s been chilled.  It’s a very soft dough.  You can see I used plastic wrap to roll it out on — that’s what I usually do.  I didn’t have quite the right size of pan with respect to height, so used another cake pan to bake the crust in. 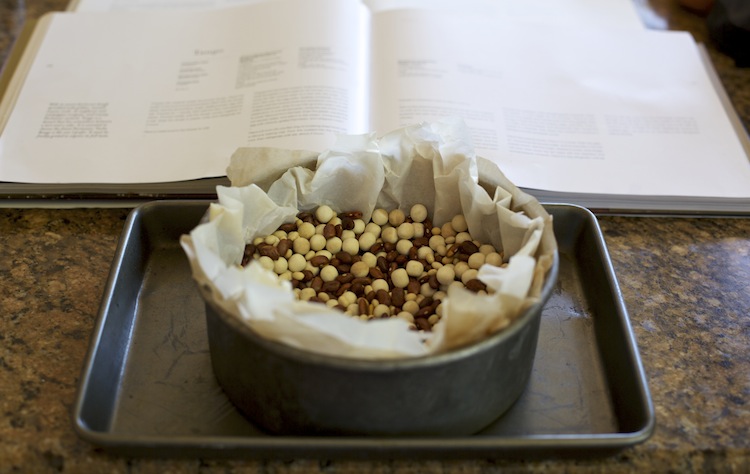 The sesame sweet shortcrust dough is in the buttered pan, lined with parchment, and filled with my usual mix of pie weights and dried beans.  I keep them in the cupboard in a bag so they’re read when I need them.  I always like to place the pan on a baking sheet just to be on the safe side. 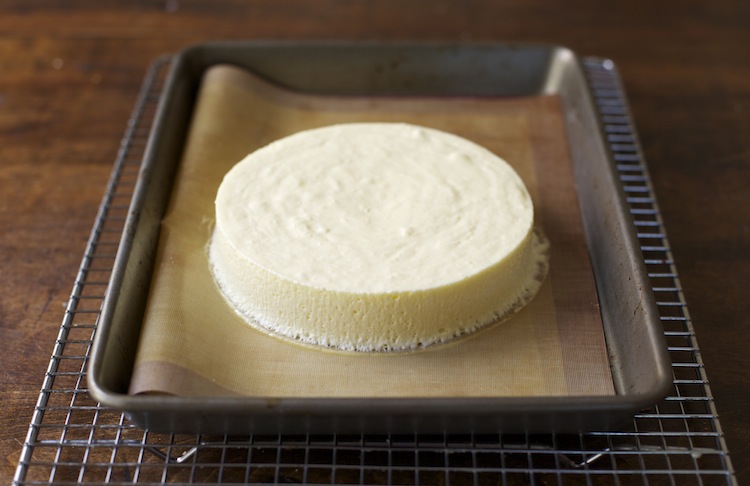 This is the Parmesan custard.  A few blasts from a hairdryer quickly released it from the pan it was chilling in.  Now.  How to get it off this pan and onto the dessert during construction.  I thought some freezer time would be necessary. 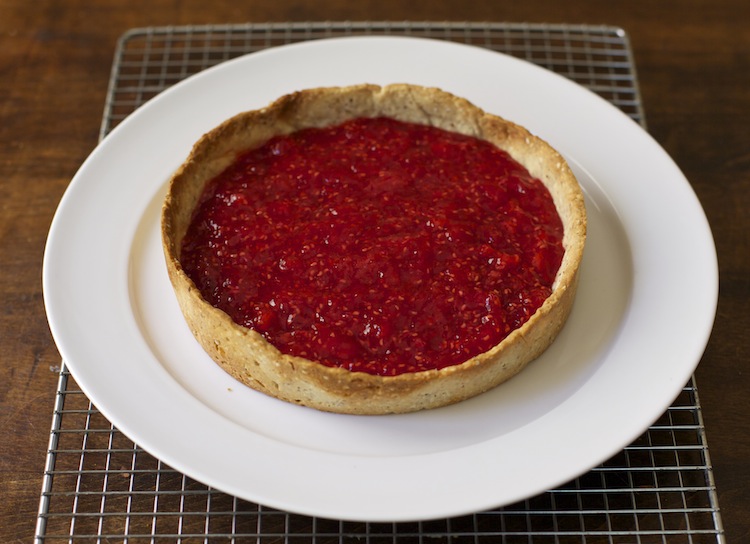 With the baked crust completely cooled, it is filled with the Raspberry and Red Pepper Compote.  Yes, I know my crust looks a bit wonky.  But it was quite the sturdy pastry crust.  I was amazed at how well it handled.  I was able to pick it up and move it around easily without worrying about it cracking. 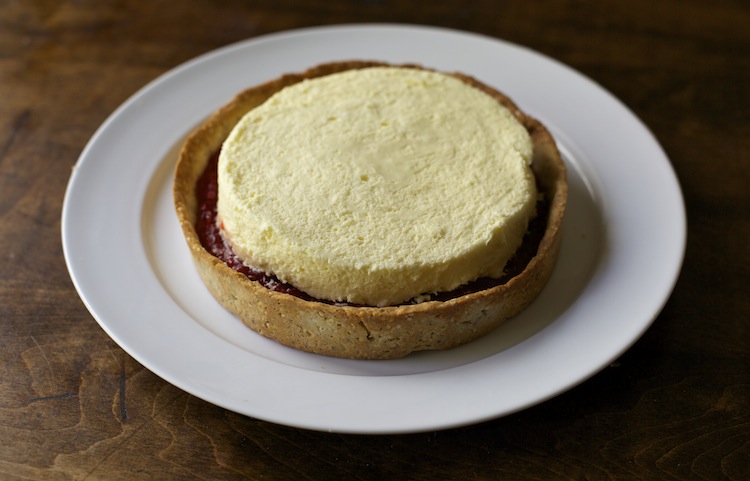 Ah, getting that custard onto that compote.  Goodness.  You can see my smudge marks on the top.  I think I used two large spatulas and there was some flipping involved.  It was a bit stressful because I worried that it would break, but I’d placed it in the freezer for a bit to firm it up and make it easier to handle.  It worked! 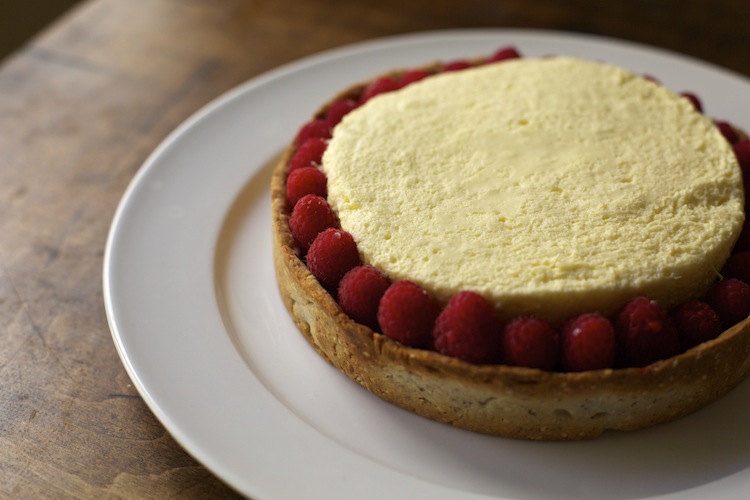 Here, I’m placing the raspberries around the Parmesan custard and thinking the whole time, I should put the raspberry jelly on first.  But no.  The directions did not indicate that I should do that.  I was compliant to a fault which is rare.  I thought about the varying size of raspberries as I did this, wondering if I would have to squeeze the last one in and plotting about whether the large ones should help disguise the undulating edge of my crust. 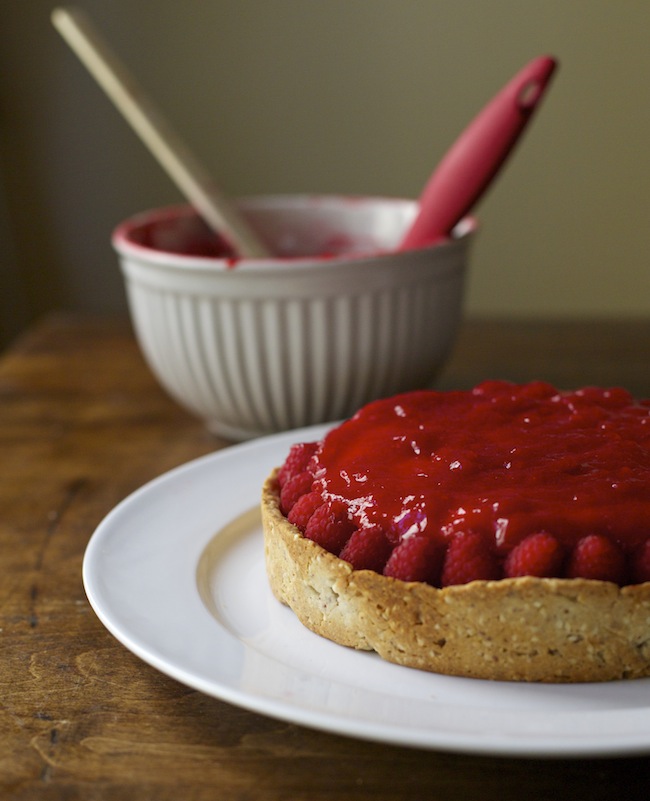 The idea of brushing the raspberry jelly over the Parmesan custard as the directions expect caused me some grief.  I expected to need to pour and spread, but I brushed.  And it sort of globbed over.  And not in a pretty way.  There was no glossy, sheer layer of raspberry wonderfulness to be had.  I was annoyed. 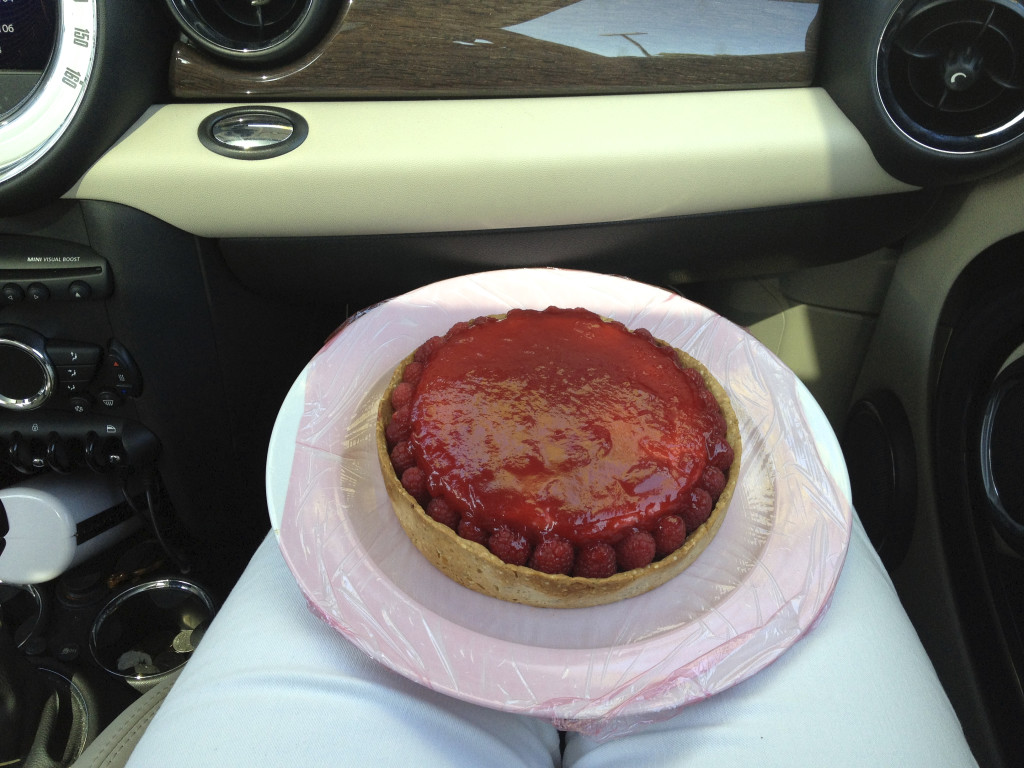 After some time in the freezer, it was time to transport and so to be safe, I placed the Tango over a plate lined with plastic wrap to keep it from sliding as we drove.  Believe it or not, I was able to pick the entire dessert up with my hands to do this. 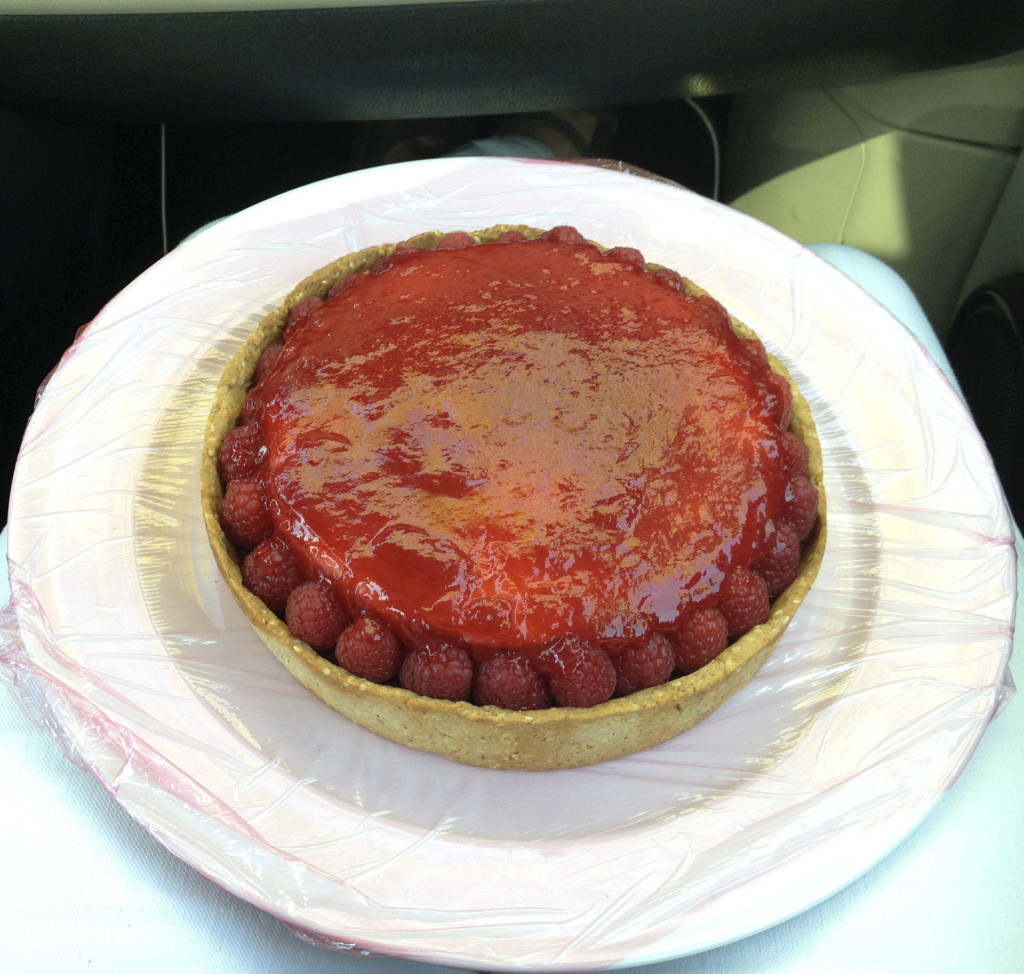 Here’s a better shot of it on my lap and on its way to a dinner party with the AC blasting on it all the way there.  Yes, it made it there in good condition! 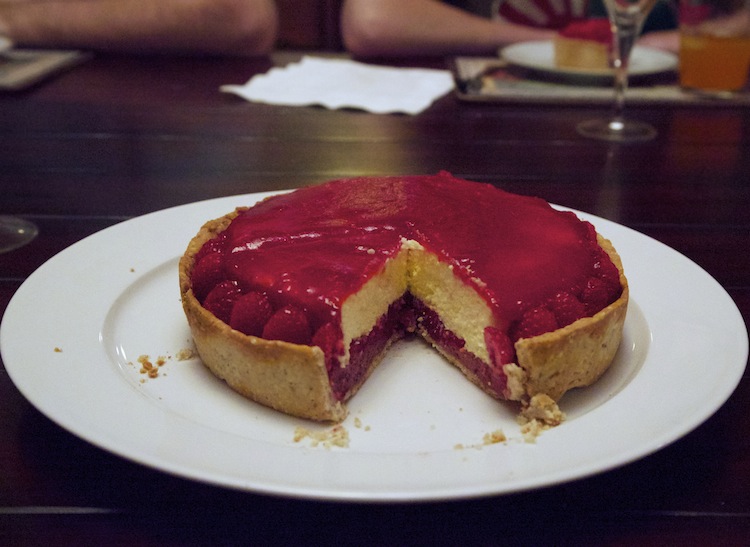 Dinner prep took much longer than we thought (we were cooking from Keller’s French Laundry after all), and so here is Pierre Herme’s Tango sliced for dessert at around 10:30 that night.  It exceeded all my expectations and I only wish I could have presented it better, but I’m just keeping it real. 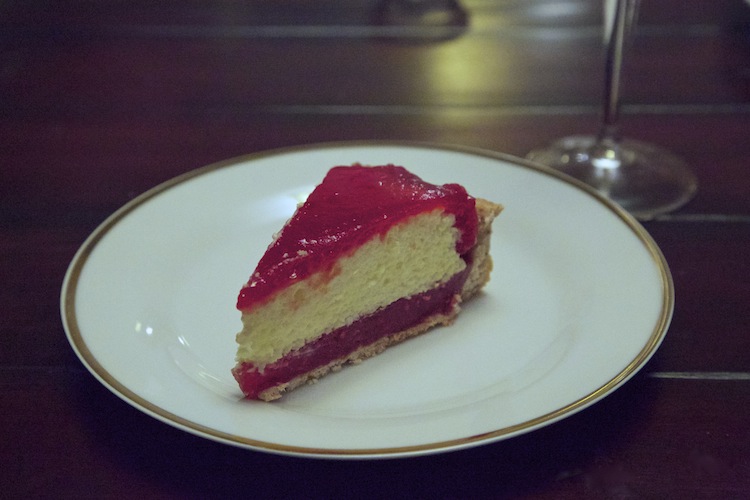 Truly an excellent experience, and a remarkable dessert.

More of all things Pierre Hermé: