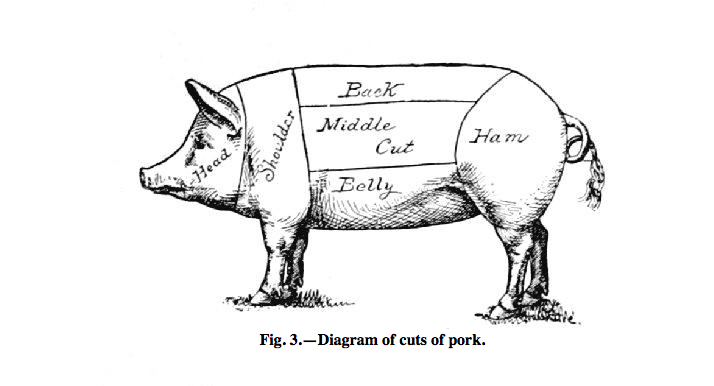 Last November when I was trying to make a decision about the turkey we’d prepare for Thanksgiving, quite by accident, I saw a news segment about a local turkey farmer.  In San Diego?  I immediately researched to find that yes, we really did have someone who raised turkeys in Valley Center, just north of San Diego.  Of course I jumped at the opportunity and ended up not only with an excellent organic turkey, but I was able to meet the farmer, Jack Ford of Taj Farms who delivered the bird to my kitchen.  We had a great talk about how he started raising poultry and other animals on a farm that actually began as a hobby.  But this isn’t about the turkey.

When Jack was discussing his farm with me, I learned he had a whole pig available for purchase. Yes.  A whole pig.  It had been lovingly raised for another family who had to back out of their purchase at the last minute.  Bear in mind there are just two of us in this house, but I couldn’t pass up the opportunity so called my best friend who, being the intelligent woman she is,  also understands the value of amazing pork and asked if she’d split it with us.  Surely, 150 lbs. couldn’t be that much to split, could it?  Goodness.

Jack delivered it and honestly, it was much more pork than I imagined it would be.  In fact it was much more than Jack thought it would be — 50 lbs. more.  In anticipation of the pork’s arrival, I’d cleaned out the freezer in my kitchen and completely gutted the small freezer in the fridge in our garage, but I had no idea my split of an entire pig could amount to so much.  Visions of bacon flavored everything began swirling in my mind as I looked at the mound of individually wrapped pieces of frozen meat covering most of the counter space in my kitchen.  Perhaps I might purchase a porkie food truck and sell to the masses — or at least a few dozen pork lovers every now and then.  Surely it would take forever to eat it all. 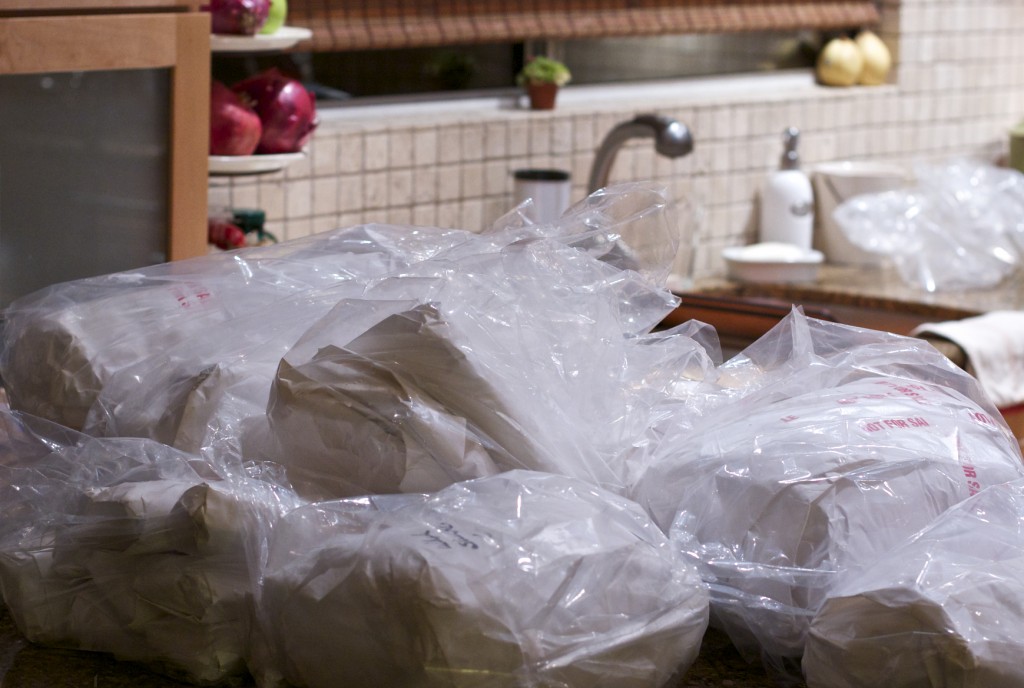 Beyond pulling a chair up to the table, grabbing a fork and knife, and donning a bib, where does one begin when faced with a 22 lb. fresh ham, a 10 lb. shoulder, two lovely loins with ribs attached, ham steaks, ham hocks, ends, neck bones, small ribs for barbeque, ham steaks, lots of bacon and country sausage — and half a head.  Yes, I was indulged the head and will blame its yet to be determined destination on Thomas Keller’s The French Laundry cookbook.  Oh, the true thrill planning gives me!

I started with the largest piece — the ham —  more for a practical reason than anything else.  I’d been forced to put it in the extra fridge because I was out of freezer space and since it was frozen solid, I knew I had a bit of time to decide what to do with it before it completely thawed.  Jack suggested brining it and since I’ve been brining our turkeys for years and have also brined a bit of pork before, I decided to go that route.

I’d never prepared a fresh ham before, and from what I knew about a traditional ham, by most people’s standards today, this huge piece of meat wasn’t technically a ham.  Or was it? Originally, the “ham” or hind leg of a pig was cured by salting, then smoking, so that it could be preserved through the winter months.  That salty, smoky taste is what many think of as ham.  What I had was a piece of raw pork just waiting for treatment.  And once I’d decided upon what that treatment was, I knew I’d also have to figure out how to cook it because the guidelines for “cooking” a store-bought ham wouldn’t apply here.  Often, the hams prepared and sold in the market are halved into either a butt — the upper portion — or the shank — the lower portion.  We’ve all seen whole hams as well, but like the smaller cuts, they’re most often already wet cured with salt and nitrates — often injected directly into the meat for quick curing, then smoked.  This process is what preserves the pink color of the raw meat which is associated with mass produced hams.

Who knew I’d find so many differing opinions about how to prepare it.  Some preferred a simple roasting with preparation involving scoring the skin and fat layer, then nestling cloves of garlic in the cuts.  Alas, my fresh ham did not have skin or fat.  And there were many who felt that a fresh ham was absolutely no different than a shoulder, so why prepare it differently?  A pork roast is a pork roast, right?  When you consider that on any animal, each set of muscles is used differently, no, one piece isn’t like the other so needs to be prepared differently in order to make sure it turns out best.  Tougher cuts of meat do well with braising, or cooking slowly in liquid, and others benefit from roasting whether on the grill or in the oven.  Because a fresh ham is a fairly lean piece of meat, roasting is best.  But at what temperature, and for how long?  It seems there are a variety of preferences to that  as well.

Because so many who have worked with fresh hams before have had the skin and fat attached, a high heat for some portion of the initial roasting time was recommended.  I have done that with large cuts of beef before and thought the end product was excellent, but again, my fresh ham lacked both.  I wondered whether it really mattered or not because ultimately the point of the high temperature is to get a good brown on the exterior of the meat, allowing all the interior fat to be sealed in as much as possible as it slowly breaks down during the roasting time.

My head full of all things fresh ham, I decided on Chef Ryan Farr’s “Chile-Brined Fresh Ham” recipe.  When we visit San Francisco and stop by the Farmer’s Market at the Ferry Building on Saturday, we love to visit 4505 Meats booth to order from their ever changing menu and love every bite, so how could I go wrong?  Besides, he had me at “chile.” 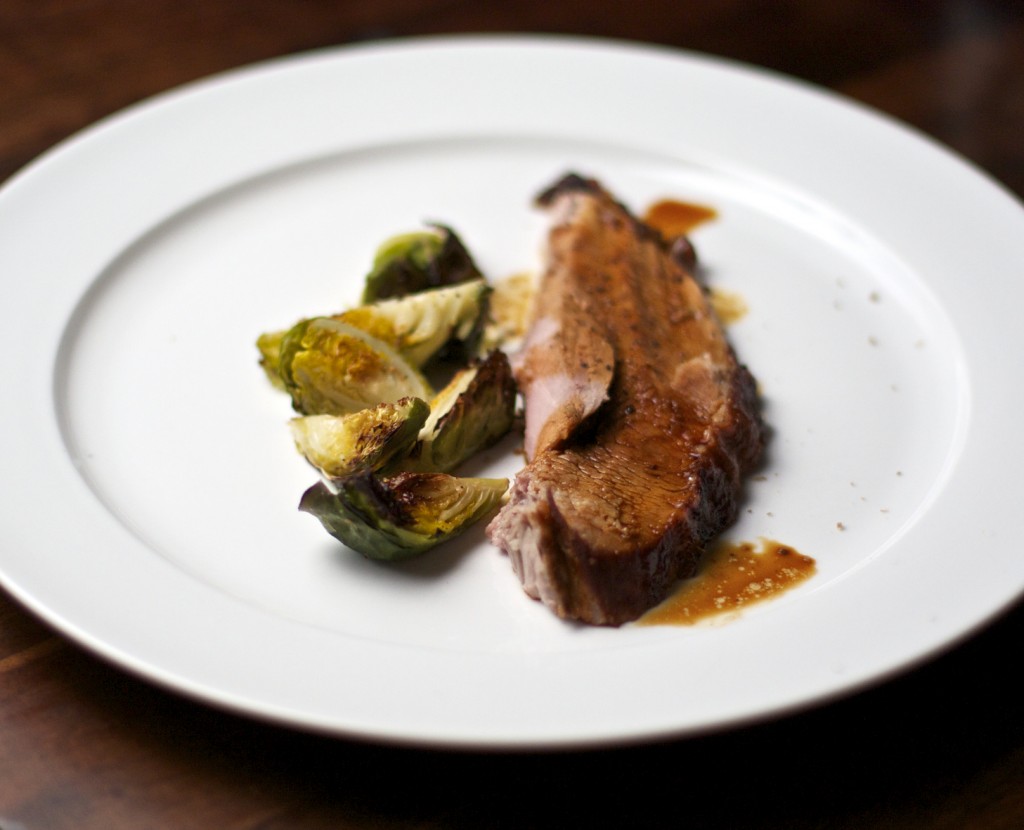 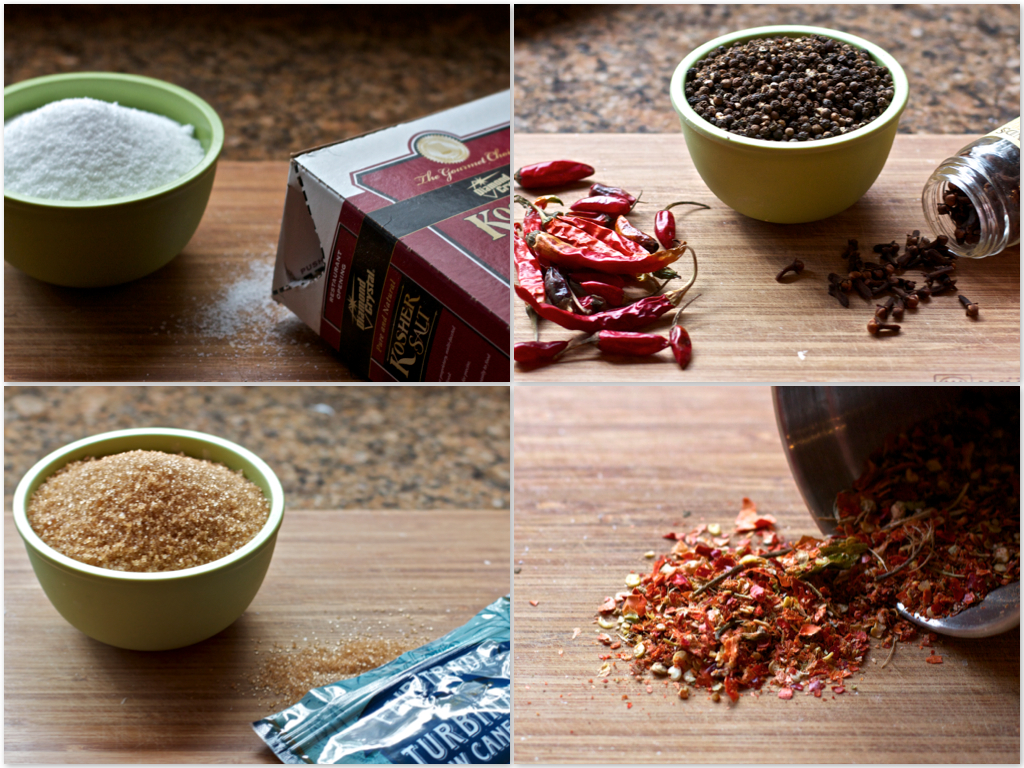 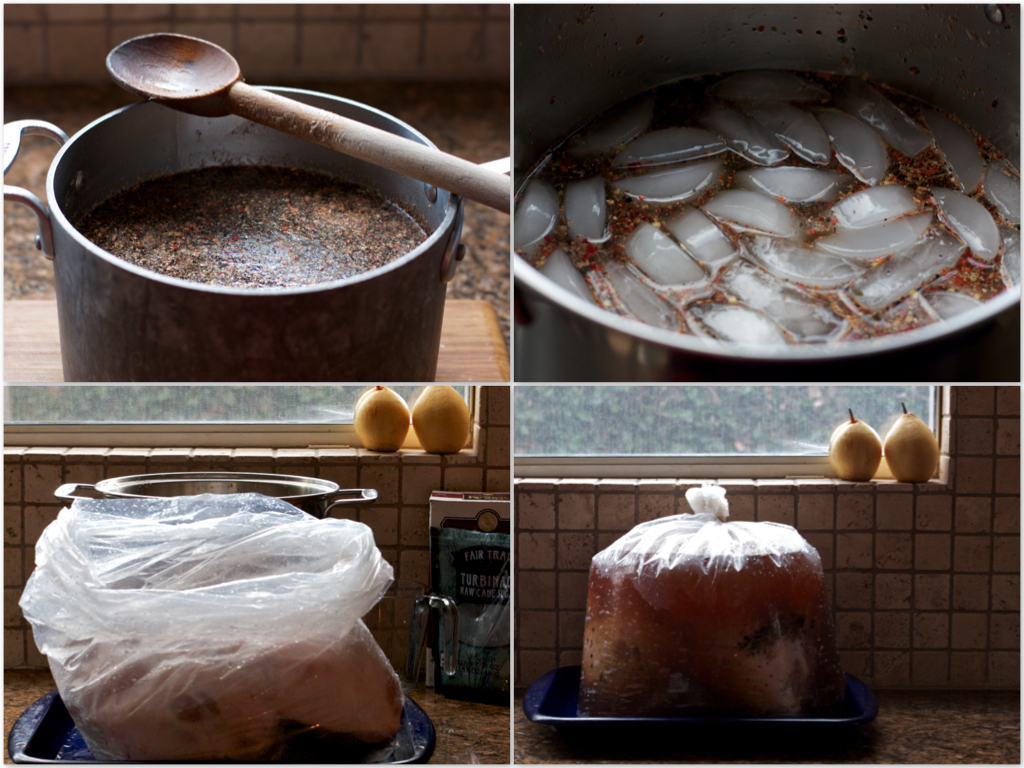 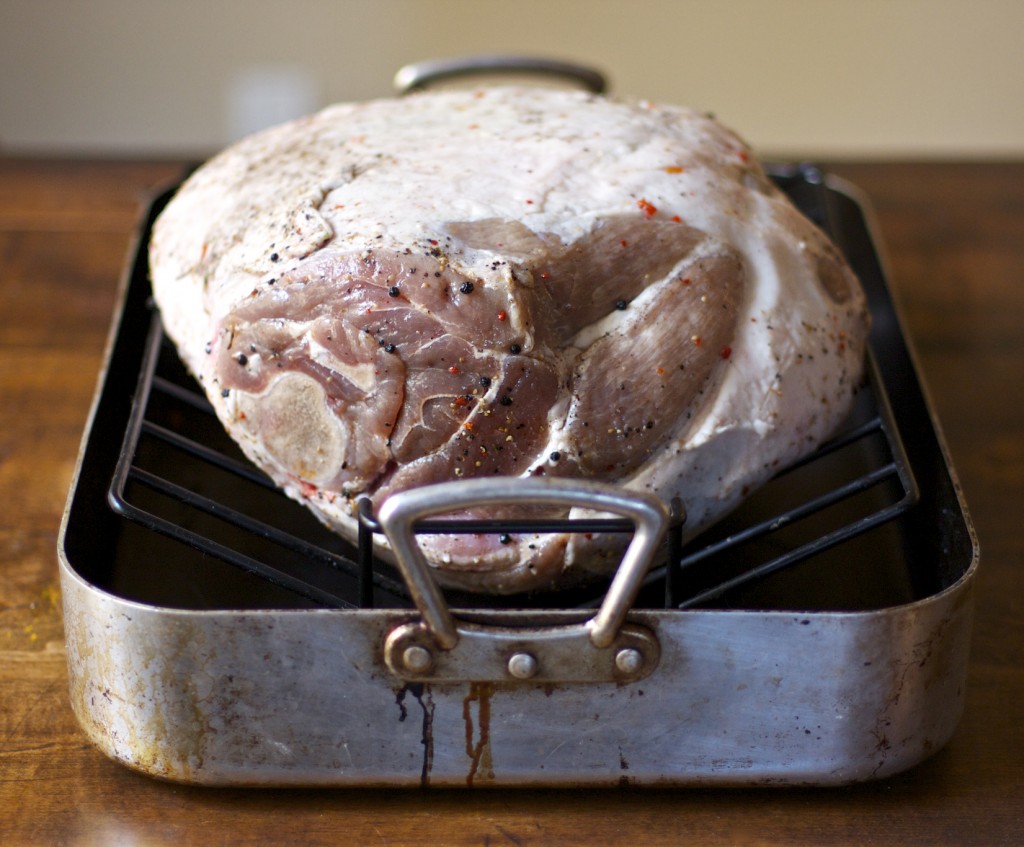 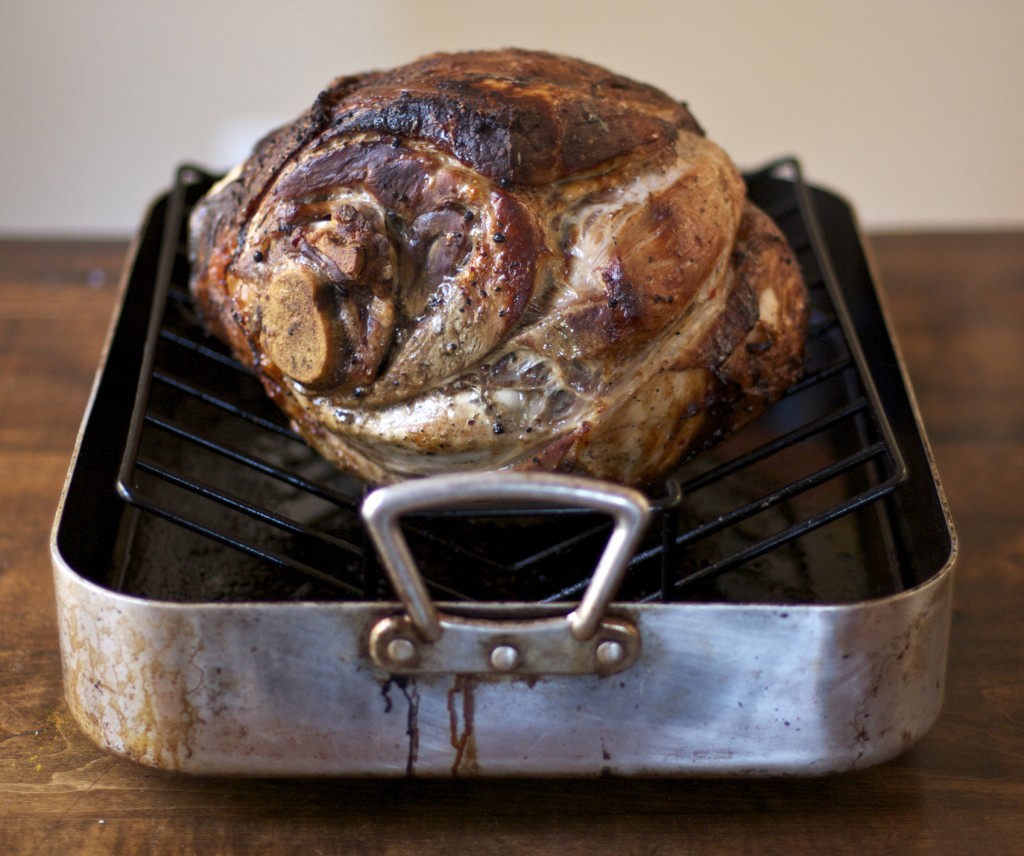 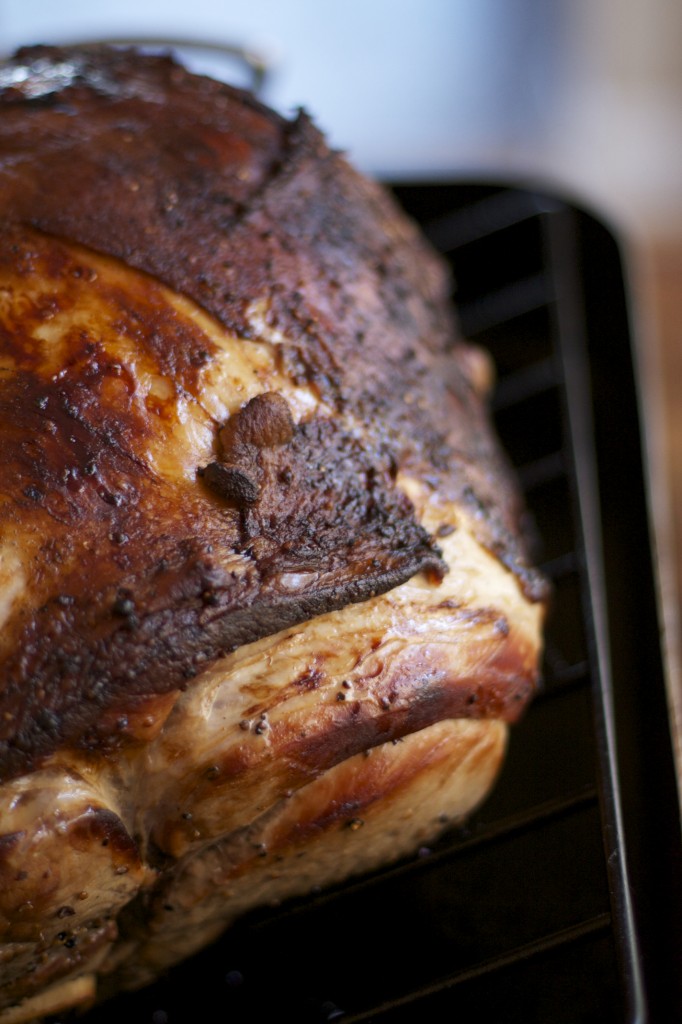 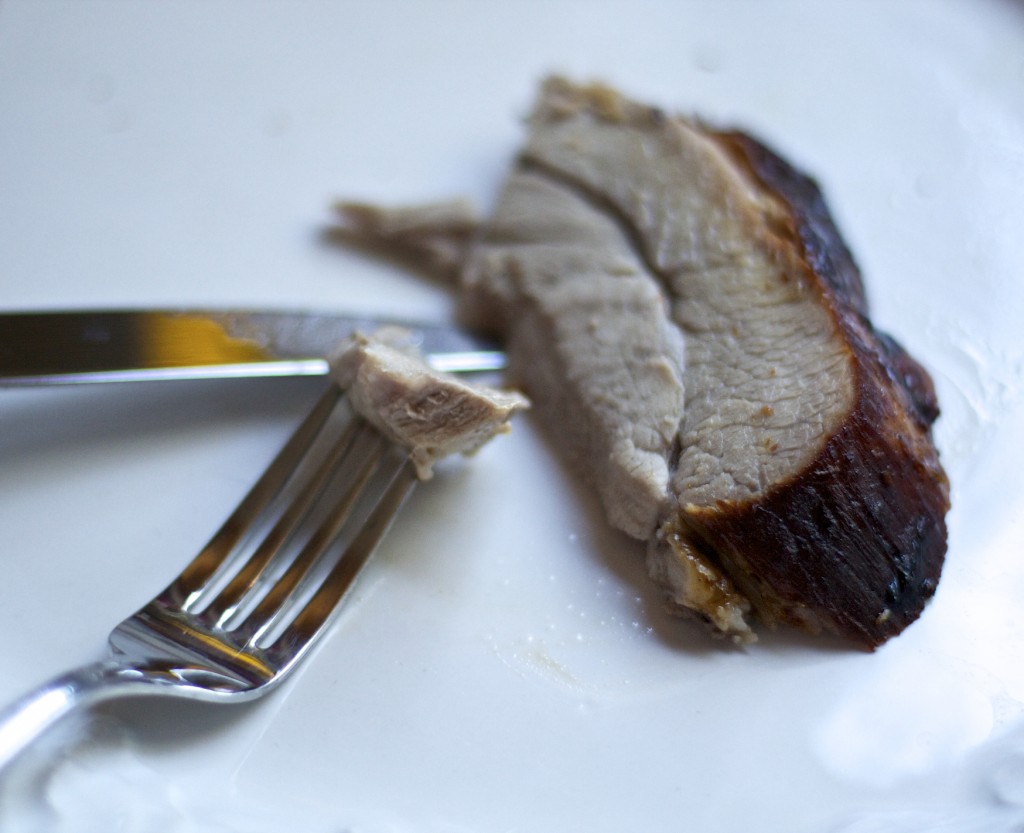 Fresh Ham Recipes Around the Web