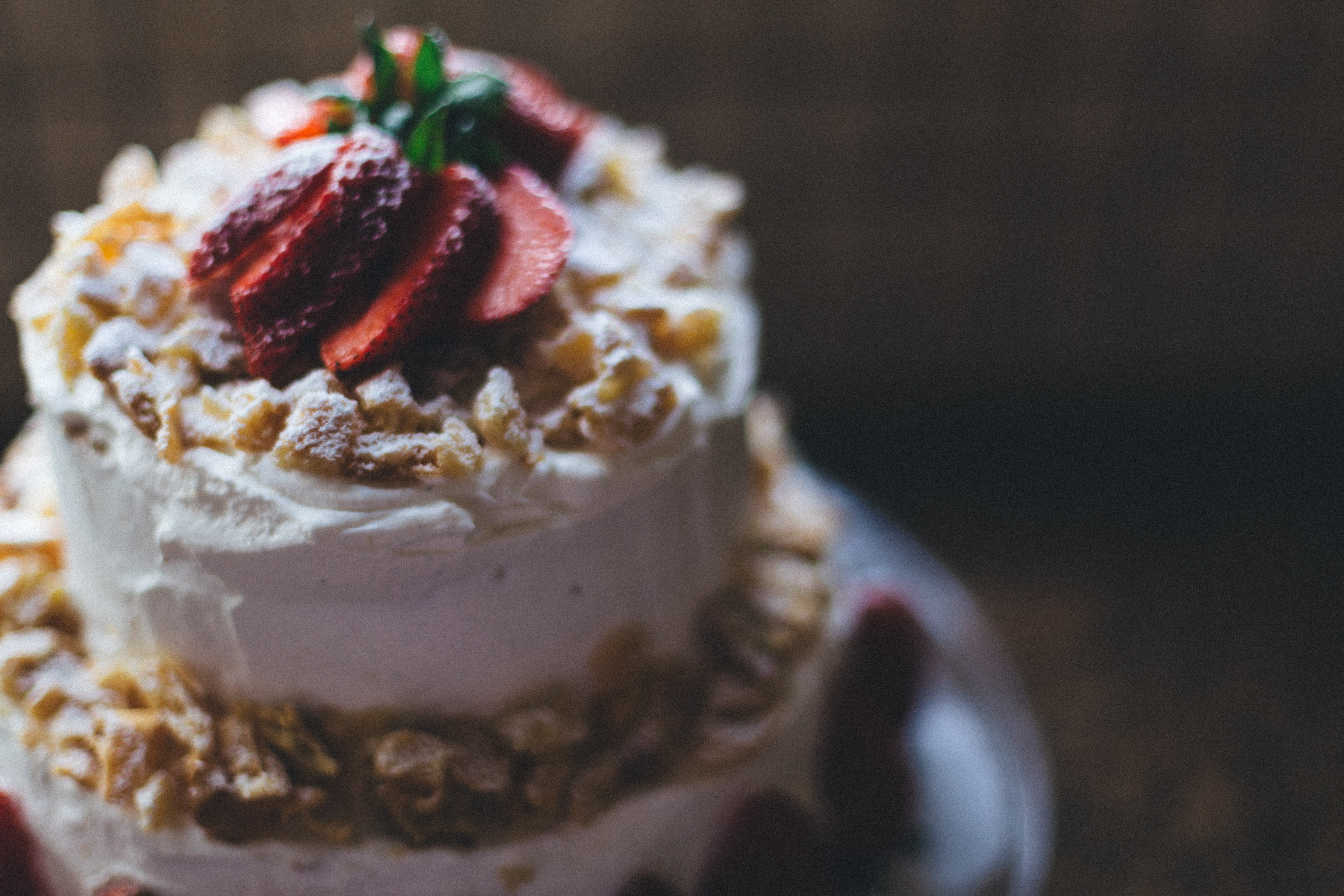 I actually did it.

I baked something recently just for the sake of it and enjoyed every minute of the experience–almost. Kitchen solitude for an entire day, going through the motions, cleaning as I worked–it was lovely. This confirms that starting a baking group and looking forward to baking at least once a month was a perfect decision. Ah, but then there’s the writing that accompanies it. 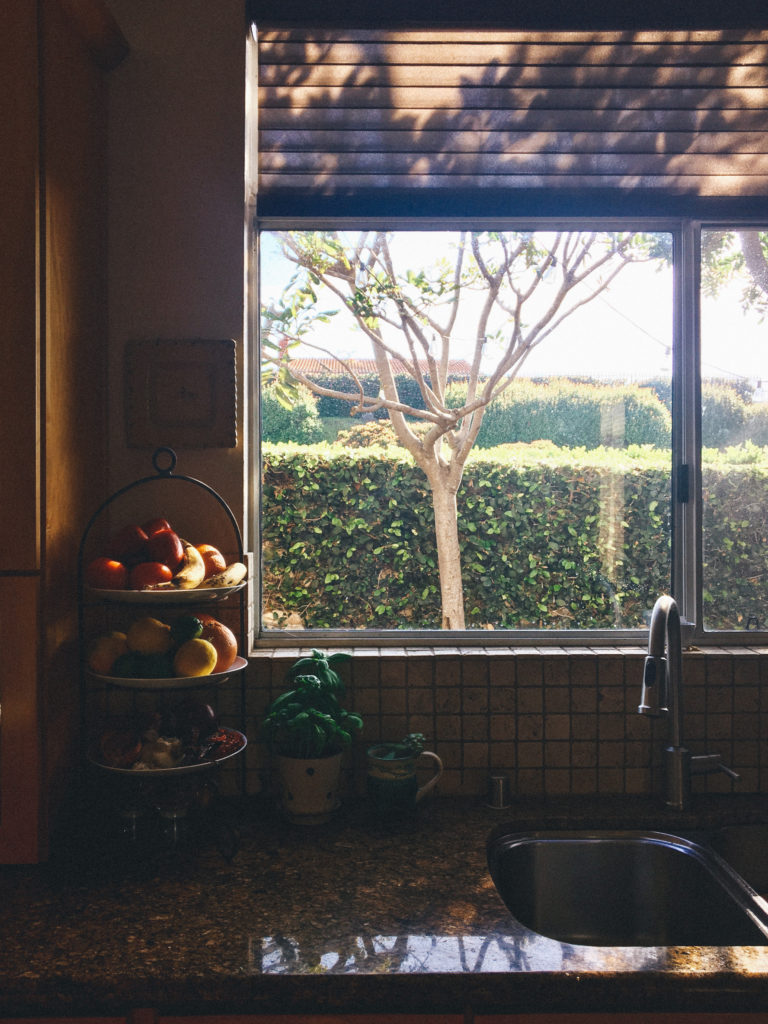 It’s May 14th, and if you’ve started a baking group called Baking on the 15th, it’s time to write about what was baked so that it’s posted by tomorrow. I should mention it’s 5:28 pm. (I should also mention it’s now 9:26 the next morning because I opted to go downstairs to spend the evening with my husband). Priorities.

So here I sit.  The window next to my desk is open wide allowing the morning breeze to waft through now and again.  A bell strung from the curtain rod chimes occasionally, breaking the silence in the otherwise quiet house. The cursor on the screen pulses and I proceed, fighting the old habit of turning this into something procedural. I don’t want it to become that because it will take the pleasant aspect of the baking away. I’d rather share the experience than the minutia. That would make this the sort of post that will leave certain types wanting to scroll down the page, impatient with the idea of having to read something personal before getting to the recipe.  The sort of post that dilly dallies around, just like I do on most days. So many words!

I dilly dallied around in the kitchen that morning, cleaning. The idea that my kitchen needed to be clean before I began baking may seem strange, but I’m not the world’s neatest baker. Adding to what is often a good amount of clutter left from dinner the night before wouldn’t do at all. I was determined to make sure that my kitchen was organized the entire time I spent baking. I thought at the time that perhaps that was the real challenge that day, and not the choux. 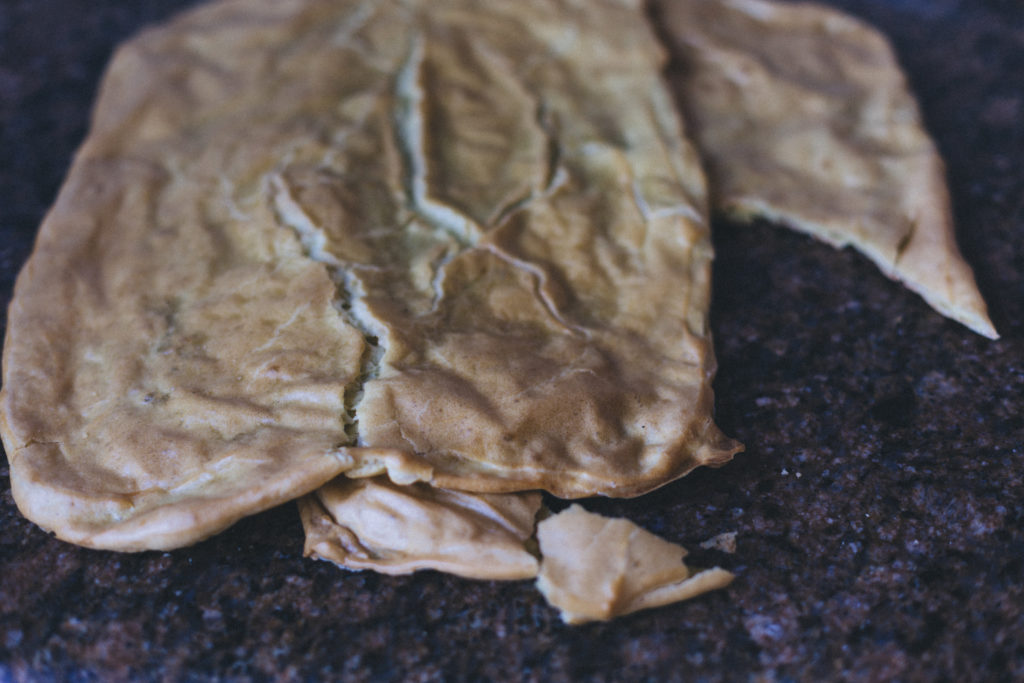 I chose the recipe for Strawberry Choux Cake because I couldn’t resist the idea of a cake that seemed as if it would be a giant cream puff, but I also knew it was because I needed to improve my choux making skills. I was fairly young the first time I attempted making choux for cream puffs, not much more than a stiff wooden spoon and a lot of elbow grease was required. Since that time, I’ve made a croquembouche complete with spun caramelized sugar (which promptly suffered from the humidity and developed a sort of Leaning Tower of Pisa look), a St. Honore (which had absolutely no redeeming qualities),  and eclairs, which, after my less that stellar record with choux to that point, turned out fairly nicely. I thought surely, success would be mine this time.

In the end, I did succeed in keeping my kitchen organized and relatively clean. Unfortunately, the unexpected interfered. Carelessness and no small amount of smugness on my part were also to blame. 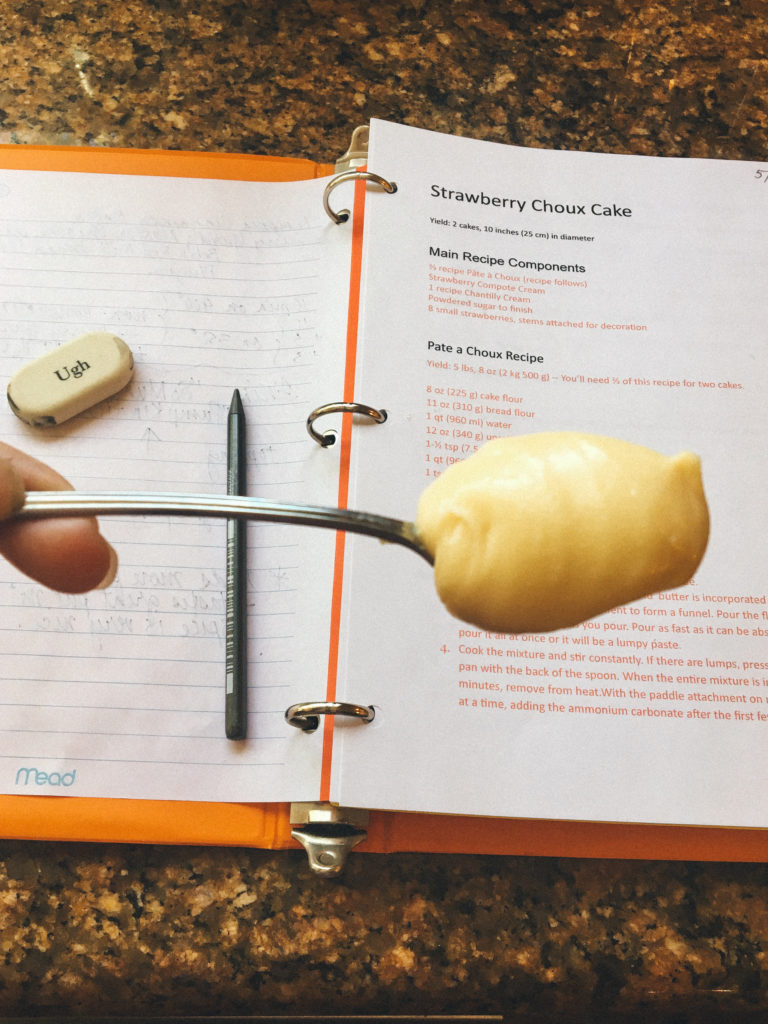 Of course, I read the recipe at least four or five times. Thoroughly! Still, it didn’t prevent me from making several ridiculous errors:

1) Assuming my baking sheets were the correct size. 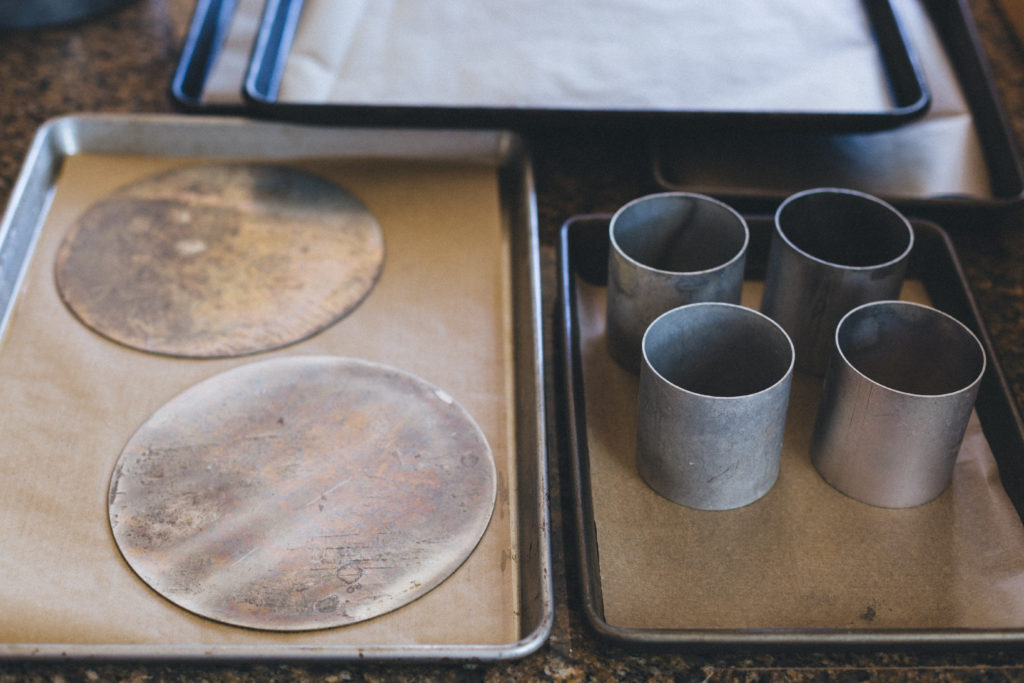 2) Baking the entire 5+ pounds of choux when I absolutely knew that I was to bake only two-thirds of the whole recipe. 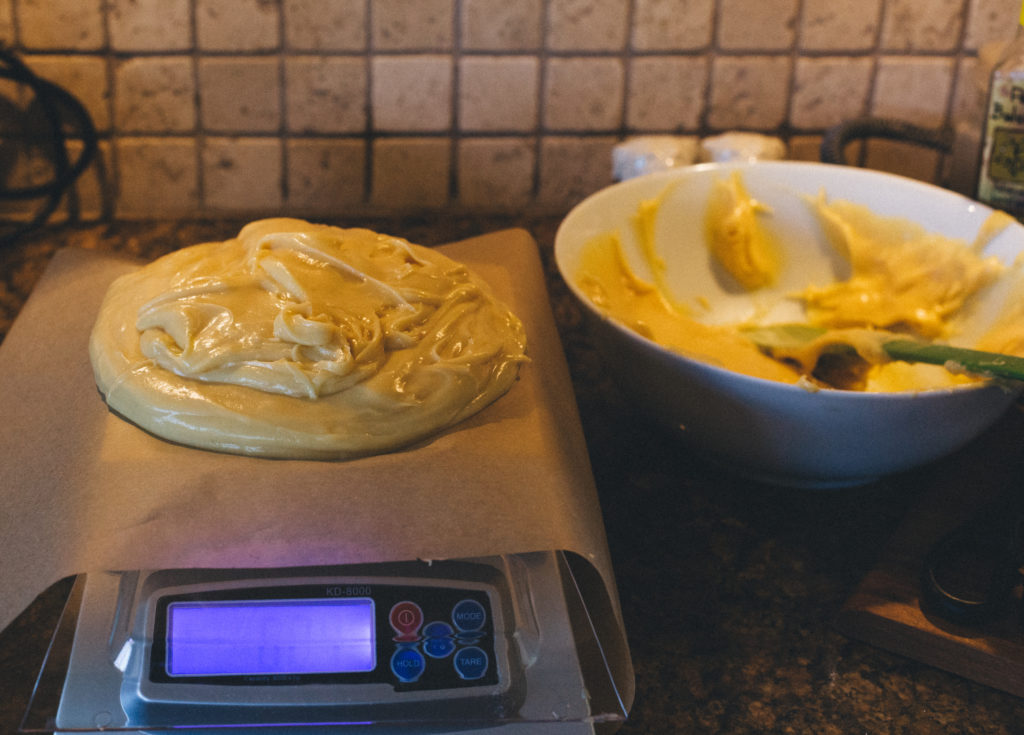 3) Placing several baking pans on racks too close to one another and having the choux rise high enough to hit the rack above it. 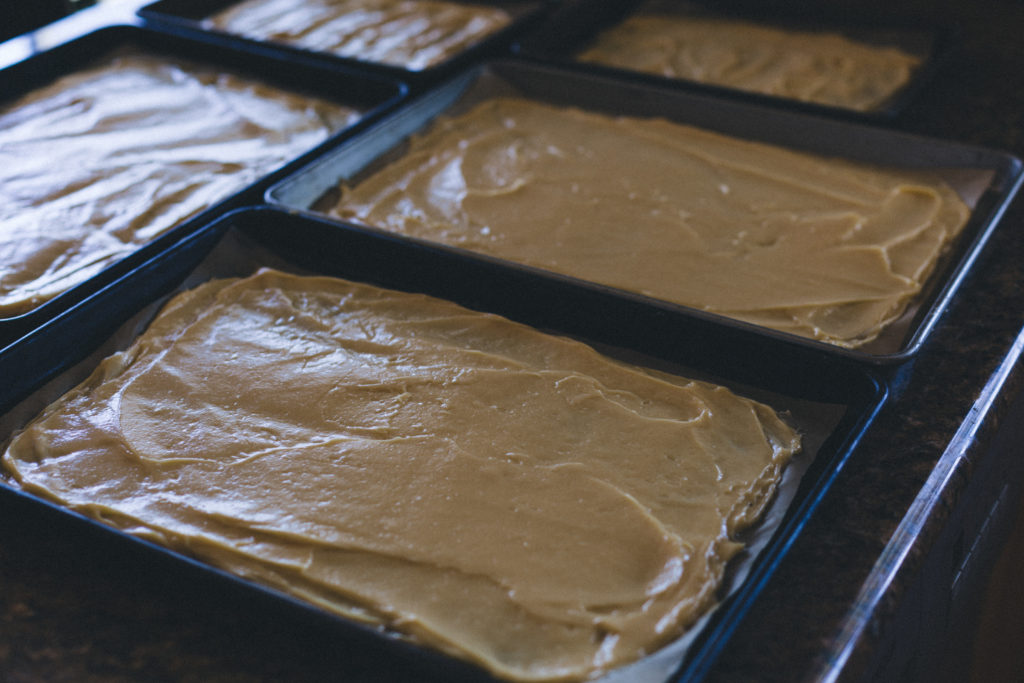 The one thing I couldn’t prevent was an oven malfunction. The large oven with three full sheets of choux shut off at some point during the baking and I didn’t realize it. Add trying to revive the puff in choux which has deflated to my experience list. Thank goodness for the two small pans of choux that turned out beautifully. 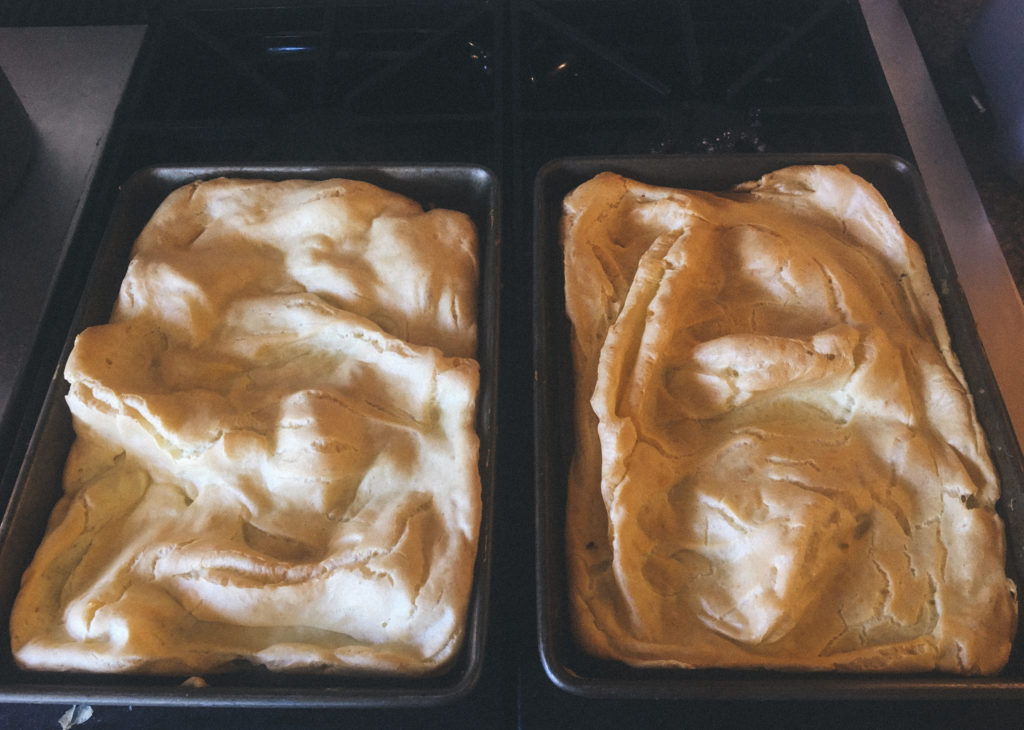 They were crisp on the outside with only the slightest bit of moisture in the inside nooks and crannies. So light and airy! 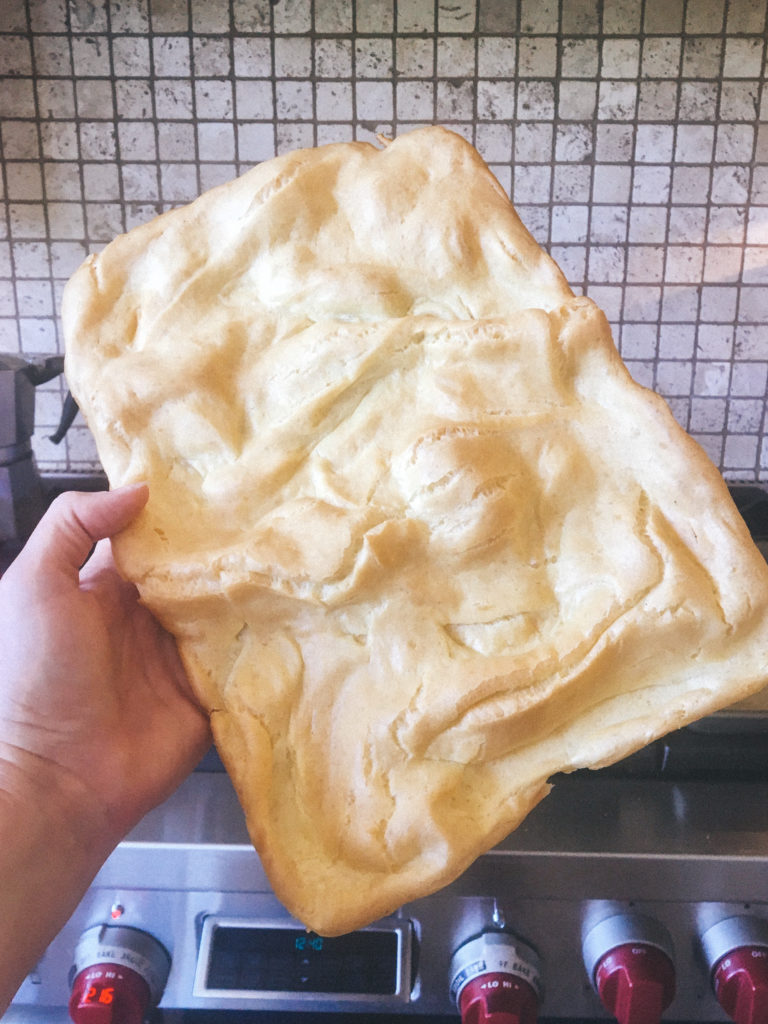 Necessity, as they say, truly is the mother of invention. Because so much of my choux could never be cooked completely, I was forced to get creative with the shape of my cake. With not much thought other than realizing the cake would be quite light in weight, I decided to stack two cakes of differing sizes. 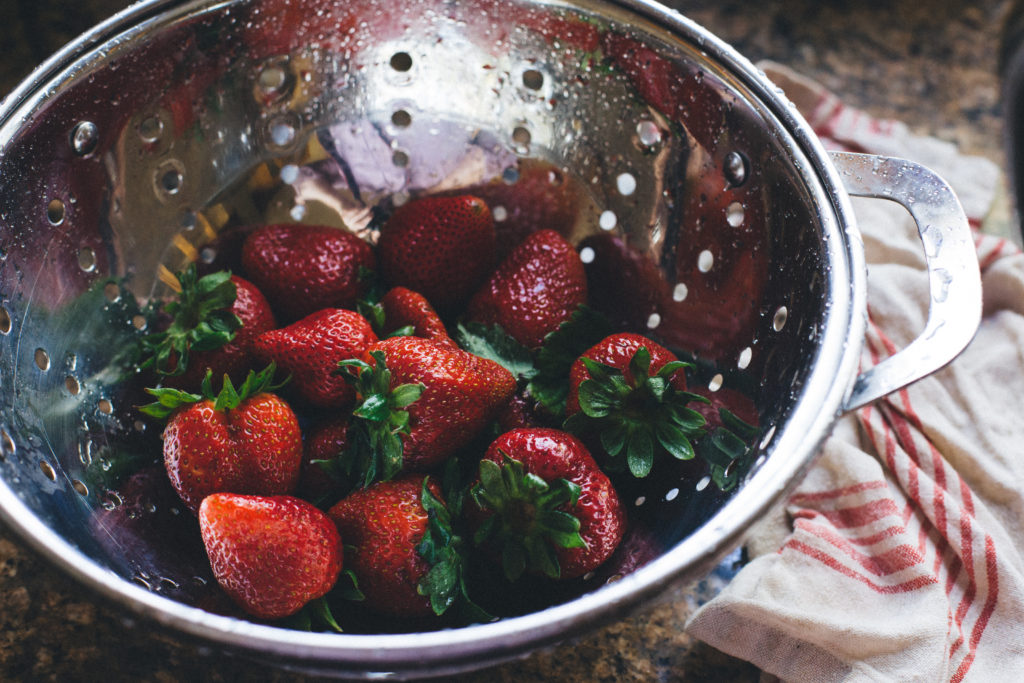 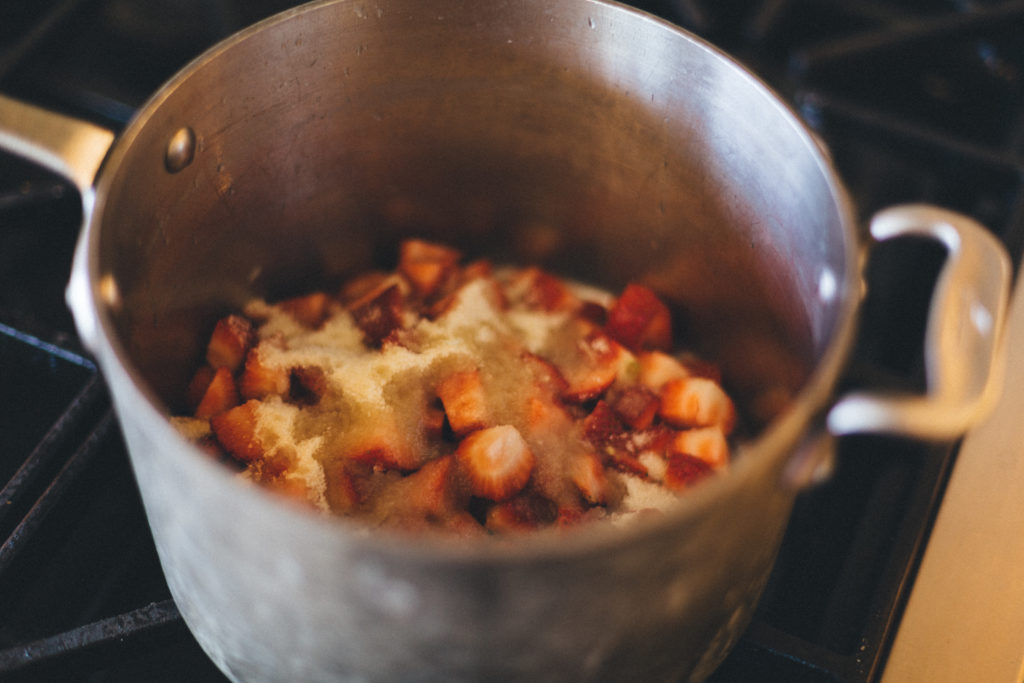 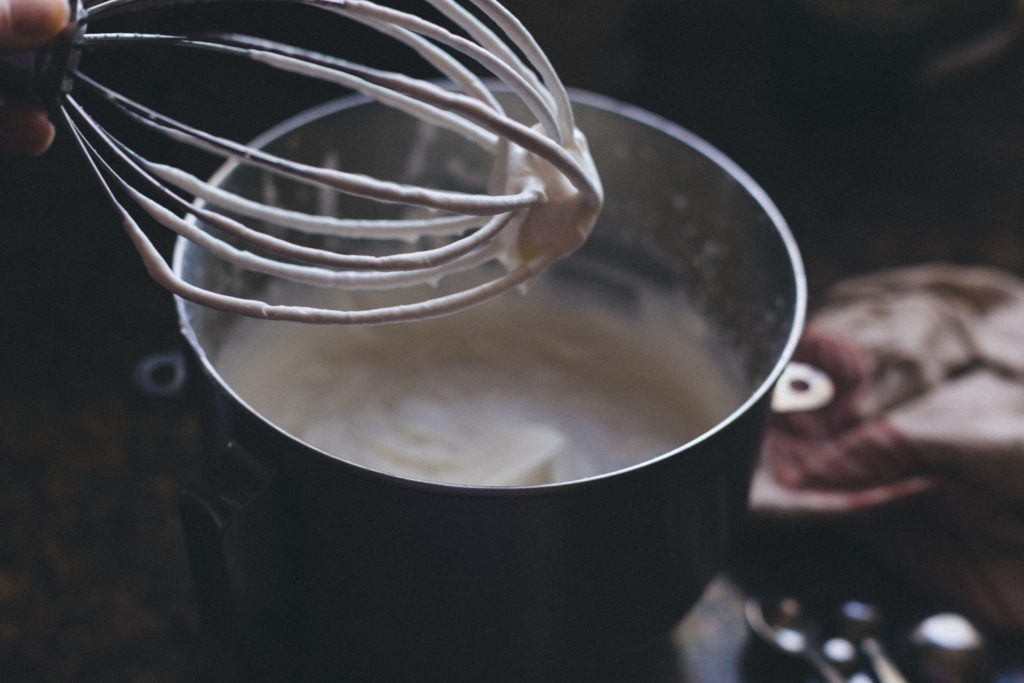 Of course stacking two cakes is over the top when the recipe called for a relatively simple single-layer cake, but that’s what was so much fun about it. It was a complete surprise. Serendipity! 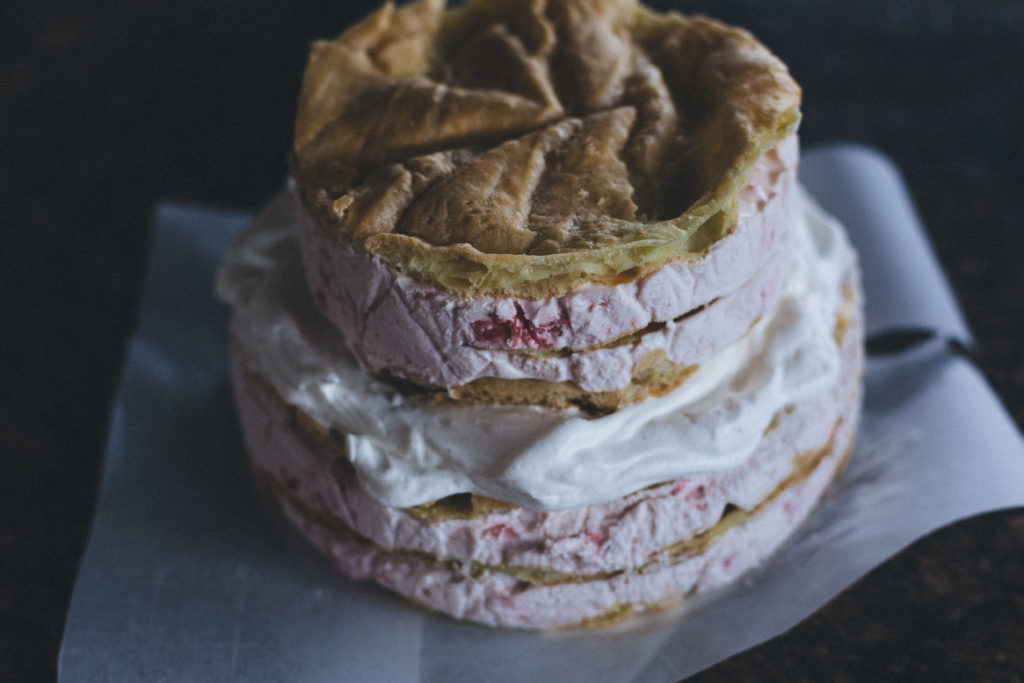 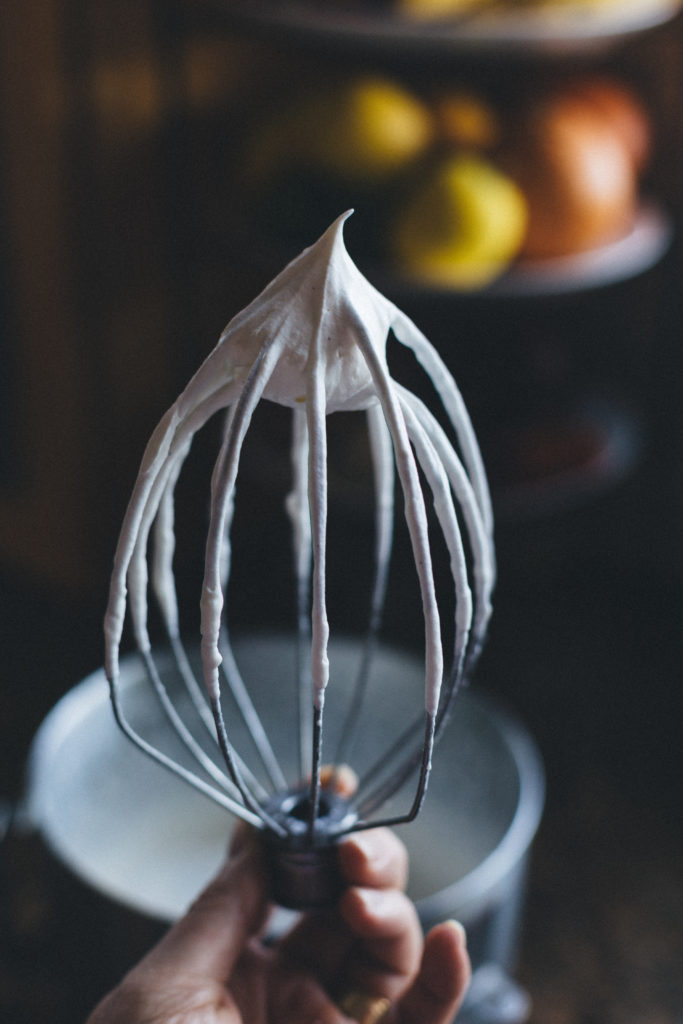 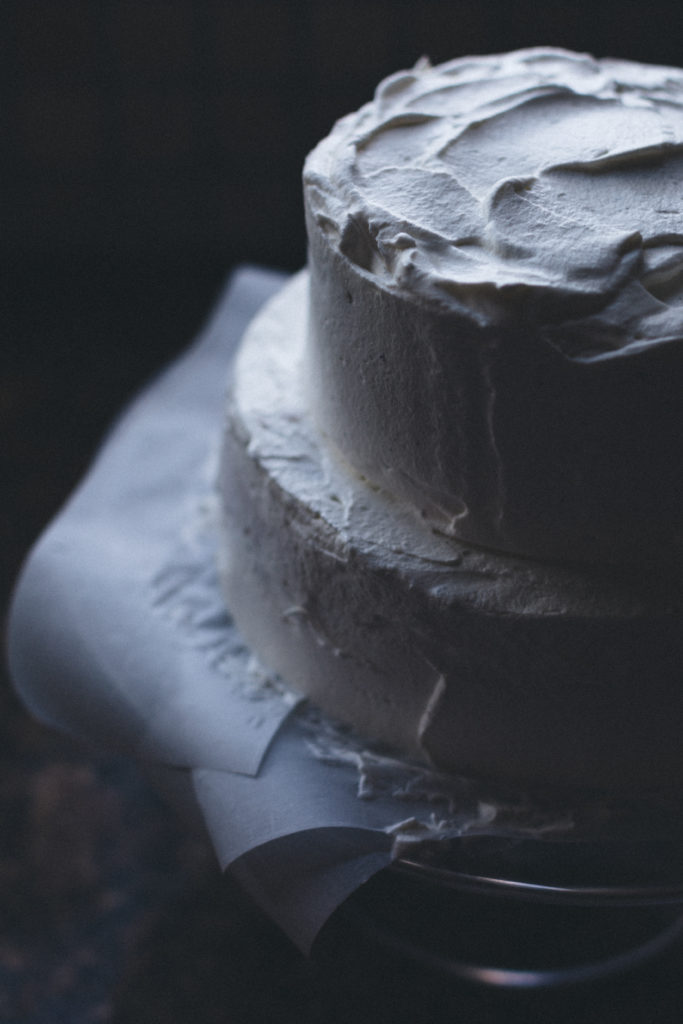 I present to you, my Strawberry Choux Cake, all dressed for a spring wedding. 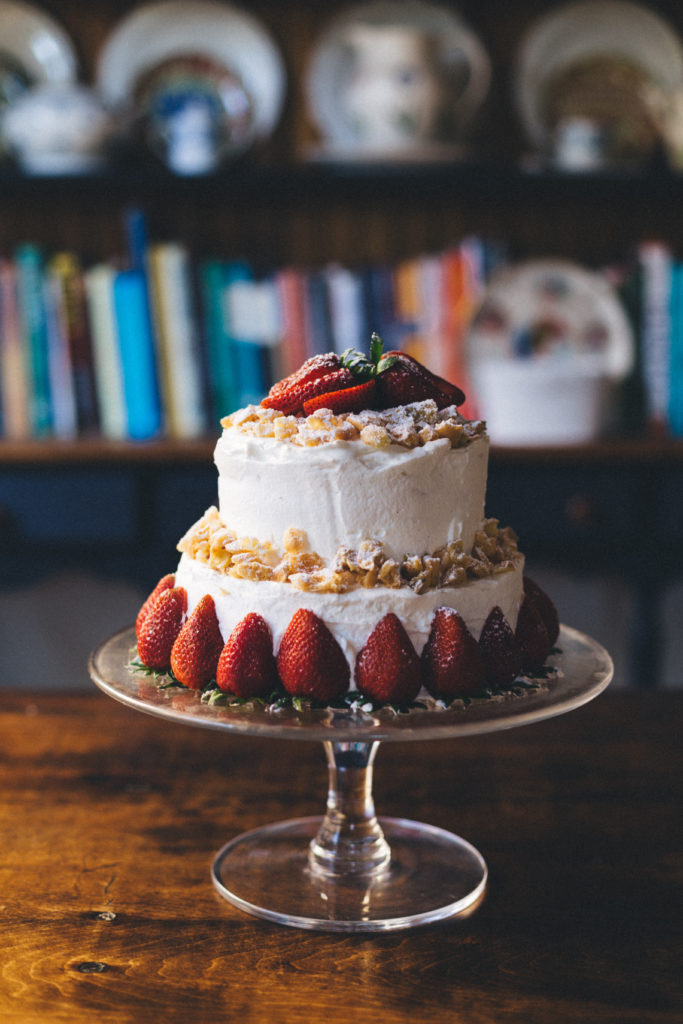 The recipe can be found here. 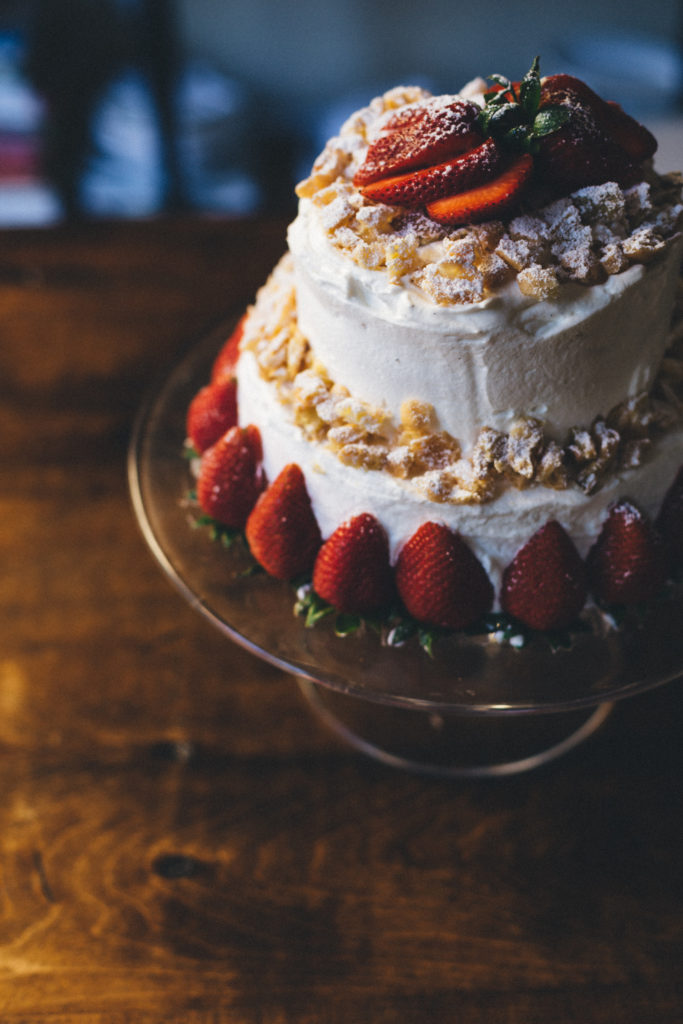 It’s the general recipe so it won’t explain the size and shapes of my cake. To create my cake, I cut three 6-inch rounds and three 8-inch rounds of choux.  Each cake had a piece of choux in the center. Although I did not insert skewers to hold all the layers together (serendipity, remember?) it was perfectly stable until slicing began. Thirty minutes in the freezer helped make slicing easier. 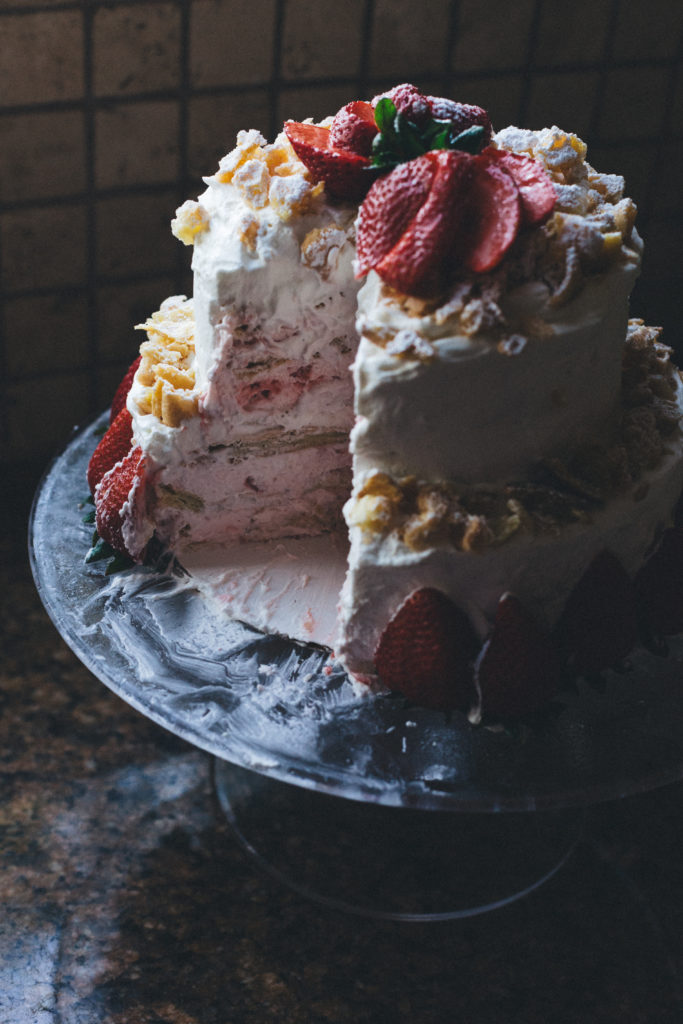 Alas, three quarters of this lovely cake remains, wrapped in plastic and sitting in our freezer in the garage.  Of course I knew that three people would never be able to consume this cake. We wanted to, but we’re actually sane. I’ve made a mental note that I cannot–will not be able to bake full recipes. Even if I had a place to deliver excess baked goods like I once did (everyone seems always to be on a diet these days) this cake is not something that would travel well.

It might make a good story to write about if you tried, though. 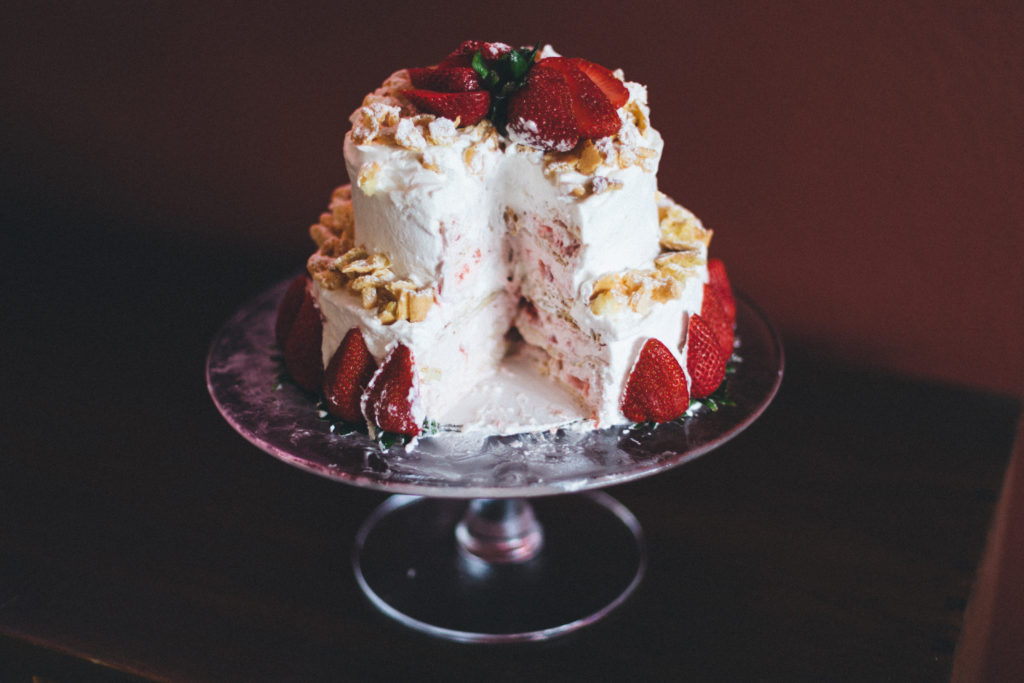 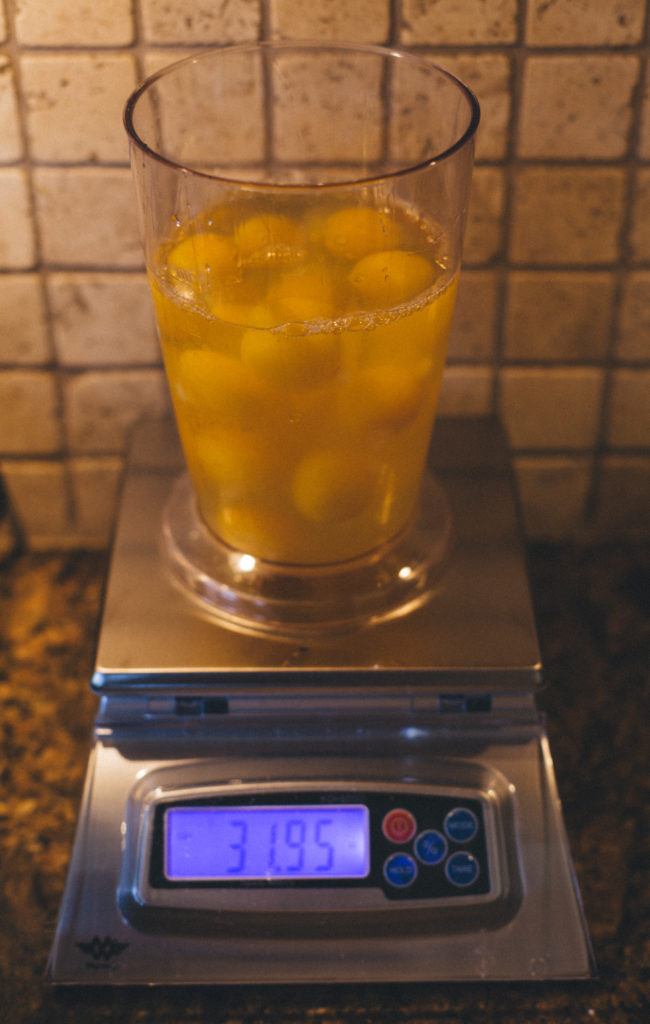 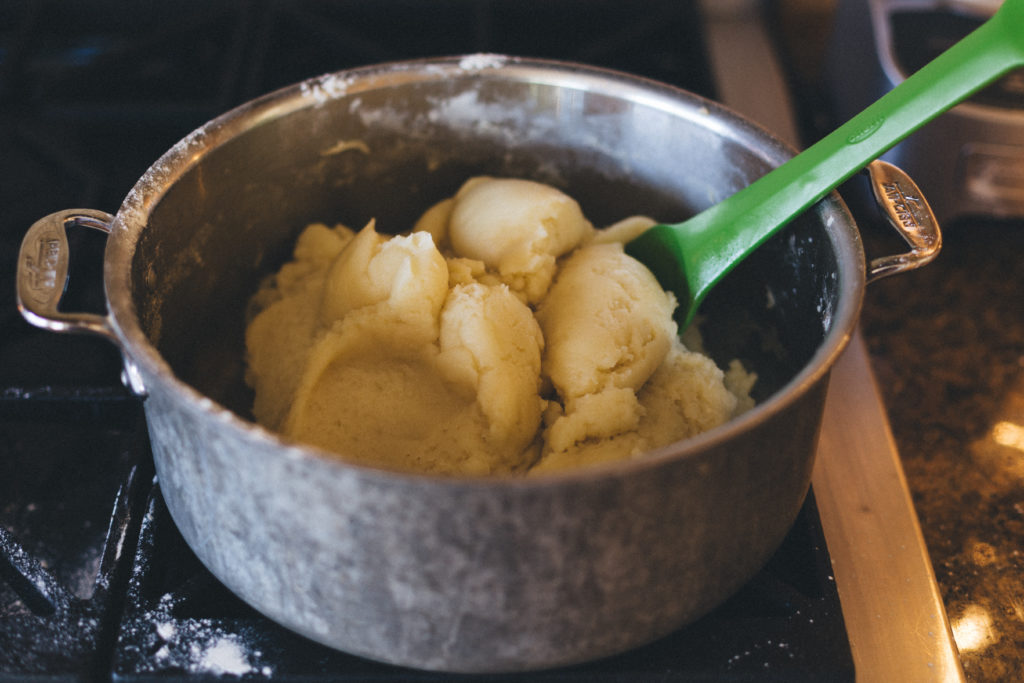 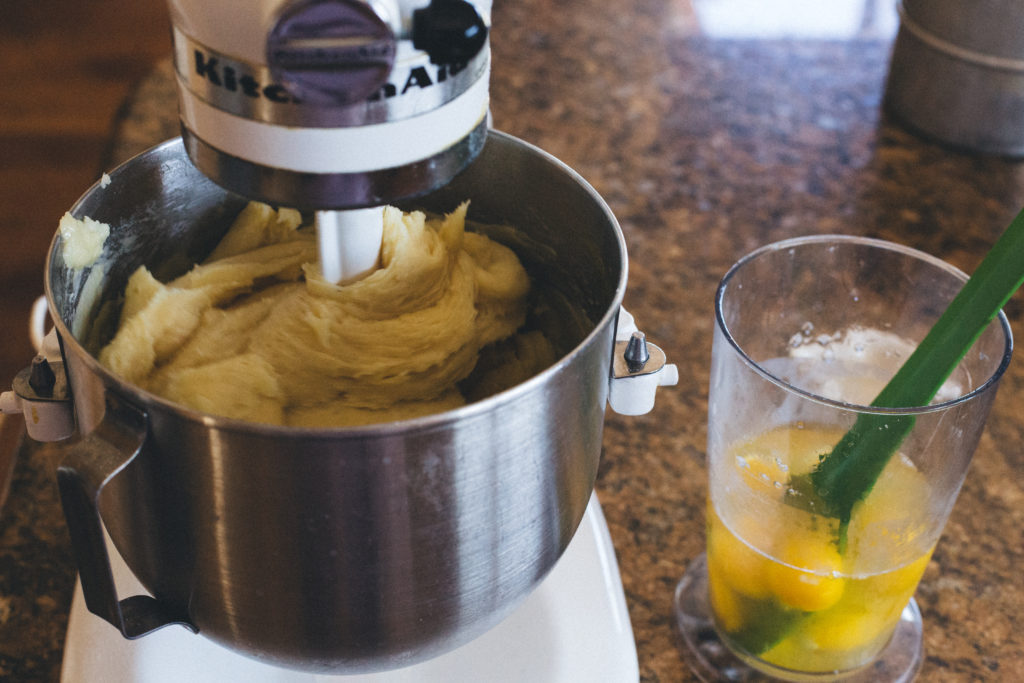 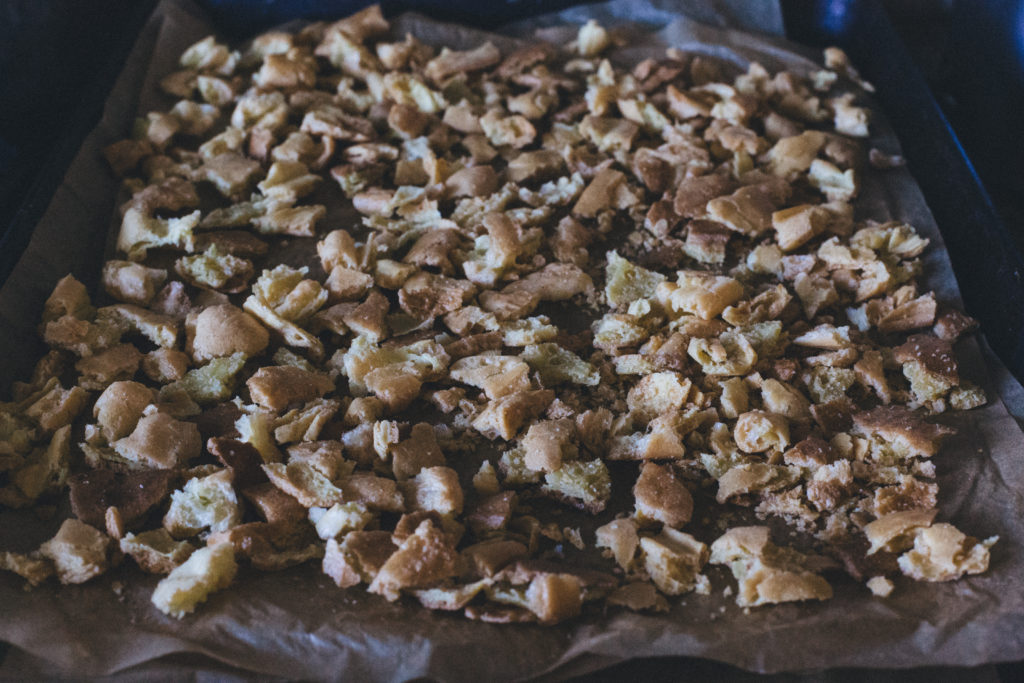 Baking on the 15th: Strawberry Choux Cake from Diane’s Dishes