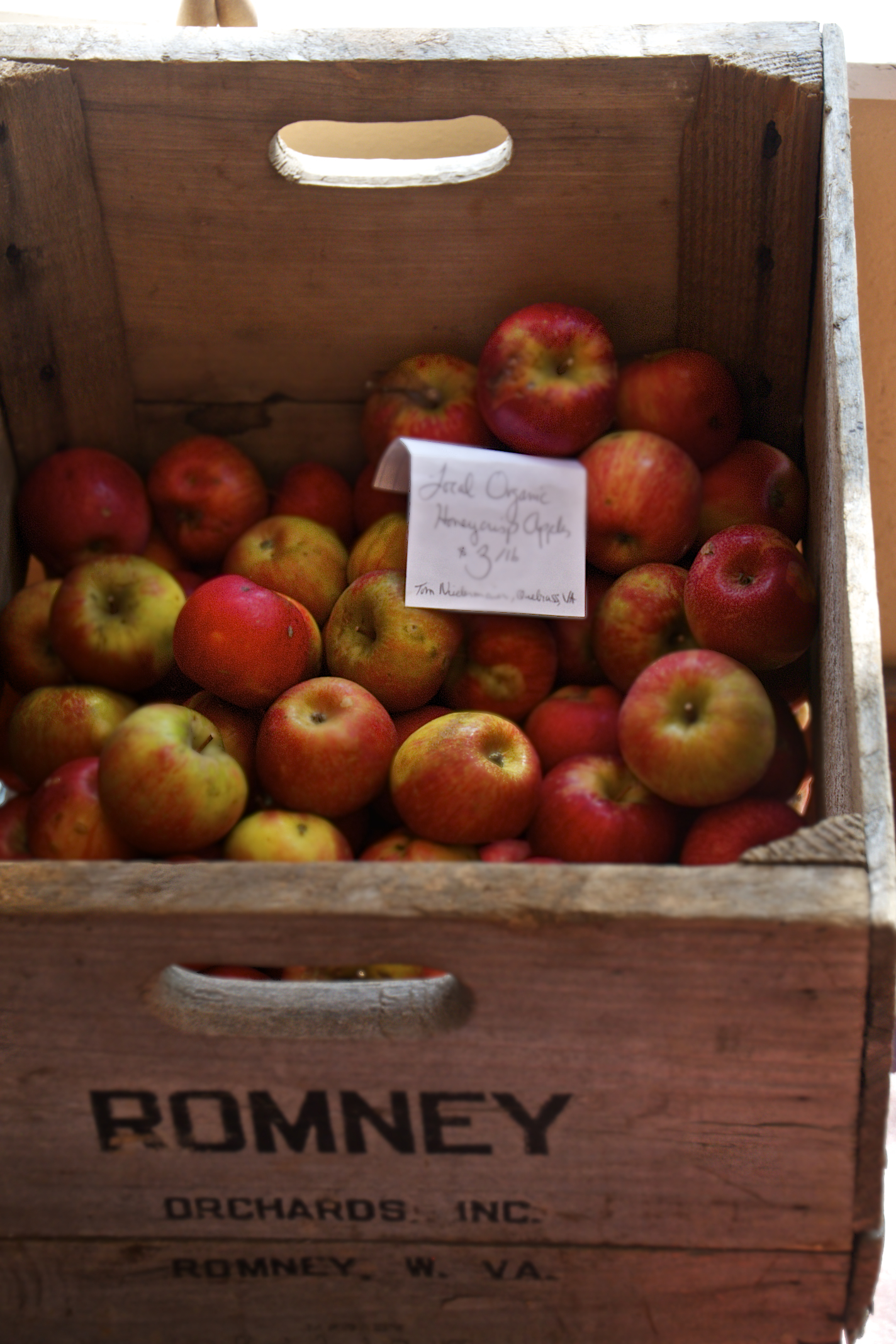 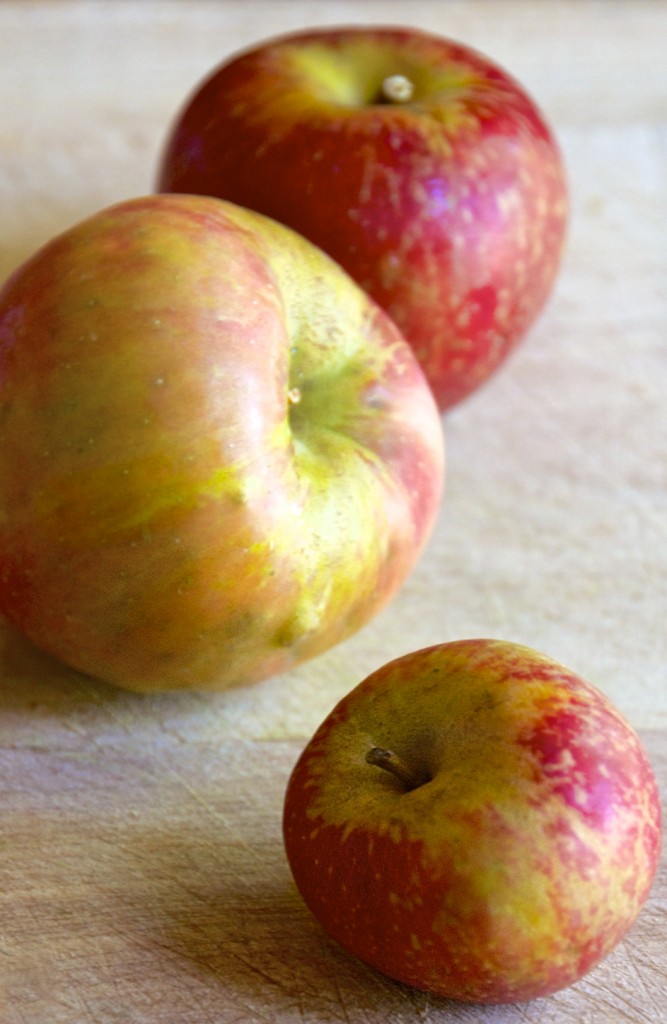 I’ve been back from my trip East for a couple of weeks now and think I’ve finally caught up with sleep and processed all my memories along with the more than 500 photos I took.  It’s a relaxing task to process photos after a trip and I find myself grinning like a sap as I work, time passing much more quickly than I’d like.  Laundry, dishes, and other chores are waiting, but to be so engrossed in a task that little else interferes with is a good thing — something that confirms I enjoy what I’m doing.  It helps when the photos I’m processing are of good things as well:  lovely places, good times with people I care about, and great food, of course.

I’ve been to visit my sister a few times since she abandoned us by moving to Virginia, but each of those times, it was winter, and so it was getting ready to snow, snowing, or freezing after a snow.  This time, I was treated to the lush green of all the enormous trees everywhere.  Too early to enjoy more than just a glimmer of the Fall color I know will come, I was able instead to enjoy what my sister and her husband both described as perfect Fall weather.  Skies were clear, the sun warm, and breezes cool enough to keep the day from being too warm.

I’m starting backward in my telling of this trip in case you’re wondering.  When I landed in Washington D.C., I was coming from nearly a week’s stay in New York state with an old friend, so describing myself as sleep deprived wouldn’t exactly fit. I was exhausted, but I quickly learned that not only my sister had taken time off, but my brother in law as well.  And?  After picking me up at the airport, we were headed directly to their boat. 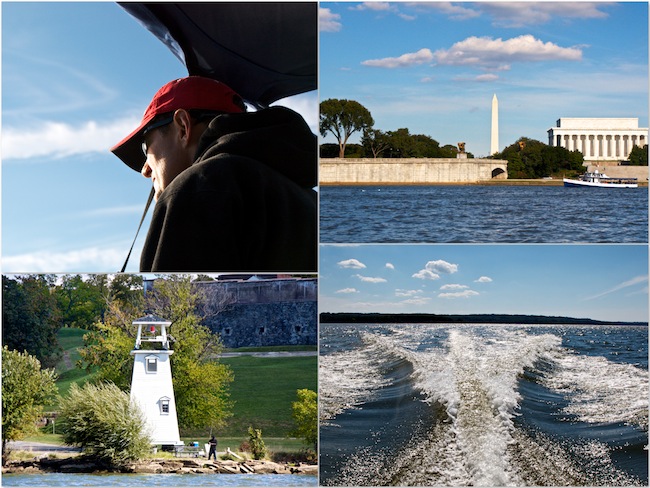 No crowds, beautiful scenery from a one of a kind perspective, lunch, and wine were enjoyed.   The fresh air restored me quickly, I grabbed my camera, and just relaxed.  We cruised up the Potomac from the area near Fort Belvoir past Mt. Vernon, Fort Washington, then Old Alexandria to drop anchor just on the other side of the bridge near the Lincoln Memorial to talk, enjoy the weather, and have lunch:  “make your own” sandwiches with some hummus on the side.  It was a lovely afternoon. 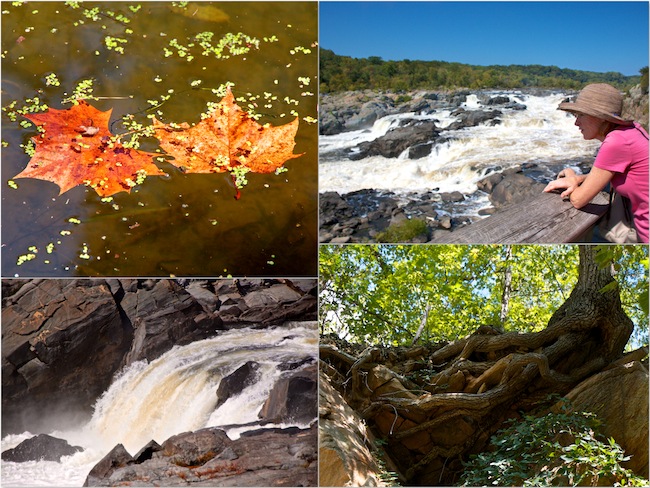 My brother in law is a fairly hard core cycler, riding to work and back each day — even in foul weather — nearly 25 miles round trip.   It should be no surprise that one of the things he and my sister enjoy is cycling on the weekends from time to time.  Whew.  I told her I wanted to get out a bit while I was there, so she suggested we do some walking along a path they’d just completed a ride on the weekend before along the old Powtowmack Canal.  There had been a decent rainstorm earlier in the week, so I was treated to amazing views of rushing water on our walk in the Great Falls Park.  I can only imagine what it must look like about now with leaves changing color — it was spectacular enough as it was!  After our walk, we stopped in at The Old Angler’s Inn for a late lunch.  They were already preparing for their dinner service, but we were able to enjoy a Caesar Salad with chicken hot from the grill in their beer garden where they were smoking ribs and preparing for a busy evening. A quaint setting and pleasant finish to a lovely day. 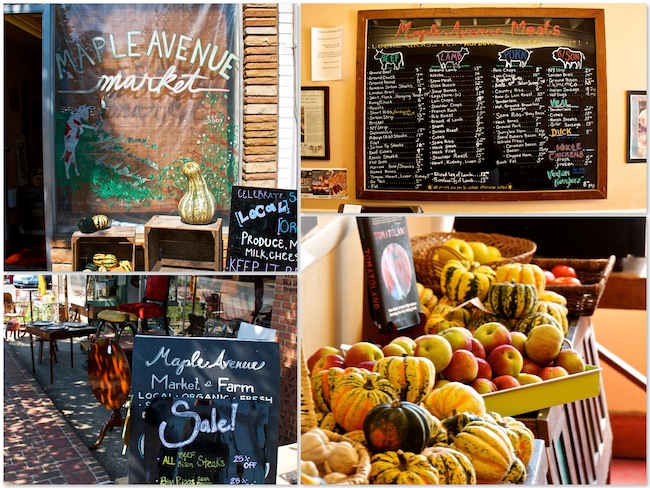 In the remaining time I spent with my sister, we had fun thinking about and shopping for a bathroom remodel they’d begun and also visited the shops along Maple Avenue in Vienna.  In particular, the Maple Avenue Market was wonderful.  We made two trips in the time I was there, purchasing Peach Margarita Mix of all things, ice cream, a spicy cilantro marinade I ended up using with chicken for one dinner, heirloom tomatoes, and some organic Honeycrisp apples I planned to sautee for pancakes the next morning, and spoon over ice cream the next evening.  What I enjoyed most is that I was able to make dinner while I was there.  My sister isn’t a foodie, so it’s a big deal when I get to cook and it’s even more fun when my brother in law joins in whether whipping up a Hot Pepper Mix (recipe coming later…) or getting out the margarita machine (who knew?) to make Peach Daquiris. 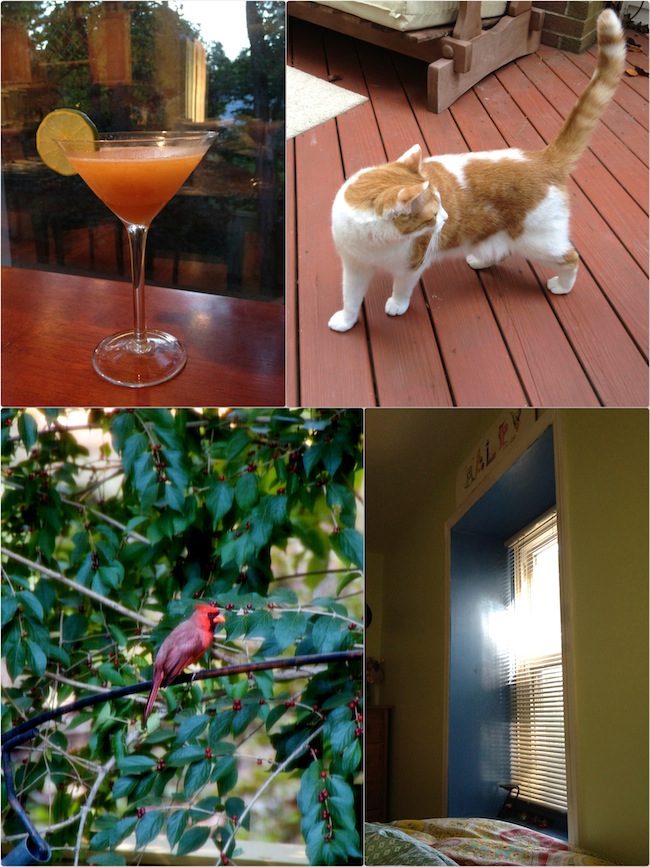 To finish my trip, the three of us drove to Charlottesville to visit with my sister’s youngest who is a freshman at The University of Virginia studying biology.  We enjoyed a late breakfast at The Virginian before getting a personal tour of the campus and her dorm.  I have to say that as much as I’m proud to be an alumni of San Diego State University, there’s just something about walking the grounds of an old college that gets me thinking of all who have walked the grounds and settled into the seats of classroom lecture halls.  I’m a Thomas Jefferson nerd, so… 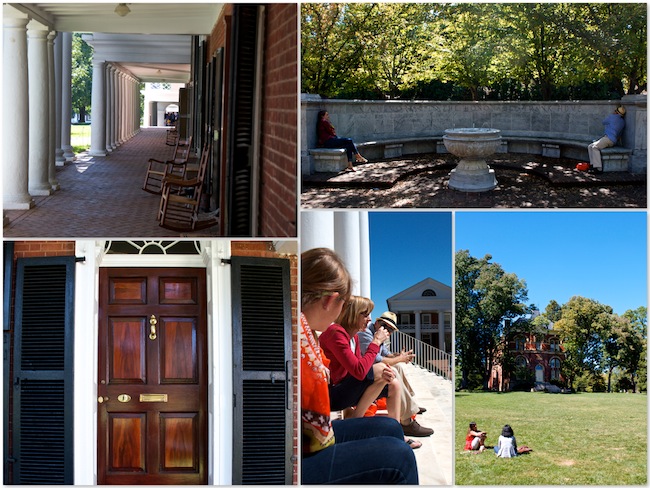 On the way back to Vienna, we took country roads hoping to be able to enjoy some wine tasting at Barboursville Vineyards, but they’d just closed.   It was a beautiful late afternoon, so we walked over to the ruins of the home of the once governor of Barboursville designed by Thomas Jefferson.  I made a note of The 1804 Inn next door for another visit when the hubster could join me for a special occasion.  What a beautiful place. 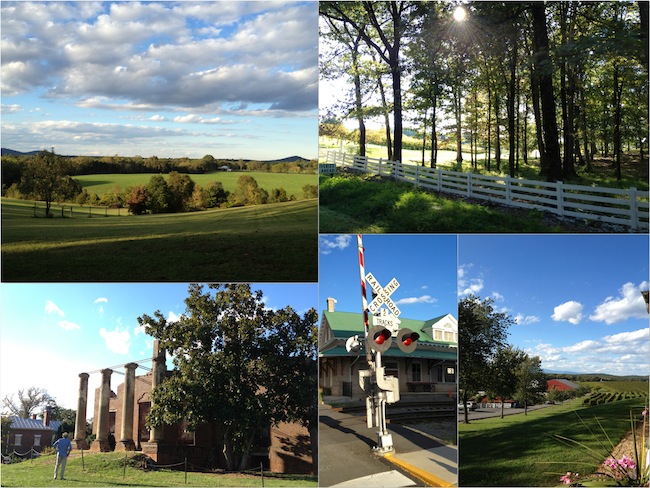 Because I can’t finish without sharing a recipe we enjoyed, I wanted to let you know that the Sturdiwheat Pancake Mix I used for one of the breakfasts I prepared was created by my brother in law’s grandfather.  Although I’ve seen him pull a package from their pantry on one of my earlier visits, I don’t think he told the story that he must think of each time he sees it — that he wanted to sell the pancake mix himself and was swayed instead to go to college, then OCS followed by a successful career in the US Navy.  His family no longer owns the company, but the mix is still produced using the method his grandfather patented so many years ago.

Here’s to good times with very special people and a breakfast that makes your stomach happy even though it’s good for you! 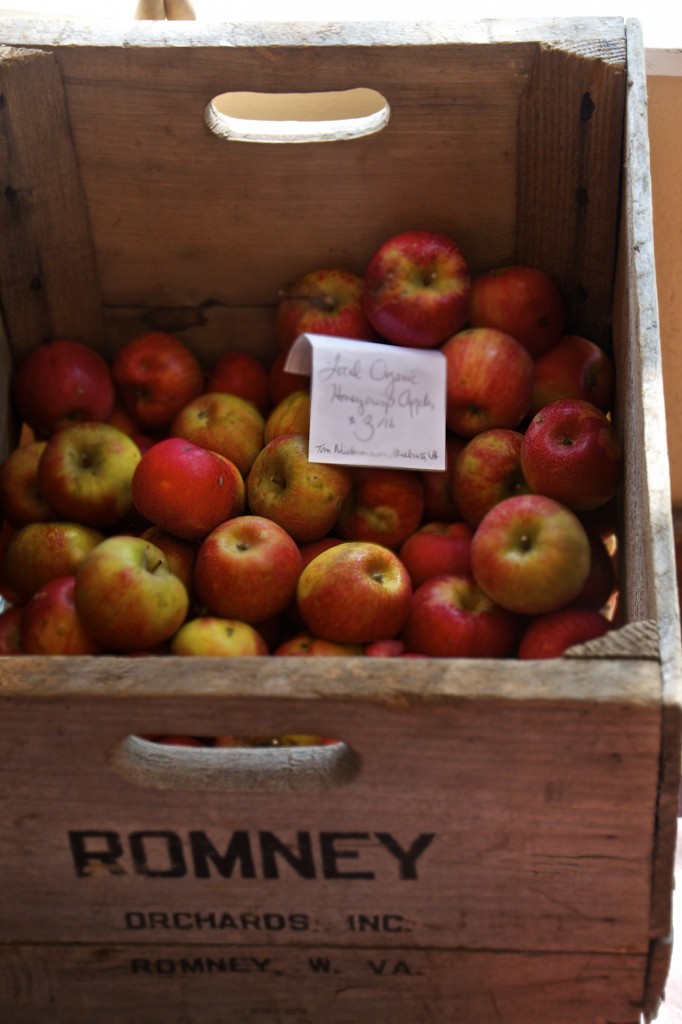 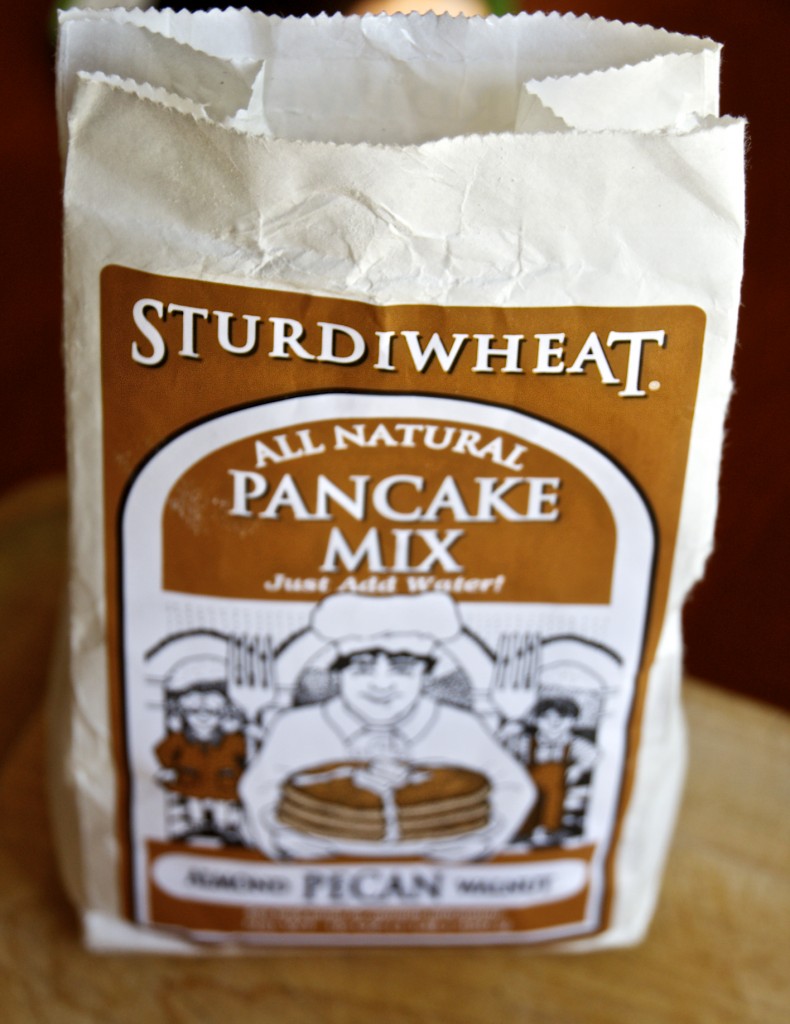 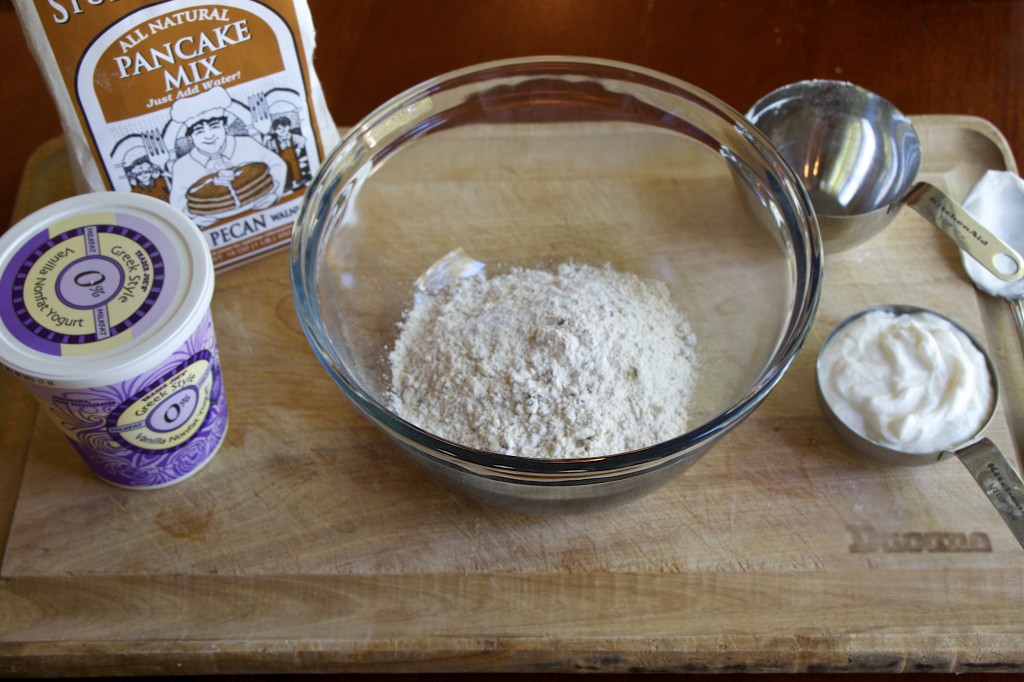 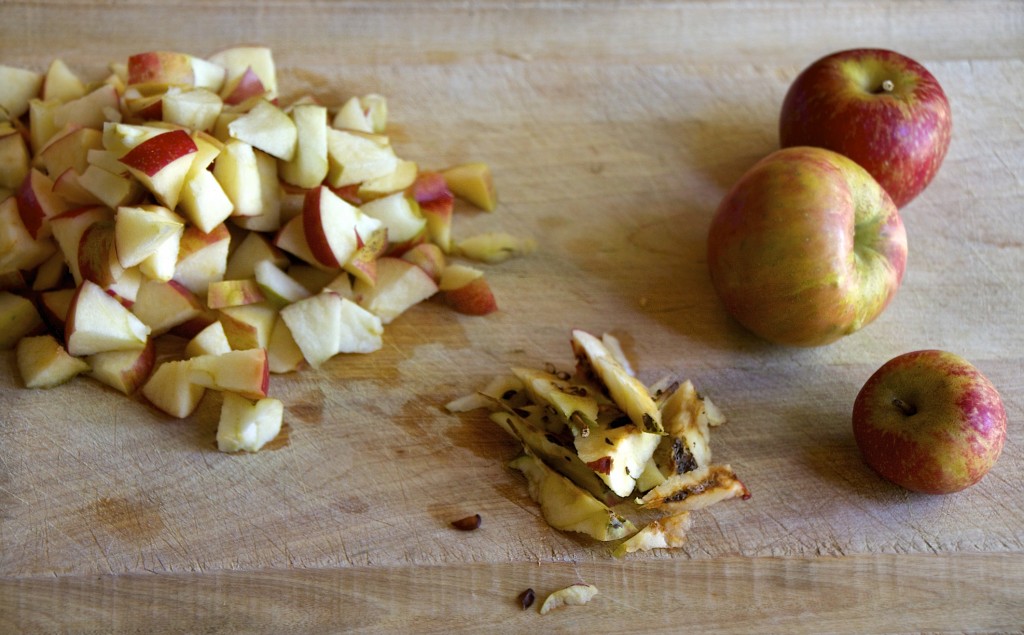 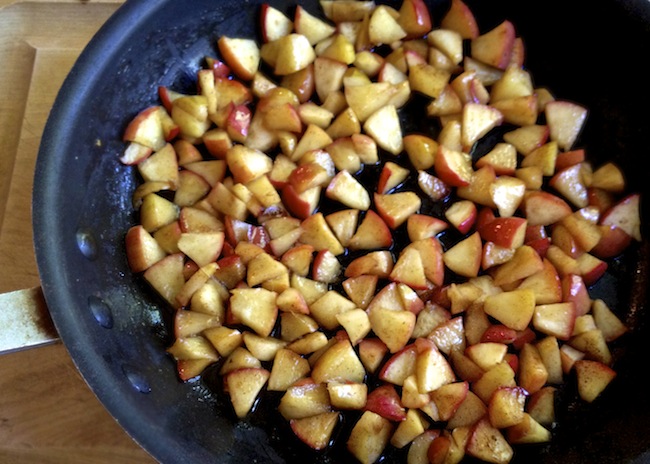 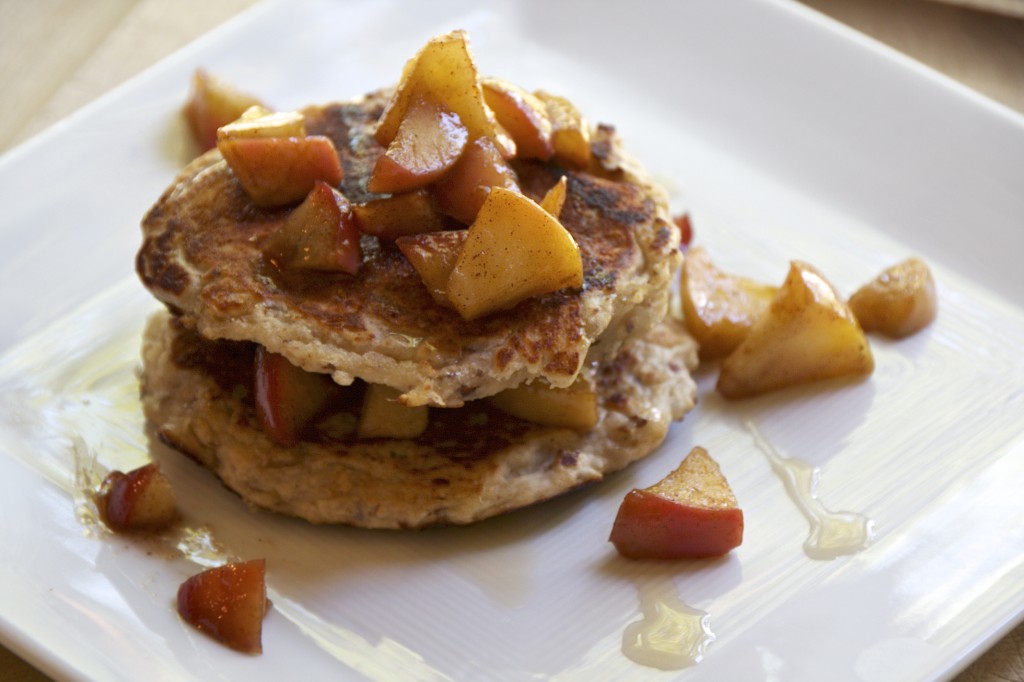