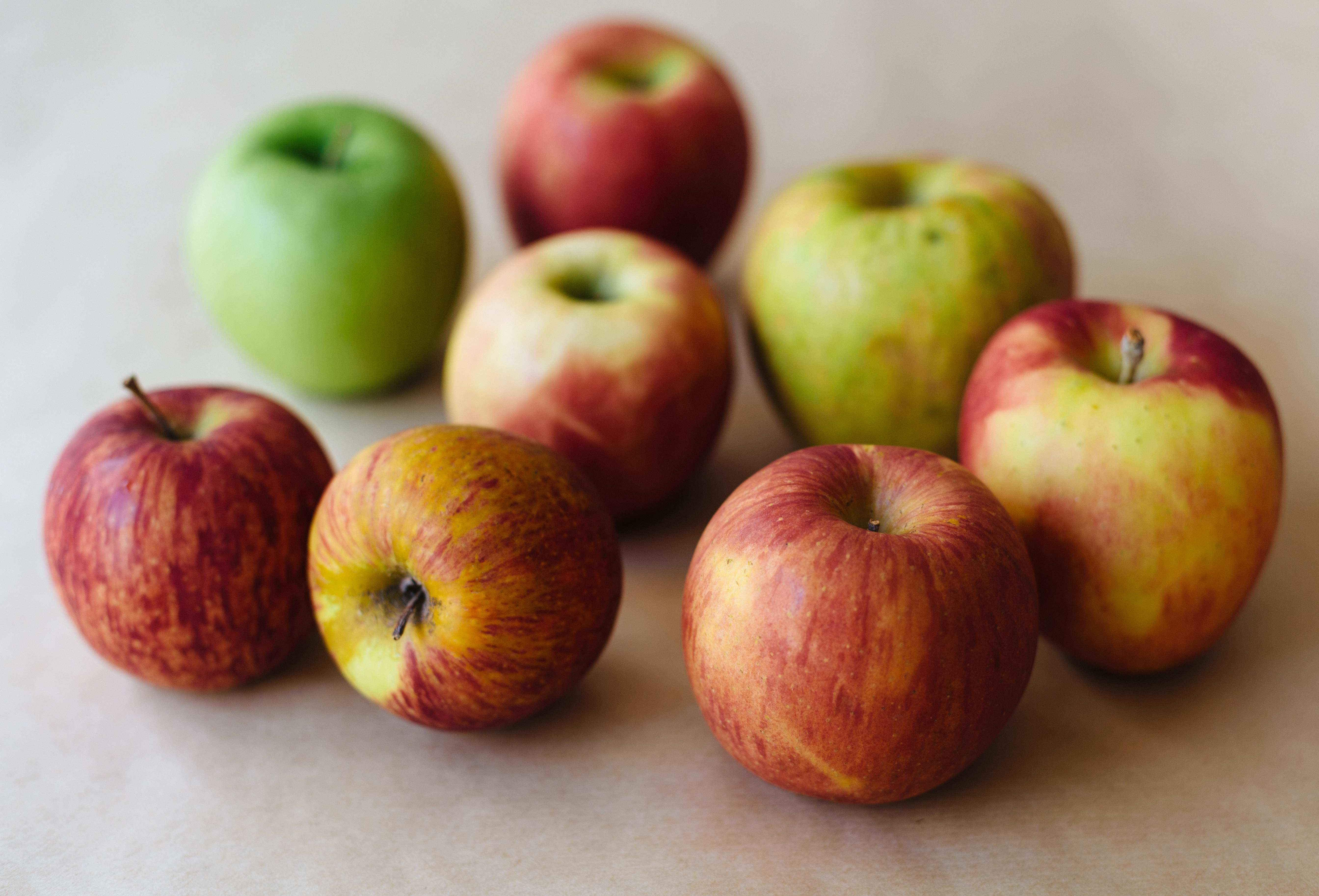 I think the first time I tried to make an apple dumpling I was about 26, give or take a year. I don’t remember cooking much during that particular time in my life, but what I did cook has stayed with me — for better or worse.  A successful pot of chili verde qualifies as one of my better accomplishments, and apple dumplings one of my worst.

At the time, my two older boys were just out of toddlerhood and I had a part time job requiring a 3 am wake up.  Several days a week, I’d fumble to quiet the huge wind-up Big Ben I kept stuffed in the lingerie drawer in my bedside table, shrug into my uniform and stumble downstairs for a hit and miss application of mascara and foundation.  I’d tip toe back up to my boys’ room and their sleepy snuffling, lifting each to carry him down to the car and buckle in for the 20-minute drive to my mother’s house.  Not quite over the river and through the woods — more like merge onto northbound I-5  and speed past the mall — but once there, I’d lift my sleepyheaded boys from the car, cross the damp lawn and try to sneak into the house to tuck them into the double bed in my old bedroom.  I always thought I might be able to make it out of the driveway before my mother knew I’d been there, but that was a rare occasion, if ever.   Usually, she met me at the door and did the tucking in honors herself because she’s like that — never quite asleep and always ready to help.  Another 15 minutes of driving would find me in the empty parking lot of the grocery store where I worked with no hint of sunlight yet beyond the mountains directly to the east.  I’d wait outside the glass door for someone to notice I was there and unlock the door for me, leave change for a cup of coffee, then head back to my area to put on my big coat and gloves to head into the freezer where I’d spend a majority of my shift.  Oh, the memories.

Clearly, sleep deprivation and that crazy routine are what kept me from the kitchen on most days!  But I did cook. 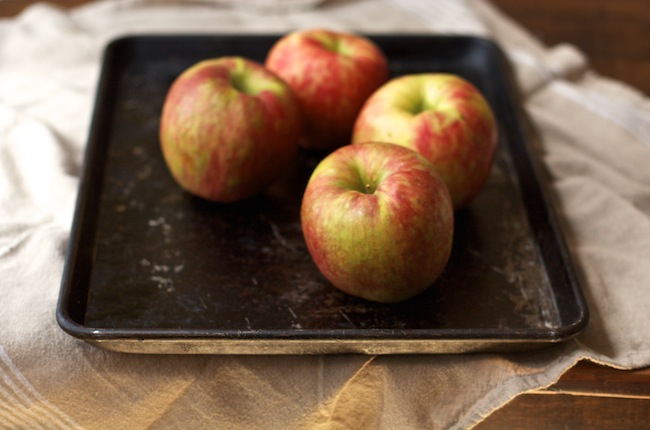 If I remember correctly, the first time an apple dumpling caught my eye, it was in Good Housekeeping.  Or was it The Ladies’ Home Journal?  Regardless, I thought, How cute!  Sure, I can make that.  Generally, I feel that way about most things in life, so what’s an apple dumpling?  Pie crust.  Some mixed nuts and fruit.  An apple.

Evidently, an apple dumpling was beyond me then, because my effort was a colossal failure.  Think rock hard apple, soggy crust, and nowhere near anyone’s idea of the perfect bite of spicy apple goodness, and you’d have it just about right.  I think they hit the trash.  There was no attempt to give them a second chance by chopping and putting them in the skillet with a bit of this and that.

Recently,  I saw some enormous Honeycrisp apples at the market, and I thought apple dumplings, because everyone does, right?  Perhaps not, but I bought four Honeycrisp apples that day — which is ridiculous because each weighed more than 10 oz. and there are only two of us, so clearly, I’d have to have something beyond apple dumplings in mind.  Eating them raw?  What a concept.  I have to say, Honeycrisp are probably the best apple I’ve enjoyed just taking a bite of.  They’re sweet, and so crisp they snap as you bite into them. 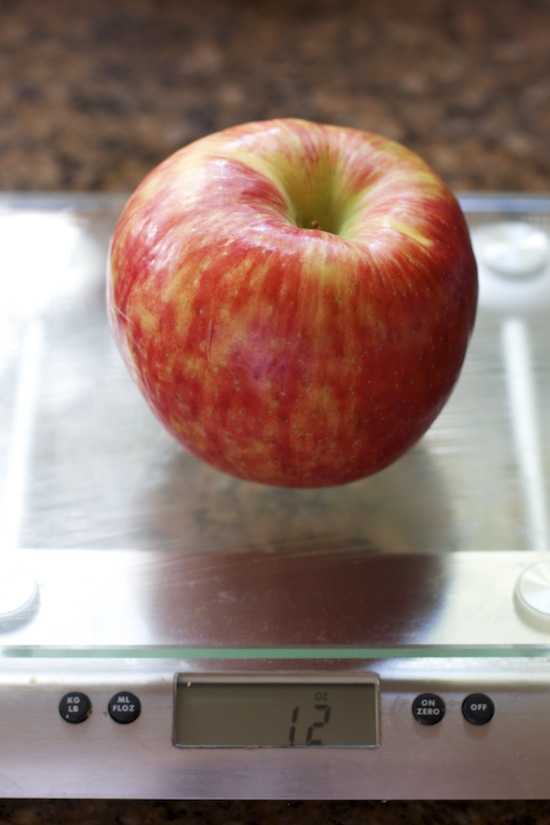 But would they hold up in a good old fashioned baked dessert?  One made entirely from scratch and with ingredients as wholesome as possible?  One that if you only baked one special dessert to celebrate the arrival of Fall and be completely satisfied with the effort? 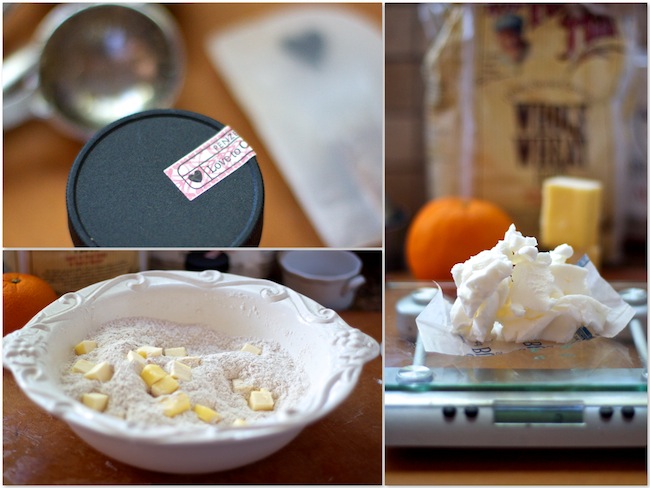 And the dough is really not fussy at all.  No need to do anything but pinch the butter and shortening into the dry ingredients — which includes some cinnamon. 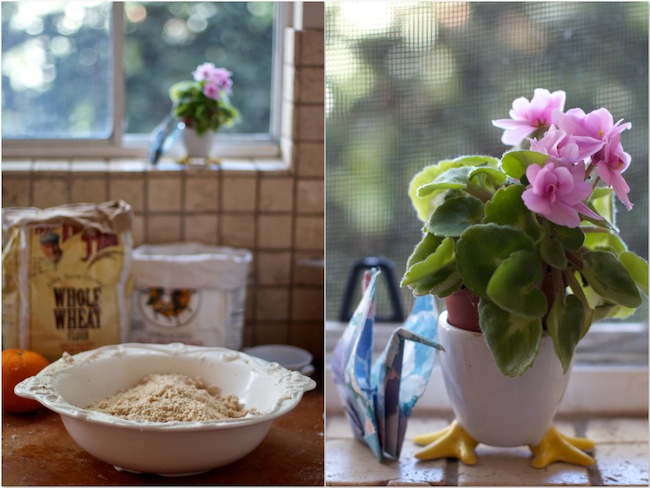 It only takes a minute or two to pinch the ingredients into fine crumbles that look a bit like oatmeal.  When you dig your open hands under the crumbles and lift, they should fall easily between your fingers. 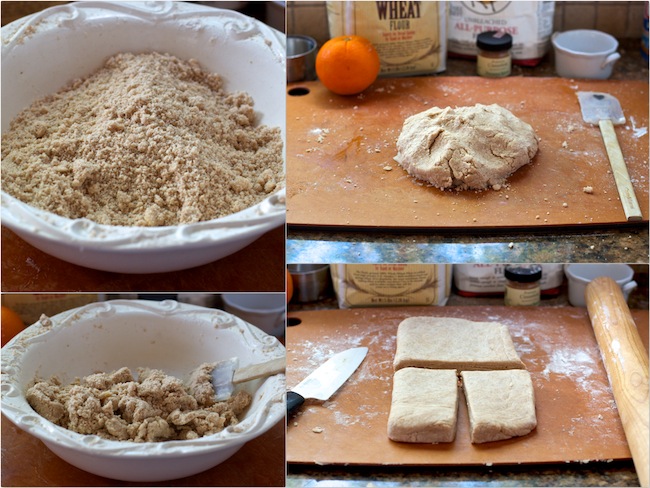 See?  Look at those crumbles.  Easy peasy.  When you pour the cool water into the mix, just toss it around to get it moist and you’ll see big clumps begin to form.  Pour it onto a lightly floured board and press it together into a crude ball before pressing it down and rolling it into a thick rectangle you can cut into quarters.  I only made two apple dumplings, so saved the rest of the dough. 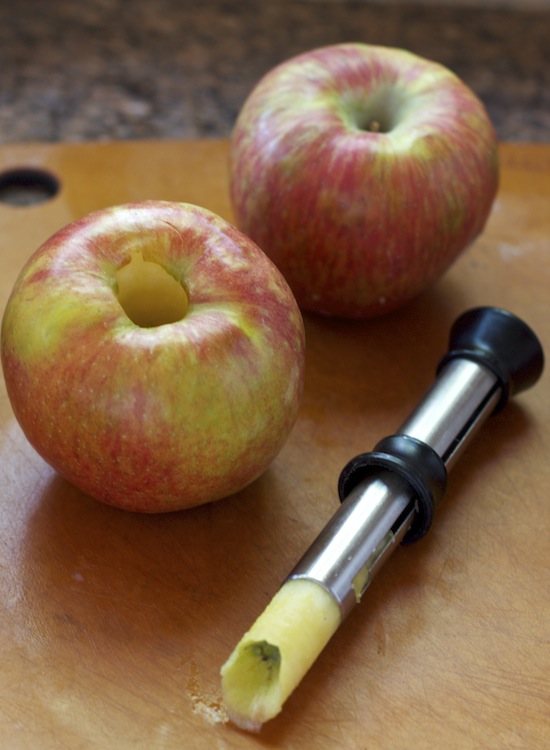 Do you have an apple corer?  They’re pretty handy kitchen tools.  I got mine at a Pampered Chef party years ago and it’s pretty easy to use.  But this Cuisipro Apple Corer

looks like it would be more comfortable.  Either way, an apple corer saves you from having to use an old fashioned potato peeler (did you know that’s why they’re curved? — for coring apples!) or a paring knife.  Both take a bit more effort, but will get the job done. 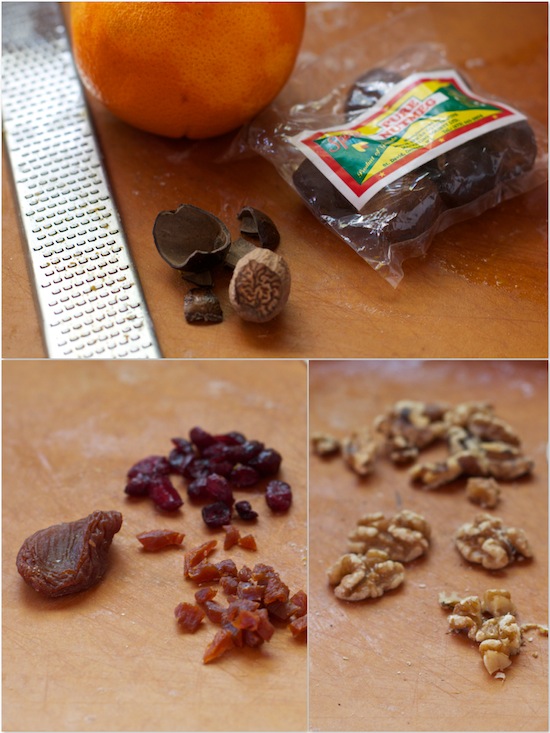 To make the filling you’ll need some dark brown sugar, cinnamon, an orange to grate zest from, some dried apricots — about a half of one per apple, some dried cranberries, and some walnuts.  If you don’t like walnuts, then pecans are just as good, but I treated myself to the walnuts and warned my husband before he cut into his dumplings.  Walnuts and apples are a match made in heaven if you ask me.  If you don’t have the cranberries and apricots, then use raisins or currants.  Dried cherries would also be very nice.  I used the nutmeg my good friend brought back from a trip to the Spice Islands.  I’d never seen it in its shell before, so had to give it a whack with my rolling pin to get the nutmeg out.  What a heavenly scent freshly grated nutmeg has… 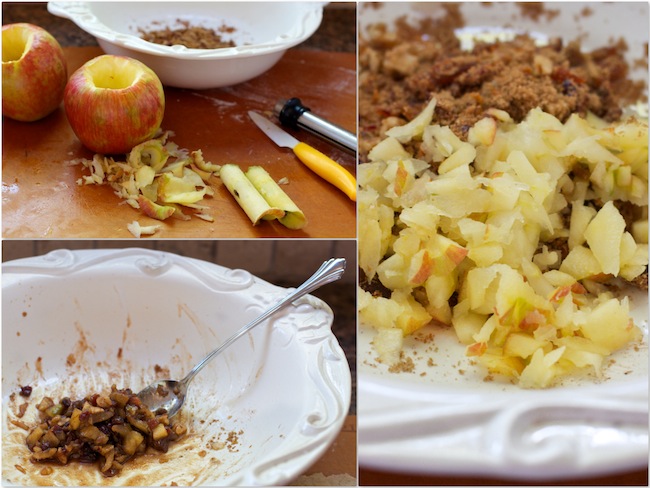 You’ll need to widen the openings of the apples as well but don’t throw those pieces out.  Toss them in with the other filling ingredients and they’ll help make a nice juice. Don’t fill the apples quite yet because you’ll need to roll out the dough for each apple dumpling first. 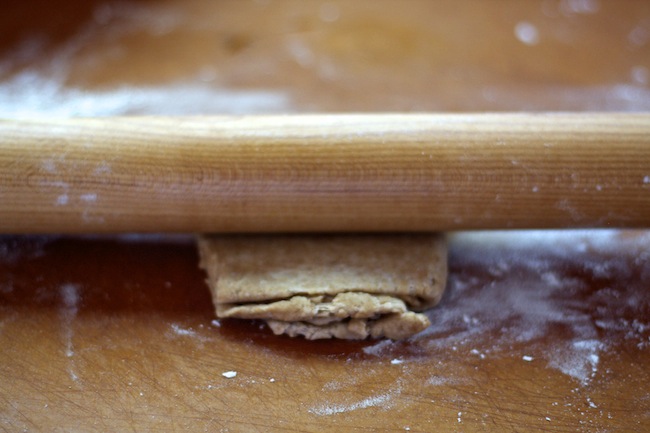 Give each quarter of dough you’re making a few turns with the rolling pin to make a square large enough for each apple dumpling. 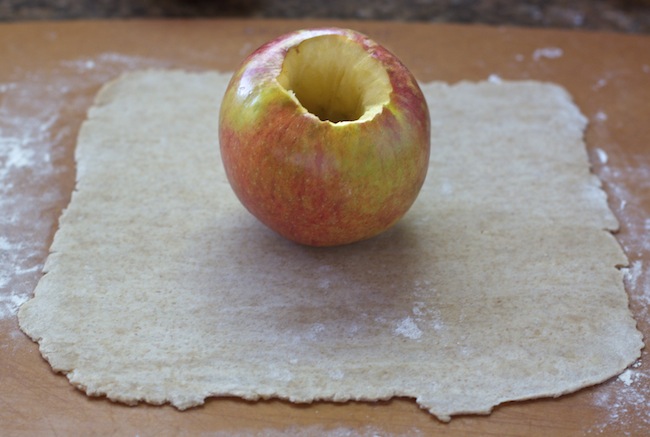 Each corner of the dough needs to be able to reach up and over that apple. 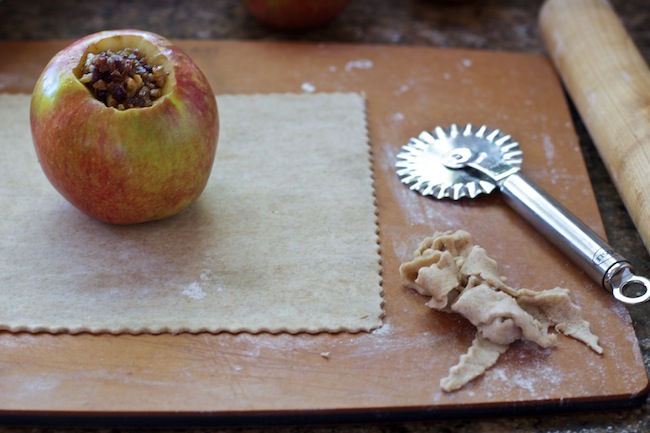 Once you’re sure the square is the right size for your apple, you can fill the apple, and if you want, trim the edges of the dough with a fluted wheeled pastry cutter

.  It makes a pretty edge and gets the job done quick.  Save the scraps so you can roll them out for leaf cut outs if you want to decorate the apple dumplings. 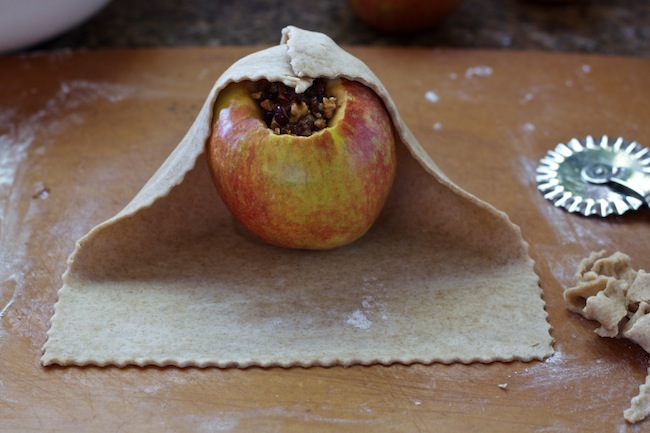 To wrap the apples, bring up one corner at a time and dab a bit of water on the corners to help them stick together. 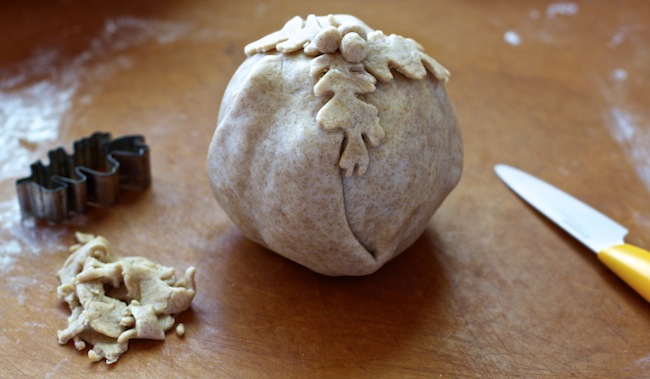 Before you add the leaf decorations, cup your hands around the dough covered apple and gently press to flatten the folds.  If you want, you can also brush a bit of water in the folds to help them stick, but I didn’t.  They’re pretty secure. 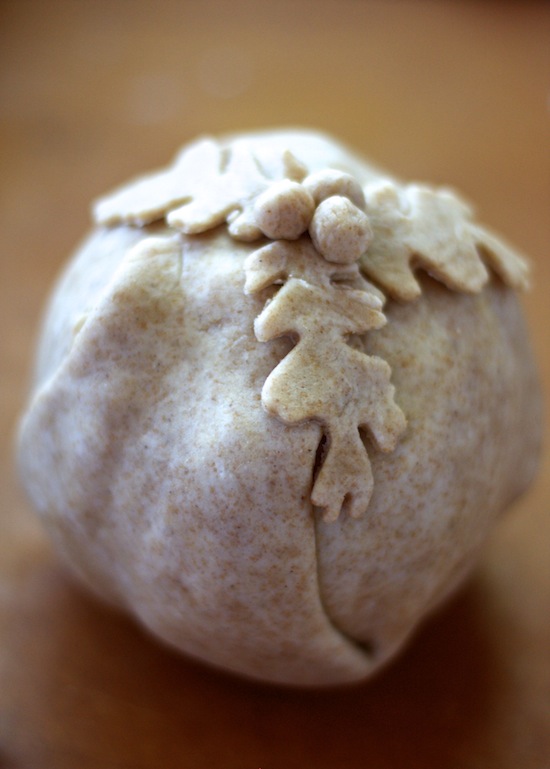 Dab a bit of water on the dough to stick the leaf cut outs on and if you want, roll a bit of dough between your fingers to create some nuts.  With the edge of a butter knife, press a vein into the leaves if you want for a bit of detail. 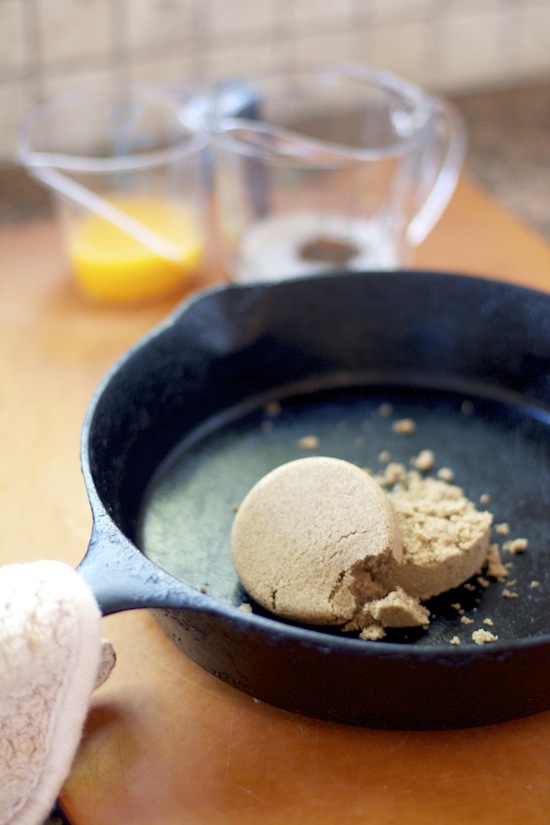 To make the basting sauce for the apple dumplings, you’ll need to brown some butter, filter it to get the dark pieces left in the bottom of the pan out, then mix it in a skillet with some brown sugar and freshly squeezed orange juice from the one you zested for the filling.  It only needs to be heated long enough to get the sugar to dissolve. 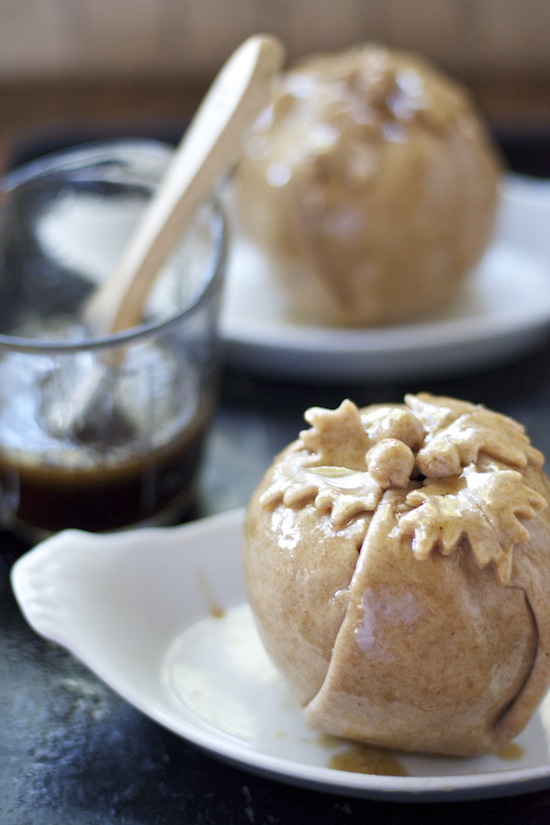 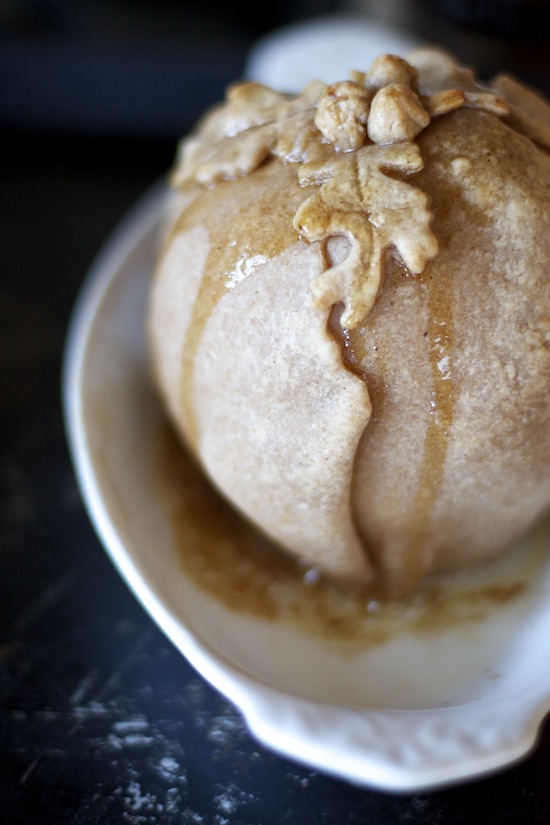 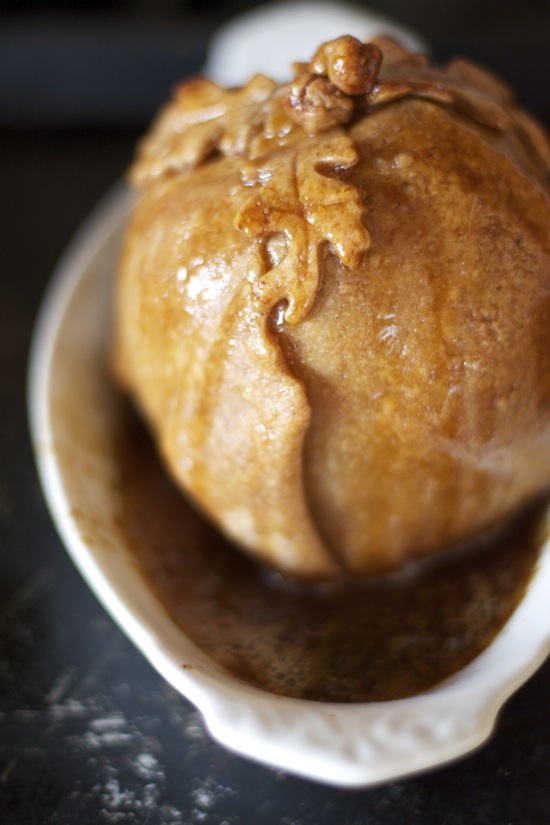 Depending on the size of your apples, the baking time will vary.  Mine needed an additional 10 minutes.  Notice that gorgeous sauce that has pooled in the dish as the apple dumplings have baked? To make sure they’re done, use a wooden skewer to test by inserting down through the apple making sure you aren’t in the core where the filling is. 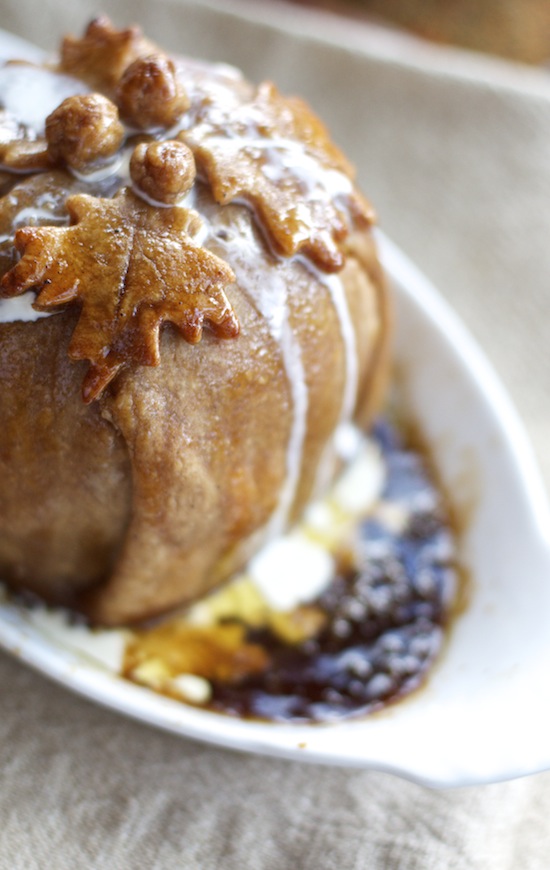 Let them cool about 10 minutes and if you’d like pour a bit of cream over the top.  It will mingle with  the sauce in the bottom of the dish and it makes a lovely caramel like flavor to enjoy your apple dumpling with. 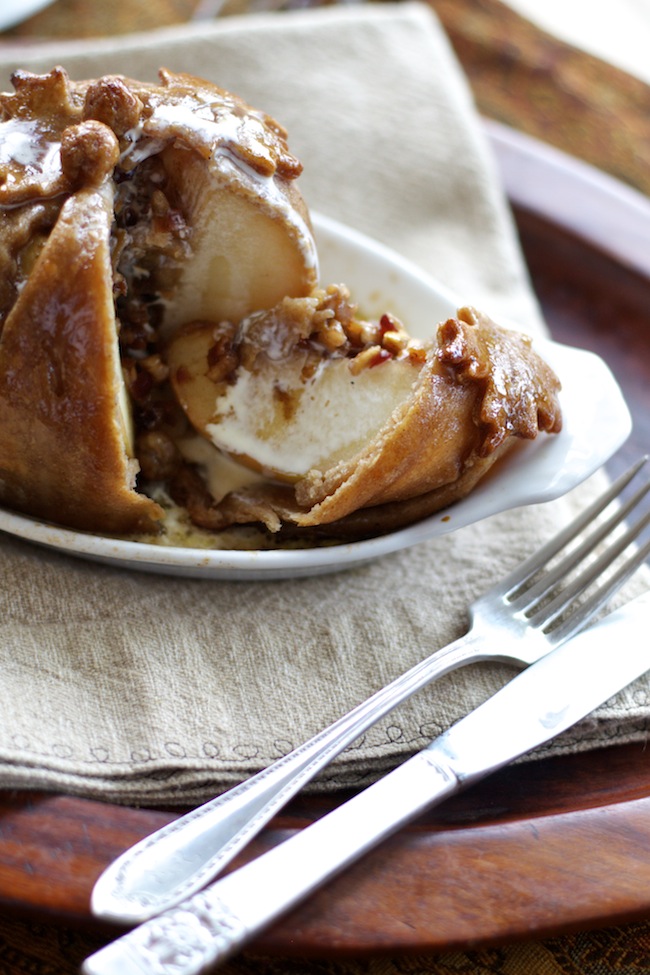 You can cut right into the apple dumplings just like you would a pie.  The Honeycrisp apples have held up perfectly! 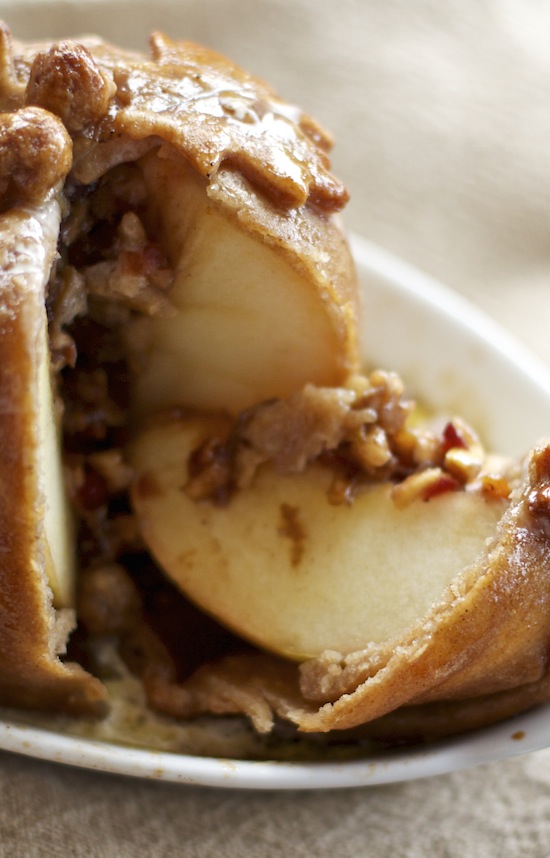 The combination of the apple, filling, crust, and that heavenly orange scented sweet brown butter sauce is truly excellent. Fork tender, too! 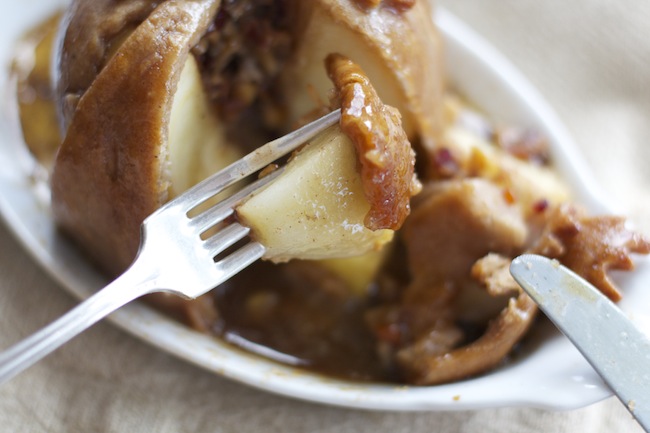 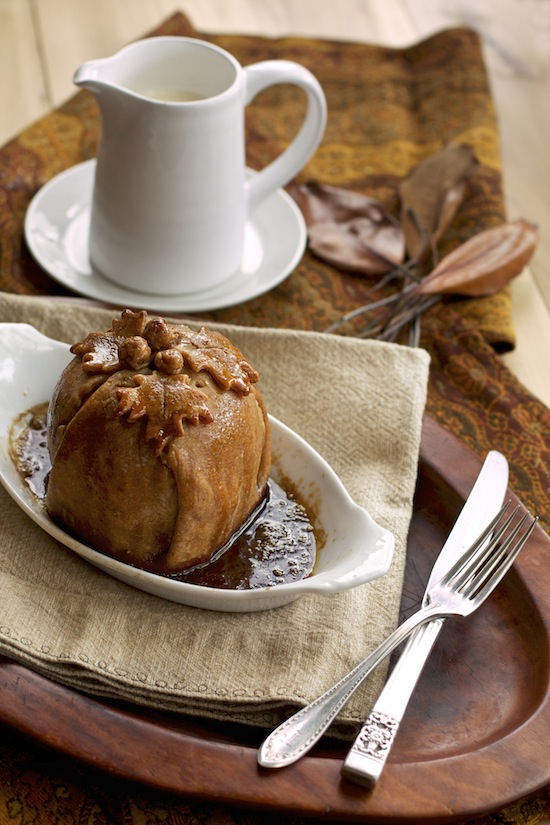 More Apple Dumpling Recipes from Around the Web

(Who knew there could be so many different ways to make an apple dumpling!)