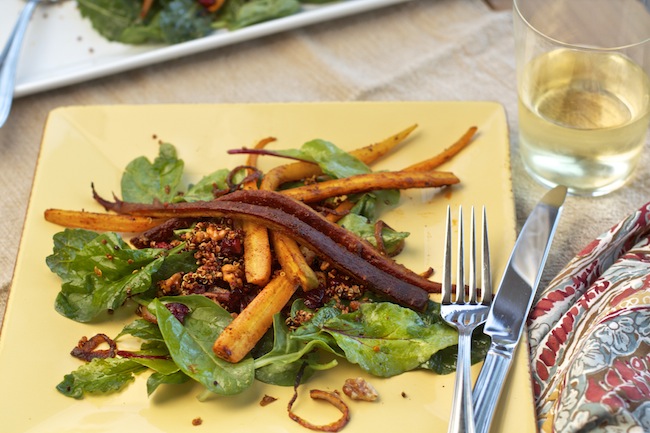 Sometimes when I’m at the market, I come across bags of brightly colored carrots — carrots in a deep burgundy and cheerful yellow nestled with the expected orange.  Once in a while there are a few  very pale yellow carrots in the mix as well, but the burgundies are what I think most striking.  Once sliced the rich, dark tone of the exterior rings the brighter orange in the center.  I can’t resist them when I see them simply because they’re beautiful.

I begin to think about what I might make with them as I add them to my basket, remembering that in past experiences I’ve been disappointed to find that when peeled — especially the dark ones — the beautiful color goes with the peelings.  Or when put into something braised, the color dissipates in the cooking liquid.  Such is the life of someone who not only enjoys food for its flavor and nutritional value (or lack thereof from time to time), but for its innate beauty.  It’s all a bit like taking time to smell the flowers so to speak.  Appreciate the small things in life which are easily unrecognized if — as in the example of these carrots — one always grabs the bag of tiny already peeled baby carrots.

Go ahead.  Call me silly.

No, these beauties were destined for the perfect recipe — one I’d seen in Food & Wine and tagged immediately.   I love quinoa and couldn’t resist the blend of spices in the recipe that would go fabulously with the roasted carrots and some dark, leafy greens.

First, peel the carrots lightly — or maybe you’re someone who just gives them a good scrub with a veggie brush.  I don’t like the bitter taste of the peelings, but maybe it’s my imagination.  I eat peelings on just about everything except carrots. 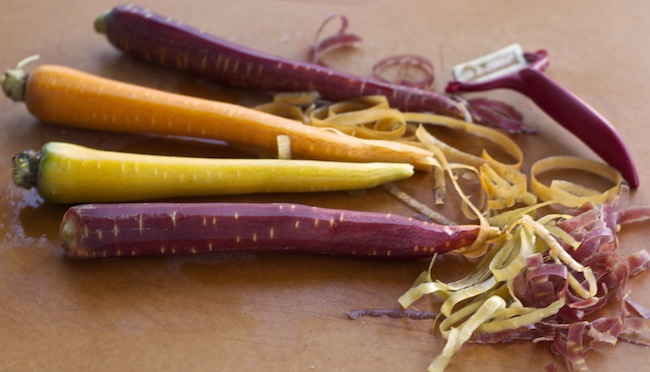 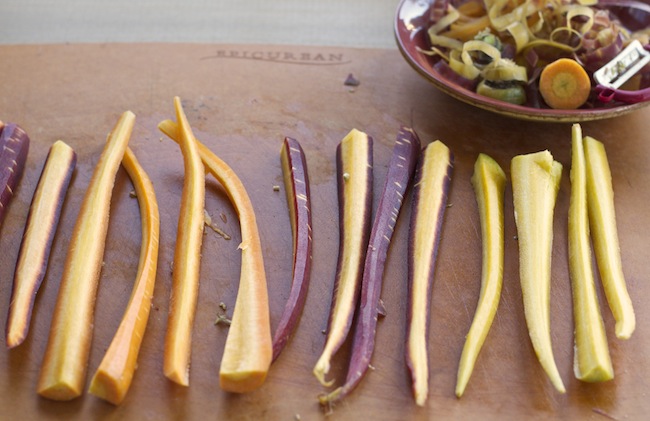 After you peel the carrots, split them down the center, then quarter them.  Some may need another cut to even the pieces out. 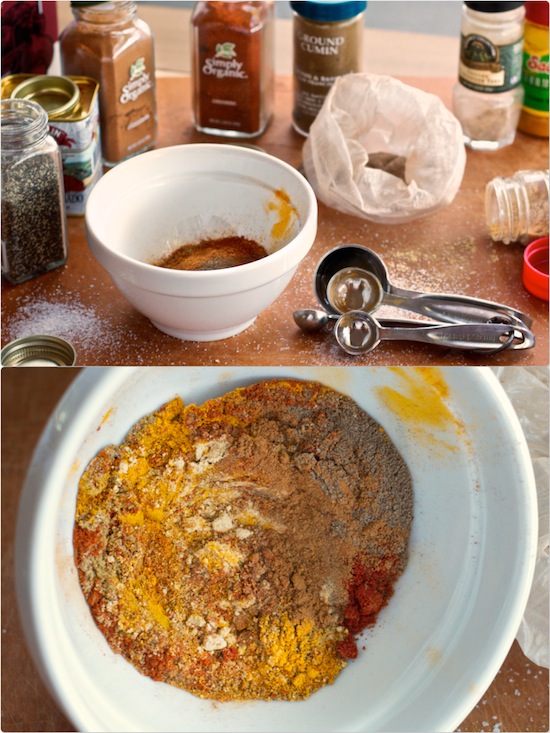 This is the part where it pays off to have all the spices on hand a recipe like this calls for.  The aroma is heavenly, and the mix of color so beautiful. 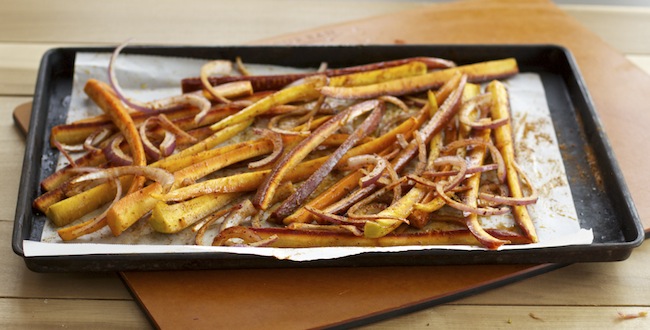 The carrots are tossed in a bit of olive oil and a portion of the blended spices.  Sliced red onions are added to roast at 400 degrees F for about 20 minutes, tossing the mix once or twice during the baking time. 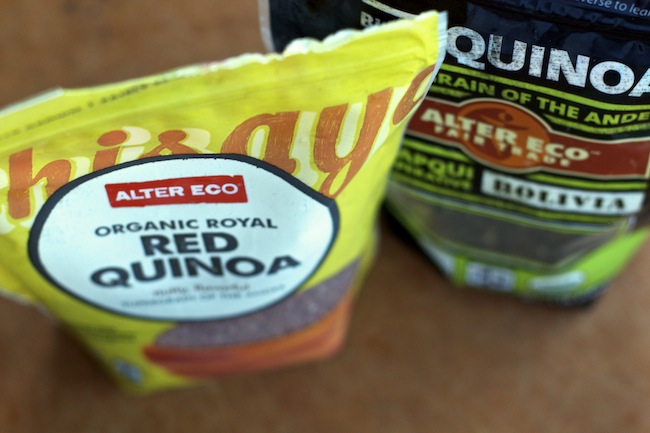 I thought both red and black quinoa would look attractive with the colorful carrots. 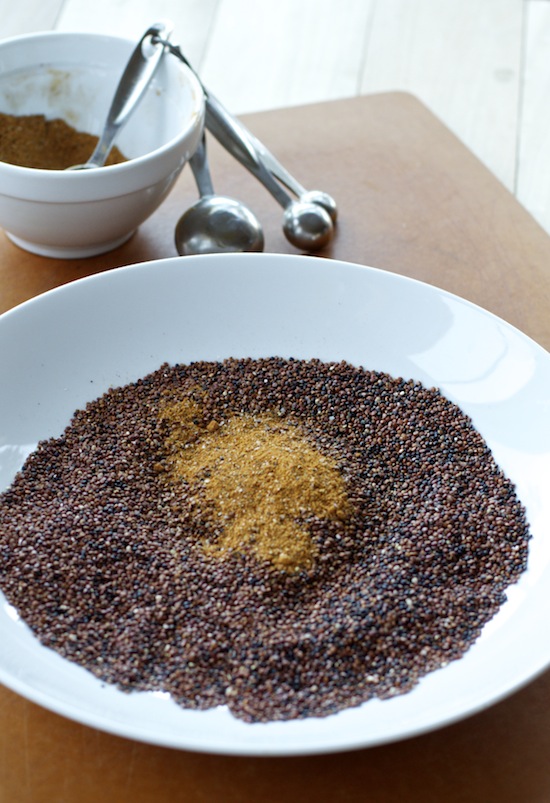 Another portion of the spice blend is mixed in with the quinoa before cooking. 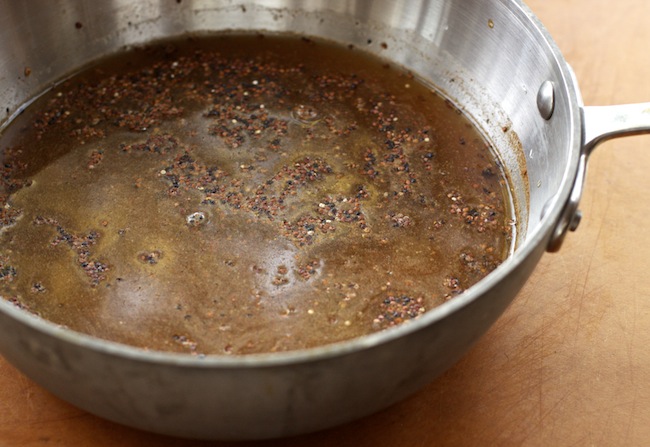 Water is added to the quinoa and spices and cooked until all the liquid has been absorbed.  You’ll have to check it occasionally and stir a bit to make sure it’s cooking steadily.  It will take about 20 minutes at most. 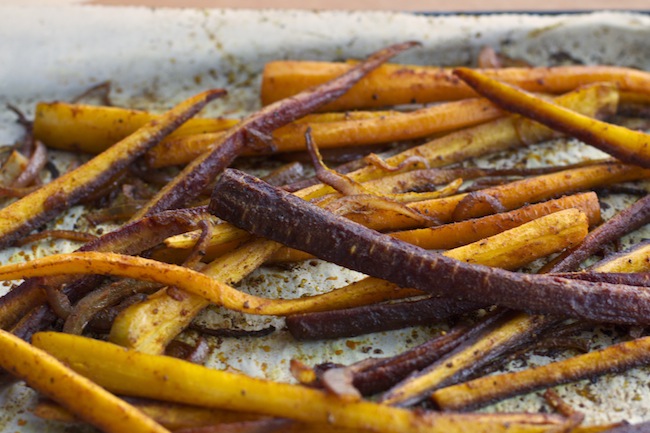 The carrots and onions smell so good when they’re roasting.  When they’re finished, just set them aside to cool down while you finish making the rest of the salad. 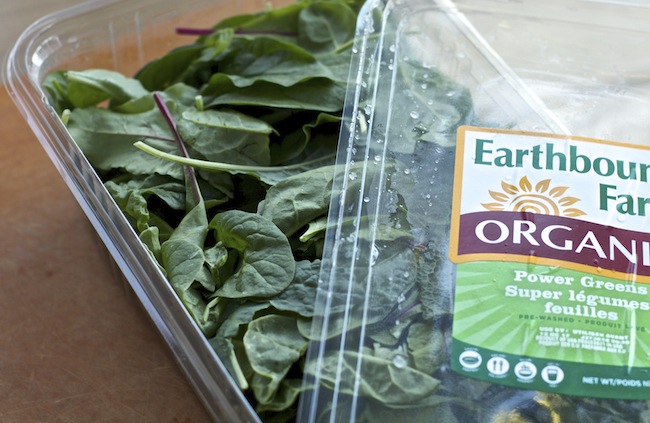 I like to buy big packages of a mixture of spinach and baby kale because it comes in so handy for salads or any other way I’d like to use it.  The greens are very tender and packed with so many nutrients your body will thank you for.  I used several large handfuls for this salad. 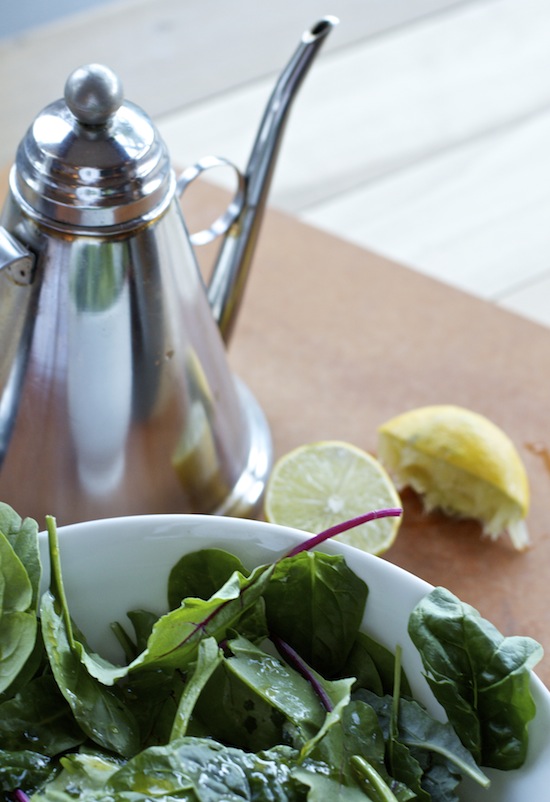 The greens are tossed first with a bit of lime juice and extra virgin olive oil.  You can season lightly with salt and pepper if you like, but there will be seasoning in the other parts of the salad as well.  I always toss my greens in a bowl separately before I decide whether I’m going to plate the entire salad, or portion them out separately.  It depends… 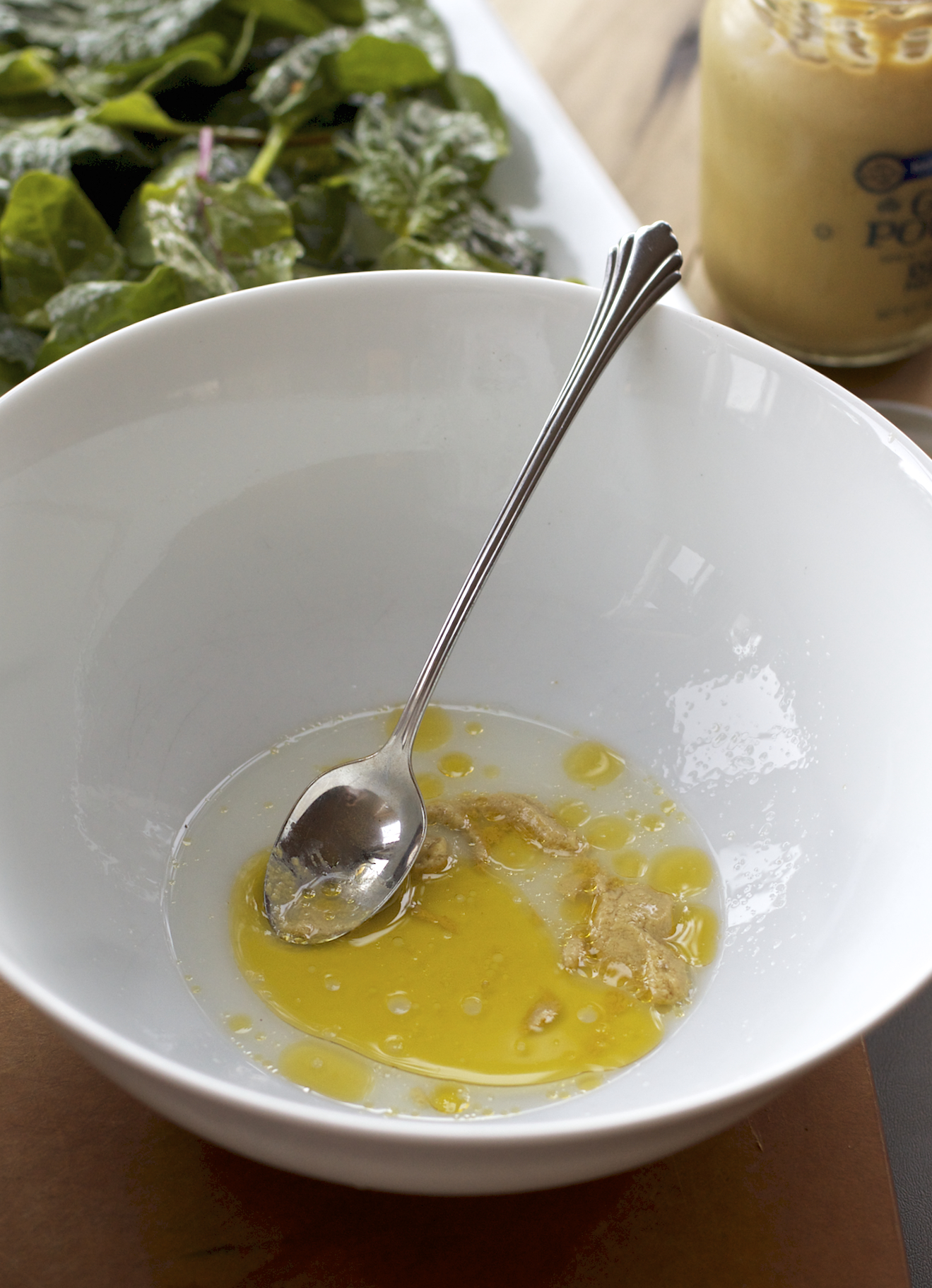 Then a dressing for the quinoa and other ingredients is made with lime juice, mustard, and some of the remaining spice mix that was used for the carrots and quinoa. 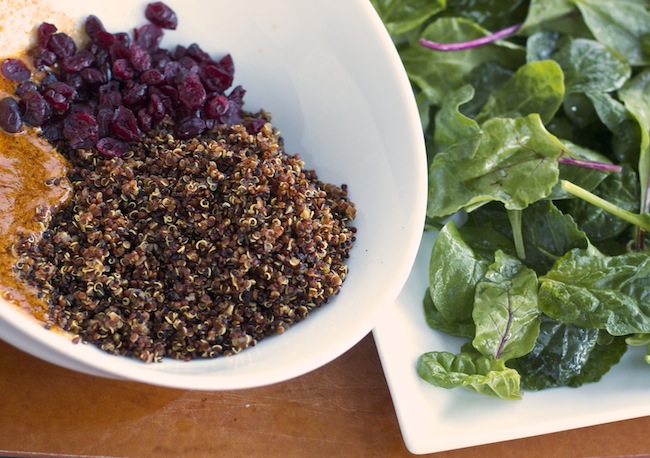 The dressing is added to the cooked quinoa and dried cranberries are mixed in.  Aren’t the colors beautiful?  I love this salad!  Spoon the quinoa mixture over the greens… 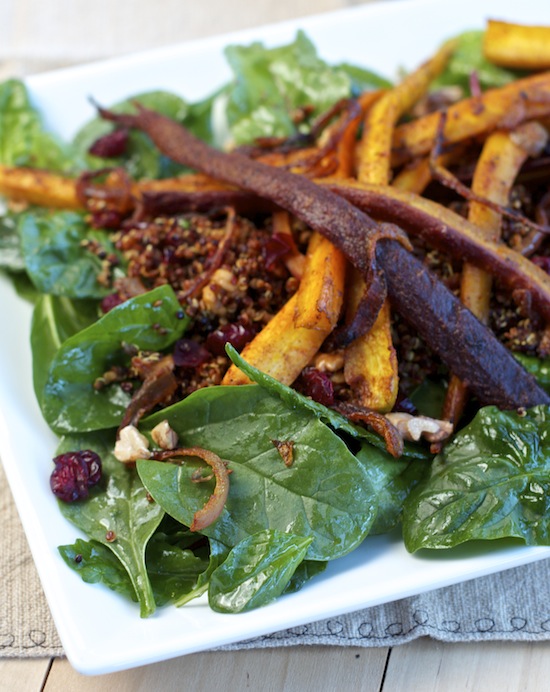 …then layer the spicy roasted carrots over the quinoa.  Toasted walnuts finish the salad.  I’m hungry for it all over again just looking at it!  It’s sweet and spicy, crunchy and refreshing.  I enjoyed mine by myself because the hubster was working late, so I had time to mull over the color and flavor of everything wondering what he’d think when he got home.

It kept quite nicely at room temperature covered with plastic.  In fact, there was too much for the two of us for dinner, so I was able to enjoy the rest the next day for lunch.  Delicious. 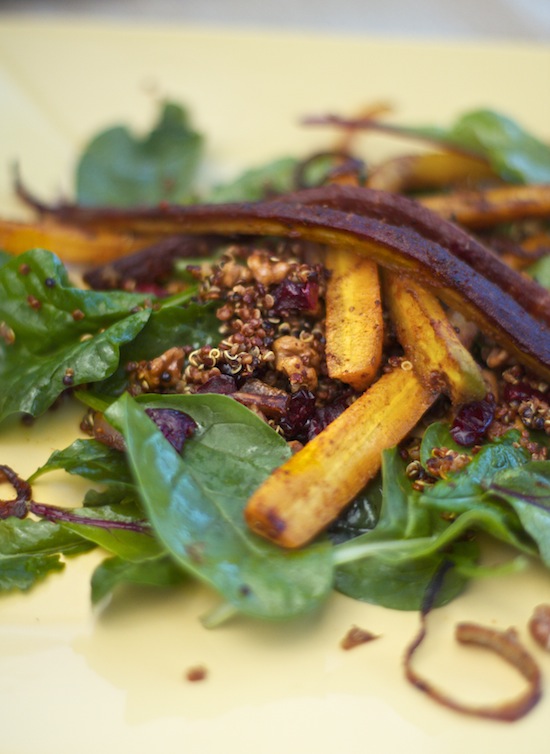